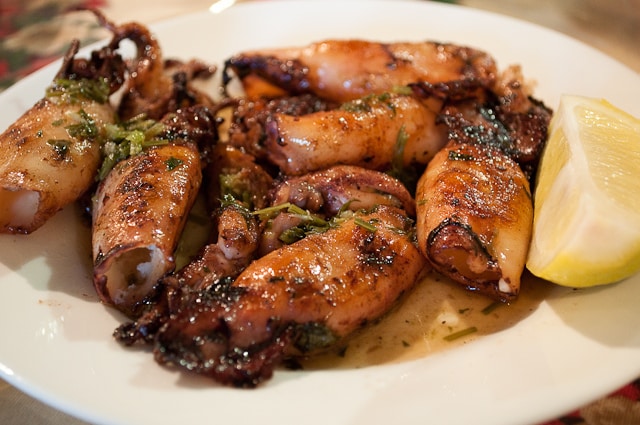 When I first visited the largest of the Canary Islands about three years ago I wasn’t terribly excited by the food on offer in many of Tenerife’s restaurants. It seemed Canarian and Spanish fare had given way to international menus of bland, unimaginative restaurant fodder.

On a subsequent visit I was delighted to discover that Canarian cuisine stretched beyond the humble papas arrugadas and green and red mojo sauce, but it all seemed a matter of having to hunt out some great Tenerife restaurants with tasty local food. So on our last visit we decided – it was time to bring in the big guns and ask some of our friends on the island to take us to their favourite restaurant.

City girl Aranxta Ros of Travel Experiences took us to La Posada in the island’s capital, Santa Cruz. Here we dined on the restaurant’s modern tapas menu with fine Serrano ham (Arantxa’s particular favourite: “It’s just the best! I was vegetarian for a while, but for jamon Serrano I made allowances,” she giggled), bruschetta with tuna and avocado tartar and squid with garlic mayonnaise, and eggs mixed with peppers and onions, all served with a tasty local red, Resalso. We followed it up with fig ice cream with chocolate sauce and a delicious toffee cheesecake. Take a look at our meal here…

A couple of days later we built up a hearty appetite while trudging through the Cueva del Viento, part of the island’s network of lava tubes, then trundled down to the pretty little town of Garachico, a 15 minute drive away, to meet Jack and Andrea Montgomery of insightful Canaries publication Tenerife Magazine.

Unfortunately an extended tour of the lava tubes and the fact that signposting on Tenerife can leave a bit to be desired, meant we were quite late for lunch with the Montgomerys and their first choice of restaurant in what was once the island’s wealthiest town was closed. But Garachico it seems is rich in delicious alternatives and we ended up at Los Piños, a restaurant serving a traditional selection of tapas.

Here in the cosy interior we feasted on boquerones – vinegar marinated anchovies, fried squid, Russian salad (although the uncharacteristically measly serving of potato and fish salad surprised us all), delicious local sausages called chistorras and chiperones – tasty pan-fried baby squid. Luckily for us, Andrea was on hand to ensure we didn’t try chewing our way through the chiperones’ natural plasticky ink cartridges…

We had dinner with Arantxa, Jack and Andrea while staying at Pearly Grey Ocean Club.

The Living Nativity recreates Bethlehem in Spain
What is shared holiday ownership?