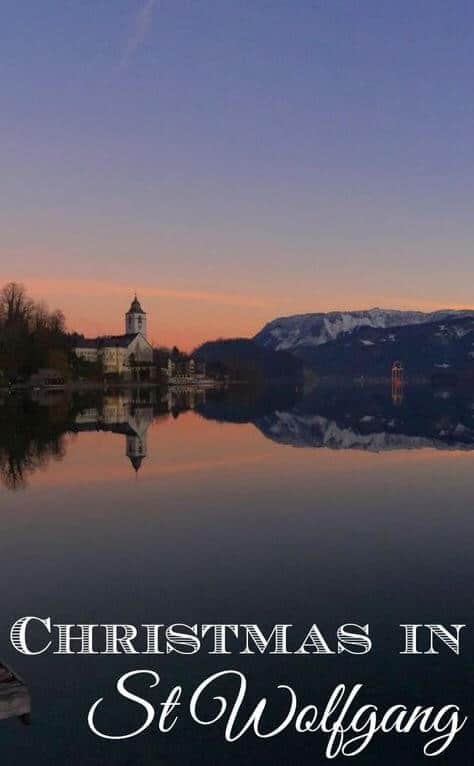 This is part one of two features on Christmas in Salzburg and the surrounding region. Read about Christmas in the heart of Salzburg.

Following a few days warming up to the festive season in Vienna, we were promised the most Christmassy time of all in and around St Wolfgang, Salzburg.

Salzburg is more than just a city, it has given its name to a whole region, and as we crossed the border into Salzburgerland after winding our way there from the Danube and Lower Austria, we knew we were in for a seasonal treat. 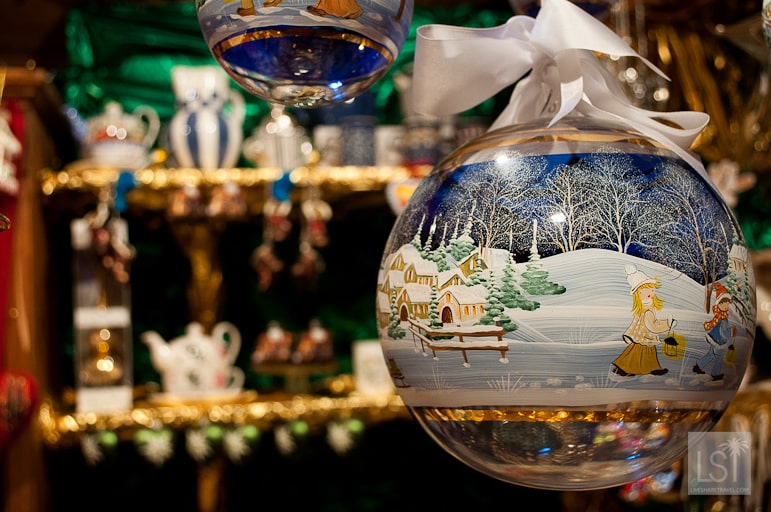 St Wolfgang is famed as Austria’s advent town – the most festive place in the whole country. And that’s some boast. Alongside Germany, Austria has some of the most popular Christmas markets in the world and Salzburg and Innsbruck are thought to be the most spectacular. So I was eager to see just what made St Wolfgang special.

Arriving into the town that evening the reputation became immediately evident. The town was thronging with people at St Wolfgang’s advent market. 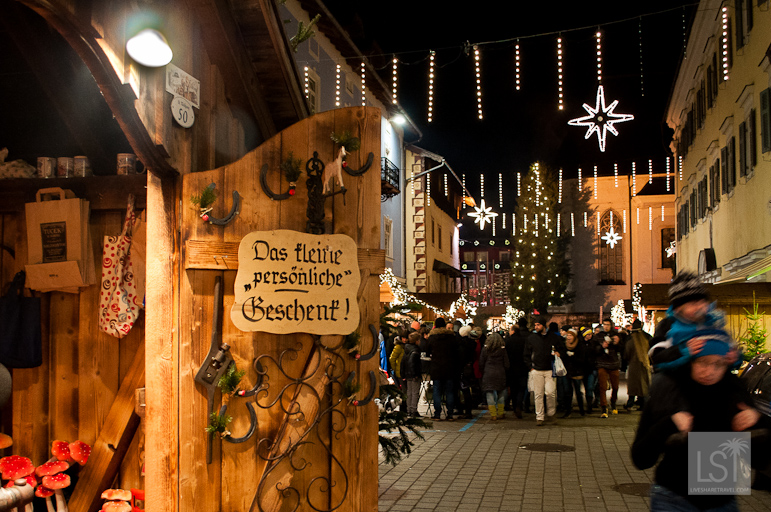 The market is held throughout the town and festive stalls have artisanal goods and traditional foods including gluhwein and chestnuts, yes, really – roasting on an open fire. And with a striking, if slightly spooky, life-sized nativity scene, it just couldn’t get more seasonal and is a perfect way to spend the weekends leading up to the big day. 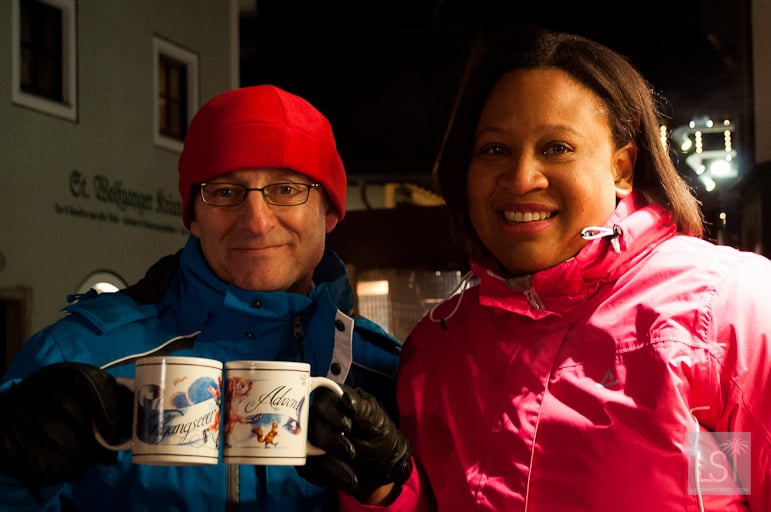 Christmas on the water

At dinner at our hotel, the five-star Weisses Rössl, we had more festive foods besides St Wolfgang’s piece de resistance. The town sits on the shores of a lake, so broad, so still, so spectacularly beautiful that it almost defies description – but it would be wrong not to at least try.

Set against a backdrop of towering mountain peaks the lake’s surface is sheet glass, reflecting all of nature’s wonder. It’s a perfect reflection, only ever so slightly broken by a very occasional boat, the elegant sway of a swan or bobbing head of a moorhen coasting across the water.

This natural wonder is enhanced during advent evenings in St Wolfgang when the lake is lit by a giant lantern and golden stars. They could so easily be tacky, perhaps it sounds a little kitsch, but they’re the most charming Christmas lights I’ve ever seen. And from Hotel Weisses Rössl, sat on the very edge of the lake, you have the best view in town. 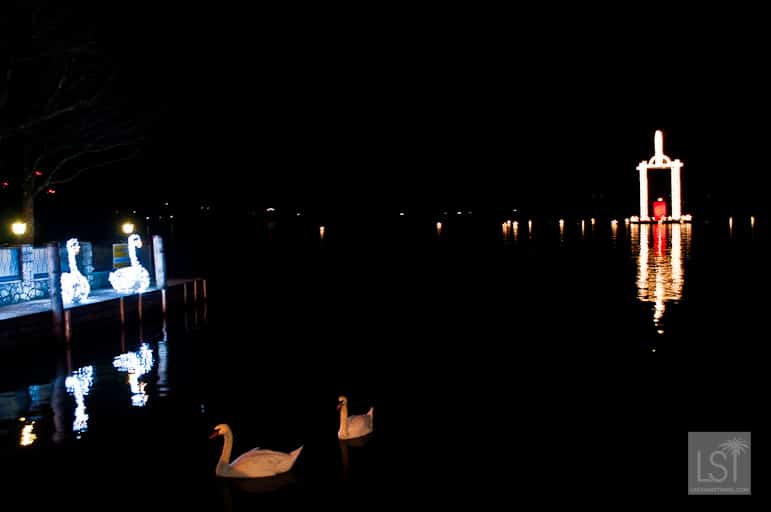 Spa by the lake

After a restful night’s sleep, we woke to the lake’s glory. From our balcony, a chocolate box scene unfolded under bright blue skies and we were able to see the hotel’s steaming hot swimming pool located right there in the lake. We made our plans for the day, largely dictated by treatments we had booked at the spa, and decided to make a spa day of it.

Following an excellent super peel facial and Terry’s men’s facial and massage we joined our friend Katrina, of Tour Absurd poolside. Yes, air temperatures were close to freezing, but once we were in the pool, taking in the wonder of Lake Wolfgang, we barely noticed. 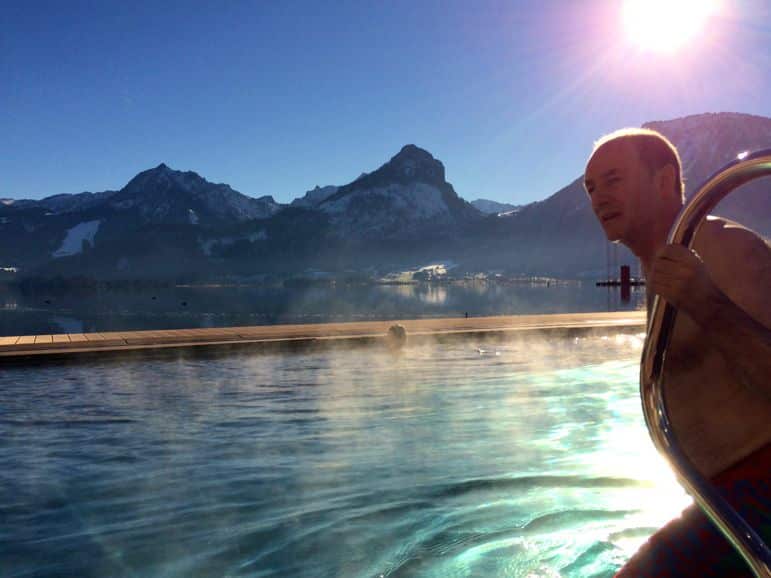 What we couldn’t help but notice, however, were the glorious views of the town and of wildlife coasting by as we relaxed in the pool almost at eye level with the lake.

This is by no means the first outdoor pool set in outstanding natural surroundings that I’ve been in, but there was something truly special about this feature of the Weisses Rössl, and I stayed in the pool till my skin had long turned prune-like.

When I did head inside it was to another pool with numerous whirlpools and jets, then upstairs to the sauna, steam room and relaxation areas.

Before dinner, we strolled through the town, which seemed particularly quiet after the Christmas markets of the previous day. The markets only run during the weekends of advent so by Monday St Wolfgang is very peaceful.

As the sun dipped behind the mountains, the sky turned pink and the reflected mountains echoed nature’s calls – a water bird here, a splash from a fish there, and in the distance, the Christmas lantern lit up the lake once more.

The next morning we paused for one more look at the addictive lake and mountain view before taking the 45-minute drive into the city of Salzburg. We were sad to leave St Wolfgang’s solitude, but friends had long told us about the wonder of Christmas in Salzburg.

Part two Christmas in Salzburg – bright lights in the city is here and you can read Christmas in Vienna: a capital idea too.

Confessions of a gardening virgin: how Victoria’s gardens grew on me
Christmas in Salzburg – bright lights in the city