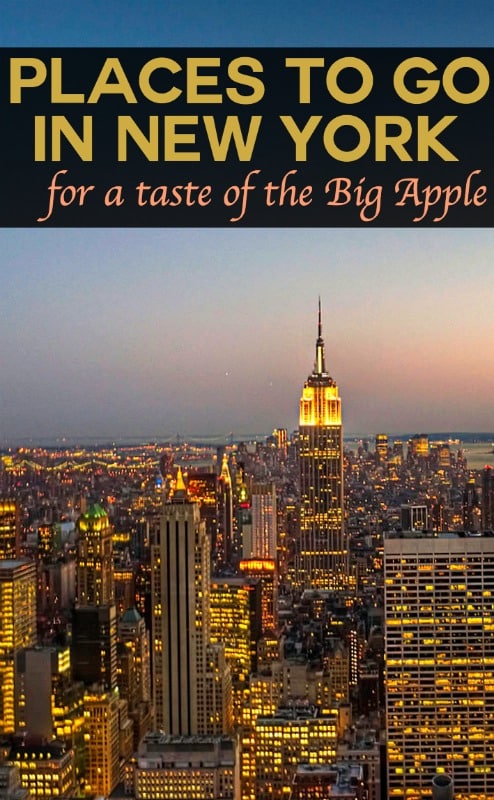 New York is one of the greatest cities in the world and can be visited year round. It’s no surprise more than 50 million people visit annually, nor that there are almost as many places to go in New York as new arrivals at its airports each day.

The Big Apple is a vibrant and thrilling city. Home to an array of iconic landmarks, a world-famous theatre district, and first-class attractions.

The city has a unique magic, that will leave you wanting to return again and again.

This guide is sectioned into our favourite destinations to visit in New York by interest; and for those still planning a visit to the city, we highlight some of New York’s finest hotels below.

A slice of Big Apple luxury

There’s no better place for luxury than New York. It’s home to extravagant hotels, a hub for designer boutiques and some of the best fine-dining in the world.

Enjoy dinner at one of the city’s Michelin-star restaurants, including the three-star Chef’s Table at Brooklyn Fare, the Upper West Side’s Telepan and Lincoln, or Chef Daniel Boulud’s contemporary brassiere, Daniel. 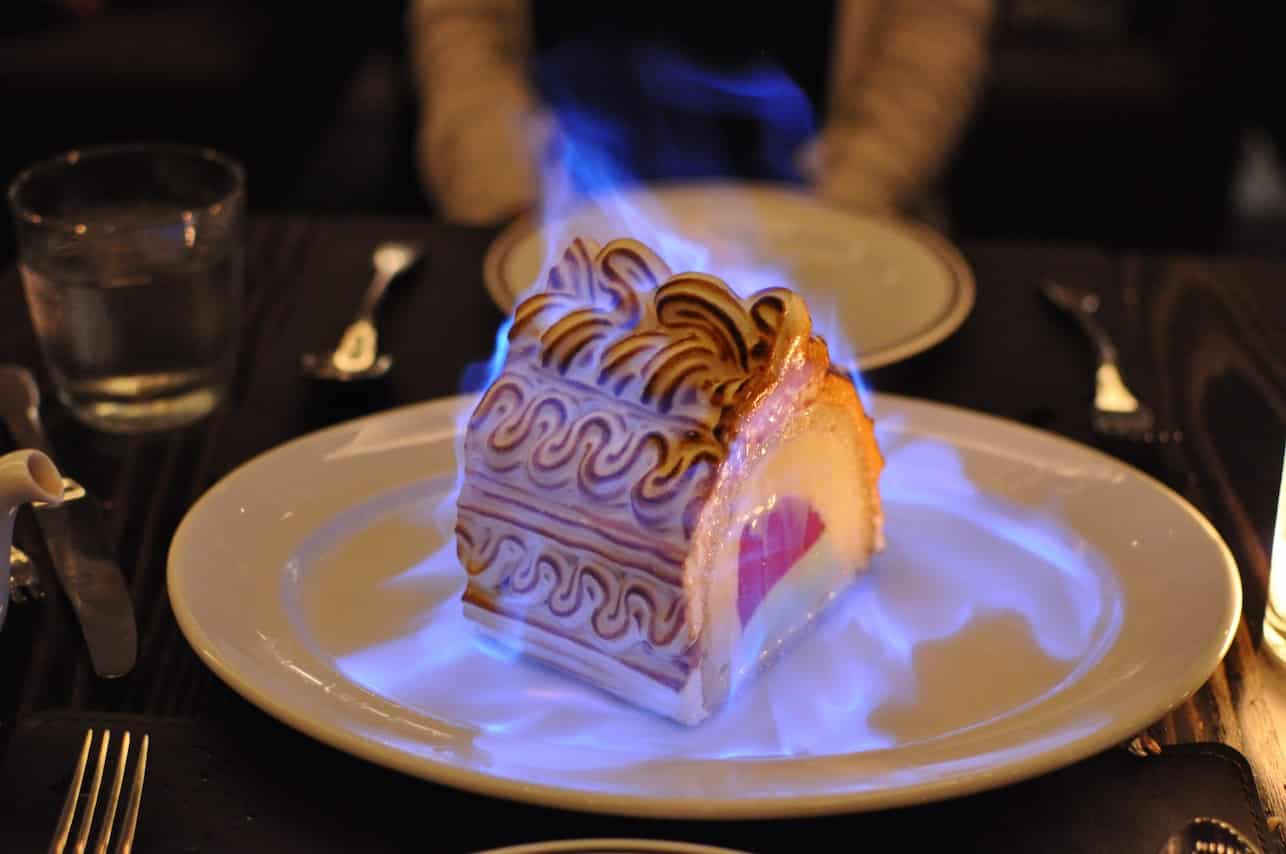 To unwind in sumptuous surroundings, take your pick of legendary hotels like the Waldorf Astoria and The Plaza.

Fashionistas should head to Madison Avenue or The Meatpacking District for the latest trends, while there’s plenty of designer labels at Barneys, and Bergdorf Goodman. And if you believe diamonds are a girl’s best friend, you’ll be in for a treat at Harry Winston’s and Tiffany & Co. on Fifth Avenue. 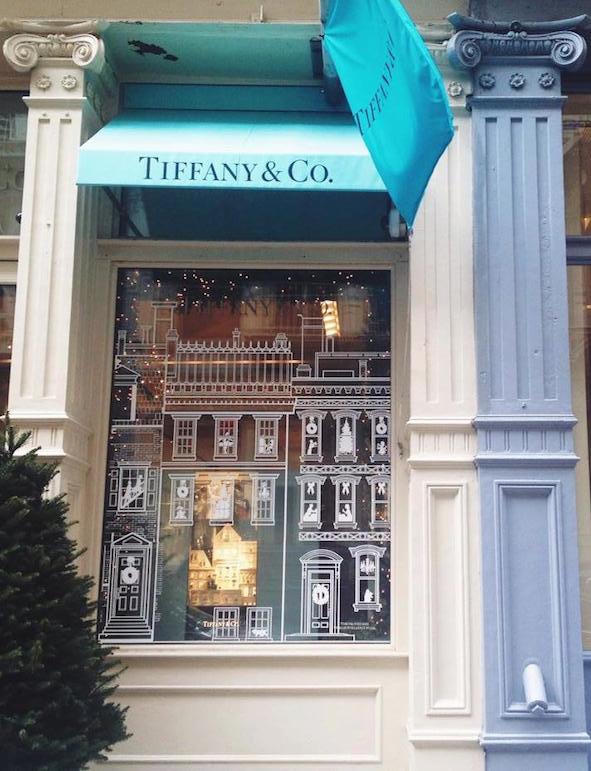 There are many ways to see the city but you can’t beat a private helicopter tour, follow this with afternoon tea at The Plaza and a Broadway show and you have our perfect day.

Beyond the flashing lights of Broadway and towering skyscrapers, New York has a fascinating history.

The Statue of Liberty is one of the world’s most iconic landmarks and was a gift from France to the people of the United States. It was a symbol of freedom and democracy to those who arrived in New York seeking a better life. And for many Liberty was the first they saw of the city. 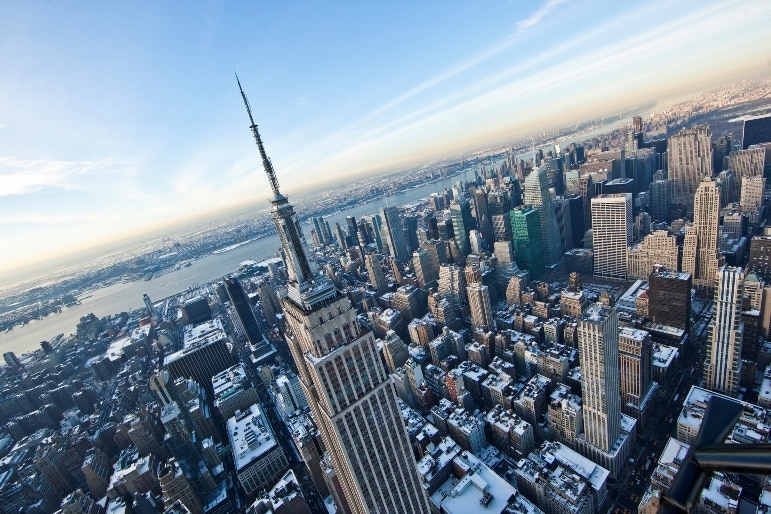 To learn more about those who migrated to New York, head to Ellis Island – once America’s largest immigration station.

A visit to the Empire State Building is a must. At 103 storeys, this art-deco skyscraper was once the tallest building in the world and remains one of its greatest works of civil engineering. The Brooklyn Bridge is another example of incredible architecture. It took over 14 years to construct and was at one time the longest suspension bridge ever built. Today it’s a designated National Historic Landmark. 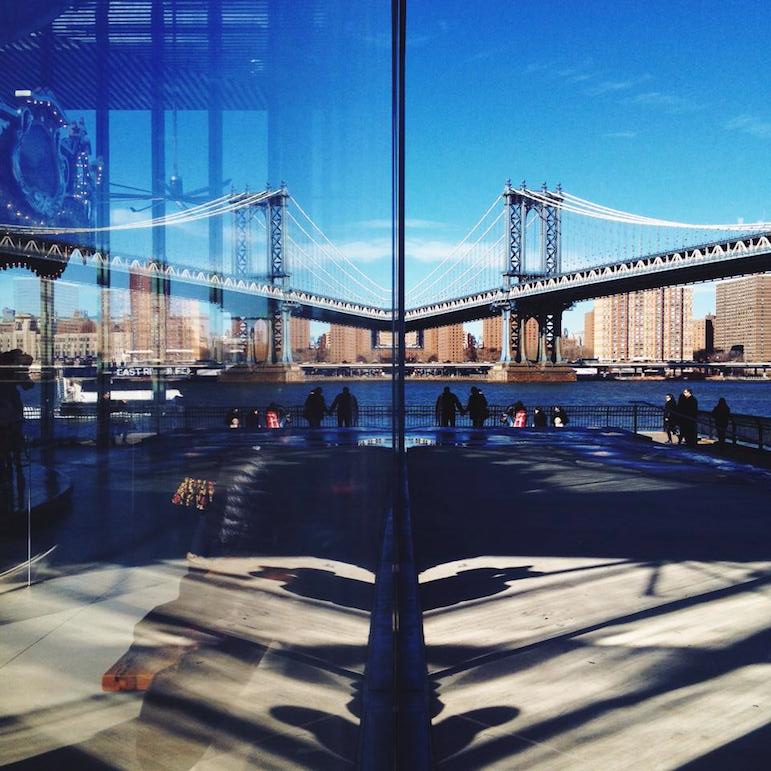 For art deco design we’re also fans of the curves at the Chrysler Building and the beautiful interiors of Grand Central Station.

With so many exciting family attractions in New York, it’s difficult to know where to take kids first. Let’s start with the Children’s Museum of Manhattan, an interactive venue with an educational mission and plenty of exhibits for younger children. 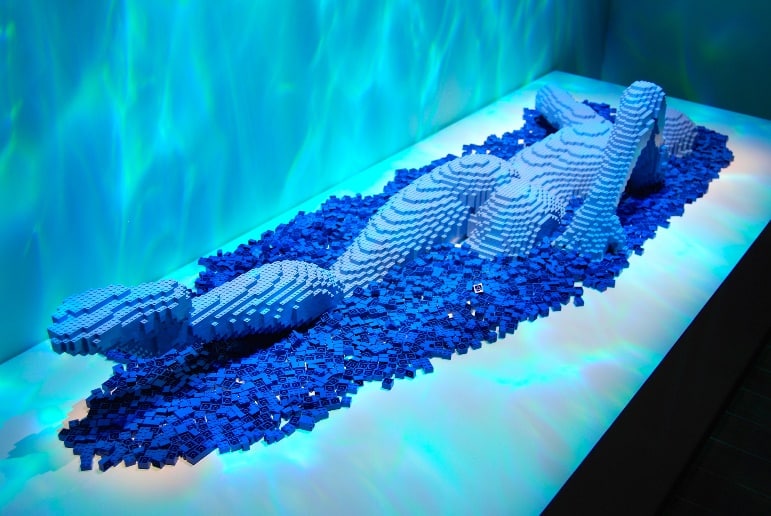 Discovery Times Square is a large exhibition centre with unique and compelling displays for the young and young at heart, promising hours of entertainment.

For a real slice of New York life head to Citi Field, home of the New York Mets. Explore the baseball stadium on a guided tour, visit the Mets Hall of Fame and Museum. Or to really feel like a New Yorker, get your hands on some tickets for a big game. 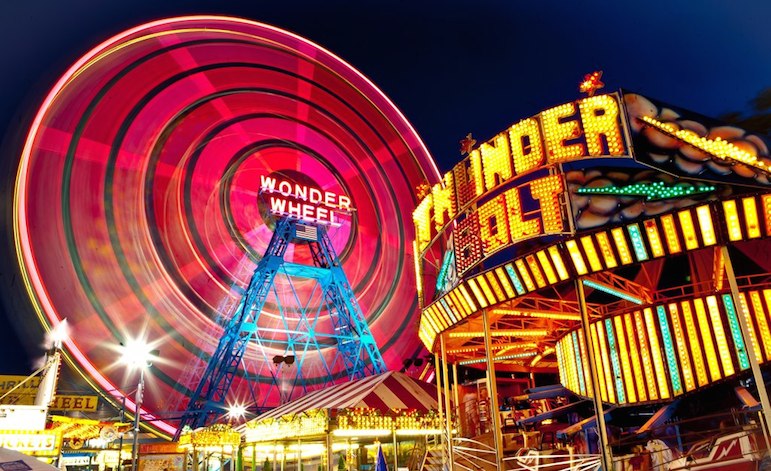 Take a trip out of the city to one of the world’s most famous playgrounds, Coney Island. Explore the Coney Island Museum, build sandcastles on the beach or grab a hotdog on the boardwalk. There is also a lively amusement park, with gentle rides for smaller children and plenty of larger attractions for thrill seekers.

Places to go in New York for shoppers

A trip to New York isn’t complete without visiting one of its legendary department stores.  Head to the 11-storey Bloomingdales and fill up some of its iconic ‘Brown Bags’ or try Macy’s, one of the world’s largest department stores covering an entire block of New York. 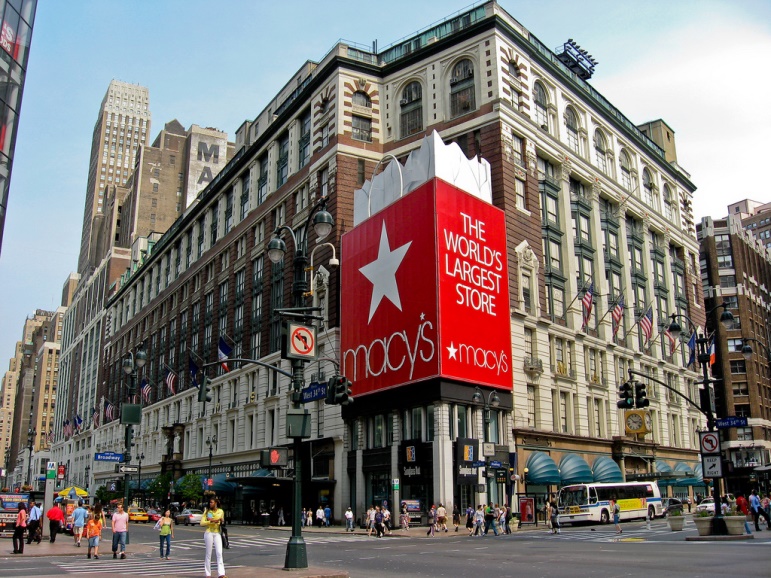 Fifth Avenue is the most prestigious shopping street in New York. It has a wide range of shops with the likes of Cartier and Banana Republic rubbing shoulders. Head to super trendy SoHo for galleries selling original artworks, quirky boutiques and affordable chains like Topshop and H&M. 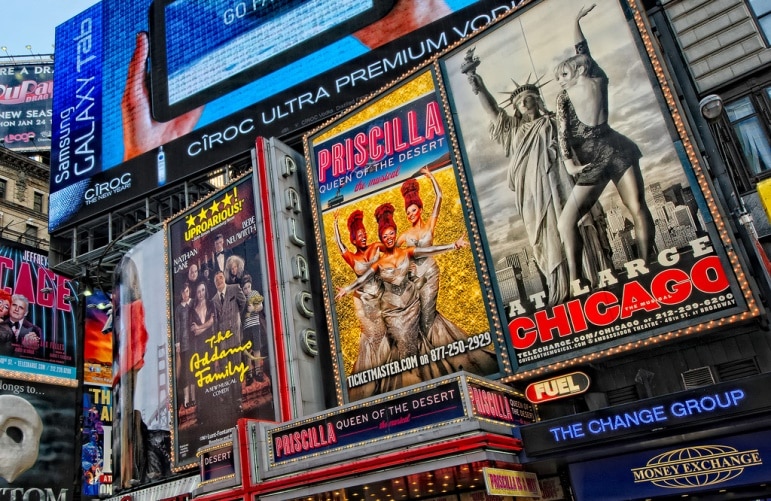 New York is the home of Broadway, a world-famous district of 40 theatres where bright lights flicker into action each evening. Popular shows include The Phantom of The Opera, Les Miserables, Chicago, Stomp and The Lion King – there really is something for everyone.

If classical entertainment is more your style, head to the New York City Ballet, the Metropolitan Opera or the New York Philharmonic at the Lincoln Center of Performing Arts. 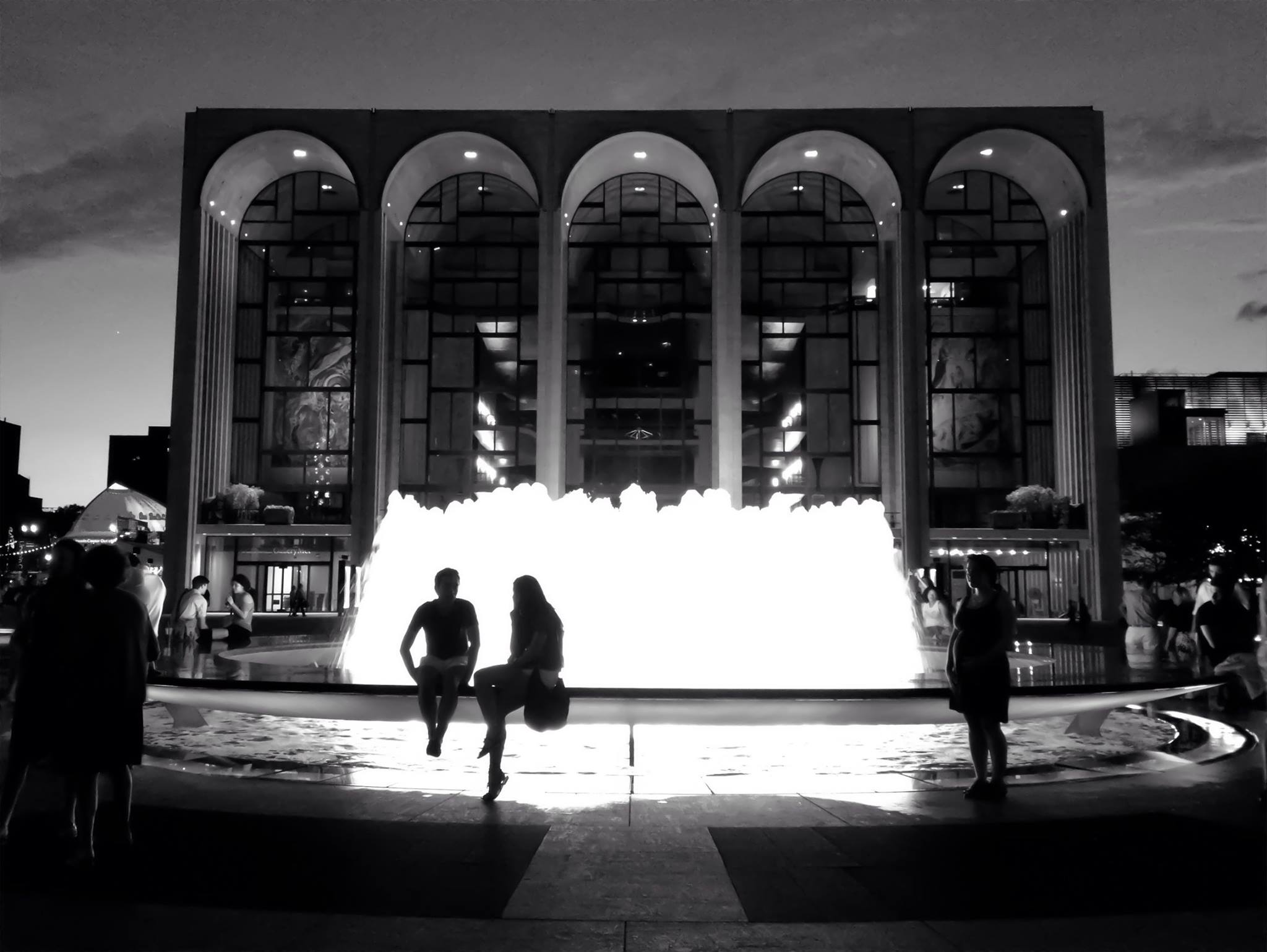 The American Museum of Natural History is a must see for history buffs. The museum is home to a fascinating collection of artefacts, 42 permanent exhibitions and has a selection of tours, including a chance to spend a Night at the Museum. 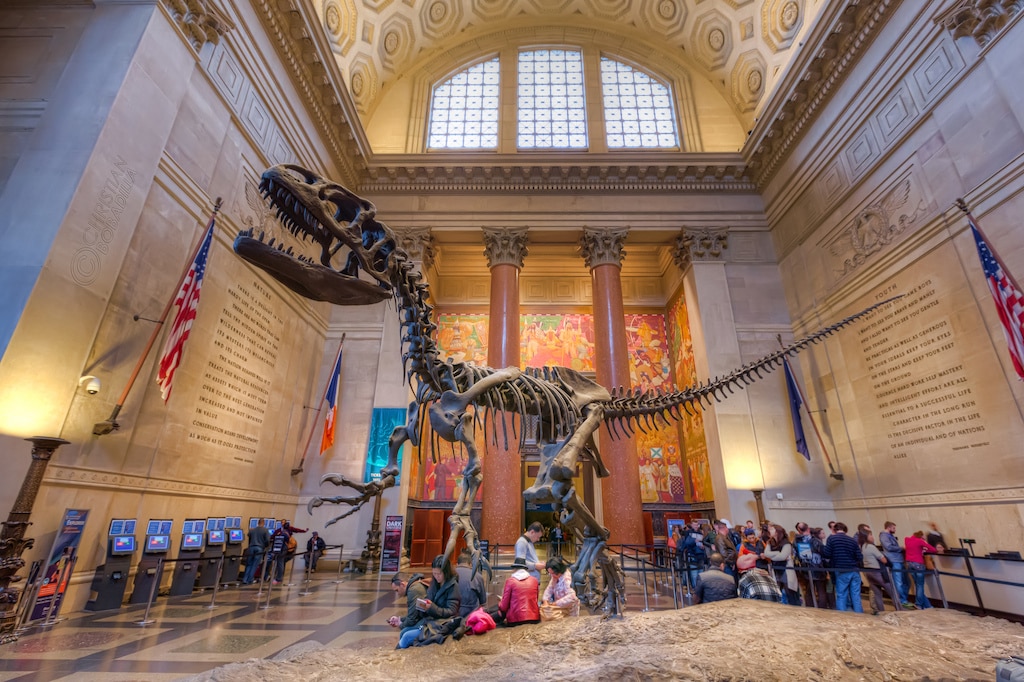 There are also a fine array of galleries which should rank high on your list of places to visit in New York including the Metropolitan Museum of Art, the Frick Collection and the Guggenheim Museum. 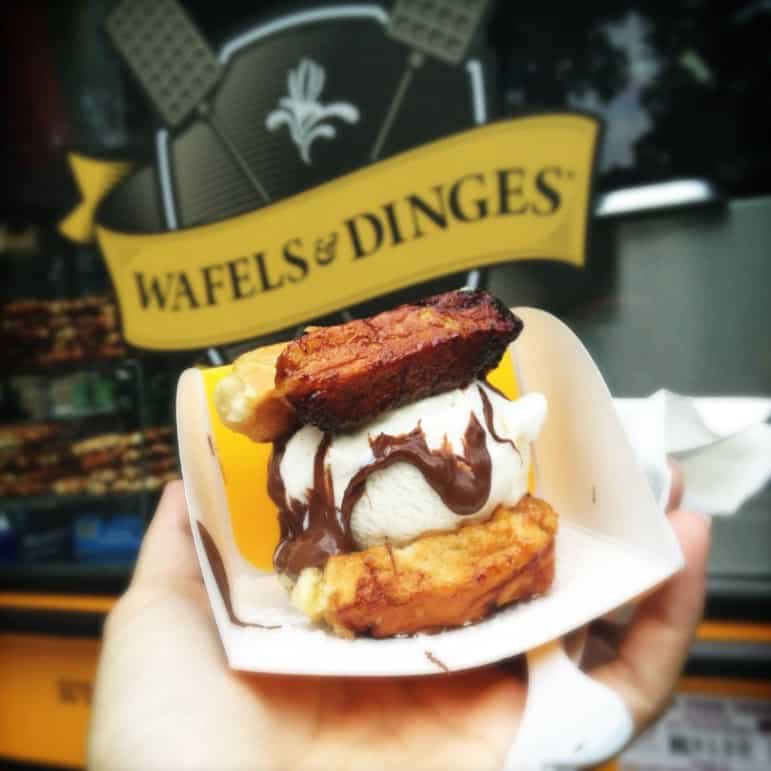 You can enjoy just about any food that tempts your palate in New York. From dim sum to canoli – it has one of the most multicultural food scenes in the world, plus a trendy line in food trucks serving up tasty eats. 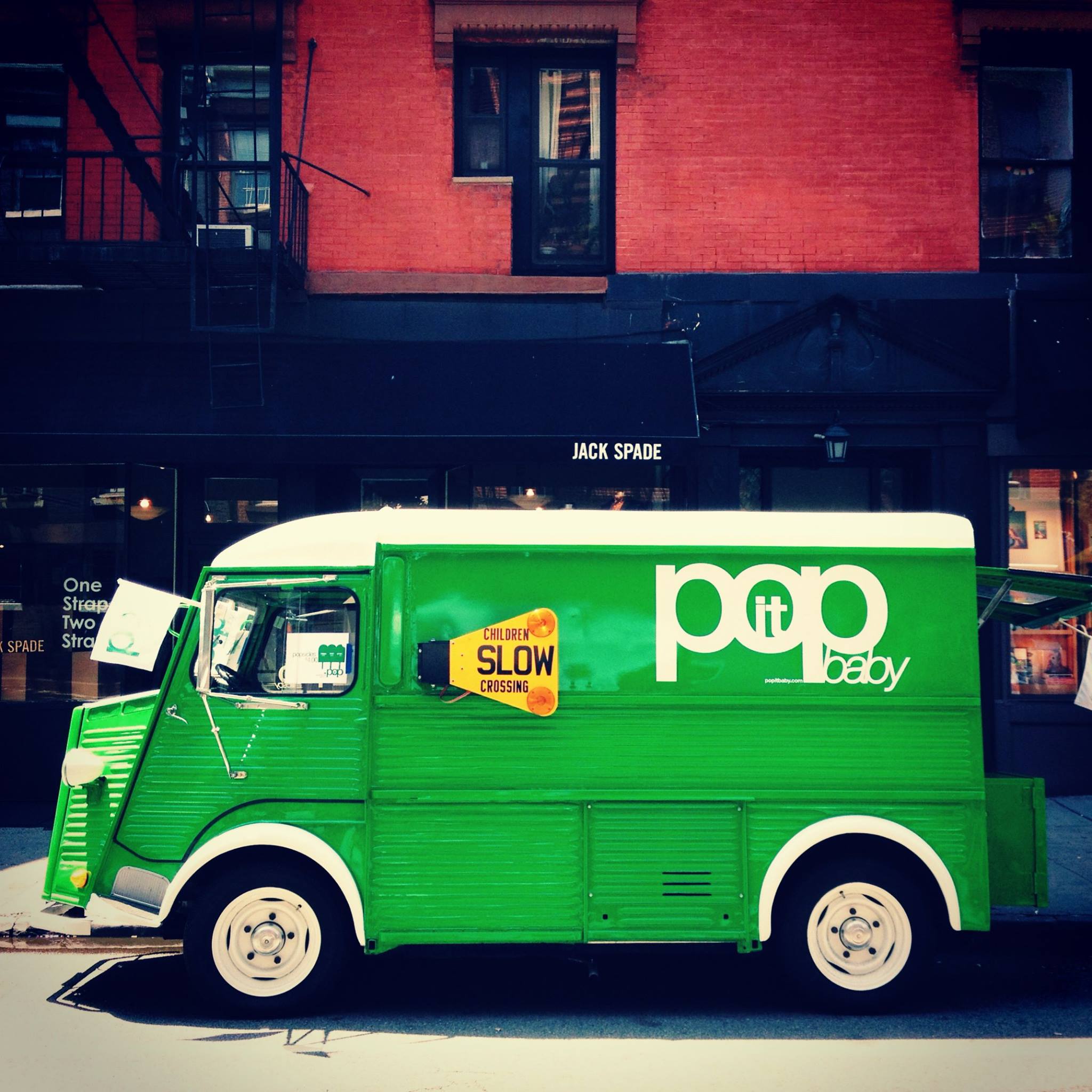 But it would be wrong to leave New York without indulging in some of the city’s most iconic dishes. So be sure to grab New York cheesecake at the likes of famed Magnolia Bakery, in Greenwich Village. Hit Chinatown, enjoy a hot dog at Gray’s Papaya, in the West Village, southern fried food at Sylvia’s Restaurant, in Harlem, and experience diner culture at Empire Diner, in Chelsea.

With over 40 Michelin-star eateries, there are plenty of fine dining options to choose from too. The three Michelin-star Le Bernadin, for example, comes highly recommended.

Central Park and beyond

Central Park is known as the city’s lungs and is an unmissible (and at 3.4 square kilometres, at times unavoidable) destination in New York. It has lakes, fields, arcades, a zoo, sculptures and statues, and is home to historical monuments and sites like Strawberry Fields, a section of the park dedicated to the memory of The Beatles’ John Lennon, who lived nearby.

A visit to Central Park wouldn’t be right without a couple of New York clichés – ice skating in winter, and horse and carriage rides year-round. 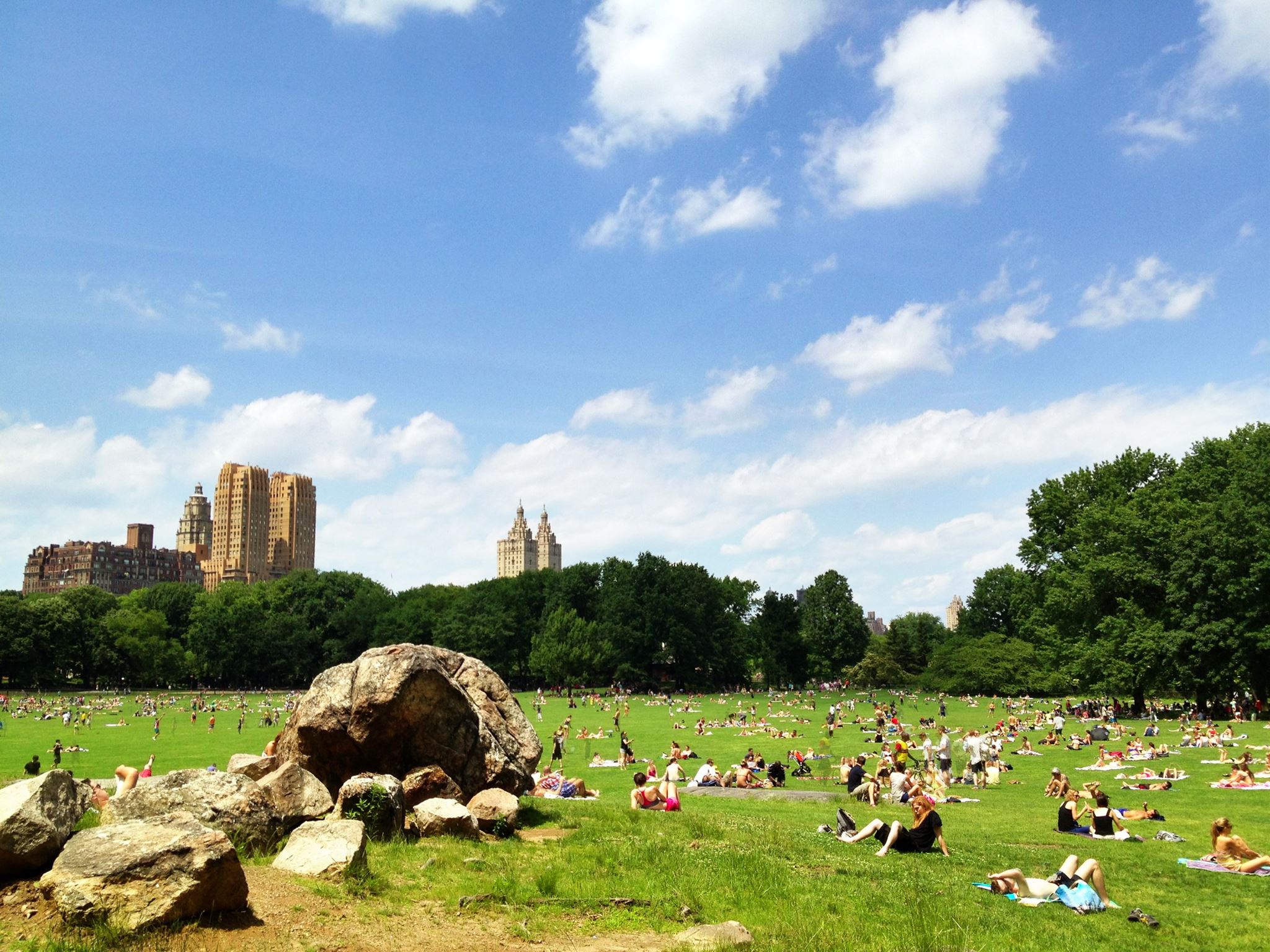 To escape the hustle and bustle of the city, head up Long Island to The Hamptons. Just two hours from the city, this region is known for its long sandy beaches, fantastic restaurants and boutique-lined streets. 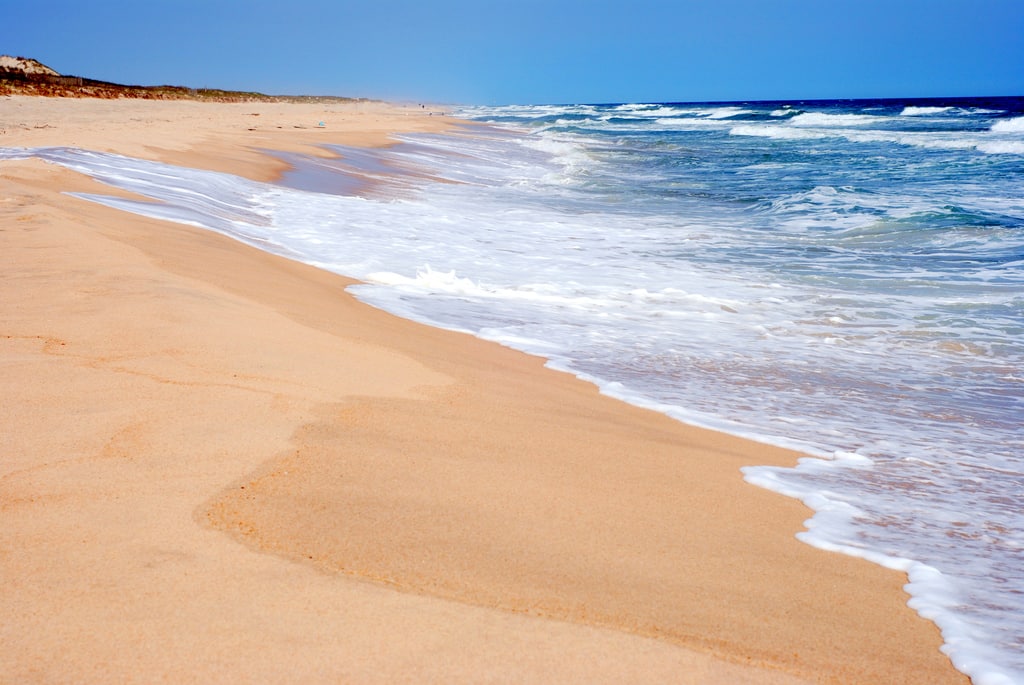 Search for flights to New York

Places to stay in New York 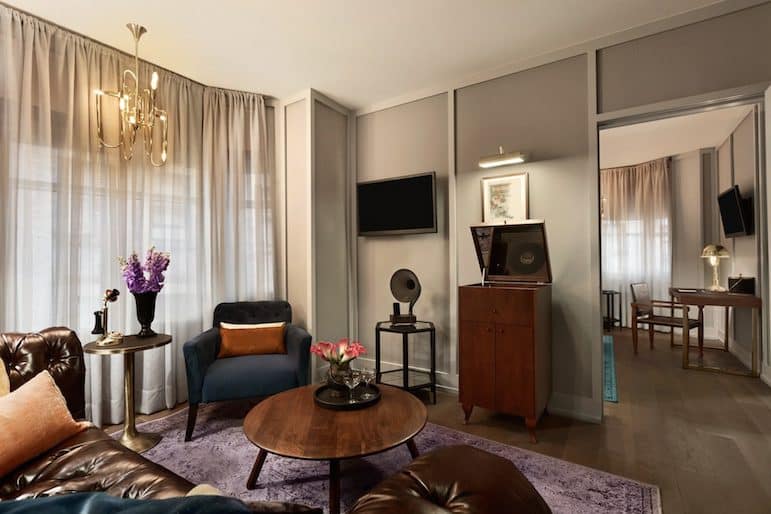 There’s an incredible array of great hotels in New York City here are just some favourites:

Waldorf Astoria New York – a five-star landmark in New York and one of the most luxurious hotels on Park Avenue.

The Plaza New York – historic with a contemporary twist, we love The Plaza for its sumptuous décor and high-tech gadgetry.

The Surrey – elegance in the Upper East Side, The Surrey’s boutique guest rooms are full of indulgence.

New York Palace Hotel – this extravagant hotel certainly lives up to its name, we love its dramatic grand lobby and elegant furnishings

The Gershwin Hotel – a bohemian hotel with budget options (prices from £148 per night), and just one block from Madison Square Park.

The Pierre – opulence at its finest, The Pierre boasts stunning suites and world-famous service

The Roger – an urban retreat in an unbeatable location, some rooms have a private terrace.

We’re bringing you a whole series of Places to Go. Read Places to go in London for Every Visitor for more destination ideas.