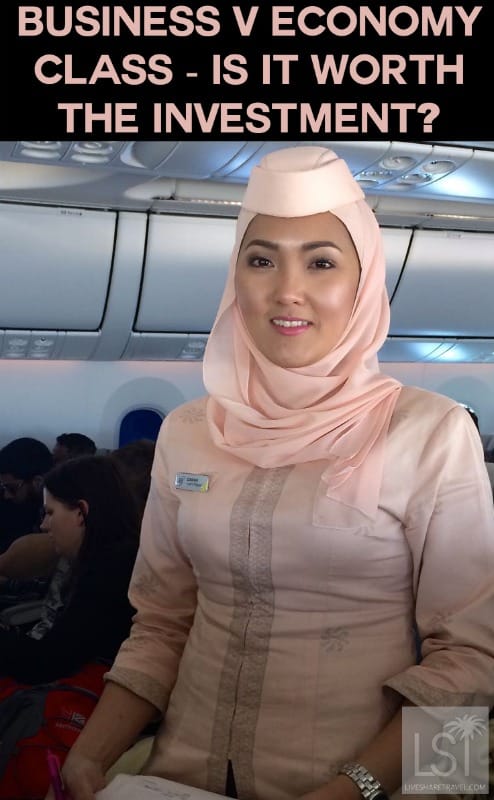 It’s the big question in air travel – is business class worth the investment? On a recent trip to Sabah, in Malaysian Borneo, we travelled in Royal Brunei Airlines business class and economy cabins.

The flight from London was via Dubai and Brunei, aboard the latest planes to join the airline’s fleet – Boeing 787 Dreamliners.

It was this very day last year that Royal Brunei launched a daily flight from London to Brunei, via Dubai aboard shiny new Boeing Dreamliner 787s.

The airline promised much – last year Royal Brunei’s Dreamliners were lauded by the airline as the Betterfly – bringing more space, more comfort, less noise, and lower cabin pressure, while cutting carbon emissions. Boarding the inaugural flight, my wife Sarah took a seat in business class and had a dream-filled flight in the airline’s lie-flat beds. Read all about the inaugural Dreamliner experience on the link above.

So what’s it like to fly in economy and business class on the Dreamliner? What extras do you get for your money in business class?

Is economy really that much more comfortable than onboard other planes?

And is it worth spending more to travel in luxury on the Dreamliner?

Economy class travel is rarely exciting. Few of us dream of the day we can hop aboard a long haul flight and sit packed like sardines in ‘cattle class’.

So when we got our boarding cards to fly economy class on the Dreamliner with Royal Brunei Airlines we weren’t exactly doing a happy dance through London Heathrow Airport. 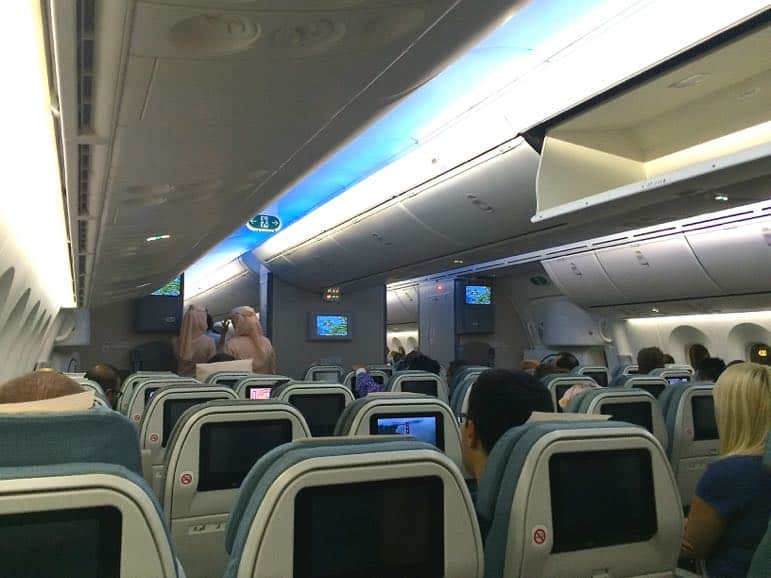 But just a few minutes into the flight I was already impressed. The Dreamliner is big, Royal Brunei’s cabin layout spacious – there’s just 236 seats in economy. In fact, compared to some airlines running similar routes from London to Asia, it’s cavernous.

There’s room for long legs – Sarah is 5 foot 10 inches – so this she noticed!

There’s also plenty of headroom so you don’t feel claustrophobic.

There’s space in your seat with a seat pitch of 32 inches. Plus when reclining the seat pad moved forward as well as the back going down up to six inches, to offer a more comfortable resting position.

There’s space for business – you can easily type on a laptop on your lap, or on your table without typing at an angle (I’ve written most of this from my seat). I was also surprised, and pleased, to find not just a USB where you could plug in your phone, but seat power too – this isn’t a given in economy with other airlines.

There’s room to pass by people on your row without tripping over their legs.

There are also big views from electronically-controlled windows, which are tinted blue during sleeping hours.

There is even room in the bathrooms – no contorting into odd shapes here.

Then there’s the crew – they were always helpful, smiling and polite. Most cabin crew are of course – they seem to all attend a cabin crew charm school, but it’s a fact that some airlines’ crews didn’t pass with honours. Royal Brunei’s pastel-clad crew did, however. 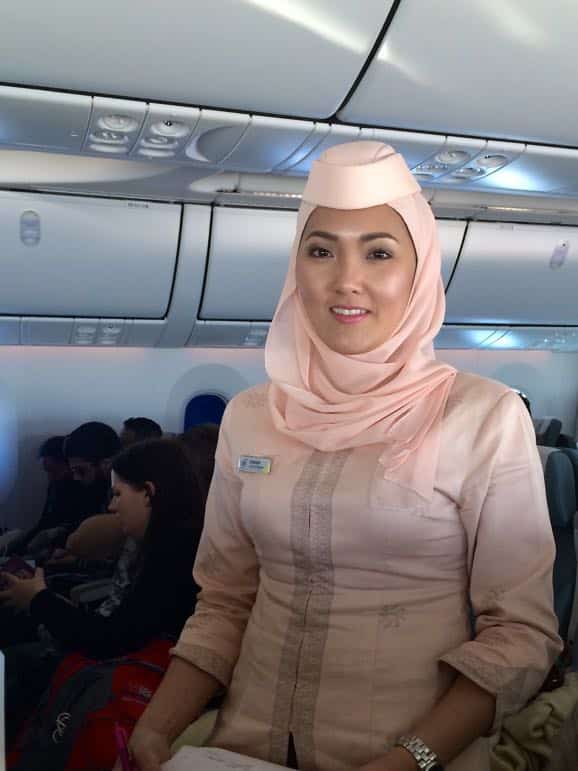 The fact is economy class on Royal Brunei Airlines’ Dreamliner is good. It will never beat business class for total comfort and service. But in many other respects it makes economy class travel a dream.

It’s always nice to board a plane and turn left instead of right. Boarding my flight back to London, I was guided towards my business class seat and all the extras that goes with it.

I was immediately struck by the spaciousness of the business class cabin, and that there were just 18 seats. They had fully flat beds, and, at the press of a button my chair even gave me a massage – you won’t find that in economy. 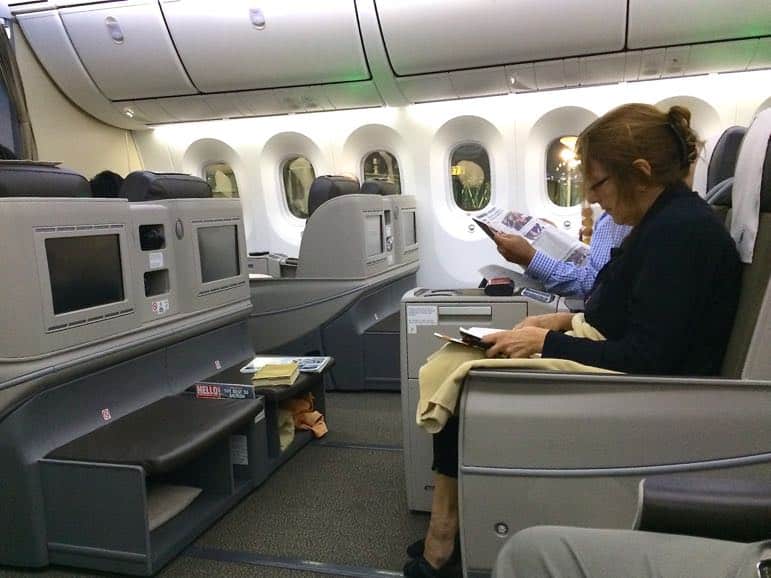 It’s important to note here, that Royal Brunei doesn’t have a first class cabin – so their business class is something of a hybrid of the two. But with a 79-inch seat pitch it competes well with first class with some of its competitors.

No sooner had I sat down than a crew member offered to hang up my jacket, then offered me a cold towel and a drink. As I drank she handed me a menu to choose my in-flight meals. The contrast in quality to economy class was stark. And when my meal was served it was as individual courses instead of all together on one tray. Plus it came with real cutlery. 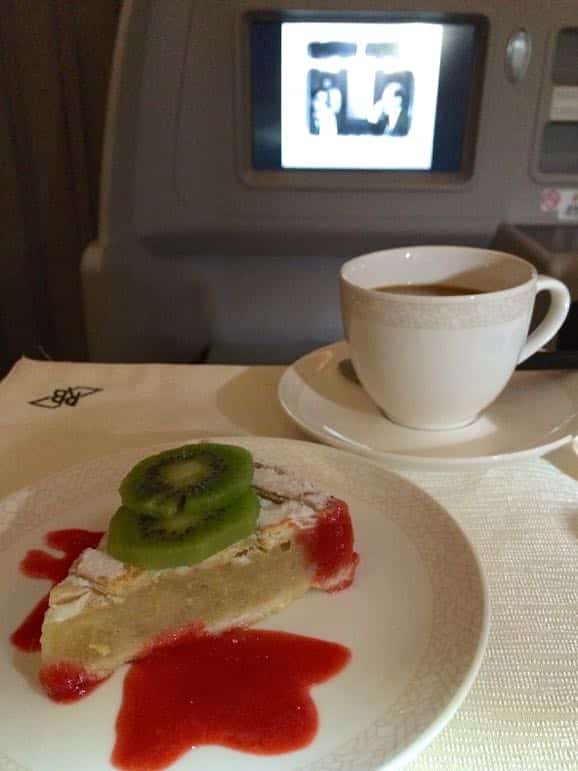 The quality and quantity of the food was vastly superior to what was served in economy. One point to note is that Royal Brunei Airlines is dry, so does not have alcohol onboard, but unlike other airlines, you can bring, and drink your own, in each cabin.

The personal attention paid to business class passengers is enhanced by the high ratio of staff. At least three cabin crew for the 18 of us travelling in business class.

Noise cancelling headphones were provided for the in-flight entertainment, eliminating nearly all background noise and enhancing the sound quality greatly – this was a big improvement on economy where I struggled to hear the films through crackly headphones and the quieter, but still present, hum of the engine. The noise cancelling headphones were so good I kept them on when resting. And when you are ready to sleep, the crew provide you with a proper pillow and warm quilt to rest under. 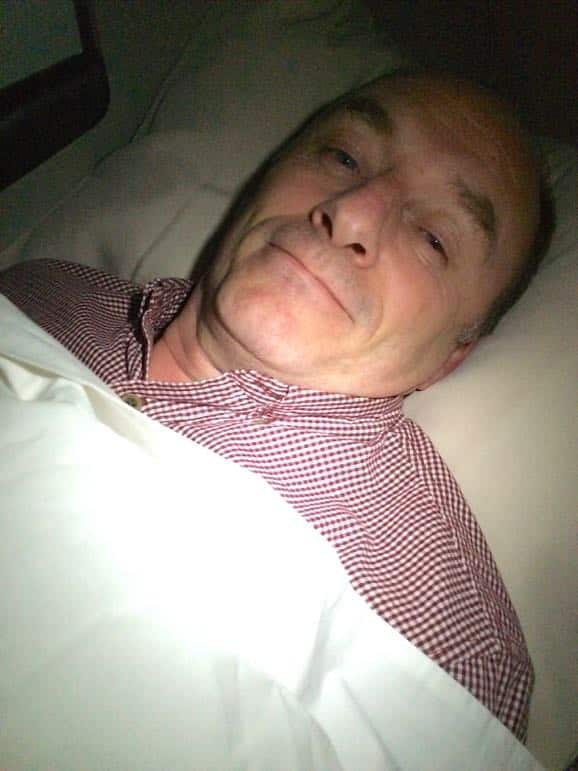 As a business class customer I also had access to the business lounge pre-departure at Brunei and for the stopover at Dubai, which always adds another touch of comfort and luxury to any trip. That said, Brunei airport’s revamp, which has taken over a year now, is getting there. Check-in certainly was more peaceful than last year. 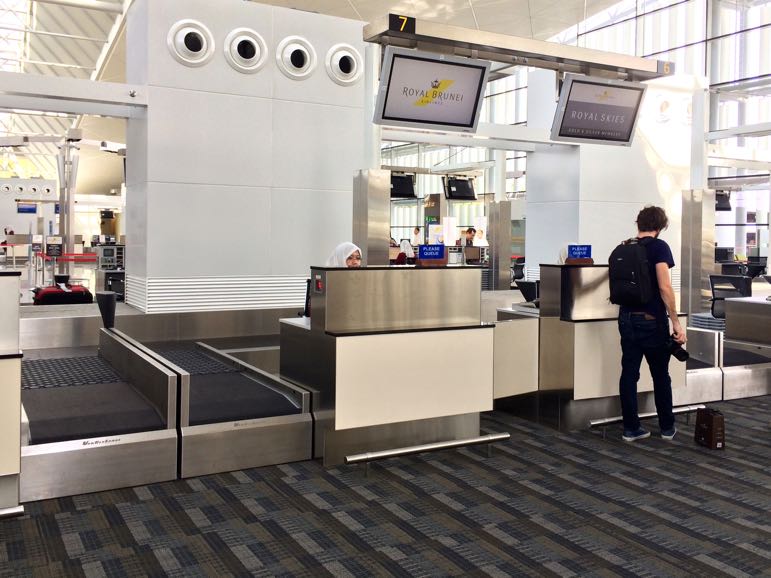 The Dreamliner is certainly the best plane I’ve flown aboard – no matter the cabin. It is very modern, surprisingly quiet, and there is space for all passengers – be that in legroom, the cabin in general, or the storage space.

However, the contrast between business and economy class is stark. Business is very relaxed, the difference in comfort, service and quality between the two, marked. So is business class worth the extra money?

Well, judgements of value are always subjective. From London to Brunei, there is around £2,000 difference in return prices between seats in the cabins. This is significant. However, if you can afford to upgrade, it is certainly worth it. And, had I been heading all the way with Royal Brunei from London to Melbourne, I would definitely consider it worthwhile.

But if you just wish to indulge, or enjoy a special occasion, then business class means you’ll arrive at your destination feeling ready for your next adventure.

Royal Brunei isn’t the only airline flying from London to Melbourne – you could also consider Qantas – read our review of premium economy and business class.

I travelled with the airline for the #LoveSabah project created and managed by iambassador, in partnership with Royal Brunei Airlines and Sabah Tourism. As always all opinions are entirely my own.