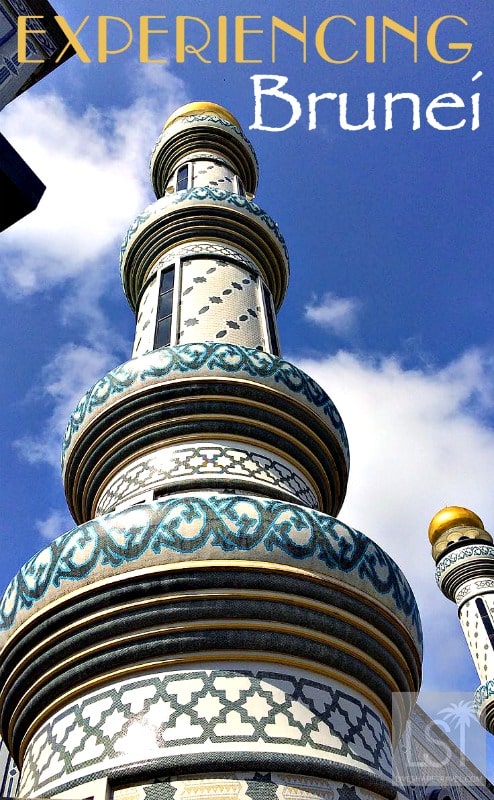 A skyline of colourful minarets, golden domes and modern office blocks greeted our arrival in Bandar Seri Begawan, the capital of Brunei.

If you’re looking for a destination that’s a little different, then you need look no further. Our short foray into this fascinating city revealed much about this tiny nation, known mostly for its wealth.

This oil rich state has a population of around 400,000, a coastline on the South China Sea, and with high humidity it’s hot, hot, hot.

It’s perfect for a short break and provides an interesting interlude for those, like us, travelling with Royal Brunei Airlines to the likes of Sabah in Borneo, and numerous other cities in Asia, plus all the way to Melbourne, Australia.

The country’s oil exports provides a high standard of living, and low unemployment and crime rates. And while Malay is the official language, almost everyone we encountered spoke English.

Brunei is located on the north coast of the island of Borneo. And what the small Sultanate lacks in size – it is the smallest of the three countries making up the island – it makes up for in colour and flamboyance.

It is an Islamic nation with a deep-rooted faith, but it also embraces a vibrant evolving contemporary city where social media and blogging are popular, in fact we received many great tips from local bloggers.

To familiarise ourselves with what seemed like a conundrum, we set out on bright sunny morning for a tour of the capital.

What to see in Bandar Seri Begawan

Our first stop was at one of the city’s must see sights, the striking Jame Asr Hassanil Bolkiah mosque, built in 1992 for the 25th anniversary of the Sultan’s reign. Replete with its golden dome and intricate decoration, it’s one of the most beautiful places in the city. 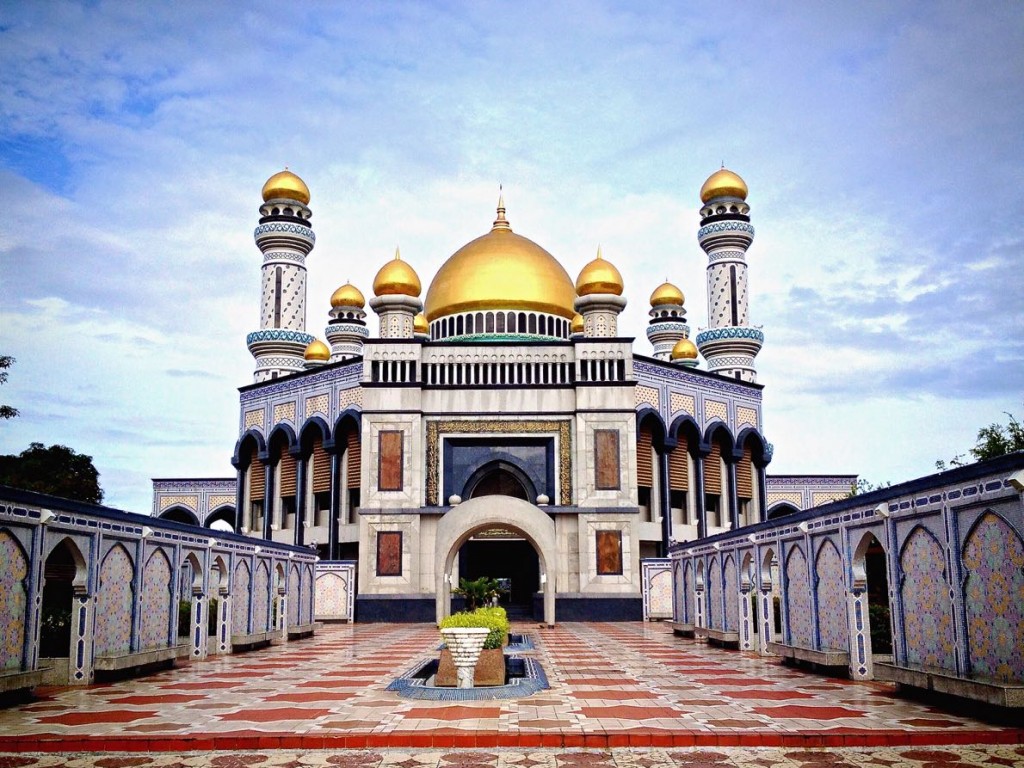 We had to cover our touristy clothes with long black robes to enter. We stopped briefly at the wudu, where the faithful go for ritual cleansing before praying. Then on to the main prayer room. It was empty of worshippers but was still an imposing sight. A cavernous space, it had row upon row of touching prayer mats, allowing limited room for individuals but the maximum space to fit in thousands of worshippers. 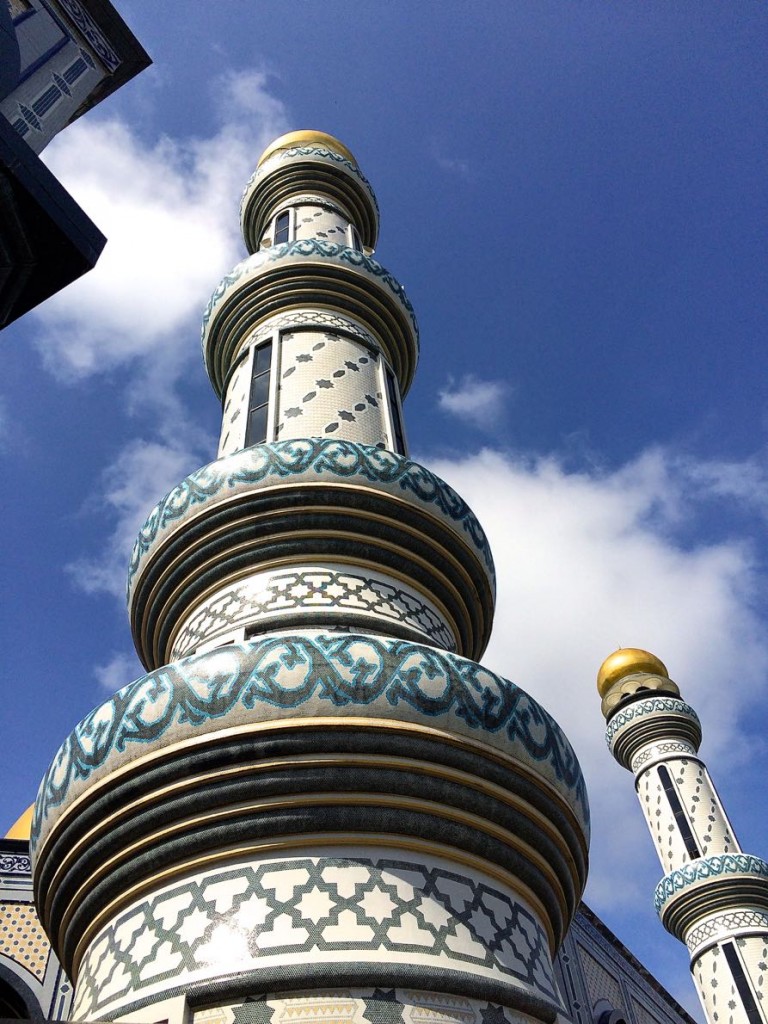 The other mosque worthy of a visit is the Sultan Omar Ali Saifuddin Mosque. It gleams white across an artificial lagoon in Brunei River’s water village and has marble minarets and golden domes. A marble bridge leads to a replica 16th century barge on the lagoon, used for unusual contests – Quran reading competitions. 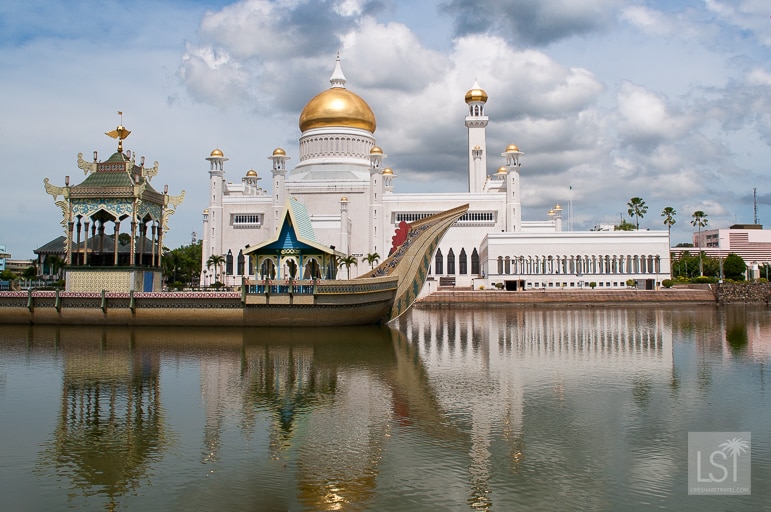 Elsewhere in the capital city we visited the Teng Yun Buddhist temple, and Kg Kianggeh market where familiar foods were sold among a variety of less familiar offerings. 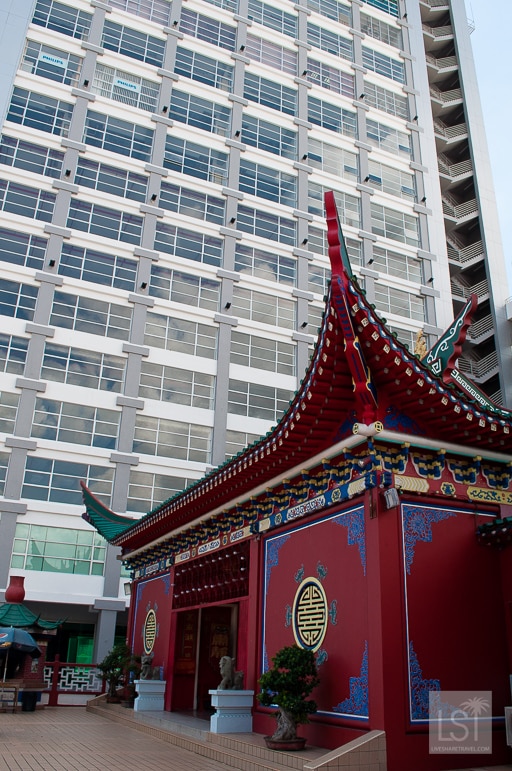 Brunei is best known for its riches, or more specifically, those of the Sultan of Brunei – purportedly the second richest monarch in the world after Thailand’s king. We’d already spotted the Sultan’s palace from afar – sadly for us this wasn’t the one of the days of the year when he opens the palace to meet and greet the Bruneian people. 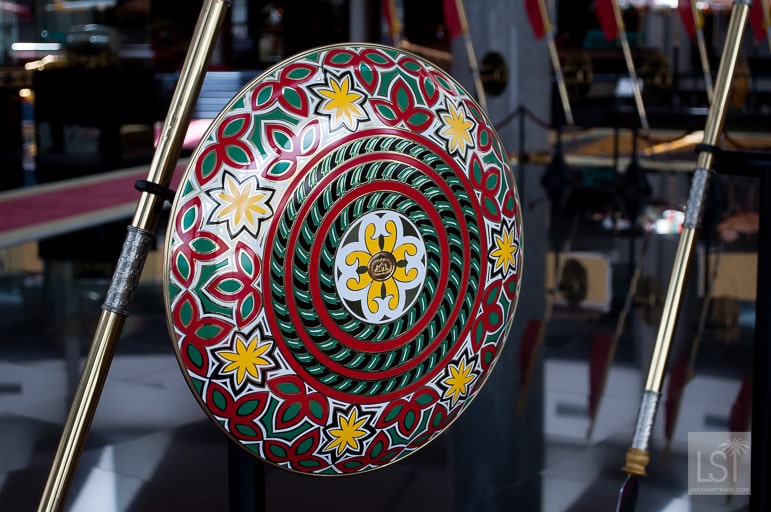 Bandar Seri Begawan isn’t all exuberant wealth though. On Brunei Bay we headed out to Kampong Ayer, the water village on the Brunei River. More than 39,000 people live in homes on stilts, high above the water in Brunei. 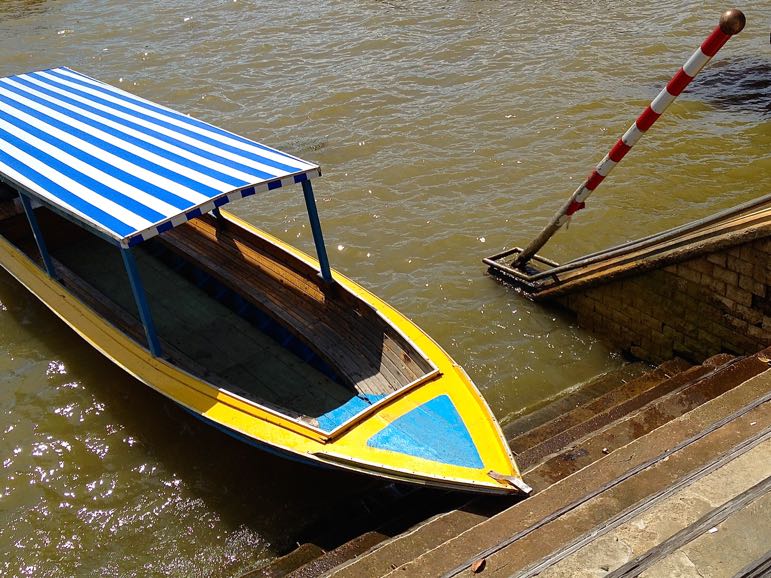 We took one of the water taxis that criss-cross the river to the village to take a closer look. Gingerly leaving our floating transport, we carefully strolled open-sided wooden walkways past homes and businesses. 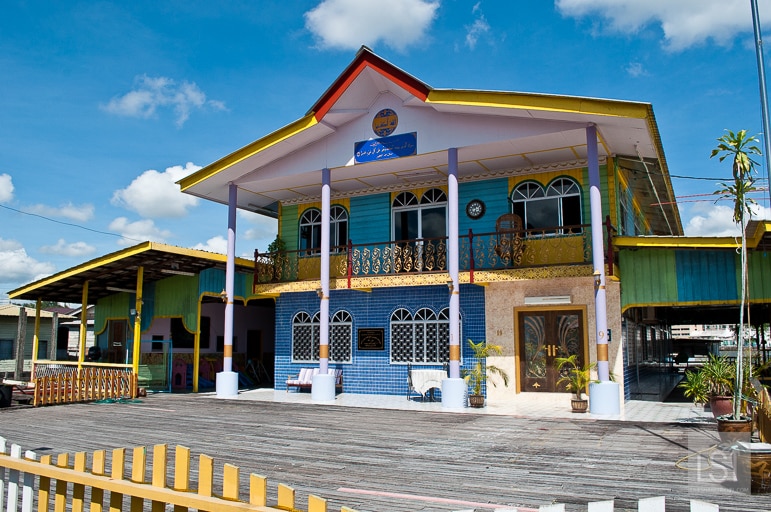 We met the village elder who performed weddings at flamboyant altars in his home. And in one of the houses, we called in for tea and biscuits with a hospitable family. Surprisingly the interior of the houses was very similar to homes everywhere, despite their watery foundations. Brunei, once again confounding our expectations. 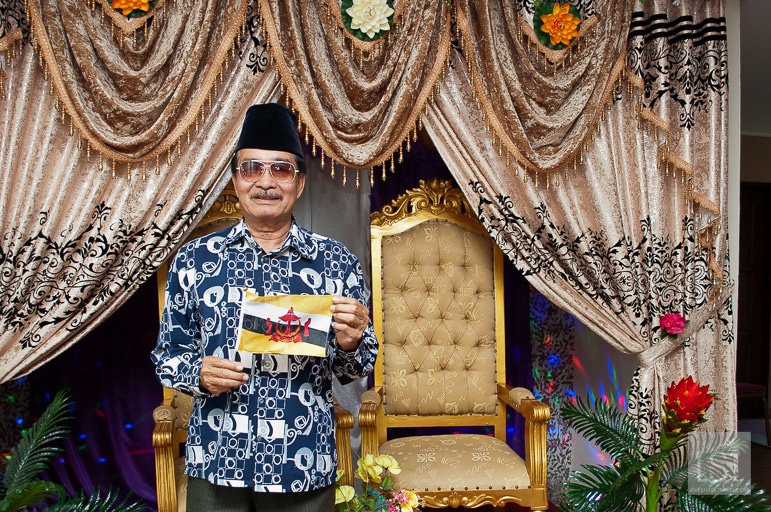 The Empire, a hotel to remember

If Cecil B DeMille needed a set for an exuberant historical drama, he would not find better than the Empire Hotel and Country Club. 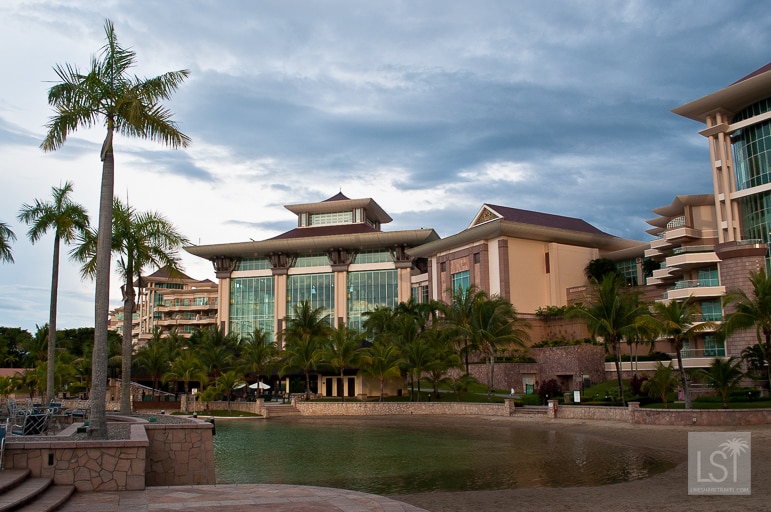 And I suspect it’s the closest I will ever come to living in a palace. With its sumptuous decor and conspicuous wealth it felt like a movie set from the 1930s, but with 21st century facilities.

It really does have to be seen to be believed. 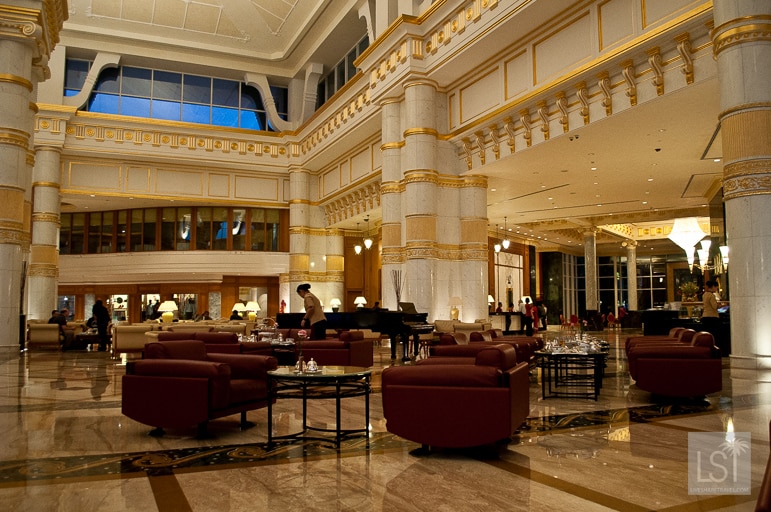 Lavish marble pillars with gold ornamentation dominate the palatial lobby, in fact some of them take in three or more floors. Then there’s the regal furniture, mighty chandeliers and intricate designs, that combine in overwhelming opulence. 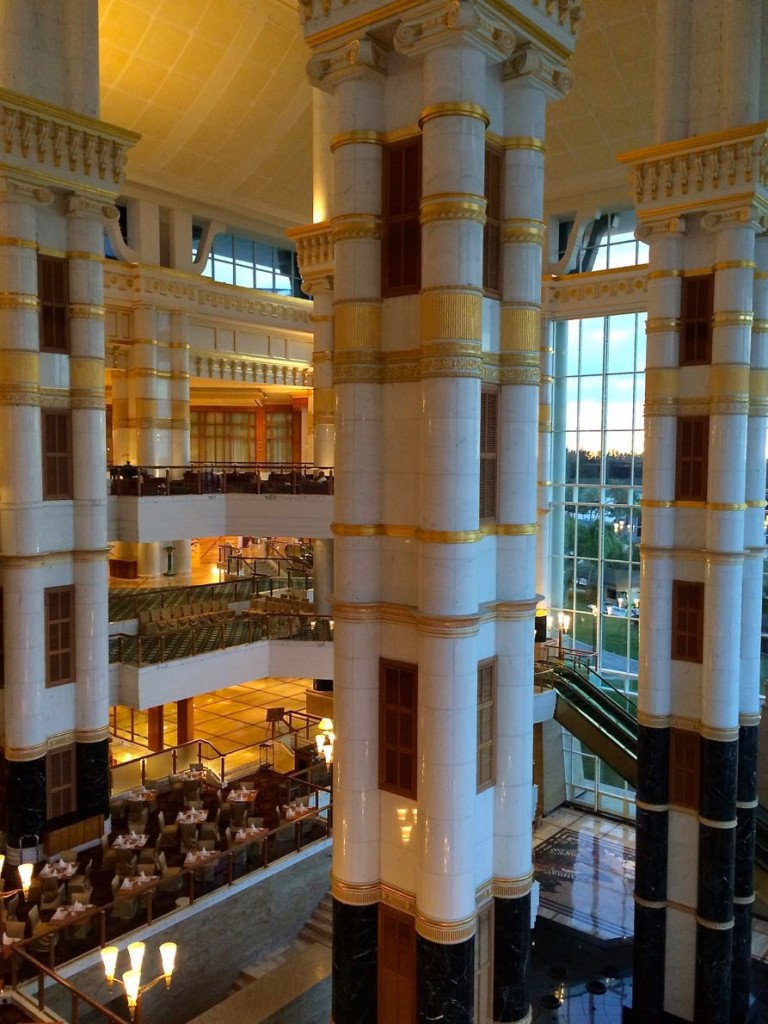 We also had a look inside the Emperor’s Suite, where the likes of US president Bill Clinton have stayed. Two things stood out for me there – the $500,000 crystal camel ornament, and the indoor pool, complete with projector screen so you can watch a film while you swim.

And when we entered our spacious room, with an equally large bathroom with gold taps and fixtures, the theme continued. The Empire certainly makes a statement, and with eight restaurants, a Jack Nicklaus-designed golf course, swimming pools, beach and numerous boutiques, it is truly a destination in itself. 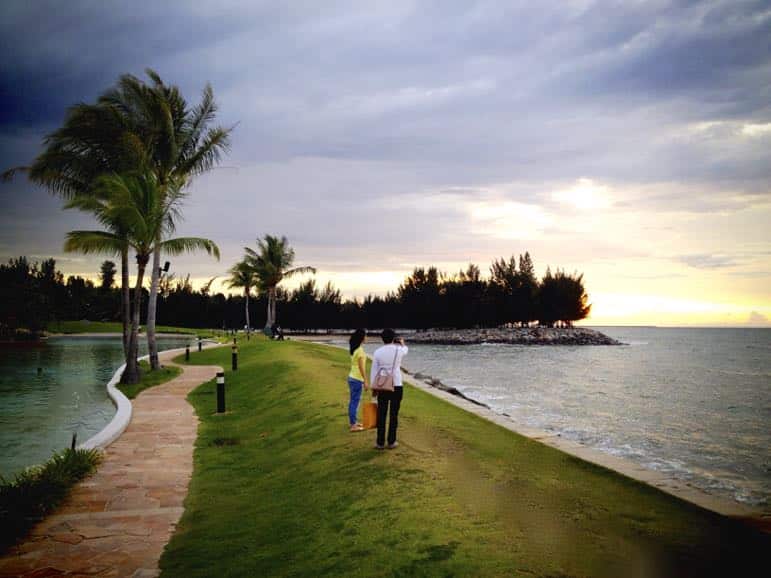 Brunei is not a place for the party crowd or to have a wild time – it’s a dry state, so you won’t even find alcohol on sale at The Empire. And there’s not so much to do to make it worthy of a week or more in Bandar Seri Begawan. But for those that appreciate history, cultural and enriching experiences it’s a fascinating short stay.

We visited Brunei as part of a project with iambassador, in partnership with Royal Brunei Airlines. As always all opinions are our own.