Home    Luxury Holidays    Europe    Spain    Welcome to the city of pleasure: why San Sebastian is Capital of Culture (and food) 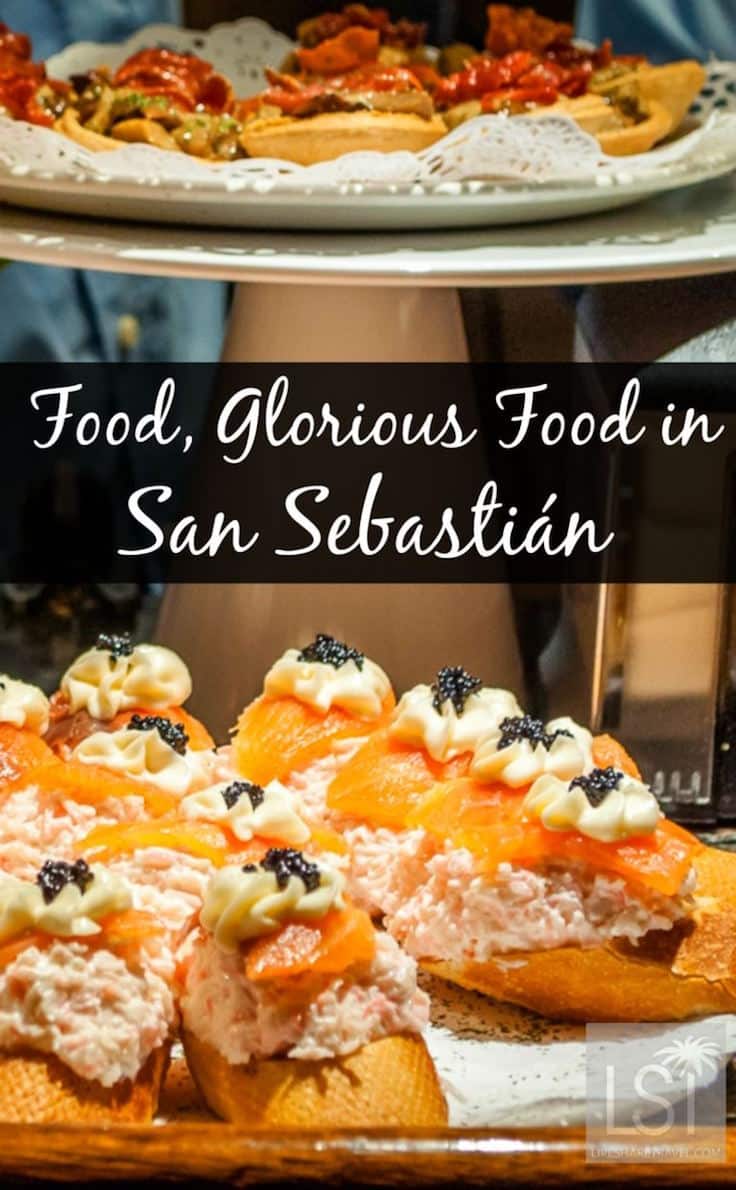 San Sebastián had impressed itself upon me long before I visited. Mention this year’s European Capital of Culture, especially to those who have already been to the popular regions of Spain and they would sigh a wanderlust-filled sigh and say how much they too wanted to go to San Seb.

Similarly, those who had already visited would sigh a wanderlust-filled sigh. “You’ll love it,” They’d say. “And oh… the food!”

San Sebastián is serious about food. “You don’t put jamón in the microwave – that’s a crime,” we were warned at one eatery. And there was a sense that they were quite serious. That in this food-fuelled part of the world there could be penalties for crimes against great grub – that one could be sent to Jamón Jail.

But it’s no surprise locals are so epicurious and ‘epi-serious’ – the city has an enviable reputation for some of the best food in Spain, no, Europe. Oh what the hell, it would be no exaggeration to say in the world, even. Its restaurants have more Michelin-stars per square metre than any other city on Earth.

But this Spanish capital of culture isn’t only famous for its posh nosh – it also has long culinary and alcoholic traditions.

“San Sebastián is a city of pleasure”

A mouthwatering capital of culture 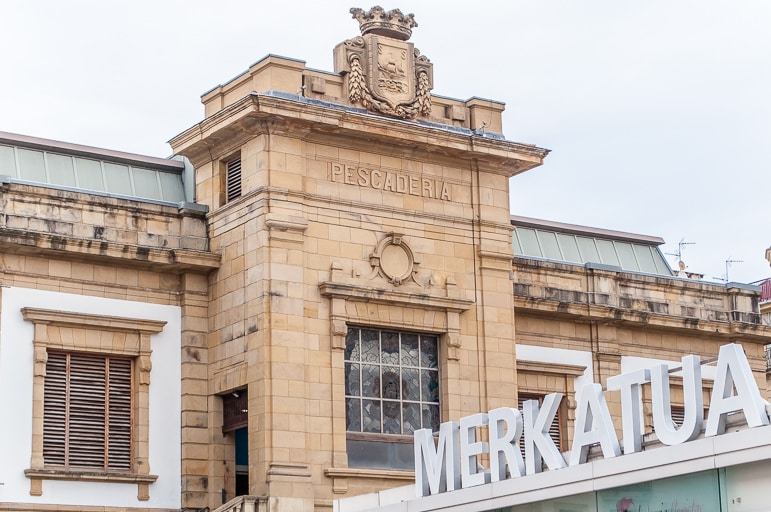 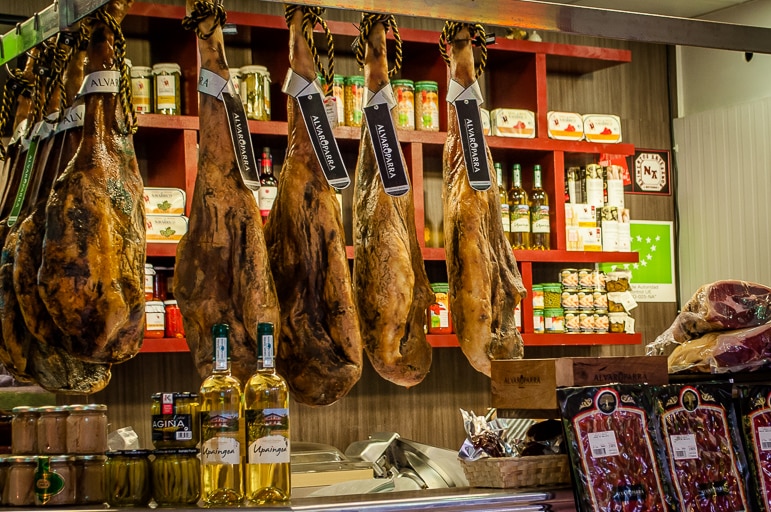 First there’s pintxos. Perhaps in other parts of Spain they’d be called tapas. But San Sebastián is in the heart of Spanish Basque Country, known for its own culture, language and traditions. An intrinsic difference between the two is that beautifully crafted pintxos are mostly served on chunky slices of bread and have a stick through the middle. You eat as many as you wish then a waiter will count up your sticks to give you your bill. And the beauty of it is pintxos aren’t just as tasty as they look – they’re also very, very affordable – many starting at just €2 a stick.

Eating pintxos is more than just a bit of lunch or dinner, it’s an adventure into the character and culture of San Sebastián. 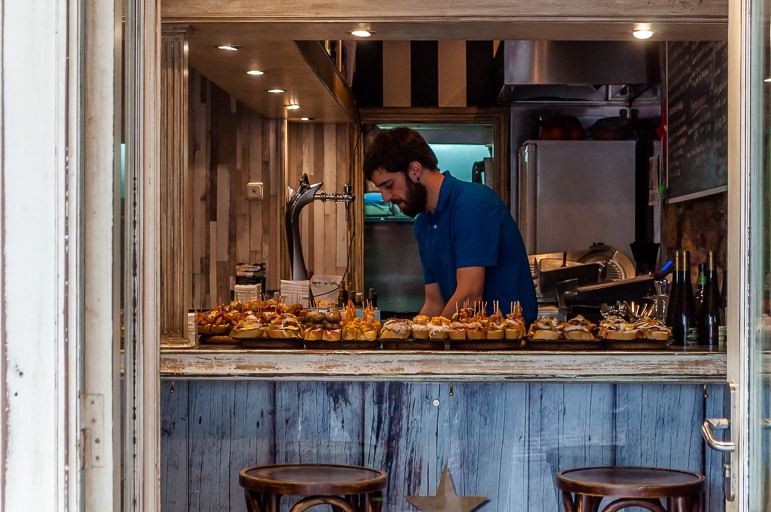 You can eat them on any day of the week and at any time of day. But head to the old town of this capital of culture, in and around Calle de Fermín Calbetón, on a Saturday lunchtime and you’ll find it thronging with locals. 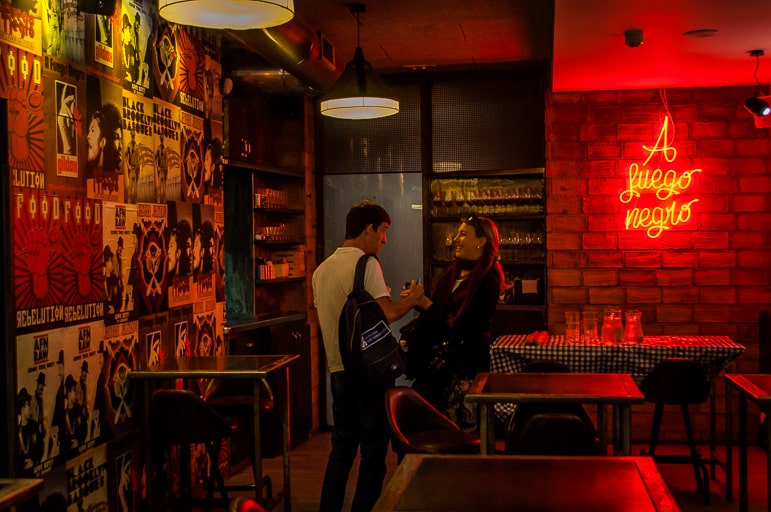 We started our tour at A Fuego Negro, one of the best known spots in the city, where we first discovered a pintxo with a story. The Gilda is one of San Sebastian’s best-known bites – a green olive wrapped in an anchovy, fixed on a stick with the seductively waving arms of a pickled chili pepper. 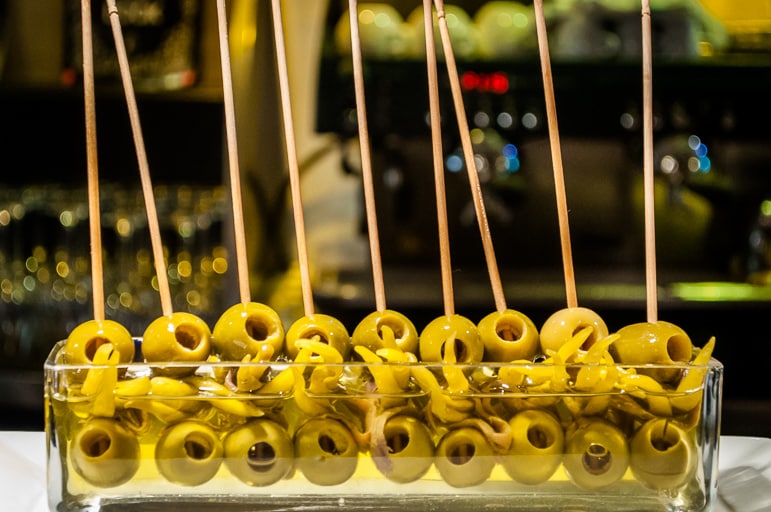 I say seductively waving arms because that’s just what the peppers signify. The Gilda was created soon after the launch of the Hollywood movie of the same name. Rita Hayworth’s seductress made an impression on all who saw her.

The only trouble was in Spain the film was banned under Franco’s fascist regime. With it creating something of a fuss at the time, local men had to sneak into France to watch this saucy screen siren. And in honour of the way Hayworth flung her gloved arms around in the film’s evocative dance scene, a local bar owner created the Gilda so men had something to talk about over a glass of cider or txakoli.

And here I touch on other unmissable San Sebastián experiences – its citizens’ favourite tipples – a natural, unsweetened cider, produced at famed cider houses, and my personal obsession txakoli – a mildly sparkling light, dry white wine. With its slight tanginess, it perfectly cut through the saltier pintxos dishes like the Gildas, making the two a match made in San Sebastián heaven.

Txakoli slipping down nicely I tried a couple of A Fuego Negro’s other pintxos of the day including sea anemone with a seafood sauce, before leaving its warm interior filled with fun vintage pop culture memorabilia, for a wander to another bar. 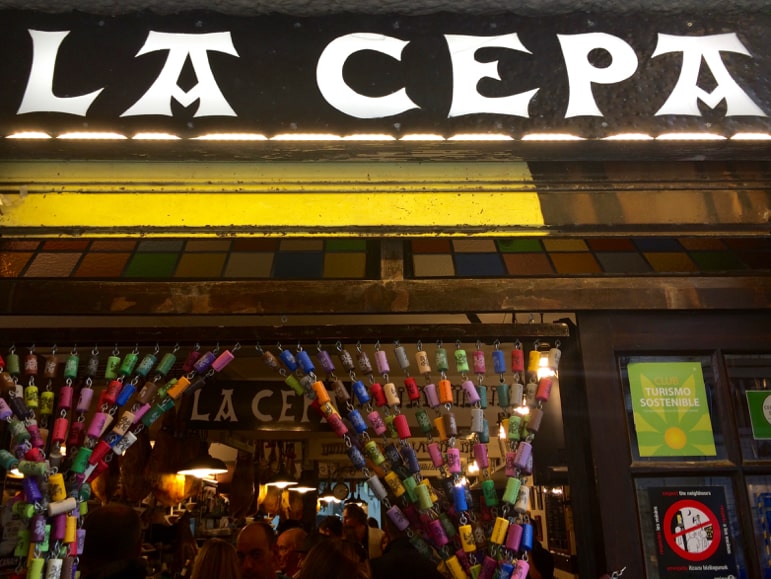 La Cepa was thronging with locals and provided a different slice of fun with glass tables filled with all manner of unusual attractions. I couldn’t resist the penny sweet table, though it was soon filled with more grown-up treats in the form of jamón iberico, pimiento de padron and more txakoli.

Indeed txakoli was a prominent feature of our weekend in San Sebastián – I developed a real taste for this easy-drinking wine. 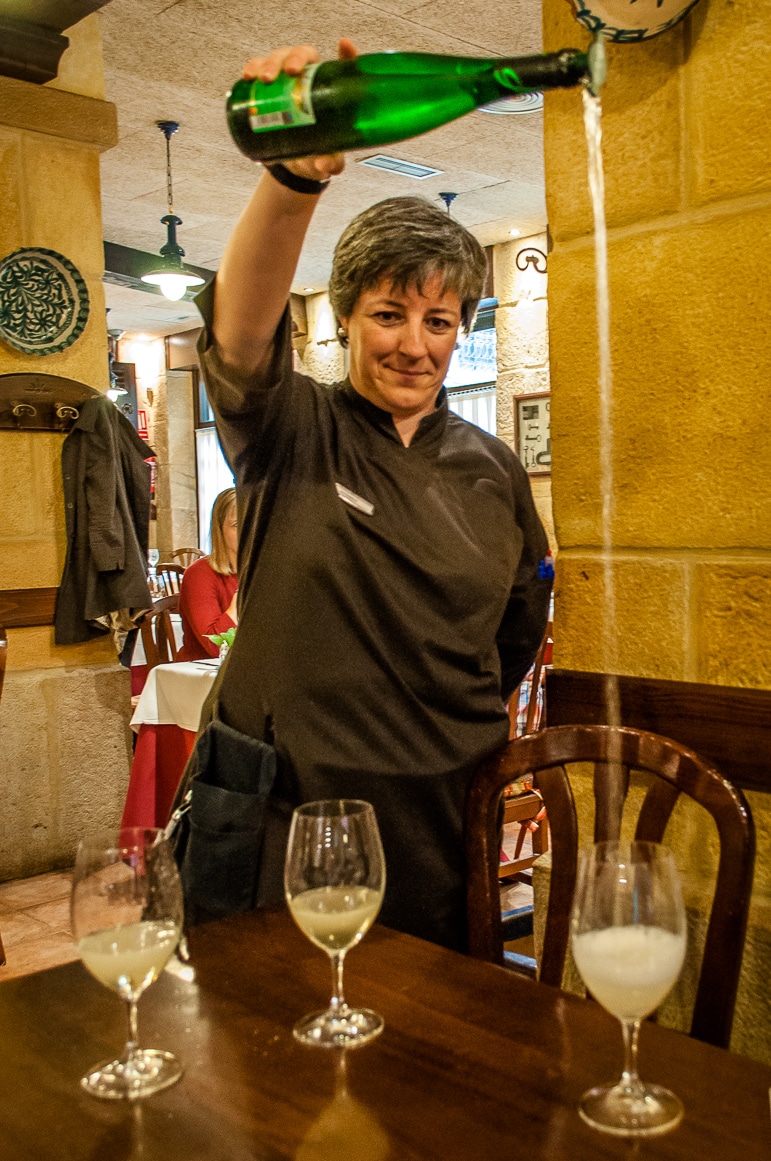 And at our next pintxos stop, Gandarias, we sampled the specialist skill of txakoli pouring. To aerate the wine in the bottle it is traditionally poured from a great height. We naturally had to try our hands at txakoli pouring and let’s just say that it’s harder than it looks, so I stuck to drinking my new found favourite tipple.

There’s just one thing better than eating local foods – learning to cook them yourself so you can make them back home.

I’ve taken many cooking classes around the world and always find them an immersive cultural experience, and our class at Tenedor couldn’t have been a better example.

The cooking experience is run by Gabriella Ranelli, a New Yorker lured to the city in the 1990s on a business trip who loved it so much she made it her home.

“San Sebastián is a city of pleasure,” she said, beginning to explain why she’s lived there for so long, and why visitors quickly fall for its good looks and coastal attractions. I haven’t even touched on its inspired architecture, spa culture, beaches and arts scene as yet, but will in upcoming stories.

Gabriella continued: “Yes, San Sebastián is traditional and there are many rustic areas near here, but it’s also sophisticated with an eye for design and has great bars and places to go out.”

In a fantastically fun, friendly, pintxos workshop in an apartment in the city’s old town l learned to prepare and cook Gildas, punky prawns (a version of panko prawns cooked in a vermicelli crunch), and deliciously stuffed red pimientos.

We regularly stopped for local liqueurs, vermouth – another popular tipple at Sunday family gatherings – and yet more txakoli. Gabriella described it as a “morning wine” alluding to the fact local working men would drink it after finishing their morning tasks. We felt it was ok to drink it throughout the late morning and well into the afternoon.

Gabriella, chef Iñigo, and assistant Catherine taught us so much. They revealed more about this capital of culture, and its food, highlighting just how much of its fine produce – from anchovies to cheese and wine is still produced by locals using centuries-old skills before it’s sold at farmers’ markets.

They also brightened our day with their fun insights and delicious dishes, before we sat to eat the fruits of our workshop, family style, around a large table.

Gabriella shared more insights into San Sebastián: “One of the things I love about living here is the people. It’s a very hospitable place – people want you to love their city and know the best about it. It’s a wonderfully decent place to live.

“I want people to know what the culture here is all about because it really is special. I started Tenedor in 1997 because I felt it was criminal that there were no cooking classes in a place like San Sebastián.” 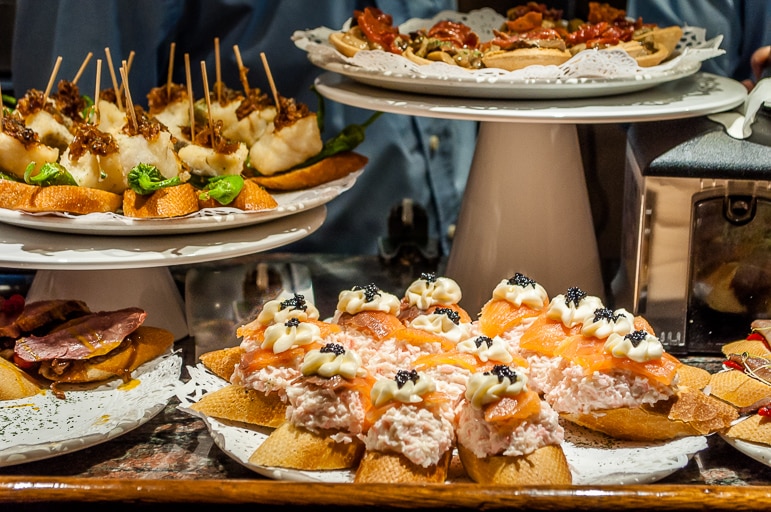 And after two days perusing San Sebastián, feasting on its culture and food, I had to agree. There is at least one thing worse than crimes against jamón, and that is not visiting this delicious city, and soon.

You can book a pintxos workshop just like the one we took with Tenedor. Fancy a guided tour of San Sebastián’s best pintxos? Go Local San Sebastián has it covered, with fun, informative tours that get you well fed on the city’s culture and food.

Hotel de Londres y Inglaterra – sea views and a delightful Englishness, this is the biggest and grandest hotel by Concha beach.

Hotel Zenit – four-star with plenty of modern comforts in the capital of culture, this hotel is a steal starting at just €70 a night.