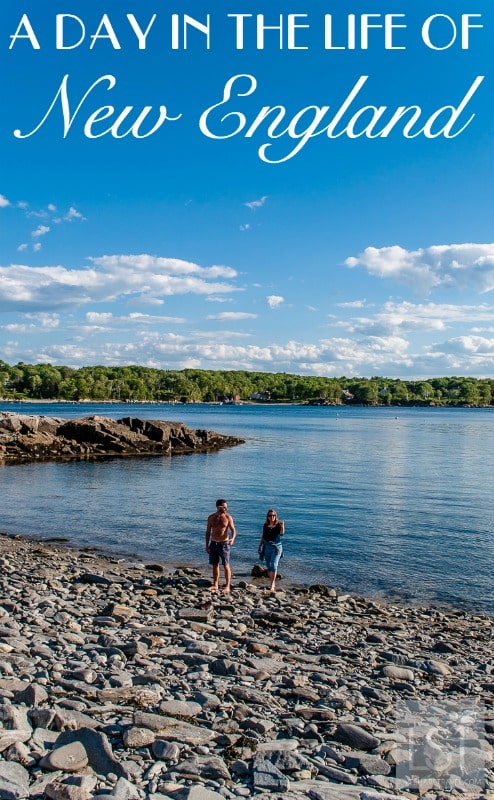 No matter how far or how often I travel it seems I never have enough time in any given place, and New England was no exception.

Perhaps that’s part and parcel of enjoying life on the New England coast. There the world slows down and the gentle nature of New Englanders helps ease you into their way of life.

New England is a funny area – one of these all encompassing regions of the US that takes in more states (six) than might be appropriate for the breadth of landscapes and cultural experiences it has.

Take for example Maine its French heritage and breathtaking, rocky hinterland; the bucolic Berkshires in Massachusetts, and alpine-esque Vermont. The New England states include big, bold, cities like Boston, and Bangor, Maine, with merely 33,000 residents.

But despite all these contrasts, my time in New England – hugging the coast from its historic towns of Plymouth and Portsmouth to Portland and Boston – revealed much commonality. 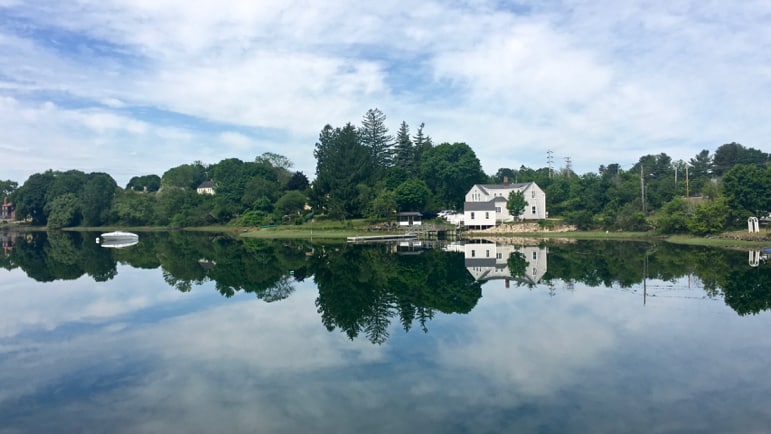 There’s a relaxed personality and refreshing spirit to New Englanders, that of coastal dwellers, who’ve discovered the secret to a happy life.

The hush of the New England coast

There’s a quiet beauty to the New England coast. Sunlight sparkles across the Atlantic seeping life into the day, lighting the path of lobster fishermen as they empty their pots. 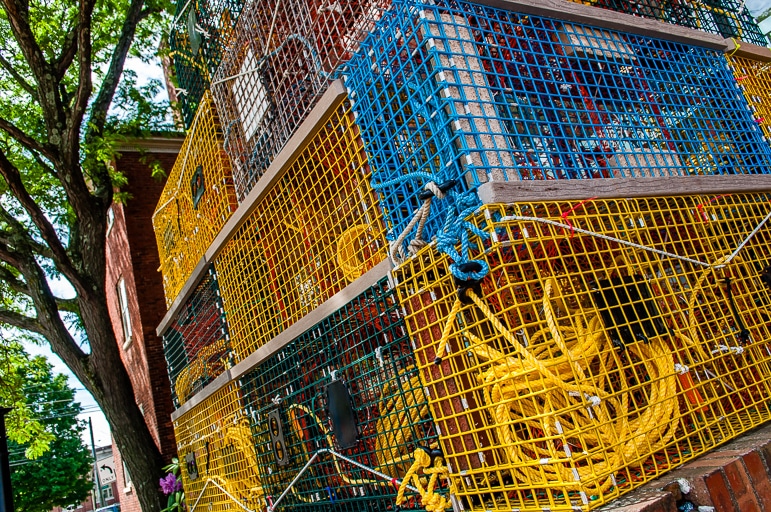 This is a seafood lover’s paradise. Restaurateurs and thousands of diners salivate over fresh oysters, lobster rolls, crispy calamari and delicately grilled scallops every day. And it’s this coast and the early rising fishermen that they have to thank for such a bounty. 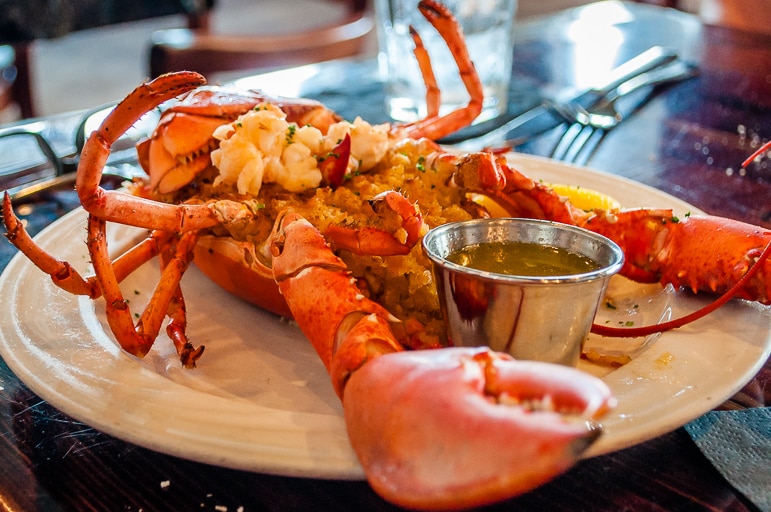 As the summer sky brightens to blue and the fishermen perhaps tend their boats before returning home, the rest of the New England coast awakens.

Breakfast time may be characterised by seafood benedict at the John Carver Inn, in Plymouth, Massachusetts, with a side of home fries or fruit, and coffee – there’s always coffee.

A whale of a time

As the day comes to life, so does the ocean.

The promise of spotting whales in the wild has lured me onto many a boat around the world and on each occasion I’ve been disappointed. Either the whales haven’t wanted to put in an appearance, or there was an underwhelming display of small pilot whales.

But New England had other ideas.

It was a long journey out to sea from Plymouth with Captain John Whale Watching to the best sites. But I enjoyed the near two hour sailing in perfect conditions, the ship floating along on the still sea. 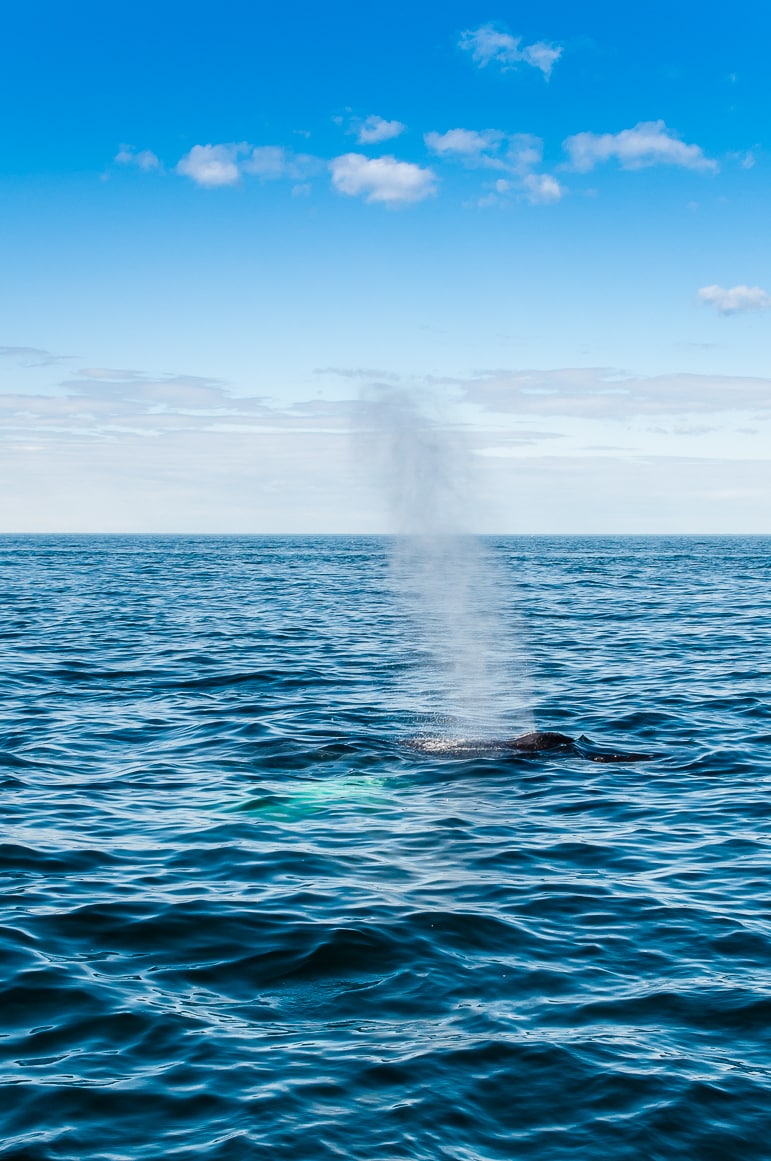 Our captain scanned the horizon for water shooting skywards from a whale’s blowhole, signposting his journey. Soon my eyes moved left to right across the wide expanse of sea. Until, suddenly, there it was – a finback right in front of me, skirting to the surface before disappearing beneath the waves. 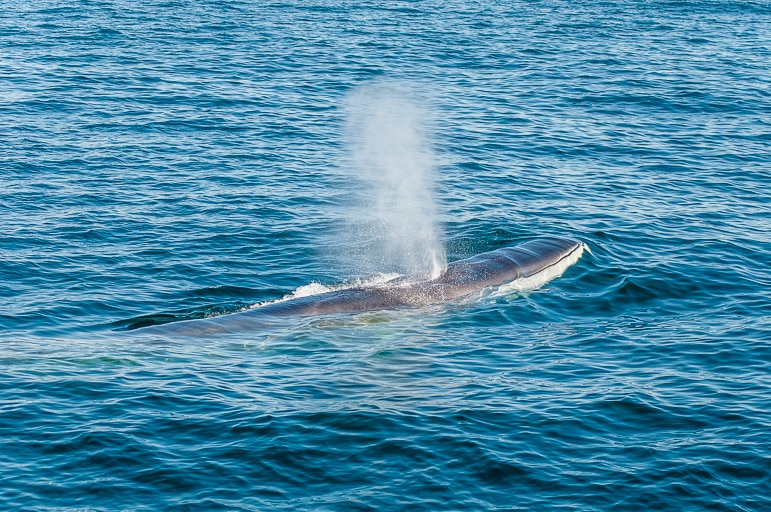 And this wasn’t a one off – more finbacks joined us. Then Minke whales, coming to the surface to show their size and majesty.

Next Captain John joined the one other boat in the area. It was surrounded by seabirds – a sure sign, we were told, that we were in for whale feeding action. 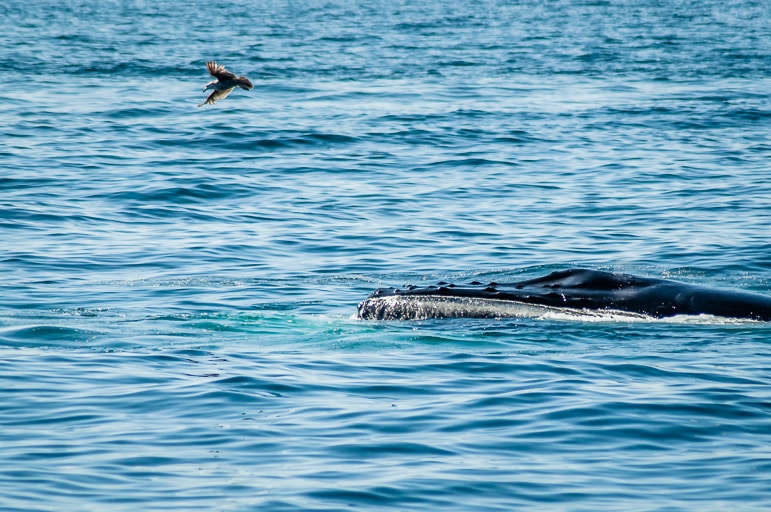 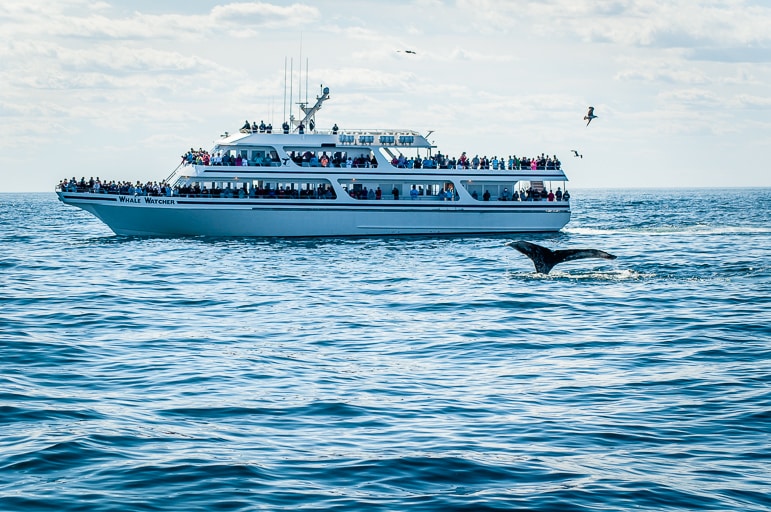 Within seconds I let out a sound of glee as I saw my first humpback whale rise to the surface, mouth open to catch as many small fish as possible. Its massive body looped back down into the water to leave its tail hanging in the air for a few thrilling seconds. 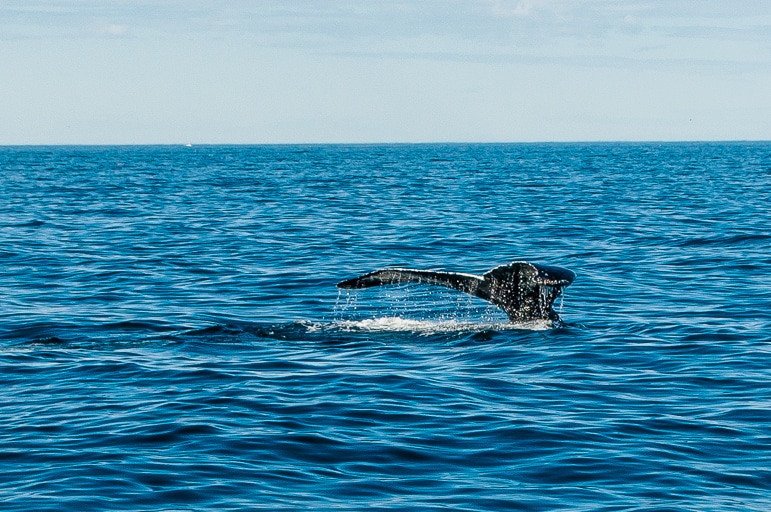 There were a few humpbacks in this area, and even a basking shark put in an appearance right below me. We stayed for a while each of us in wonder at the wildlife show around us. 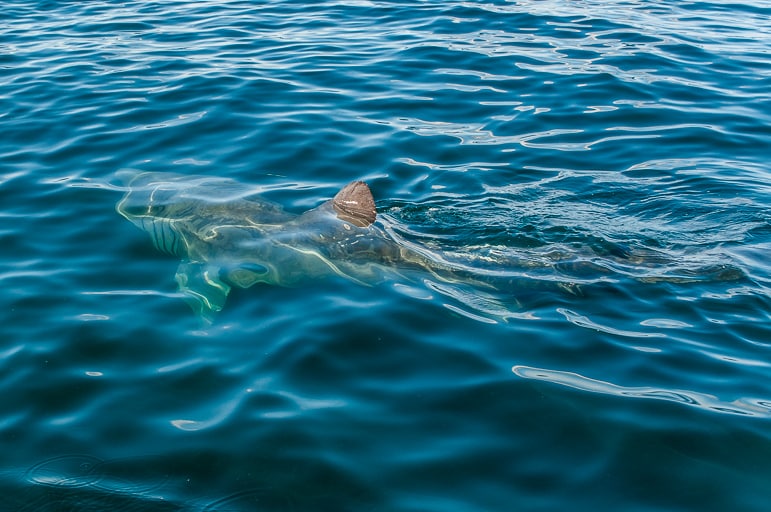 We eased on down the road, taking in just a little of Maine’s crocheted coastline

Back on land – there’s yet more to explore. Modern day America could be said to owe more to the history of New England than any other region of the country. It’s Maine where the first European settlers arrived from France. But it’s in Plymouth, Massachusetts, where the story of the first pilgrims took shape. 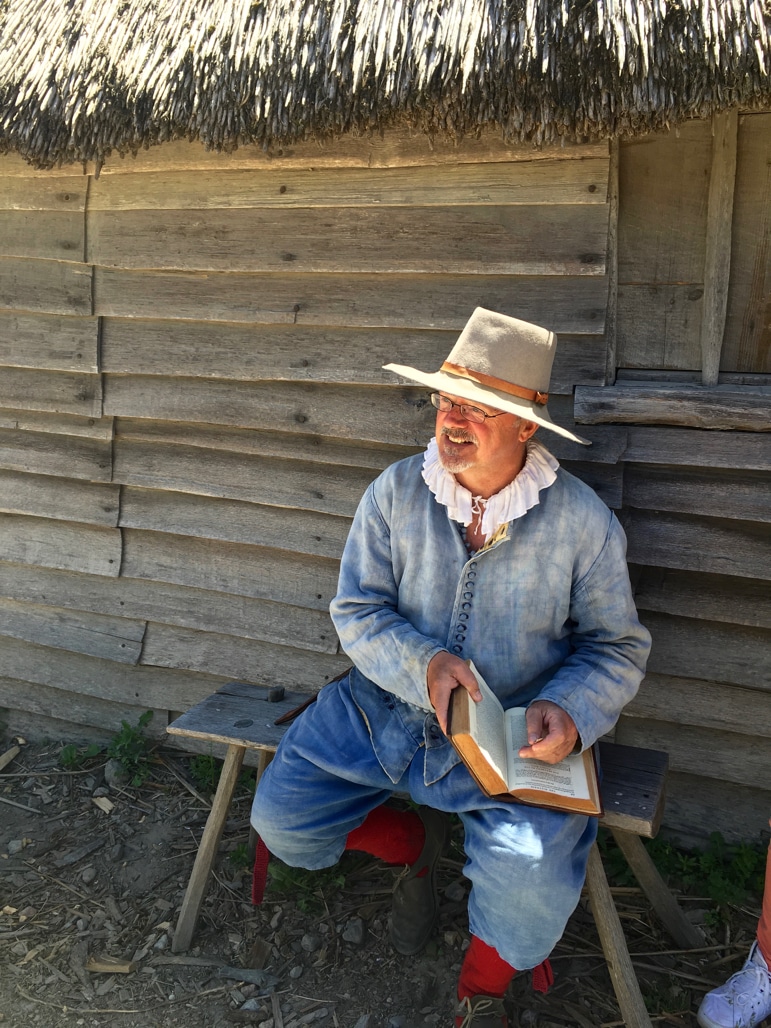 It was in Provincetown Harbour, Cape Cod, that the ship the Mayflower came ashore in 1620 after its voyage from England. But its pilgrims eventually settled in Plymouth and it’s here that I saw two other symbols of the New England coast, and US heritage. 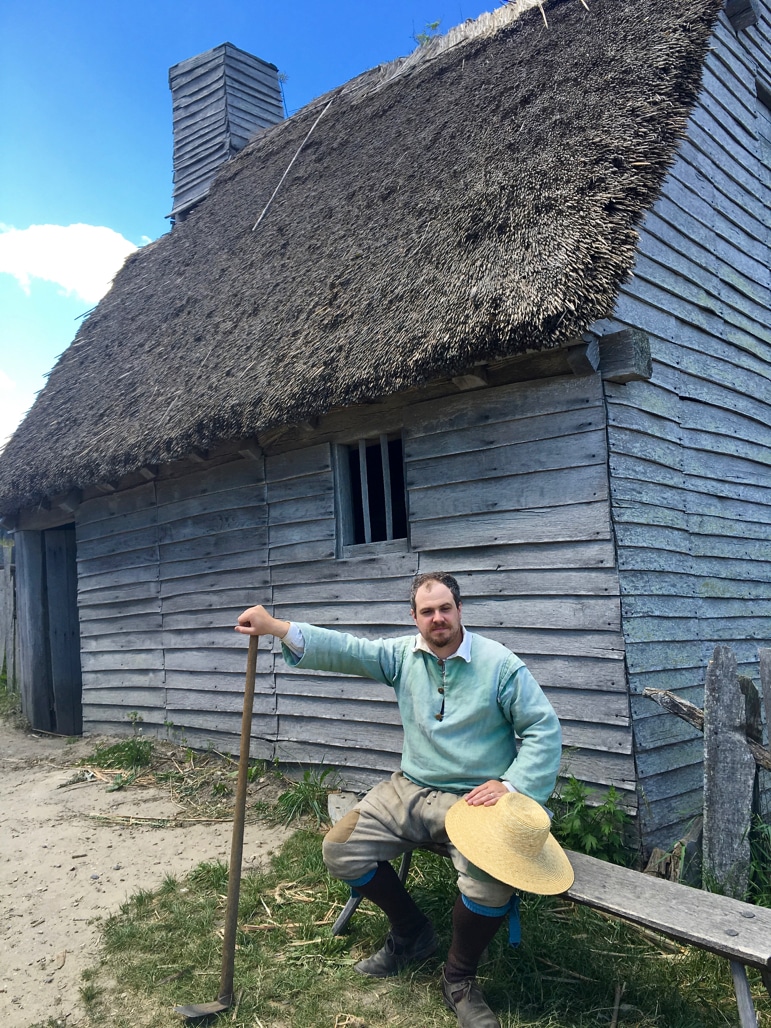 In truth the round, smooth boulder of Plymouth Rock – it really is just a smallish rock – isn’t something I’d rush back to see, but it is significant to the folklore of the region, even if questionable in historic reality. Close by is the Mayflower II, a replica of the original ship, whose story is brought to life by actors (with archaic, though equally questionable English accents). Even better though, a short drive away is Plimoth Plantation, which reveals more than just the old English spelling of the pilgrims’ story. 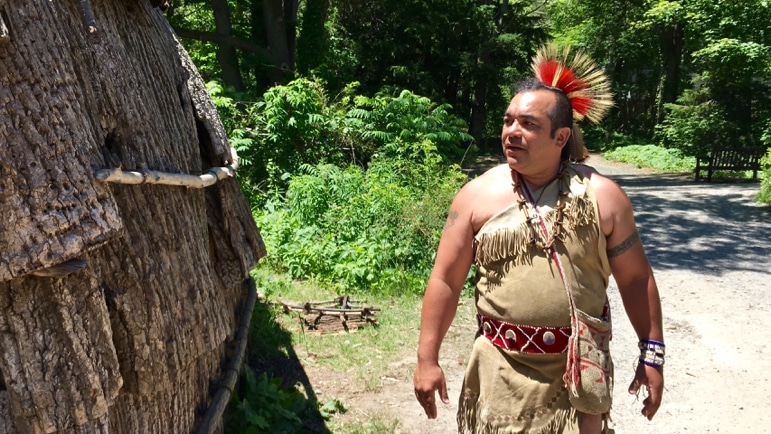 It’s a place to learn about the pilgrims and native Americans that lived there in the 17th century. But also about New England society of old and how this has shaped its culture today. 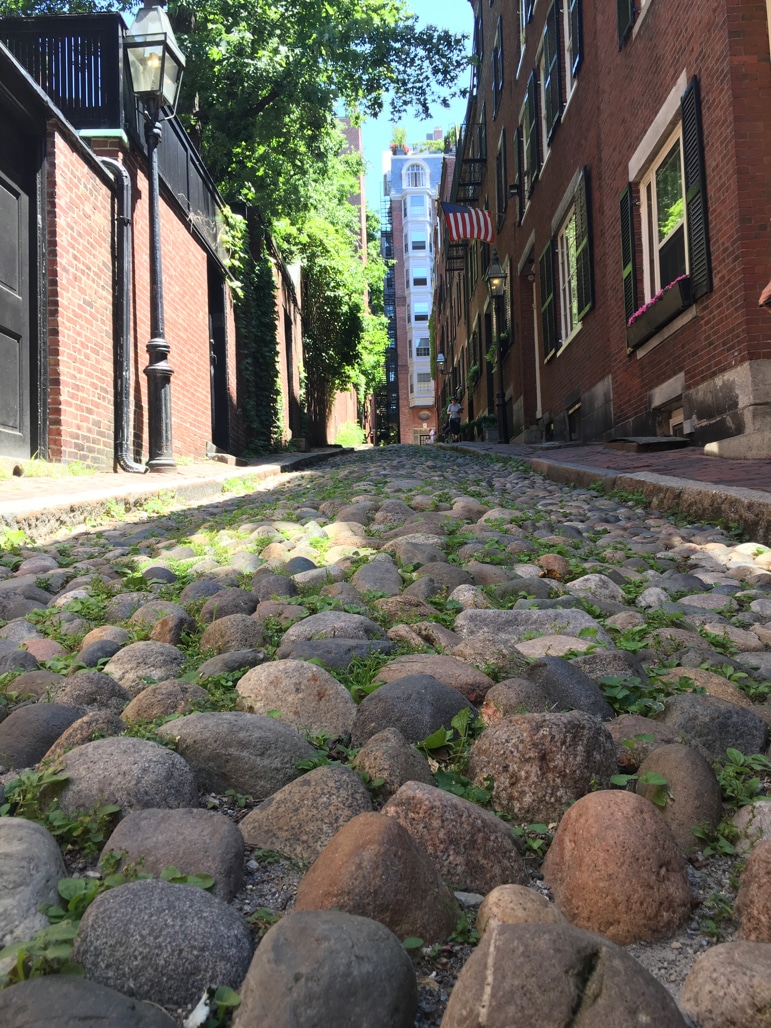 The story of New England, in fact that of the whole of the US, continues in Boston, where I had an all too brief but enjoyable sun-filled day wandering lovely quarters like Acorn Street and Boston Common. 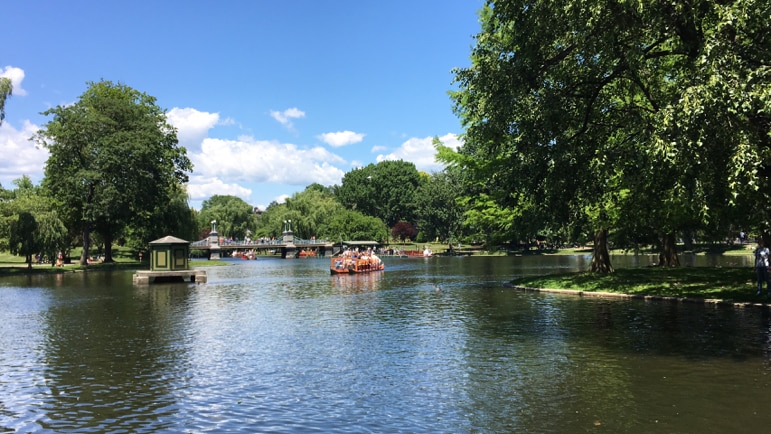 But there was also 400 years of stories and characters to discover, from revolutionaries like John Adam to the likes of John F Kennedy.

Boston’s Freedom Trail is the route for those seriously scouting out the history here, and take a moment at the harbour to imagine all that tea stewing in the Atlantic after the (politically) riotous Boston Tea Party. 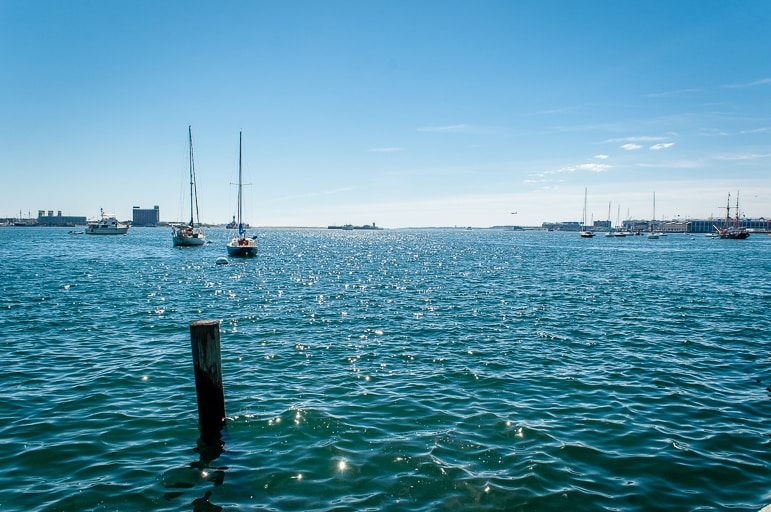 In Portsmouth, New Hampshire, I hit the centre to marvel at its architecture and unravel its past. It’s a town packed with history from that of those early settlers to its Jewish community and more recently discovered slave burial grounds. 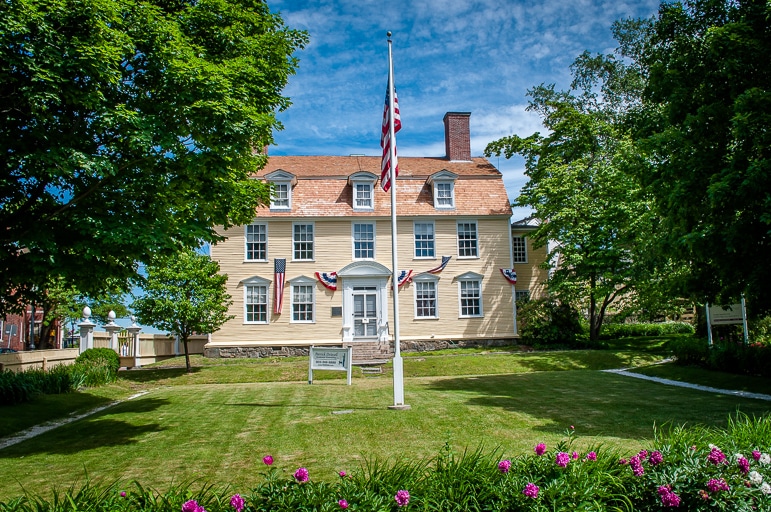 Escape to the islands

By the late afternoon it’s time for a rest, and there are few better ways to downpace and take in the New England way of life than to sail right out to sea. But not too far. From Portland, Maine, it’s just 15 minutes by ferry to the barefoot bliss of Peaks Island. There are few cars on Peaks Island, but there’s no need to race around.

Instead enjoy the silence of pedal power by hiring a bike, or for something a little more racy, you can hire a golf cart for $25 an hour. Naturally we did the latter, topping out our afternoon adventures at about 20 mph.

But the New England coast eases you into the mindset of slow travel. 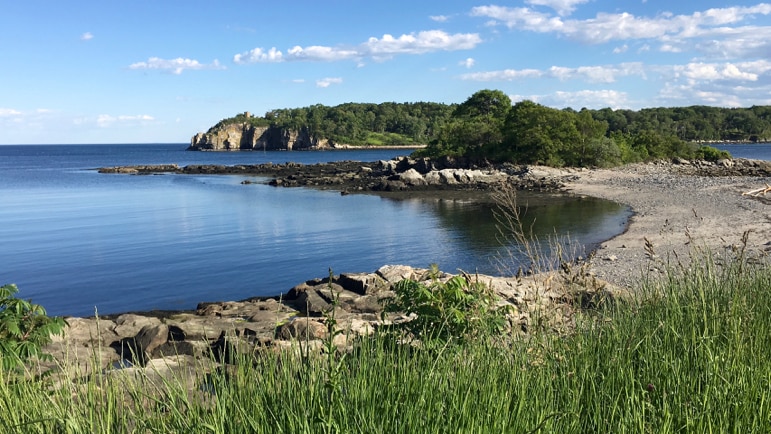 So we eased on down the road, taking in just a little of Maine’s crocheted coastline. Halfway round the Peaks’ ring road we paused for broad views of its bays and to shuffle on shingle and dip our toes into the cooling Atlantic. 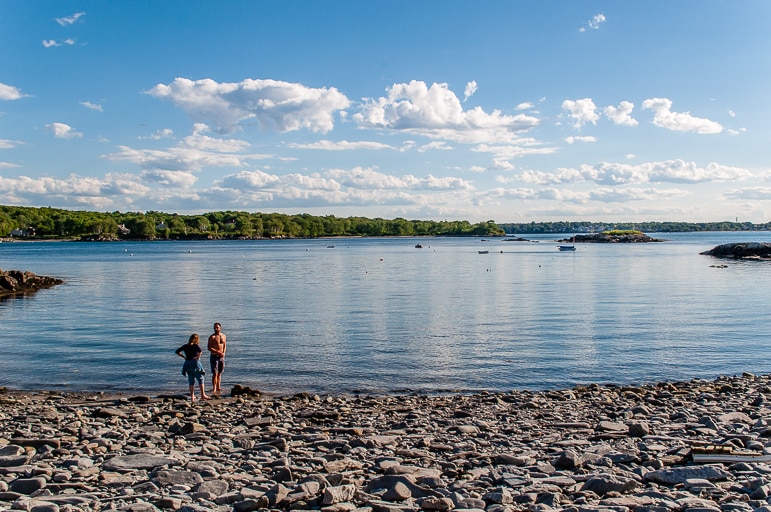 Nearby a group of elderly men sat on the porch to a house, shooting the breeze, and sipping on beers. Handing back the keys to our golf carts we stopped for beers too before taking the ferry back to Portland. 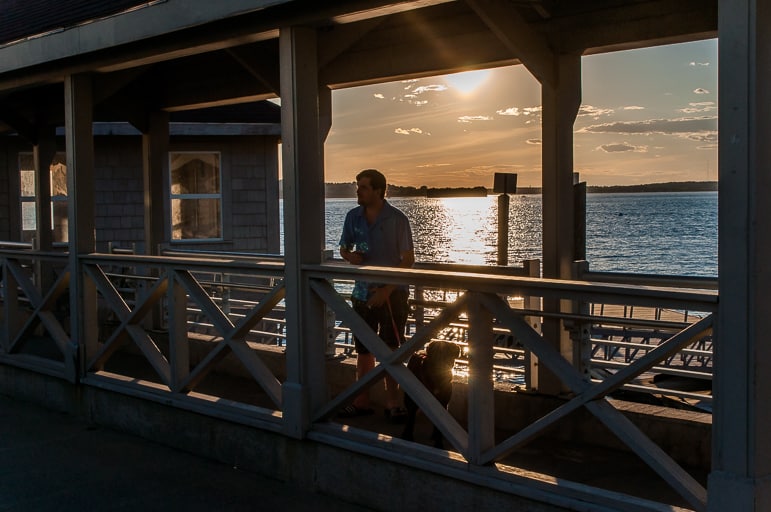 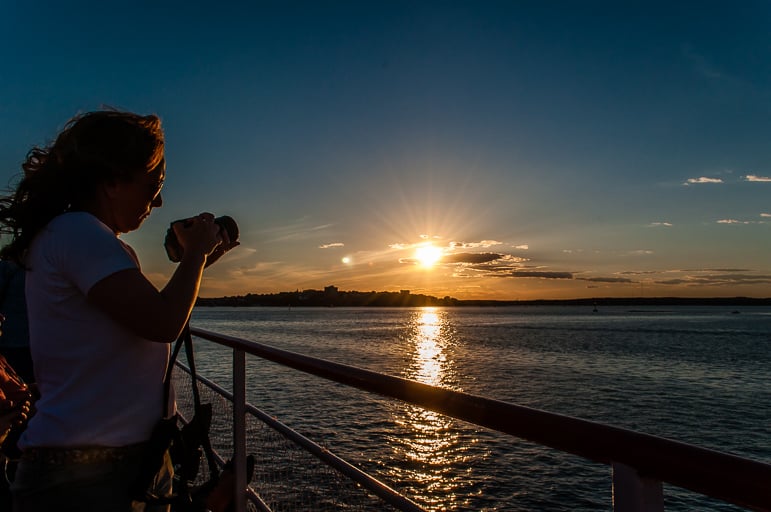 As evening falls on New England the cool corners of Boston and Portland spring into life. The North End of Boston is where hipsters hang, while Portland keeps it real with down home rhythm and blues bands. 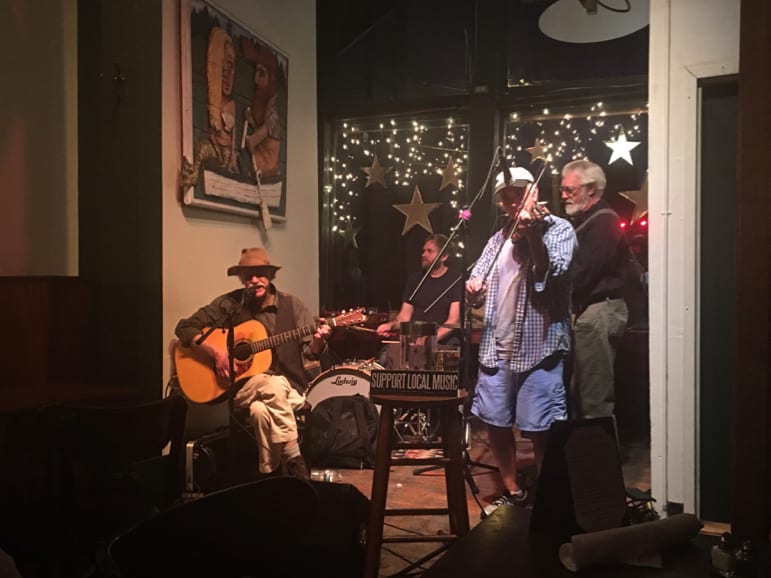 While in the country, where cicadas chirrup, there’s wine to be tasted at family run vineyards like Westport Winery in Massachusetts and other libations at Flag Hill, in New Hampshire. 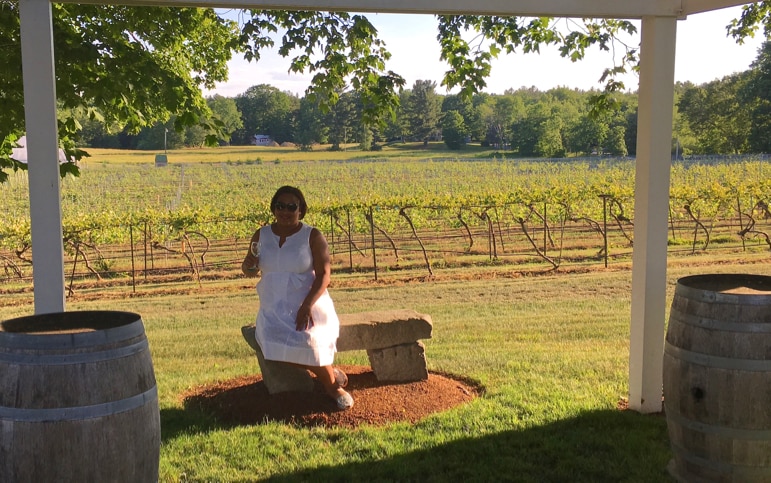 There too we enjoyed the fruits of the sea with a French flavour at the delectable Mirbeau Inn and Spa’s bistro, in Plymouth, and the eclectic Epoch, in Portsmouth. It serves everything from beer battered fish and chips to Korean chicken wings. But I know it as home of some of the best scallops I have ever tasted.

Heading for home, a shuffle through my mental images of the preceding days paused on a sign I’d seen in Portland: “May you have fair winds and following seas,” a perfect greeting to send travellers, I mused. And also a fitting summary of the friendly nature of the people and quiet grace of the New England coast. 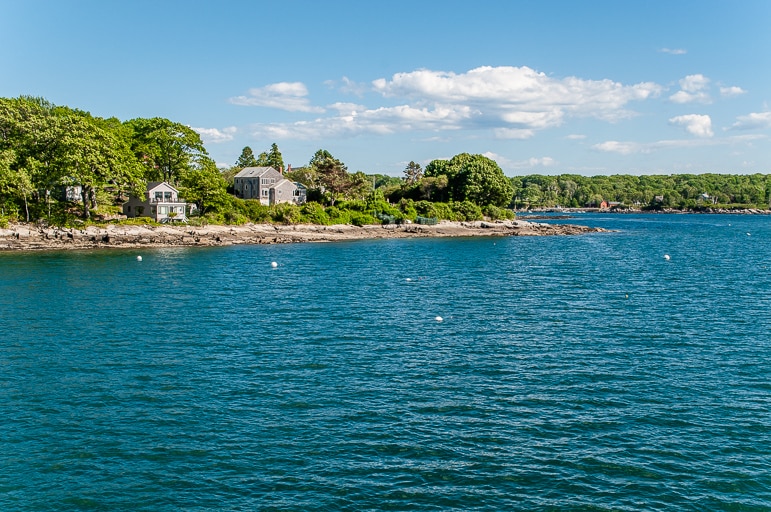 Where you stay depends on which New England states you wish to visit but I would recommend:

Mirbeau Inn & Spa for countryside escapism, close to some of the most historic sites in the US.

Breathing in nature, soaking up history – the lure of Lower Austria
7 places to go for Halloween for a spooktacular getaway