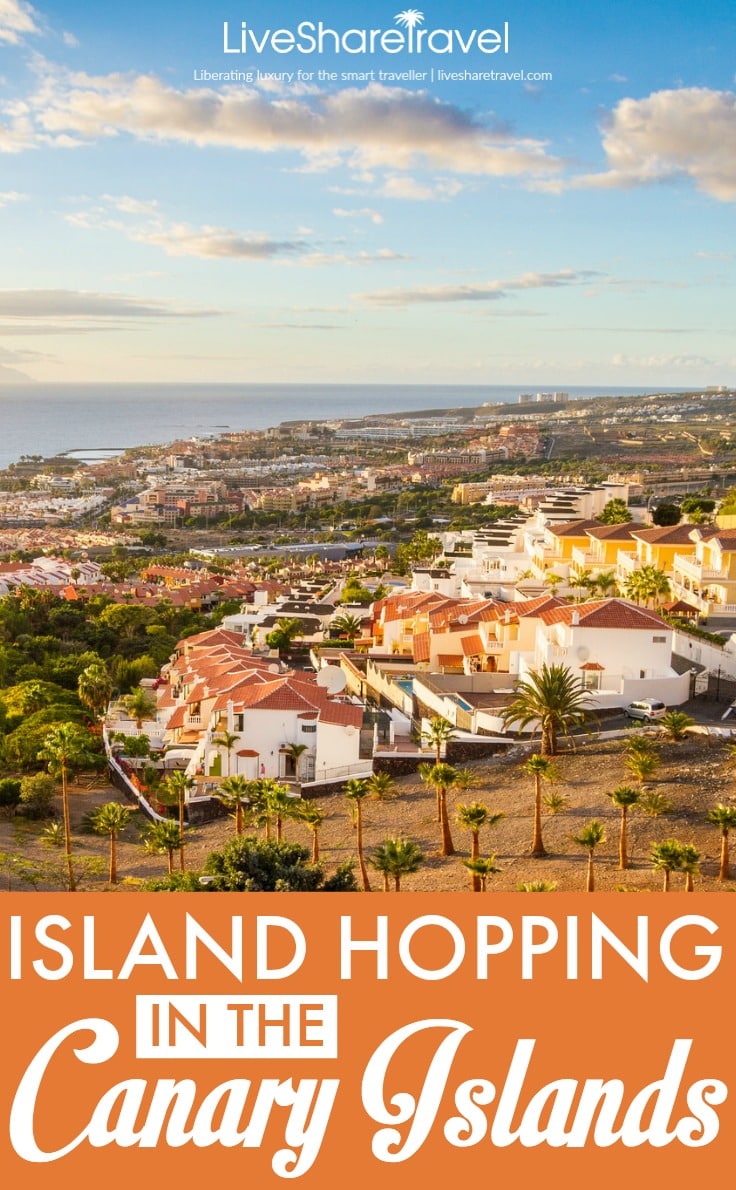 Glorious sunshine and golden sandy stretches have catapulted the Canary Islands onto the European hot list for a winter sun pick me up. While a week lounging by the pool is all-too-inviting, there are always benefits to mixing things up a little and exploring and there are plenty of great things to do in the Canary Islands.

Infuse a little variety into your break and fly or sail the Atlantic Ocean and you can easily visit more than one of this island group, each with an individual character that makes them intriguingly unique.

Start by making Tenerife or Lanzarote a base for your holiday and add a day trip to one of the other islands, or even spend a night in Gran Canaria, Fuerteventura, La Gomera, El Hierro or La Palma.

Here are some of the best ways to island hop, including some of the key things to see and do in the Canary Islands as a day tripper.

How to island hop the Canary Islands

There are a whole host of ways to explore the Canary Islands beyond where you are staying. Lanzarote and Tenerife are the most connected islands, so it’s best to make one of them your base.

Fred Olsen Express, Naviera Armas and TrasMediterranea are the main ferries sailing between the islands while airline Binter Canarias serves all seven of the islands, and Canary Fly links Gran Canaria with Tenerife North airport, the island of La Palma and Lanzarote. 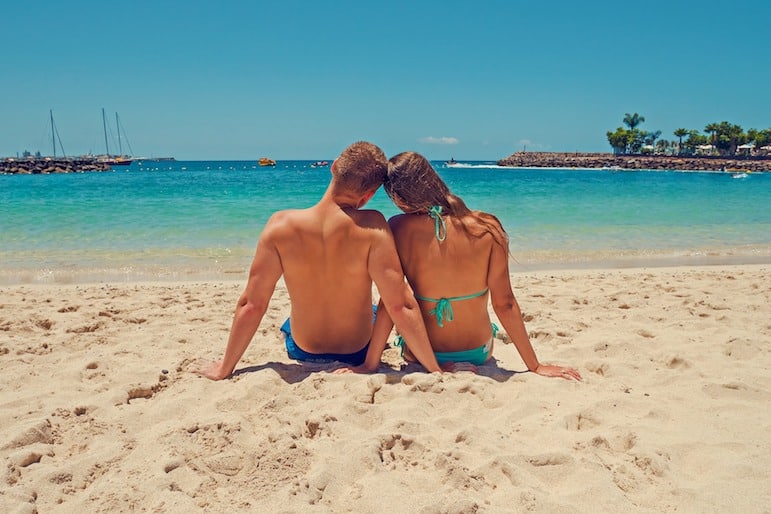 Here are the main island trips you can organise:

Where to go in the Canary Islands

Places to go in Tenerife

Tenerife makes a great base for discovering the islands, especially if you’re staying for more than a week.

There is so much to see and do in Tenerife. If you have a head for heights, Masca is a great location for hiking and revelling in the nature around you, while in Los Gigantes, you should book a dolphin or whale-watching trip for a mesmerising encounter out on the ocean waves. 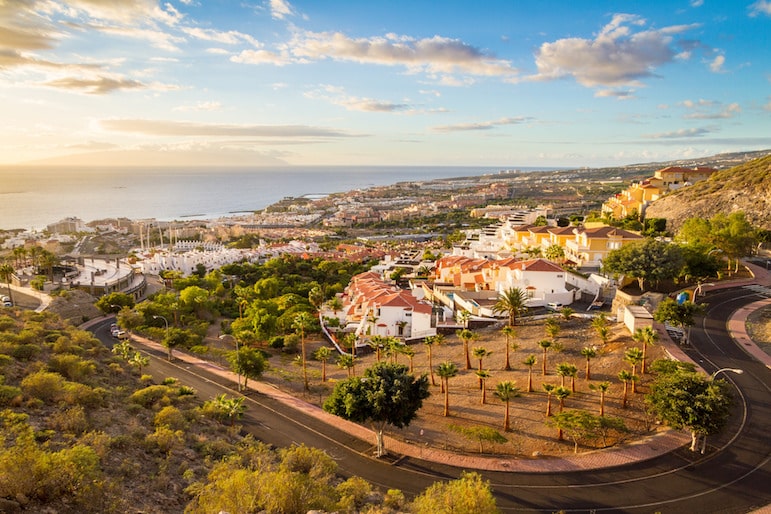 If you are towards the north of the island, pay a visit to San Cristóbal de La Laguna – a UNESCO World Heritage Site. Founded in the 15th century, the town is divided into upper and lower districts which represent a different time in history.

La Laguna takes its name from a lake that has long since disappeared, but today it’s regarded as the religious and cultural capital of the island.

Strolling the city’s streets, we were extremely impressed by its architecture. The town reveals its cultural depth as part of the Canary Islands and it makes a fantastic contrast from the sun-drenched shores of the island’s south.

As you will discover, the buildings here range from Spanish Mudéjar style to Neoclassical, Modernist, Rationalist, and contemporary architecture forms. We found it to be a fascinating encounter and it proved a living reminder of the melting pot of cultures that came to live and trade on the island. 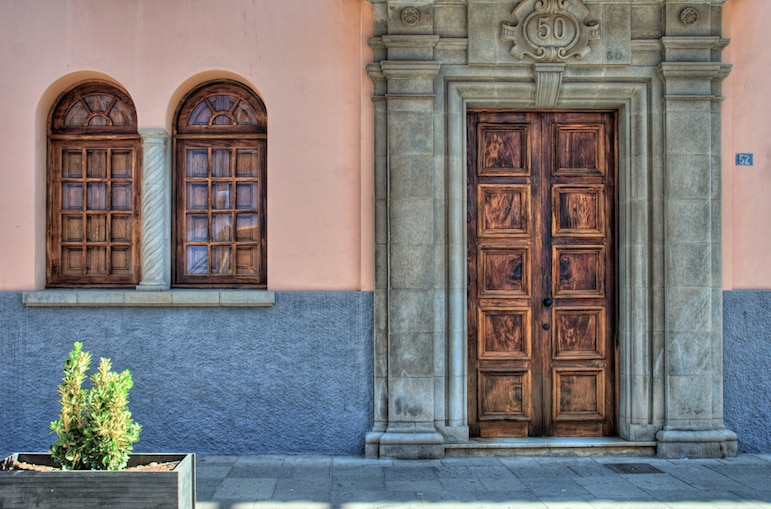 For equally visual appeal in the north, Garachico presents picturesque cobblestone streets, beautifully restored churches and a traditional Canarian character, especially in its main square with vibrant buildings and the iconic clock tower.

There are many luxurious things to do in Lanzarote, and beach and nature lovers will find much to love.

A volcano tour should come top of the list – it is known as the island of 1,000 volcanoes after all. But be sure to put a visit to Timanfaya National Park to the top of your list. It’s a barren landscape that’s barely changed in over 300 years. On a tour, you will pass collapsed lava tubes, the underground lab for monitoring volcanic activity, and experience a sense of desolation when you reach the top of the park and survey its wild, empty expanses. 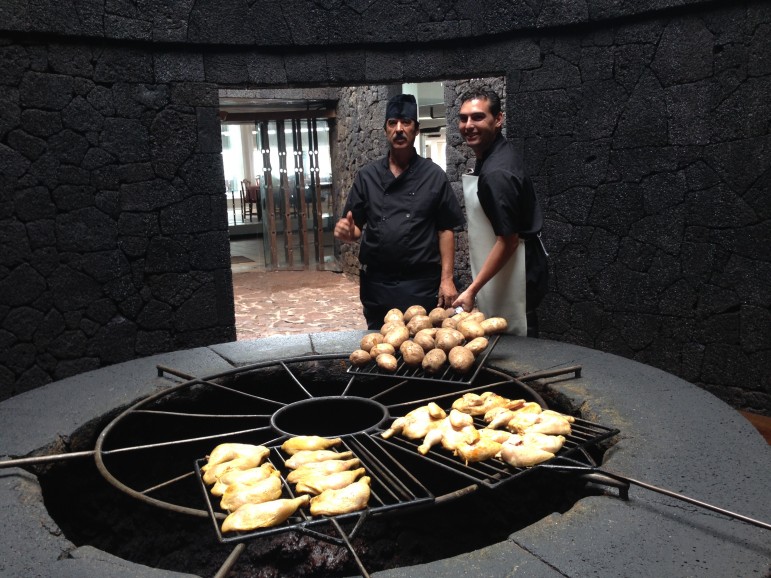 After your tour, stop off at El Diablo for the unmissable experience of having your lunch cooked using the geothermal heat from the volcano.

During your wanders across Lanzarote, you will be hard-pressed to miss works created by the island’s famed artist, César Manrique. View his efforts to fuse art with nature at Mirador del Rio for a heady view across the Atlantic, Jameos del Agua, and more sites perfectly depicting his creative principles. 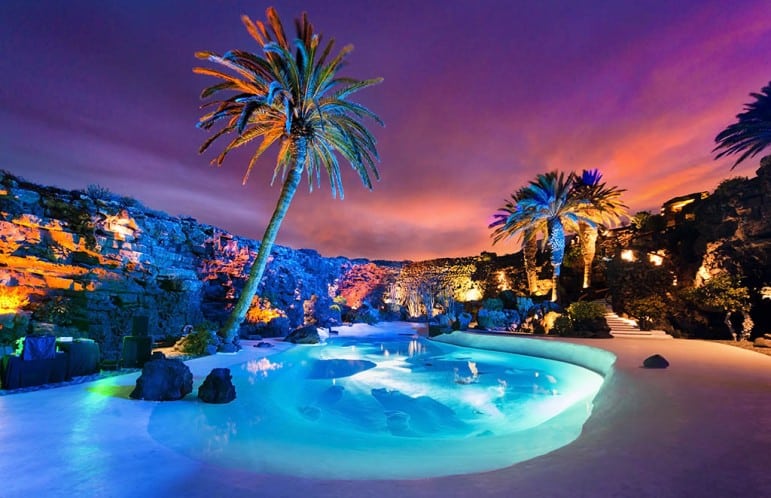 If you like something a little more exhilarating a half-day guided tour in a 4×4 around the desert-scapes of Soo will soon have you feeling the wind in your hair as you clamber over its mounds of sand.

On the subject of sand, Lanzarote is blessed with great beaches, Papagayo is a pristine stretch of golden sands, lapped by calm and crystal clear waters, their emerald green a striking element of the shell-shaped bay, but even the more touristy of beaches in the main resort of Puerto del Carmen are still wide and beautiful enough to make them worthy of a visit. 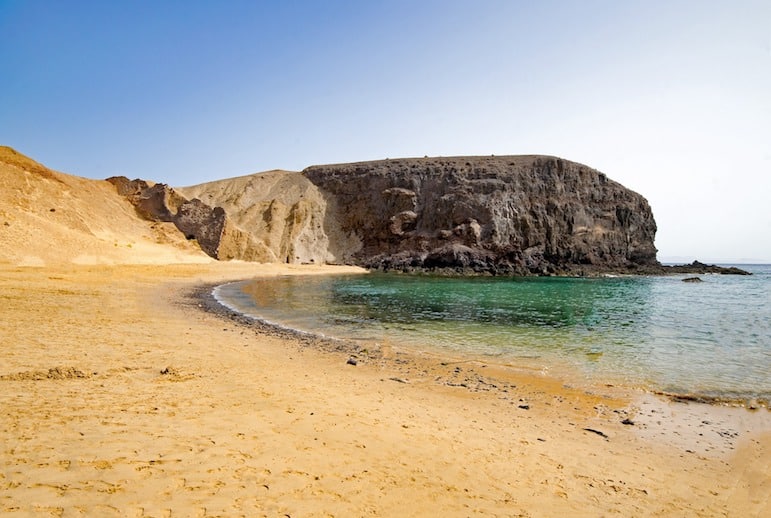 If you’re visiting Gran Canaria, you’ll want to be at the heart of the action, which means heading to Puerto de Mogán. The luxury port is lined with boutiques, and if you schedule your visit for a Friday you can pick up unique mementos at the market. Or just watch the world go by as boats gently bob on the water.

Jardin Canario, towards the north of the island, is the place for gardening inspiration with more than 2,000 lush, colourful plants to admire. You’ll have landscaped your garden three fold in your mind as you tour the gardens dotted with waterfalls, lakes and statues along its winding paths. 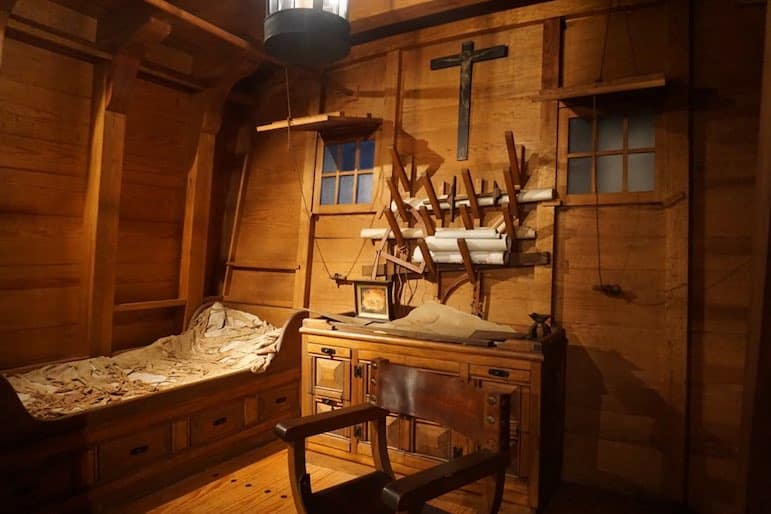 You can also follow in the footsteps of Christopher Columbus in the island’s capital Las Palmas, with a history tour which starts in Vegueta and includes a stop off point at his house, Casa de Colón, which is now a musuem. It charts his time on the island, with navigation equipment on display as well as models of the three ships he would have sailed during his explorations.

After your tour, take some time out in old world Vegueta and visit the hermitage, where Columbus is believed to have made his last prayer before travelling west, seeking out European new world discoveries.

Fuerteventura lays claim to the longest swathe of coastline of all whole archipelago. You can attempt to take in its scenery with a quirky chauffeur-driven trike tour courtesy of Cool Runnings.

Unusually Fuerteventura is the island for cheese lovers. Majorero is one of the main varieties produced here, and you can test it for yourself at one of the island’s cheeseries. 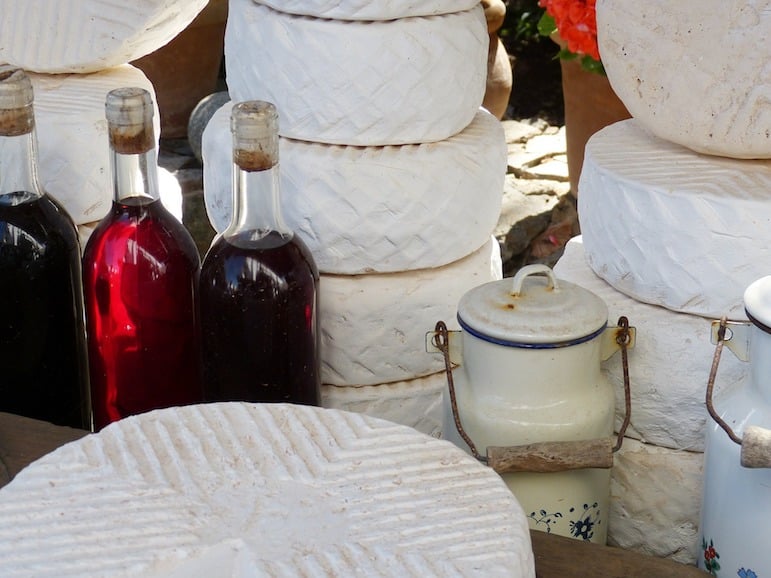 El Cotillo Beach and Lagoons has a TripAdvisor Traveller’s Choice Award under its belt and is a place you could comfortably spend some time before hopping off on your next Canary Island instalment.

This north-east sandy stretch has rock pools, a harbour, secluded coves and cosy shops and cafés providing a perfect stop for a leisurely few hours for the whole family.

Just around the coast prepare to be impressed by the Corralejo Dunes if you a looking for a dramatic photo opportunity. But with Fuerteventura well known for its perfect windsurfing conditions, it provides a great opportunity to get out and explore life in the water.

If you want more luxurious things to do in the Canary Islands, however, book a private yacht tour to Lobos Island from Corralejo. Soak up the views and sea breezes before anchoring at Playa de la Concha beach to swim, paddle surf, fish or snorkel to your heart’s content, before enjoying an indulgent lunch onboard.

Small but perfectly formed: more islands, more great things to do in the Canary Islands

Known as the pretty island, La Palma is the most north-westerly of the island group and considered its greenest.

If you love spending time in the great outdoors, escape the crowds and explore La Palma’s imposing volcanic craters and bountiful forests. Word has it that it’s also the best place to view a starlit sky owing to the island’s light pollution laws. The Roque de los Muchachos observatory is a must-visit for budding astronomers or for a romantic experience.

Enjoy a hike through La Palma’s trails and you will be rewarded with waterfalls and incredible views from the island’s peaks. Or if this is a little too energetic, some of the best snorkelling can be had amid the colour-filled reefs at Puerto Naos. 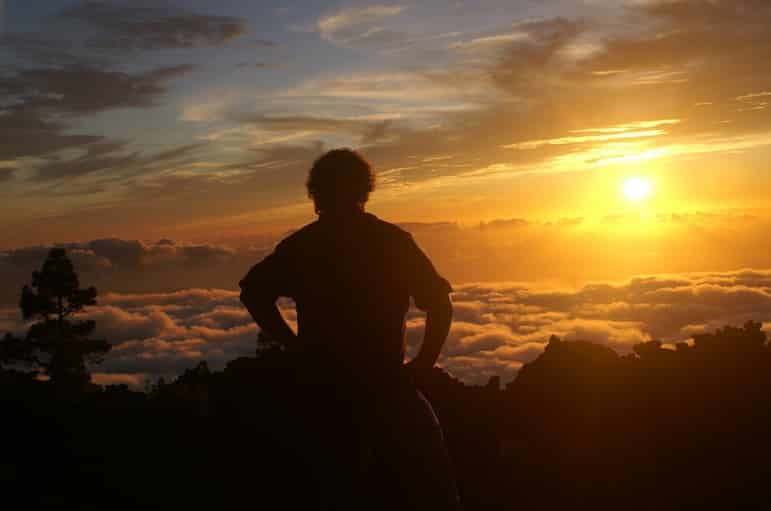 With beautiful Canarian style mansions, sunny fishing ports, a national park and glorious valleys, there are many ways to spend your time on La Gomera.

And after rubbing shoulders with your fellow tourists in Tenerife or Lanzarote, you may want to take a step back in time. With nothing but the sea, sky and nature around you, the rural life of hilltop villages and deserted beaches will make for a refreshing encounter. 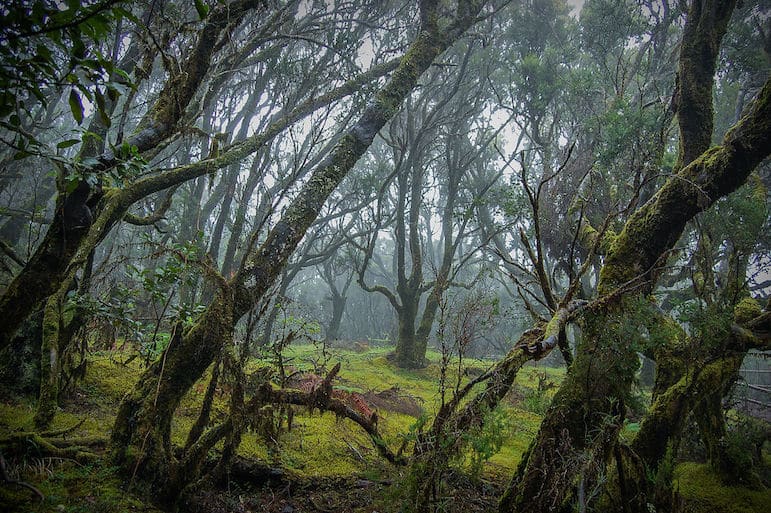 Keen hikers and lovers of the great outdoors will feel at home on La Gomera. Garajonay National Park is a good place to start to escape the midday heat as its green ancient laurel forests aren’t just evocative, they provide some much welcomed cool cover.

The park is something of a living fossil, as much of the flora and fauna here has existed for thousands of years. You can also book a tour to learn a surprising fact or two about the island’s history, including the life of the first settlers, and about the island’s sugar and charcoal production. 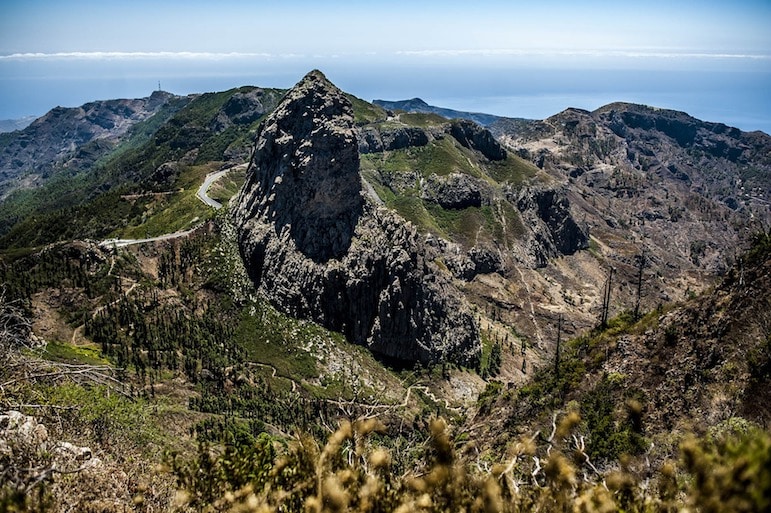 It may be the smallest of the islands, but it also provides the most charming and authentic taste of the traditional Canary Islands. El Hierro is nature’s paradise, home to a biosphere reserve laden with enchanting forests, a marine reserve, and striking volcanic terrain.

Keen divers should head for the clear waters of the marine reserve La Restinga, but if your goal is pure relaxation, keep it simple with a stroll around parts of the island which will prove to be a worthy step back in time.

Drink in the scenery of the north at the La Peña viewpoint which offers phenomenal views of the cliffside, volcanic plains and the Atlantic beyond. Millions of years ago a giant landslide took place here, which created the El Golfo Valley beneath it.

The viewpoint building was designed by Lanzarote’s César Manrique, and once again his fusion of creativity and nature has resulted in a cool yet cosy feel. Get the full experience and enjoy lunch here at Mirador de la Peña restaurant, with an extensive menu of local dishes infused with seafood and pineapple.

At the base of the valley lies some vineyards and orchards, so a sampling of the island’s wines is a must.

Carry-on luggage review – the best new hand luggage for your travels
Two Presidents, no army, but mountains of things to do in San Marino for luxury travellers