Having enjoyed a fabulous visit to Rimini two years ago, I couldn’t wait to return. My first time there provided an absorbing insight into a resilient people who embraced their long history and proud culture with enthusiasm.

Now I was returning and wanted to delve ever deeper into this corner of Italy that seems to endlessly move forward while celebrating the past.

After spending a few lovely days in Ravenna I started my journey for my next Rimini holiday. However, while on my way there, I took a detour to experience a new Italian venture in Forlimpopoli, a 2,000-year-old town in the northeast of Italy.

The first thing that excited me on arrival was the imposing 16th century Cardinal Albornoz’s Castle, which dominates the bustling main square. Beautifully preserved, it is a fabulous example of local ancient history. 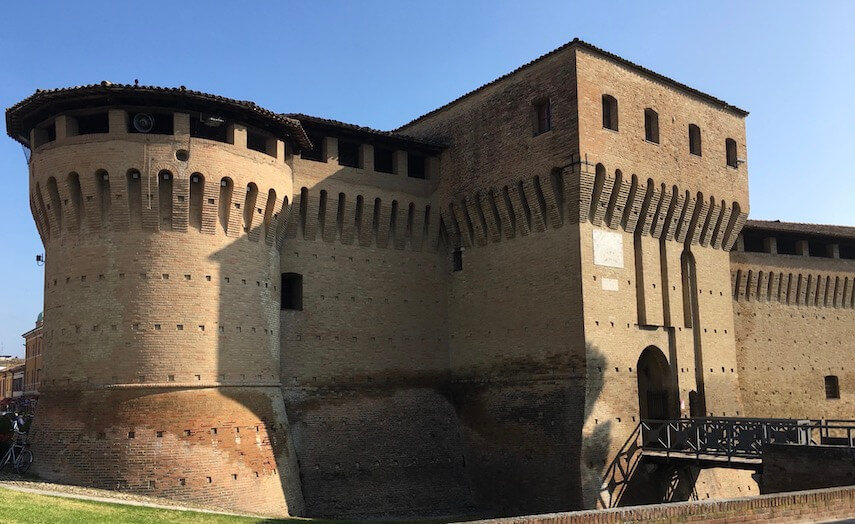 Nevertheless, I was there to visit Casa Artusi – a cookery school, restaurant and living museum to Italian home cooking. Set in a wonderfully spacious modern building that gleamed white, it is named after local resident and businessman Pellegrino Artusi, who many regard as the father of Italian cuisine. He had travelled around the world collecting recipes and his book Science in the Kitchen and the Art of Eating Well, which was first published in 1891, is thought to be Italy’s first cookbook.

In homage to the great man, in June each year, Forlimpopoli holds the Pellegrino Artusi food and wine festival. Each evening between 7pm and midnight, up to 10,000 visitors attend and enjoy the festivities.

The Casa Artusi Cookery School teaches traditional home cookery year-round though, and I was there to learn how to make fresh homemade pasta. Which if it was good enough I would dine on for lunch in their restaurant. No pressure then! 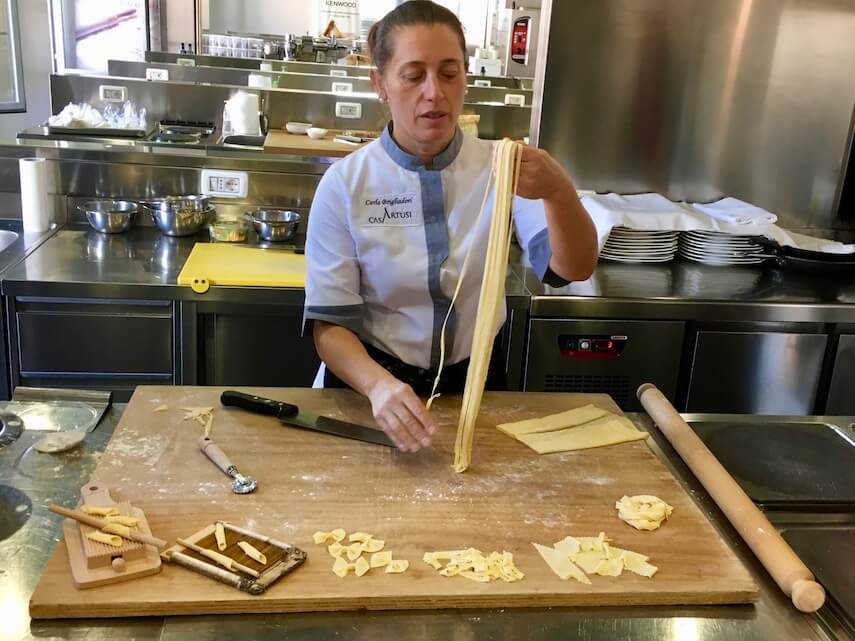 Casa Artusi’s engaging chef Clara Brigliadon led my pasta cooking class. She gave the class an overview of the process as well as a practical demonstration. Usually, their cooking classes are taught in Italian but the one I attended was in English (non-Italian classes need to be requested in advance).

During the actual making of the pasta, I was helped by a local lady, Roberta, who freely gives her time to assist in the kitchen with hopeless cases like me. 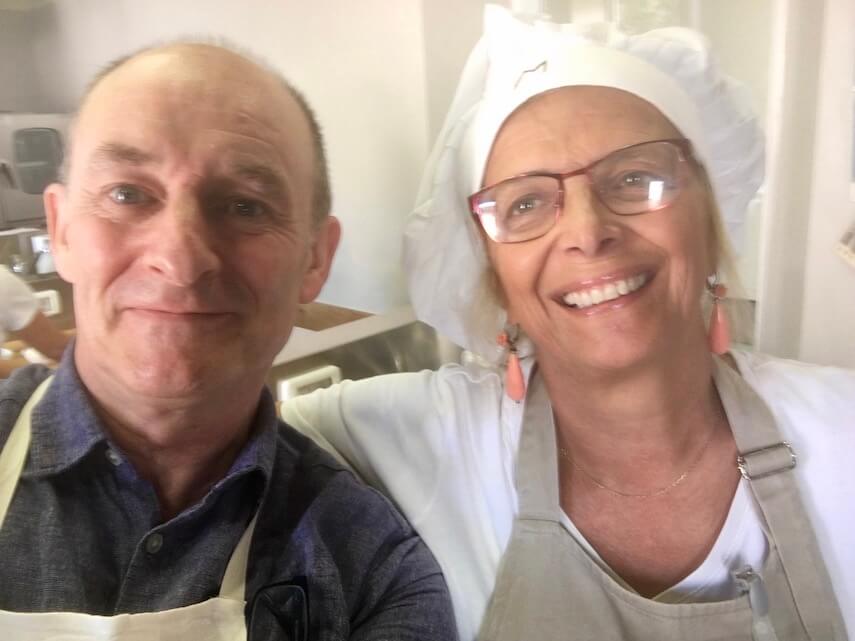 Roberta was lovely and made the whole process so much fun. Her expertise comes from the fact she cooks for her family every day and loves to help others.

As someone who only cooks pasta from a packet, I was surprised by just how easy the pasta making process is. Taking my place at my cooking station the ingredients before me were very simple, just flour, eggs and water. 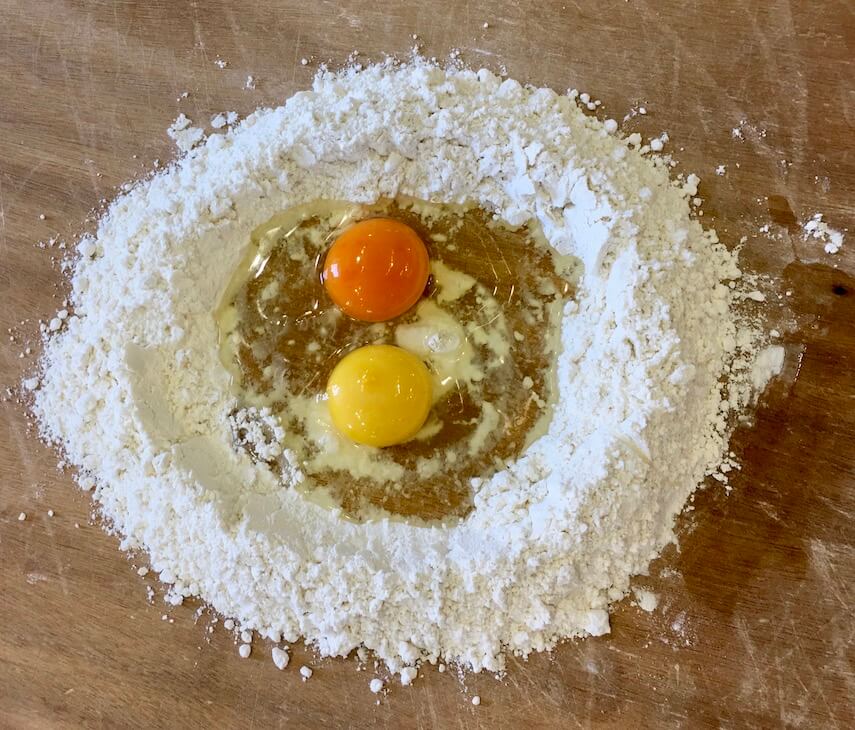 The flour was made into a hollowed-out volcano shape and the egg and water placed in the middle. I was intrigued to be given a very long rolling pin to roll out the pasta after mixing – it seems in this part of Italy size really does matters. 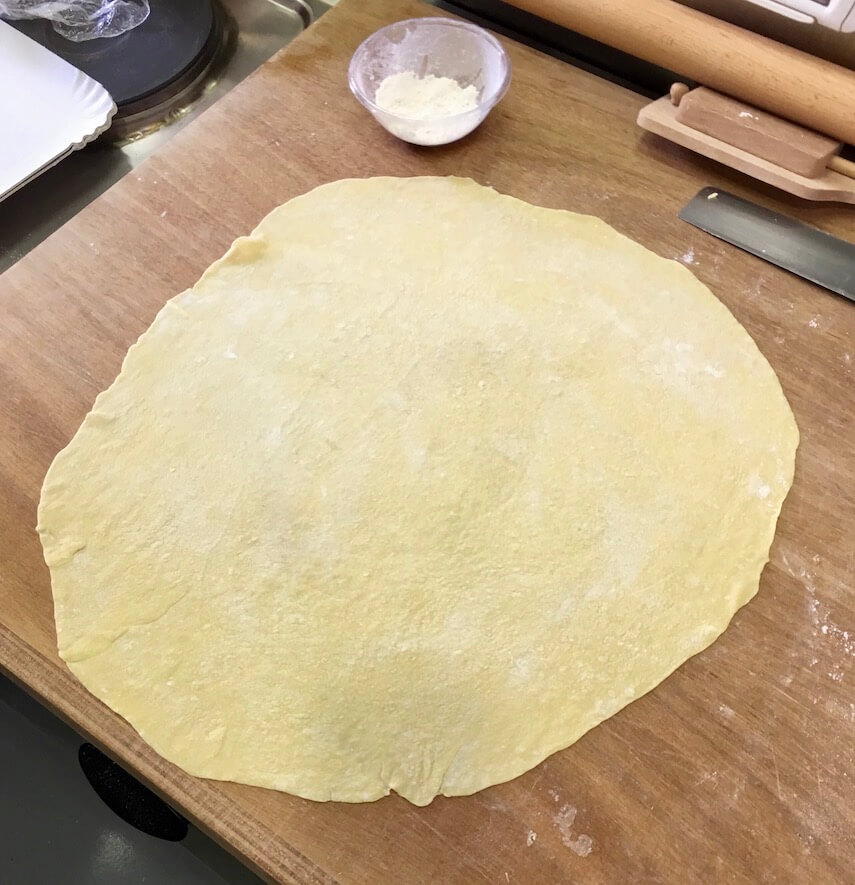 After creating the pasta we learned to slice and make tagliatelle and then pasta parcels, which were each filled with ricotta. My knowledge and skills were improving and frankly, I felt a great sense of accomplishment. I even have a certificate to prove it. 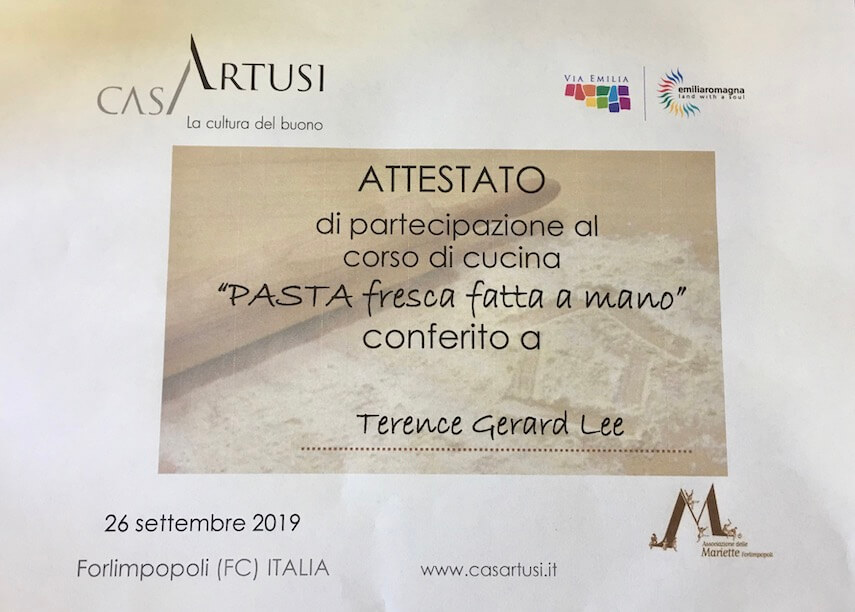 And it appeared that the efforts of my fellow classmates and I were not in vain – we were later able to dine on our handiwork for lunch – stuffed with ricotta and herbs and then enveloped in a light sauce with courgettes, shallots, herbs, and tomatoes. We also made tagliatelle which was served with a very traditional tomato sauce. 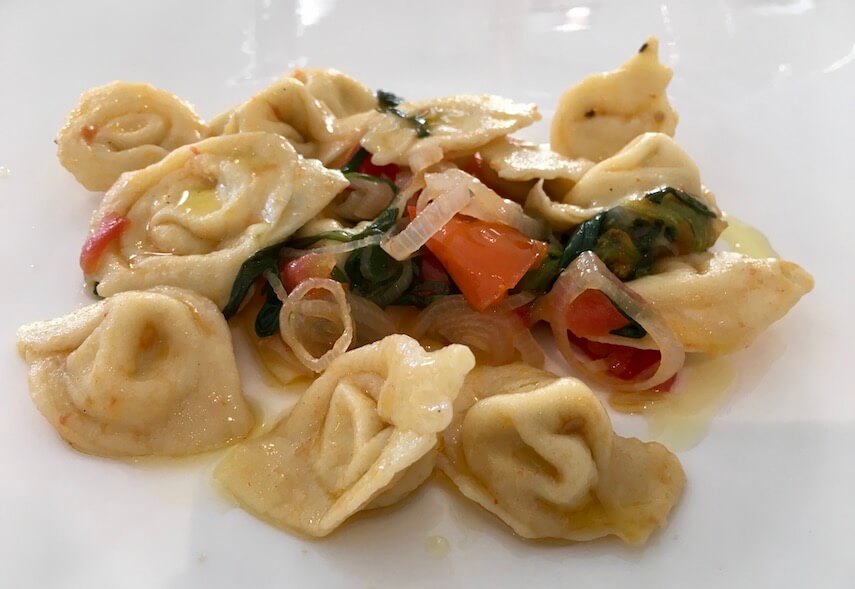 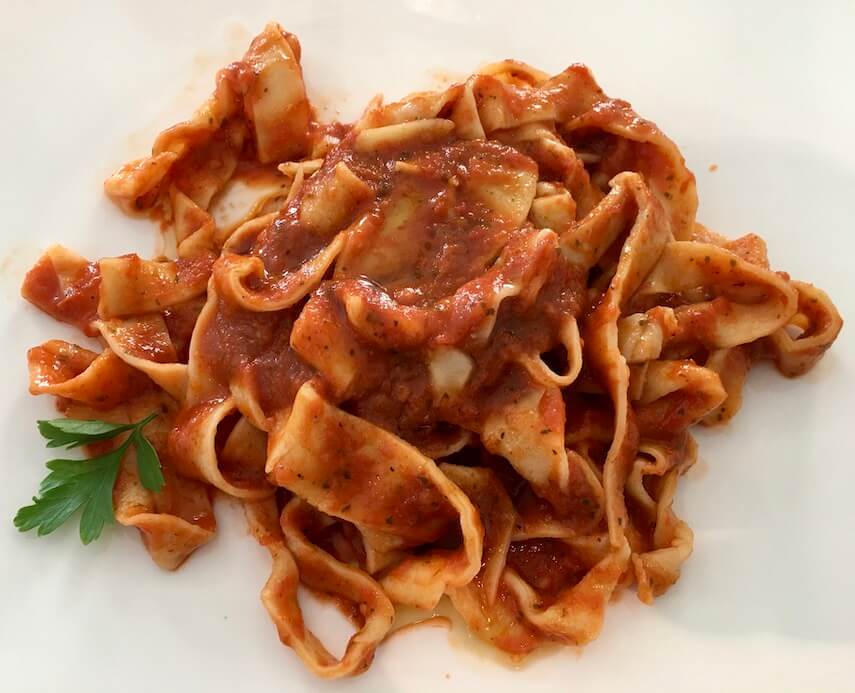 Plus we had an array of well-chosen and delicious wines and a dessert wine to accompany our meal.

After lunch, we strolled around the Pellegrino Artusi Library within the cooking school. It holds close to 50,000 books and a number of possessions of the great man himself, Pellegrino Artusi.

If food and particularly Italian food is your passion then a visit to the Casa Artusi will provide a taste of paradise in the heavenly homeland of great food. Satisfied with my efforts I continued my return journey to Rimini.

Walking through the past to Rimini’s future

Like a comfortable pair of slippers, I slipped back into the warm, welcoming embrace of Rimini.

Two years to the month after my last visit I was back and the welcome was a warm as the late Italian summer.

The beauty of its Adriatic coastline and glorious beaches thrill so many visitors. For me it was the historical locations that were as beguiling as I remembered; Rimini had won me over at hello.

Treading the ancient and cobbled streets of Rimini old town again was evocative. For thousands of years, these streets had bared witness to the chimes of change and even a world in conflict – 80% of Rimini old town was destroyed in the Second World War as allied forces attacked and defeated its German occupiers.

Since then Rimini recovered its panache and to become a coastal playground. But it has a long and fascinating history – it was founded by the Romans over 2,200 years ago, and has long been a centre of cultural and historical significance in the region of Emilia Romagna.

Many people visiting on a Rimini holiday are understandably drawn to the major landmarks such as the Arch of Augustus, the Tiberius Bridge and the unfinished cathedral, Malatesta Temple.

As on my first visit, I returned again to the magnificently restored Galli Theatre, it is a testament to the architectural glory of Rimini as well as a sign of confidence in the resilience of a proud people. 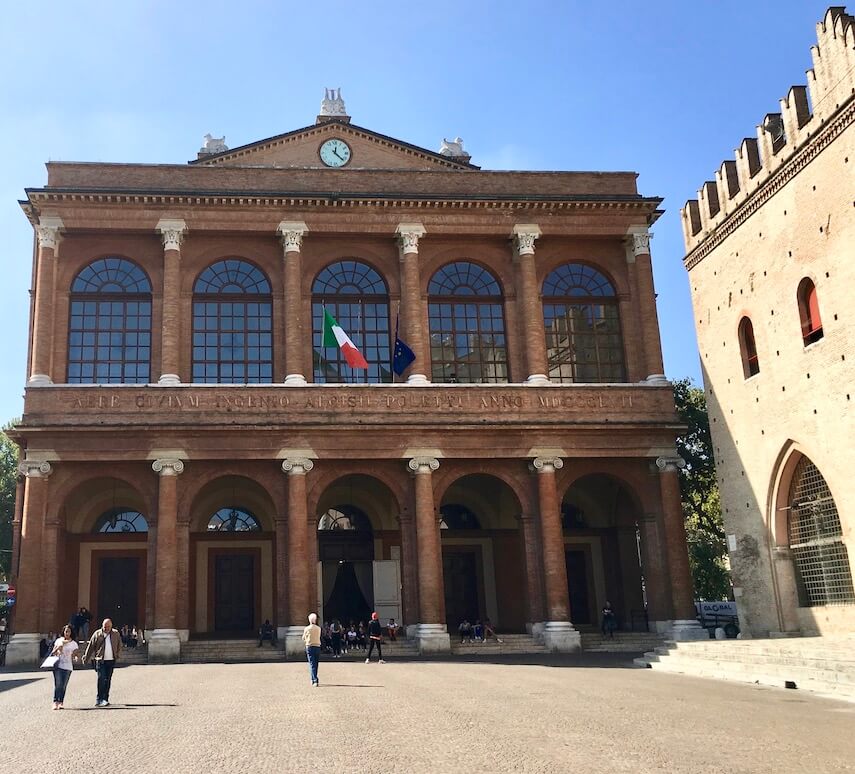 Bombed and all but destroyed in the spring of 1943, it had laid desolate until the decision was taken to restore it to its former glory. And as I discovered during my visit, they have succeeded gloriously. Seventy-five years after the wartime damage, the theatre once again raised the curtain to an excited audience. 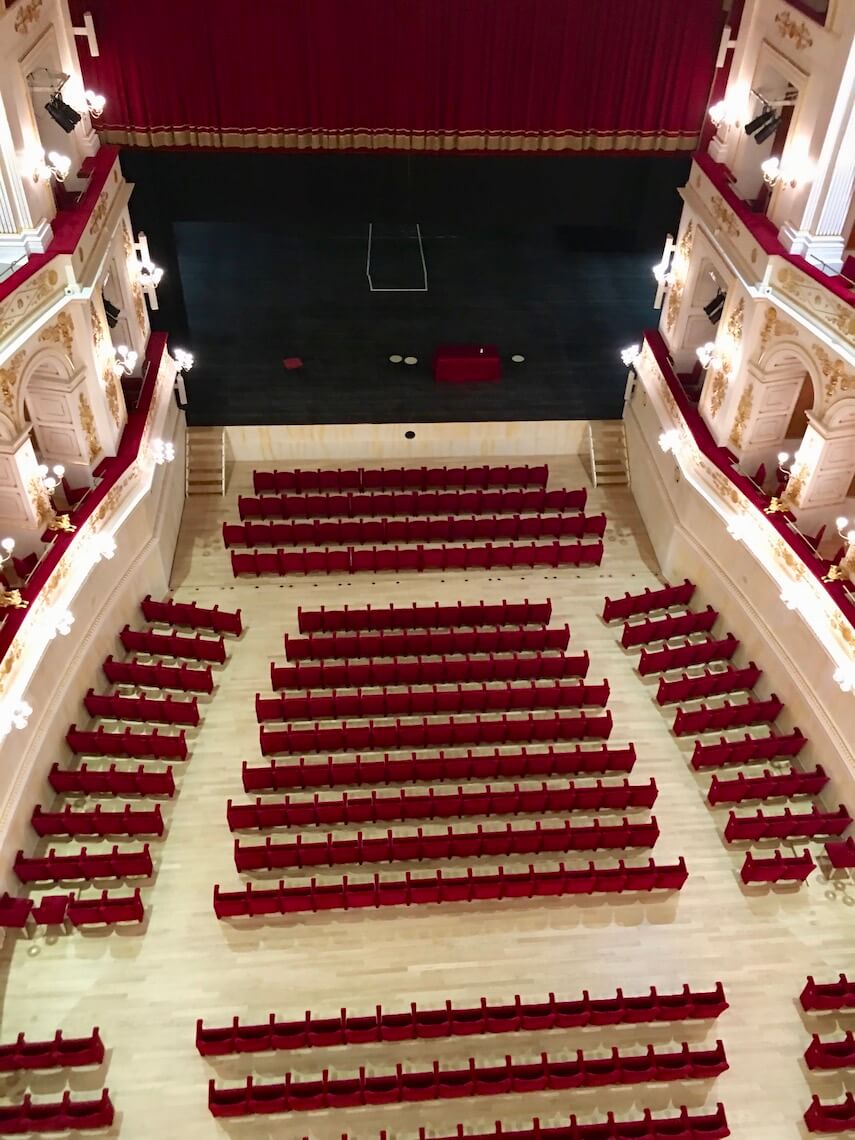 Whether you are a theatregoer or not the Galli is artistically and visually beautiful and so worthy of a visit. The deep red and flamboyant gold of the auditorium are seriously impactful.

Another sign of Rimini’s renaissance, yet another cultural and artistic restoration project opened since my last visit, when the town’s Fulgor Cinema was restored and opened again in 2018. 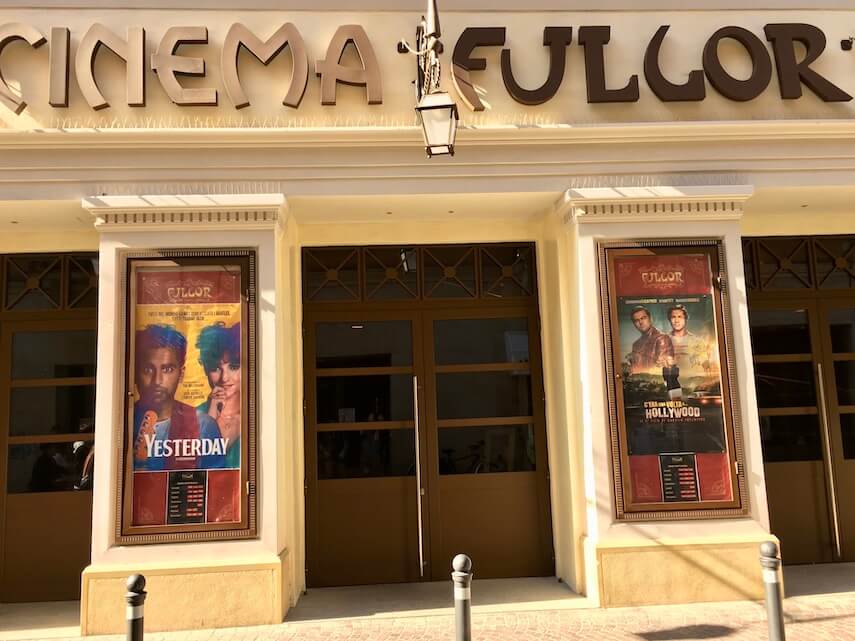 When I was last here two years ago the building was an empty shell with a great deal of restoration taking place. Today the Art Nouveau style of the Fulgor Cinema immediately took me back to a bygone age of style, elegance and nostalgia.

Renowned film director and screenwriter, Federico Fellini, was born in Rimini and it’s said that he watched his first and very formative films at the Fulgor Cinema. 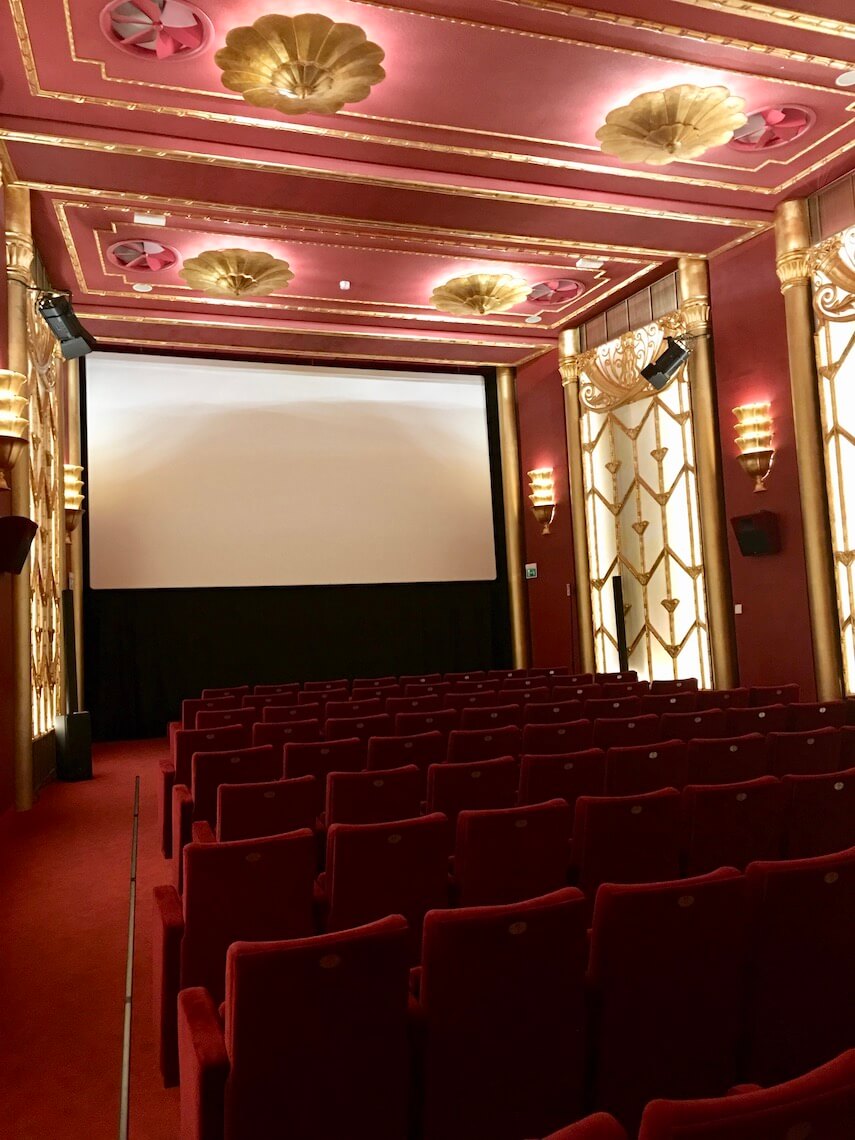 Fellini is widely recognized as one of the world’s greatest and most influential filmmakers. The Oscar-winning film director Martin Scorsese, has stated that he watches Fellini’s 1963 film 8½ every year. And the Fulgor Cinema intends to have a weekly showing of at least one Fellini film in tribute to the great man.

During my stroll around the town, I visited Rimini’s incomplete cathedral, the Malatesta Temple, that dates back to the 13th century. However, the cathedral’s facade is a relative newcomer only going back to the 15th century.

Again the Malatesta Temple was damaged during the bombing of the Second World War and needed a lot of restoration work. I toured the inside, which is quite interesting, however, I don’t think it is the most impressive cathedral I have visited.

But further enhancing Rimini’s renowned history is the charming neighbourhood of Borgo San Giuliano, which dates to the 11th century. I took an evening walk to view the local street art here. 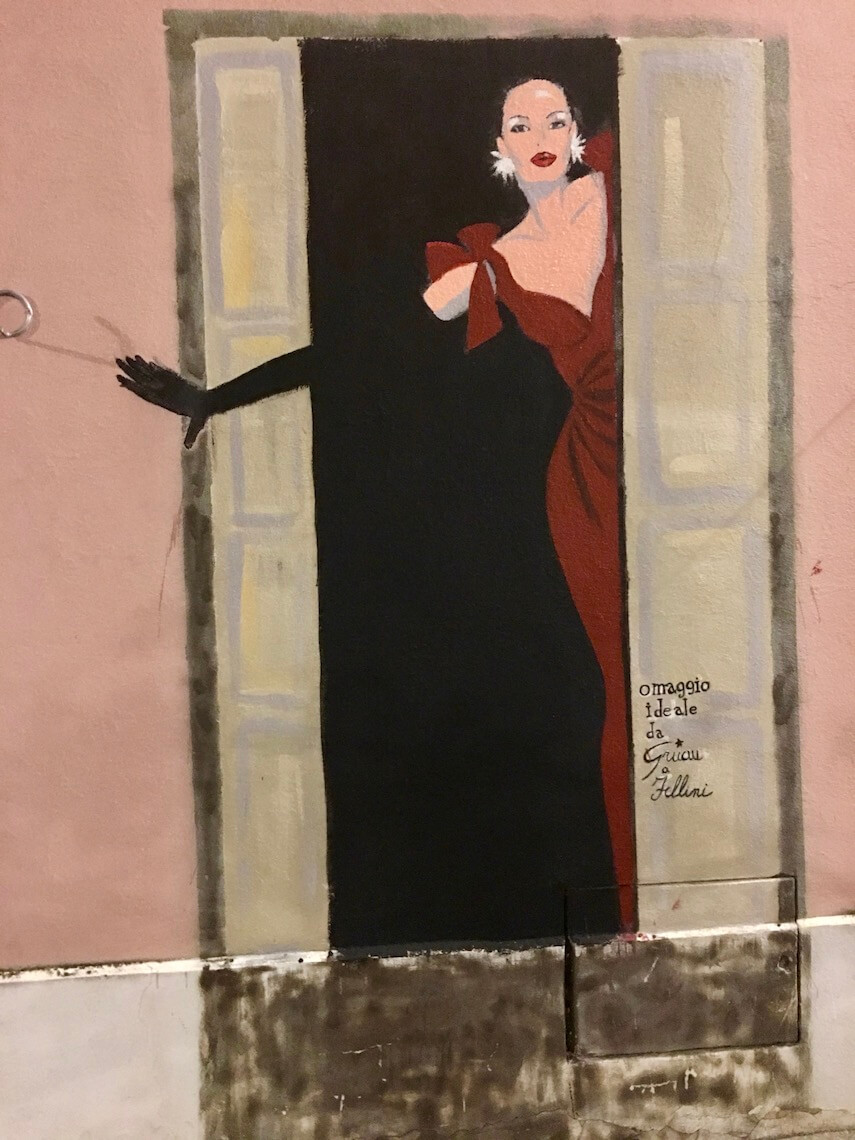 It is a glorious place to stroll and witness the quaint and colourful narrow streets and characterful small squares. Here the walls of the houses are decorated with murals depicting scenes from the films of Fellini. 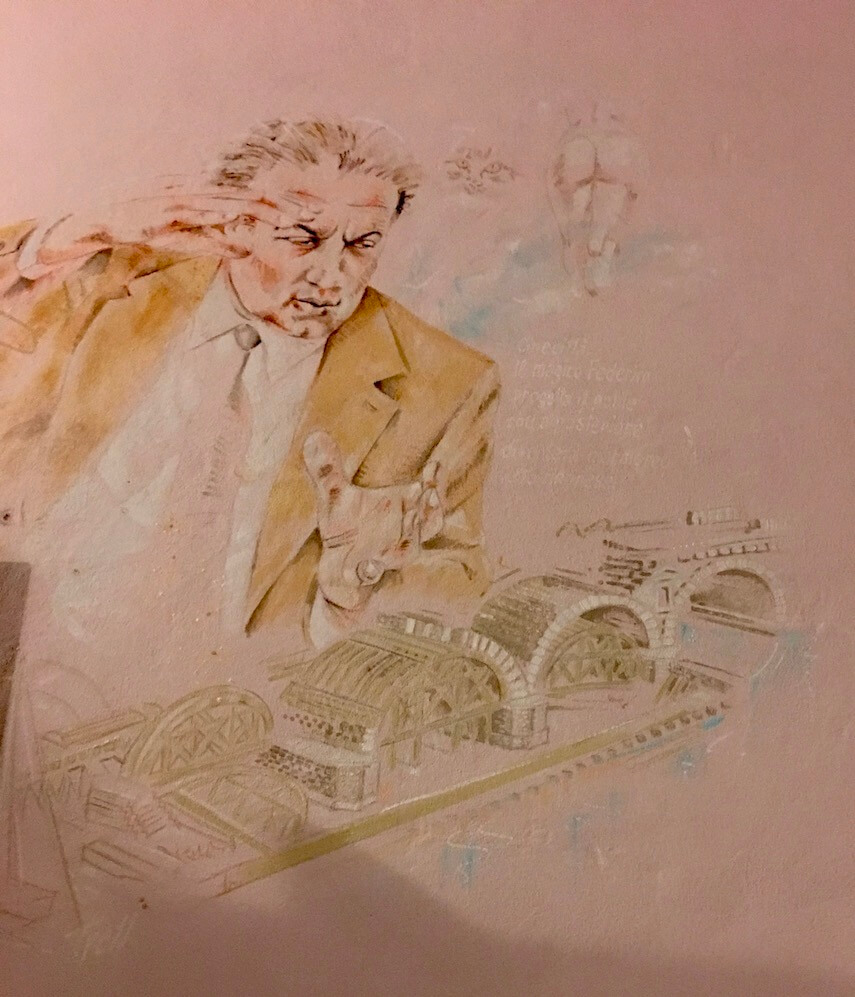 And this insightful artwork provides a peek into local history and cultural icons. Almost every corner I turned produced yet another pertinent image of past associations with the town. 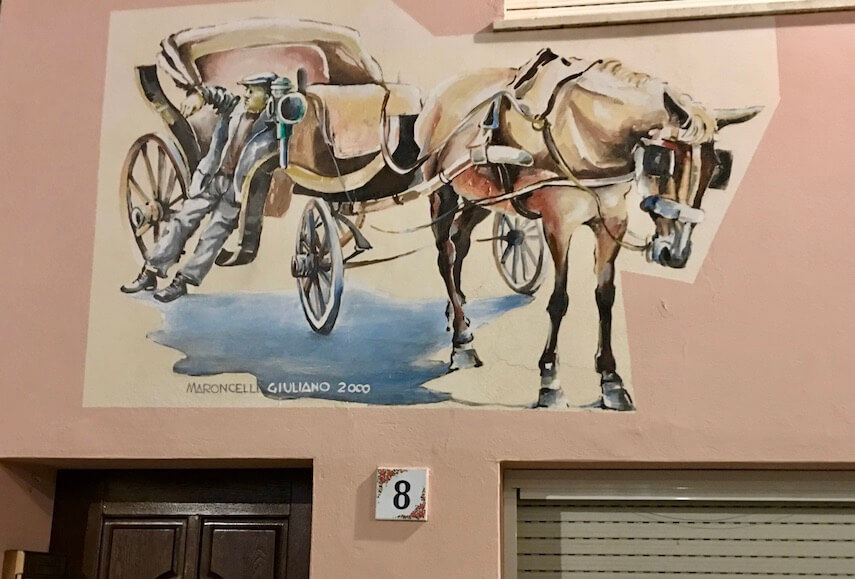 I felt through these murals that Rimini wears its history with pride and a little flamboyance.

Although I visited in the evening, it is clear that at any time of the day Borgo San Giuliano is a great place to get away from the hustle and bustle of Rimini’s city life.

However, there is far more to Rimini than its glorious history. For one, the food scene here is mesmerising and not to be missed – we are in Italy after all, and Rimini’s restaurant choices is worthy of the visit alone.

So, where to begin in a land that cherishes food, wine and great coffee, and treats meals not just as necessary sustenance, but an occasion? 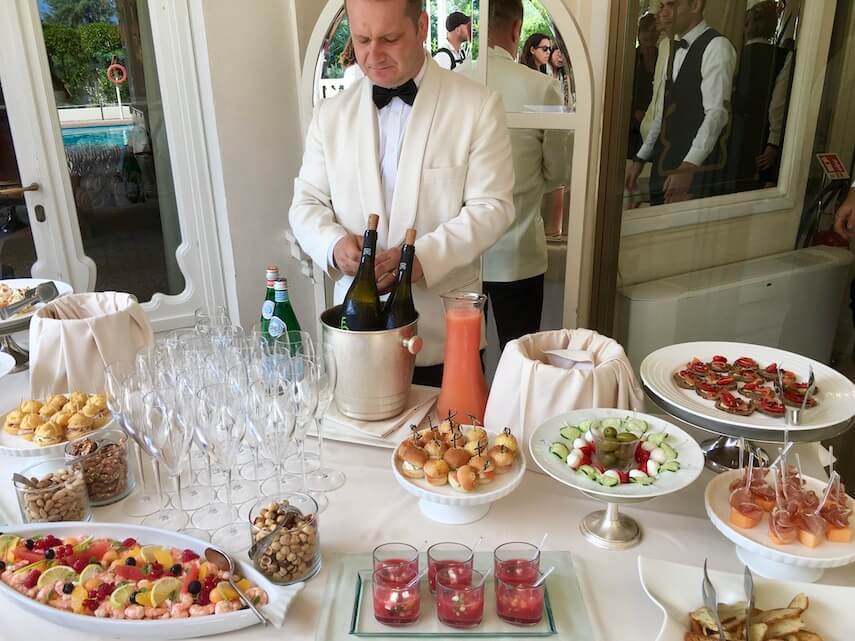 I dined at a number interesting and tasty places including on dining on a catamaran in Rimini harbour, at Trattoria La Marianna, which has been serving great food since the 1960s, and even on the terrace of the Grand Hotel, the only five-star hotel in Rimini. At each dining place, the Italian reputation for great food was unwaveringly upheld.

If you travel to sample the wonderful food of the Emilia Romagna region or to experience the culture, history or beaches, then a trip to Rimini will not disappoint.

Rimini is awash with hotels so finding somewhere to stay shouldn’t be a problem. But I enjoyed my stay at the design-focused Hotel Duomo. 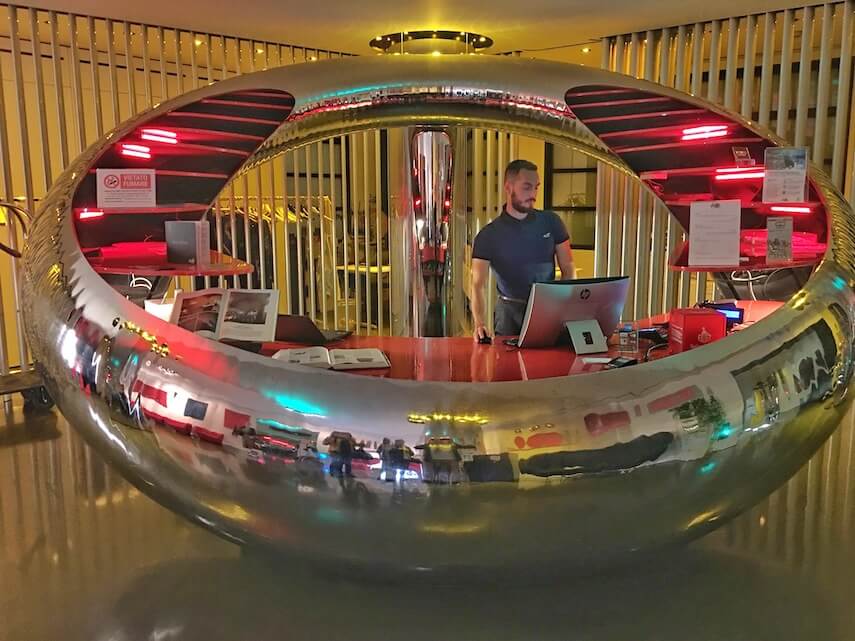 From the moment I saw the futuristic reception desk I knew Hotel Duomo was going to be good. It has 43 bedrooms, a nice dining area and bar and I loved it. It’s a quirky place to stay but the facilities are first-rate and my room was bright, colourful and very modern.

Map of the best places to visit on a Rimini holiday