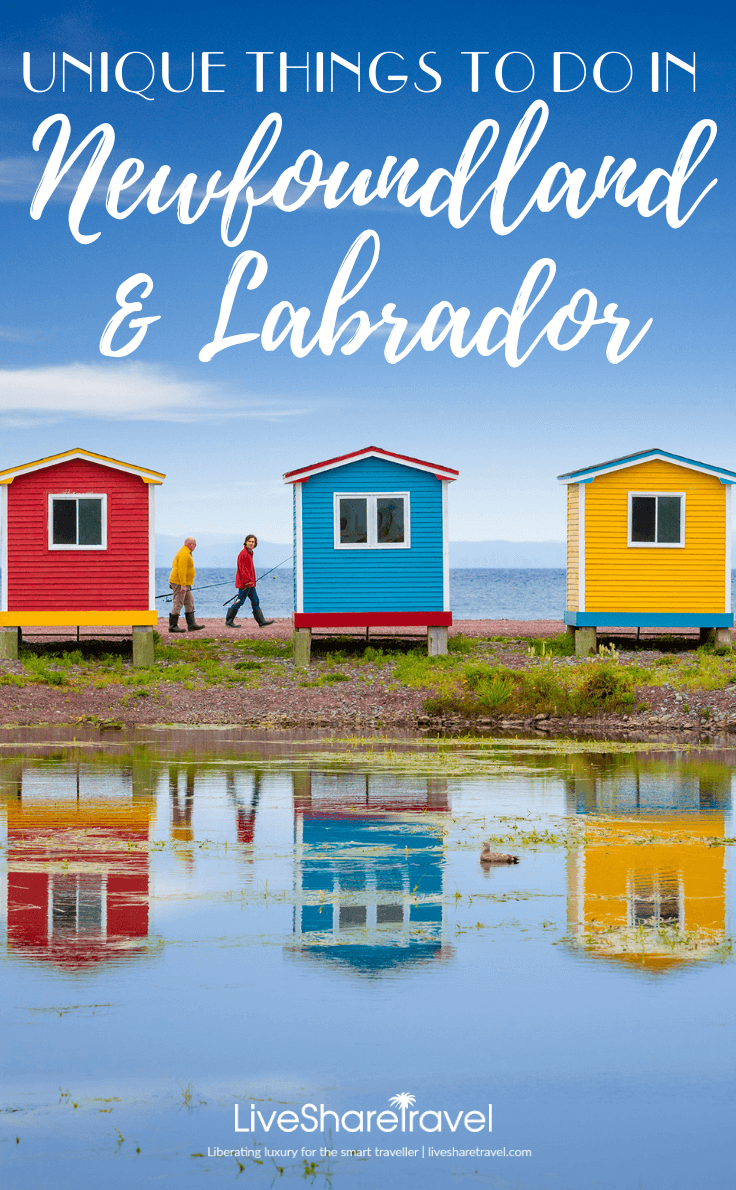 When people talk of paradise it’s often of white sand beaches where the sun warms your skin and the ocean air fills your lungs. But what if I told you that you could find paradise of a different kind in one of Canada’s lesser known provinces? Newfoundland & Labrador may not be the first province you think to visit in Canada, but it will reward you with incredible experiences, spectacular landscapes and a seriously warm welcome.

I wasn’t sure just what I would find when visiting Newfoundland & Labrador – it’s not somewhere that people often talk about, so it’s probably safe to say that the masses are unfamiliar with it. But that to me is definitely some of its appeal.

This travel guide to Newfoundland & Labrador is part of a project with Atlantic Canada Tourism. It is, however, a destination I’m delighted to share with you as I found it as fascinating as it was beautiful. There may be affiliate links in this post that provide us with a small revenue at no extra cost to you, so book with confidence and visit this incredible region of Canada. 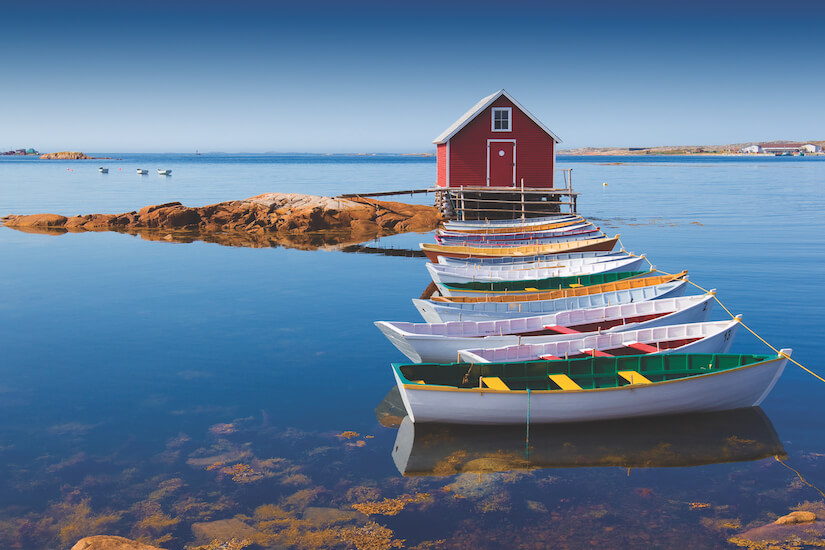 Why travel to Newfoundland & Labrador

For me, the first reason to travel to Newfoundland & Labrador is that it’s somewhat off the beaten track. Canada is not exactly an unusual country for UK travellers to head to, but few seem to make it beyond the big cities. But if you’re looking for a break from the norm, and a little adventure, it will definitely deliver.

It’s wonderful to discover somewhere a bit different, and Newfoundland & Labrador certainly has features that mark it out as unique. Each year it has visitors from pods of whales to massive icebergs that can float so close that locals can collect small pieces of iceberg ice from the shore to take home.

The seas off of the province see the world’s largest population of humpback whale in late spring and early summer, when you can see them during their migration. 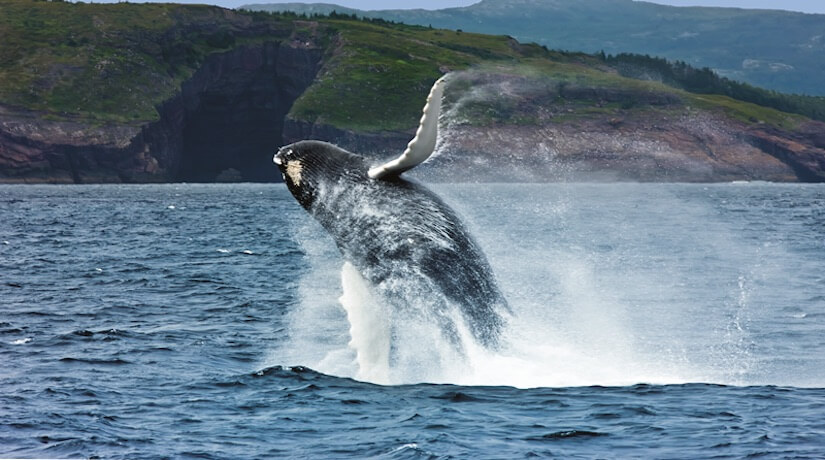 Then let’s talk about the locals because they for me, really did make my time there. Newfoundlanders are friendly beyond compare, and their charming accent (a mixture of Scottish, Irish, Canadian and I’m not sure what else that got lost across the Atlantic, delivered at 80mph) formed a rich chorus that added much colour to my visit. They also have a fascinating culture which they will happily share – from legendary tales, to ugly sticks (a homemade Newfoundland & Labrador instrument fashioned from broomsticks, bottle caps and tin cans) and unusual foods.

Newfoundland & Labrador also has a long and colourful history, while the capital, St. John’s overflows with a vibrant cultural scene, attracting musicians, artists, writers and dancers from Canada and across the globe.

But many are drawn to the east of Newfoundland for its natural beauty and great outdoors. There are plenty of challenging hiking routes with breathtaking scenery, national parks to explore, wildlife to spot and dramatic coastal views to soak up. 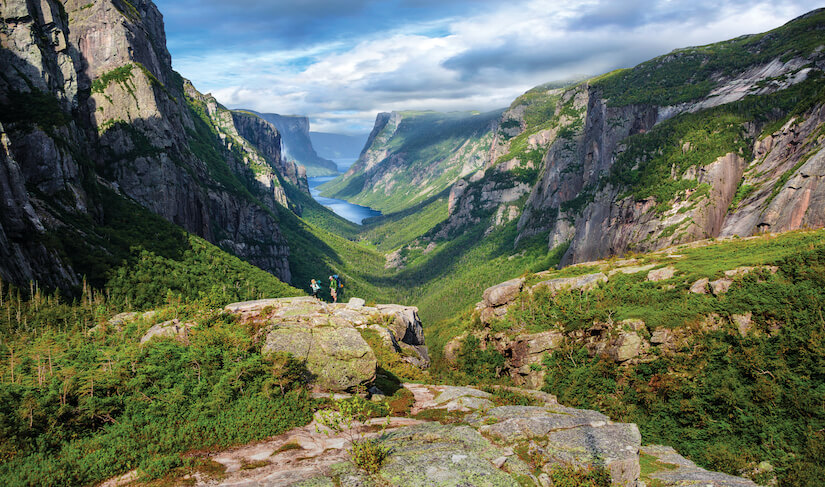 Our favourite things to do in Newfoundland & Labrador

Consider any great dramatic prose, and you still couldn’t conjure up the drama of delightful Twillingate. Even the drive there from Gander – the central Newfoundland & Labrador town made famous by the musical Come From Away – takes you through landscapes that are staggering in their beauty. Here wooded hillsides give way to broad expanses of water, the Atlantic Ocean seeping into every nook and cranny of this crocheted coast, Newfoundland & Labrador drawing the water in like a sponge. 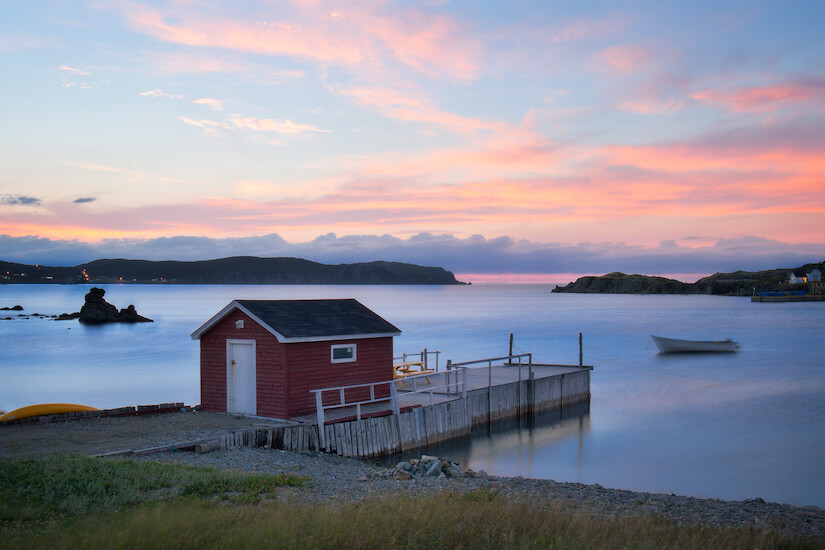 There’s a peace to this evocative landscape and it’s something I loved when I stayed in Twillingate, a quiet seaside town with a huge amount of character. Sitting on a bay perfectly sheltered from the ravages of the north Atlantic Ocean, it is a perfect base for many of the attractions of this part of Newfoundland & Labrador.

The coast here is great for hiking, you can take boat trips from the tiny harbour, head up to Long Point Lighthouse and soak up the views over Notre Dame Bay and just enjoy the quiet relaxation of the town for a few days of serious downtime. 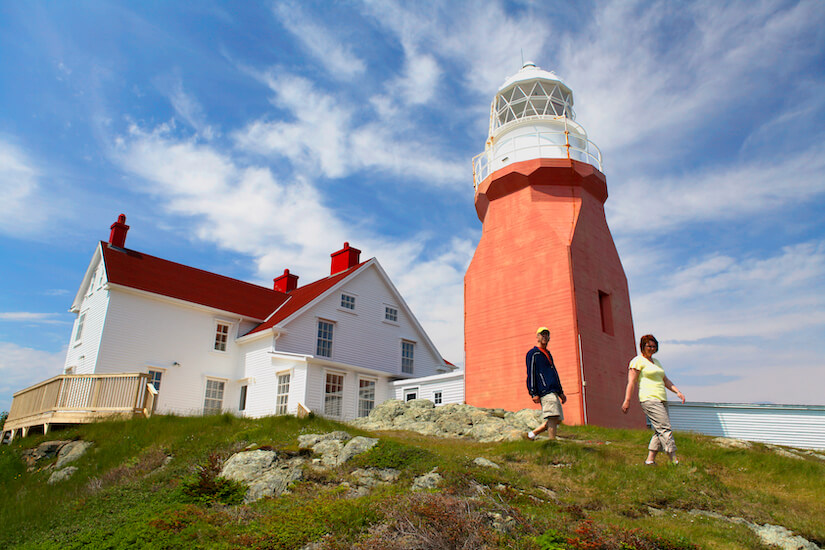 Chill out along Iceberg Alley

This has to be the Newfoundland & Labrador experience. The province’s location means that between April and August each year it plays host to icebergs, which have calved off of the glaciers of Greenland and Arctic Canada. These 10,000-year-old bergs – some, as large as an office block above water (but even larger below the surface, of course) gently sail into the Atlantic waters around and are remarkable to see. It’s one of those experiences that make you realise just how small you are in the cycle of the Earth, something I always find grounding and astonishing. 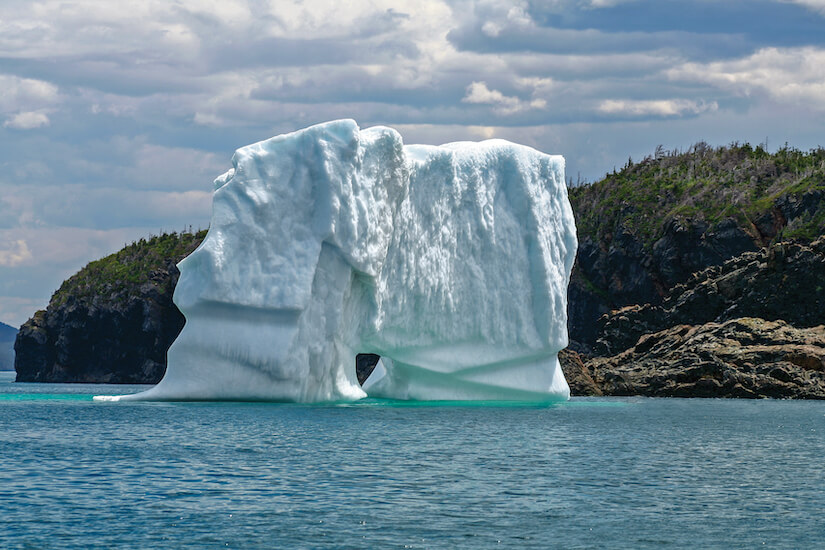 Here’s a video of one super sized iceberg floating through Iceberg Alley as the area is known – and you can also sample some of that local accent I mentioned.

You can view the bergs all along the eastern coast of Newfoundland & Labrador from the shore and also on boat tours, or even go out to them yourself in a kayak and view them from a safe distance (see details of this on the Iceberg Finder site below).

Some of the most popular places to spot them are St Lewis, Battle Harbour, Red Bay, Point Amour, St Anthony, La Scie, Twillingate, Fogo Island, Change Islands, Bonavista, St. John’s and Cape Spear, and Bay Bulls and Witless Bay. Plan your trip on Iceberg Finder, a site that details tours and how to view icebergs, as well as how to do so safely.

Get close to nature

Newfoundland & Labrador is blessed with an abundance of wildlife, the highlight of which is likely seeing whales out at sea. The waters there see all manner of species of whales – from humpbacks to blue and sperm whales to orcas, and even dolphins.

The whales often put on a spectacular display for the visiting boats, swimming gracefully nearby. You can also view travelling pods from the land, while enjoying hikes along the coast.

The province is also home to a great variety of mammals from moose to foxes and bird life. You can even take a whale watching tour that also takes in North America’s largest puffin colony. 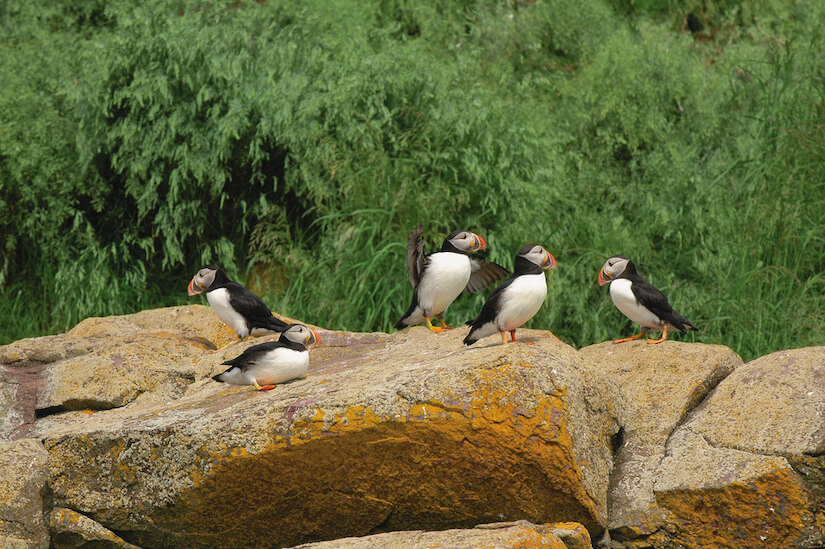 Nurture the soul and venture around on foot to truly experience its rugged landscape. There are a huge number of hiking trails across the province through national parks and along kilometres of coastal paths. Most are easy to moderate. 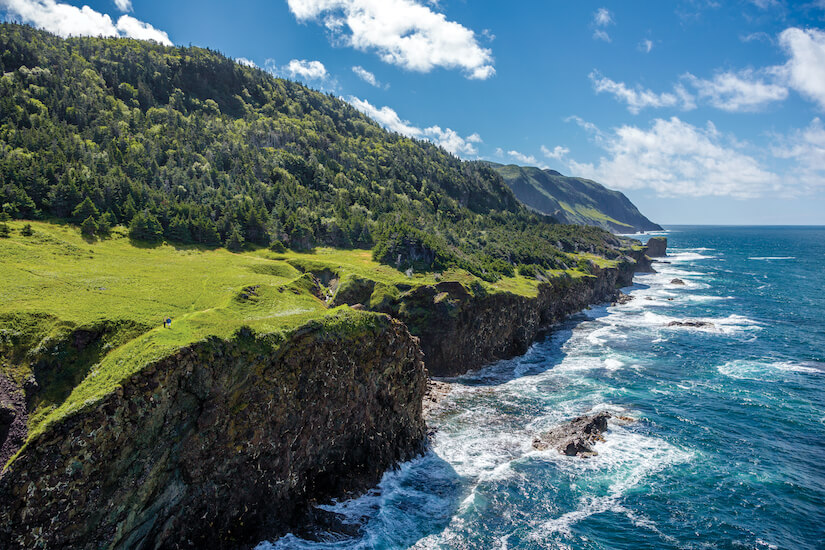 Some that stand out are the East Coast Trail, which takes in 300 kilometres of trails through coastal villages. Then there’s the trails through Gros Morne National Park, such as the Green Gardens, which starts on the barren landscape of the Tablelands, then heads through boreal forest to the coast where sea stacks grace the beaches. The other trail of note there is the Burnt Hill Trail, a short, easy hike loop of the hill with several picnic areas and plenty of Instagrammable spots. 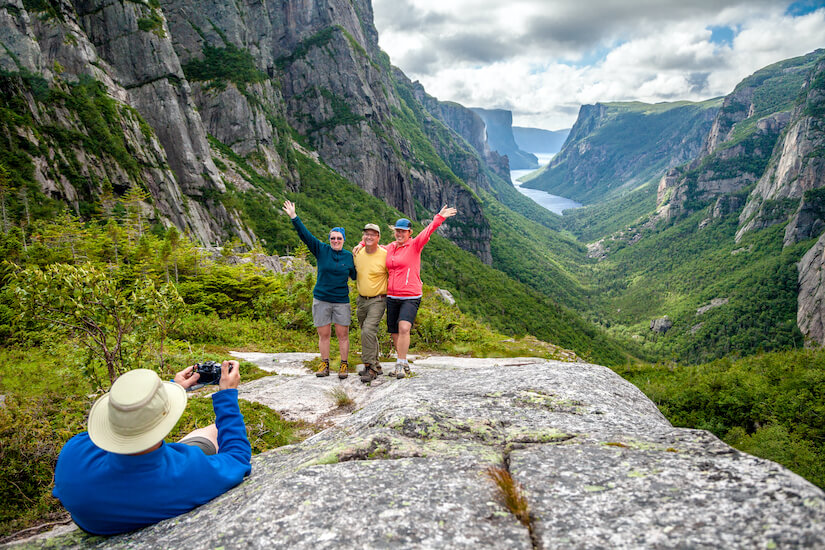 Also visit Gros Morne National Park in late May for the Trails, Tales and Tunes Festival, combining dramatic views with art exhibits, concerts and child-friendly activities staged around the waterfront.

Though the province’s rugged terrain and mild weather means it isn’t blessed with the best conditions for growing crops, it has plenty of tasty options for foodies.

Fresh seafood is as tasty as it is abundant there with everything from the ubiquitous cod, to squid, lobster, oysters and mussels, but there are also a number of popular local dishes that should not be missed. 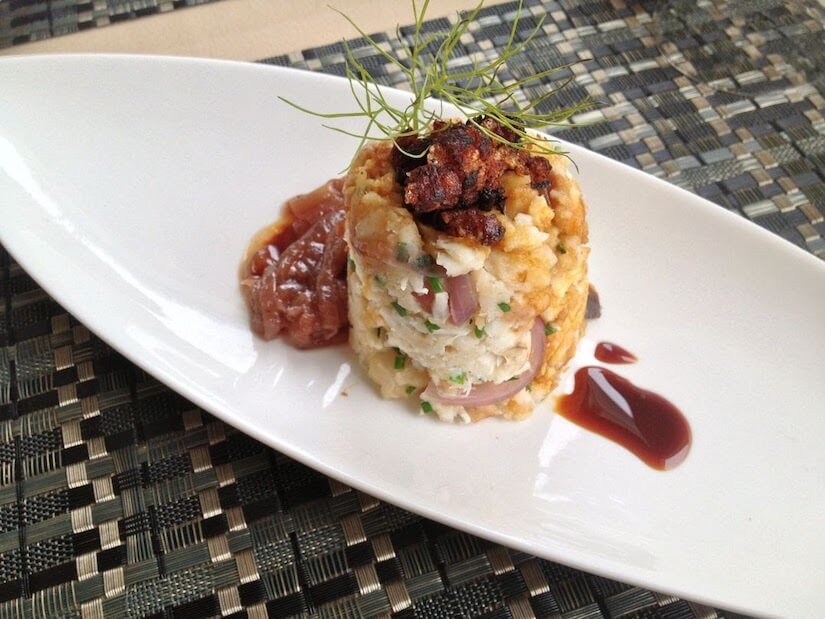 Some are distinctly Newfoundlander like Fisherman’s Brewis – a dish made famous by local fishermen, and cod tongues – yes, actual tongues of Atlantic cod, which come fat and thin giving a different texture depending on their size and are fried in batter till crispy. I learned to cook them at The Anchor Inn, in Twillingate, and they were surprisingly good.

One of the few crops that thrive in Newfoundland & Labrador’s harsh winters are root vegetables and you can even tour root cellars, where vegetables were traditionally stored over the winter. Stop in at The Anchor Inn, and you can also sample a delicious root vegetable salad at Georgie’s Restaurant.

What to drink in Newfoundland & Labrador

The Anchor also offered me the chance to experience a Newfoundland ritual. It is here I was ‘Screeched In’. Newfoundland & Labrador produces its own rum, Screech, and across the area it’s traditional to drink a shot of rum, recite a poem and kiss a cod. Yes, really – you need to kiss a cod – fresh or frozen, the choice is yours. But that is how you become a Newfoundlander, for a moment at least.

You can find further unusual drinks at Auk Island Winery in Twillingate. Newfoundland & Labrador’s rugged landscape offers perfect growing conditions for berries, such as the hard to find cloudberry, blueberries, raspberries and partridgeberries, and these delicate fruits have been crafted into an intoxicating range of berry wines, wine jelly (think of a boozy cranberry sauce) and even ice cream. 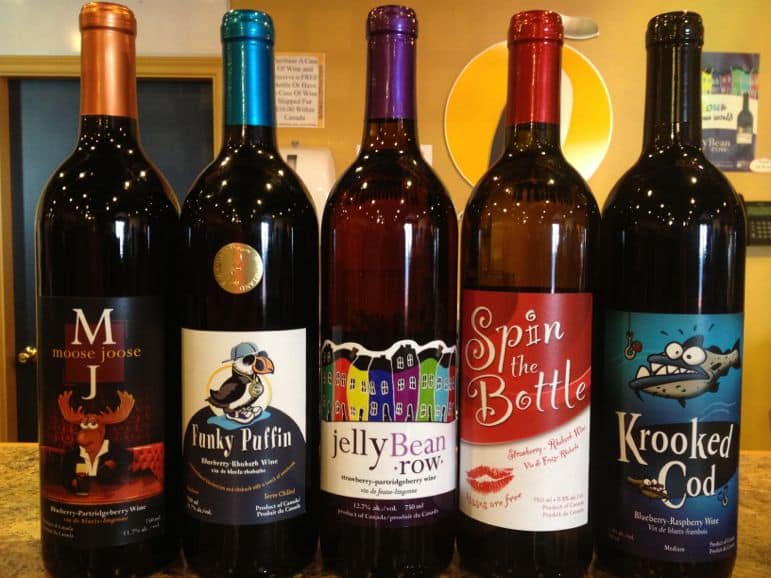 But for me, one of the biggest Newfoundland & Labrador treats is anything that can be made with iceberg ice. Before the bergs bob on their way down before melting in the warmer waters south of Canada, locals chip off chunks of ice to put in drinks at home. As the iceberg ice hits your drink thousands of bubbles of compacted air crackle and pop, adding a natural fizz. 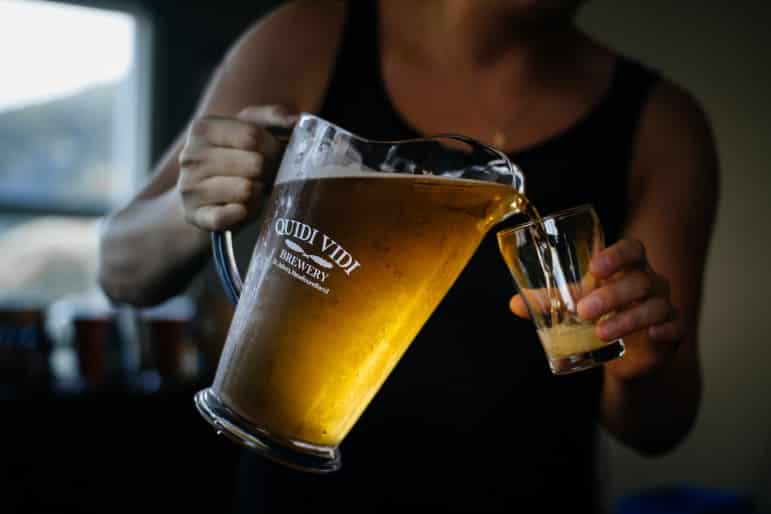 Auk Island Winery make a cool Iceberg Berry Wine from iceberg water, and Quidi Vidi Brewery refines it into the crispest beer I’ve ever had. Why does it taste so good? Iceberg water has been frozen in time for at least 25,000 years and as it has been in the Arctic, it hasn’t been exposed to the pollution of the rest of the world. It’s just another unique part of life in this incredible corner of the world.

Where to stay in Newfoundland & Labrador

From colourful bed and breakfasts to sleek boutique stays, Newfoundland & Labrador has accommodation to suit every travel whim.

Fogo Island Inn is an exclusive island hideaway. An impressive feat of architecture, the mesmerising sea views offer some peace and serenity. 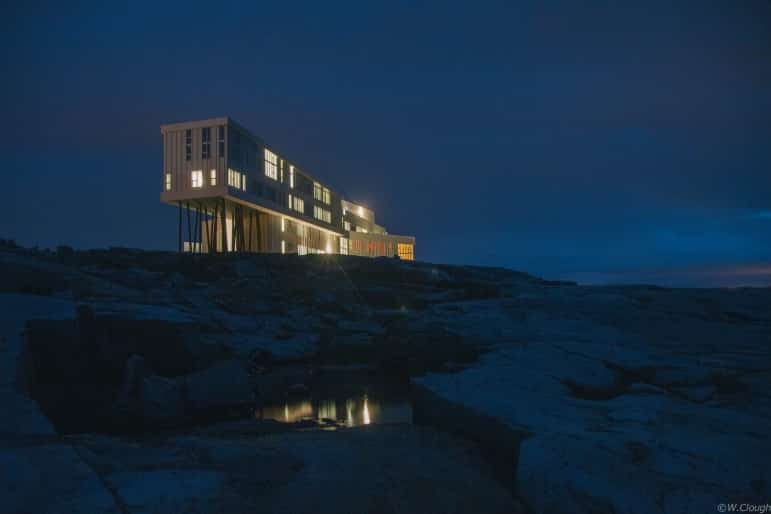 Contemporary, yet altogether traditional, the inn sits on stilts over the coastline with floor to ceiling views of the ocean. Meanwhile the sauna, hot tub, cinema and reading room provide some very good reasons to spend a day chilling out around the hotel.

The JAG is a boutique hotel that puts you right at the heart of St. John’s cultural scene, with musical references throughout. It even has its own radio station!

Paradise B&B in Twillingate has one of the most astounding Atlantic Ocean views and is run by a lovely couple making your stay a homely, real taste of Newfoundland & Labrador life.

How to get to Newfoundland & Labrador

Air Canada is the leading airline offering flights, from approximately £450 per person, with a flight time of six hours non-stop from London. 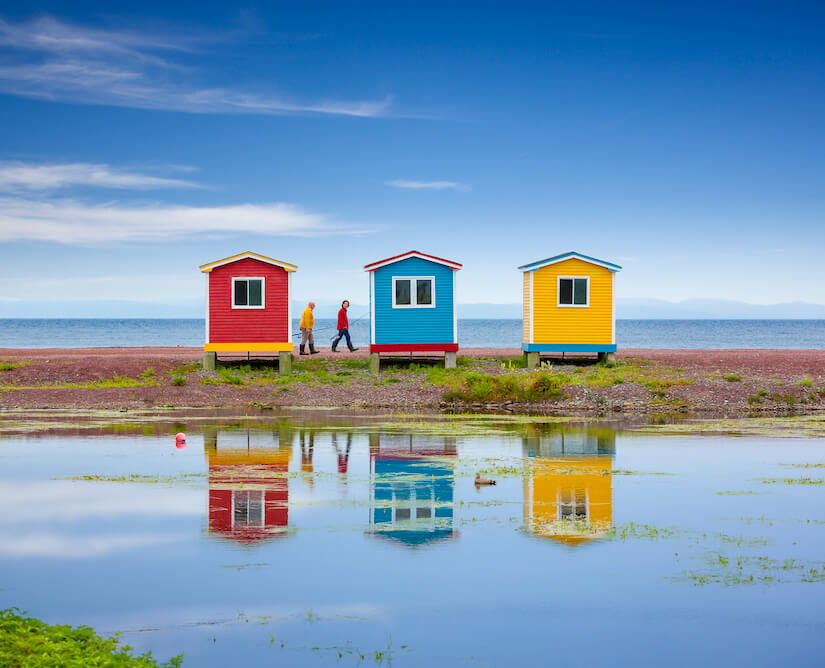 Search for flights to Newfoundland & Labrador