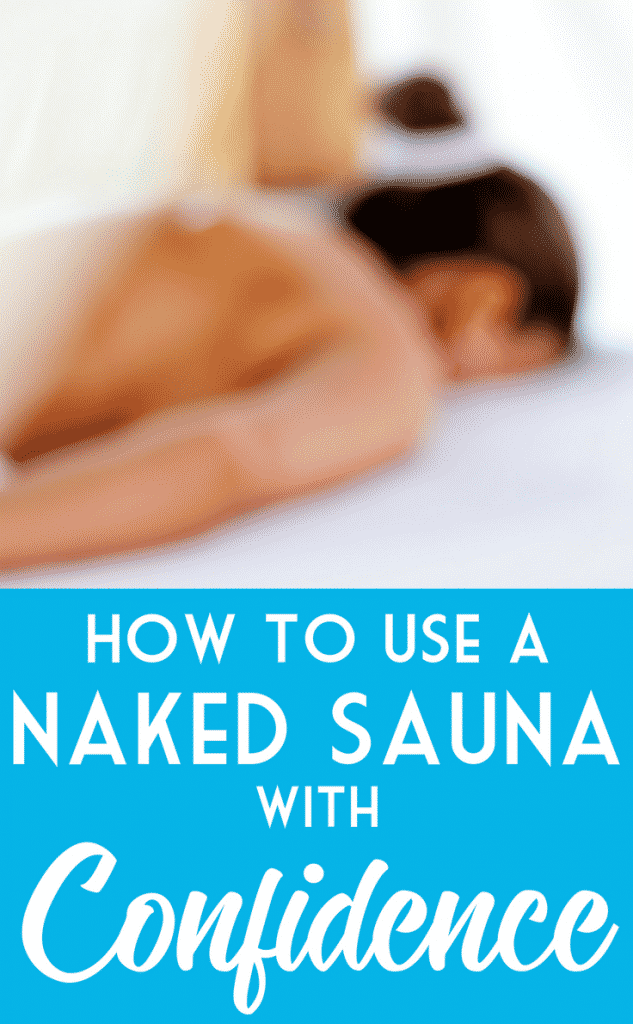 A naked sauna or, to put a finer point on it, a mixed gender nude sauna is as Austrian as schnitzel, striking mountains and glacier lakes and wonderful hiking – but are we all ready to strip off?

It was on one of my early visits to the country’s Tirol region that I discovered this aspect of Austrian life and realised I knew nothing about their spa mentality. Or that spas in Austria are pretty much all whip-all-your-clothes-off naturist spas.

You may not be ready to reveal all and join the people of all ages, shapes and sizes in the spa just yet, but hopefully, after reading of our experience you’ll feel a little more relaxed. I also have a number of tips and do’s and don’ts below to help you go bare in the spa with confidence.

It was while Sarah and I were in the town of Alpbach that we visited the sauna at our traditional Alpine hotel, the Romantik Hotel Boeglerhof, and I was surprised to see a ‘no bathing costumes allowed’ sign. The spa had mixed sex nudist saunas and as people went between them and the different steam rooms there was a lot of naked flesh around. I only saw two people wearing costumes and they actually stood out as a bit of an oddity.

For my part, I take quite a liberal view of social norms and conventions, so I was content to remove my clothes and go with the flow. Even as a first time naturist I didn’t feel too uncomfortable. However, as I sat among my fellow naked sauna users, I started to think about social norms in different countries and wondered if people visiting from different corners of the world would be comfortable going au naturel.

Why go bare at the spa?

It’s usual to wear swimming costumes at the spa in the UK of course, and in all other countries I’d visited up to then (although Germany and, as I was later to discover, Netherlands also have a nudist sauna culture). So what was it about Austrians, which differed from many of their fellow Europeans? 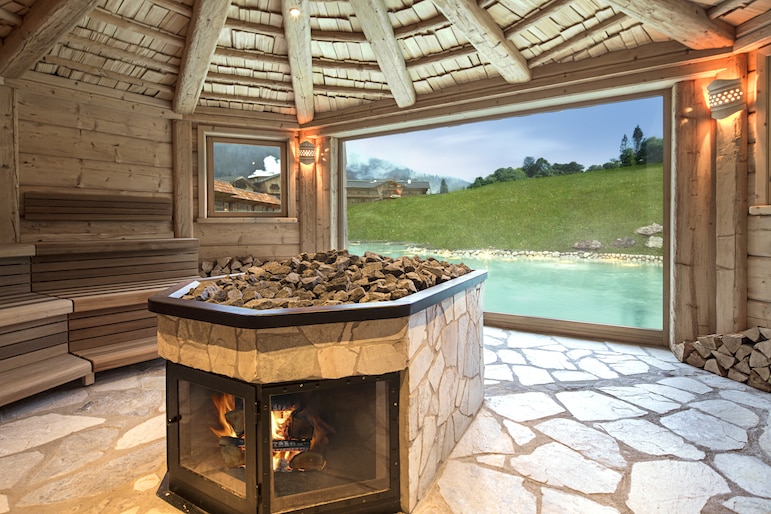 Over the next few days, I stayed in a number of hotels and as I love to let off steam in the sauna, I also went to a lot of the saunas and spoke with fellow bathers. How come Austrians were so relaxed about nudity at the spa? Were other nationalities equally unperturbed? According to a succession of Austrians I spoke to using the spa in this way was simply a way of life and completely natural. For them, it was nothing out of the ordinary, but for some visitors stripping off with the locals is a step too far.

One Italian tourist thought it was “wrong to display the naked body”. I asked gently, trying to better understand her thought processes: “Is there virtue in body modesty?”

“It’s probably because of what we’re taught,” she said. “But I’d find it impossible to show myself like that.” 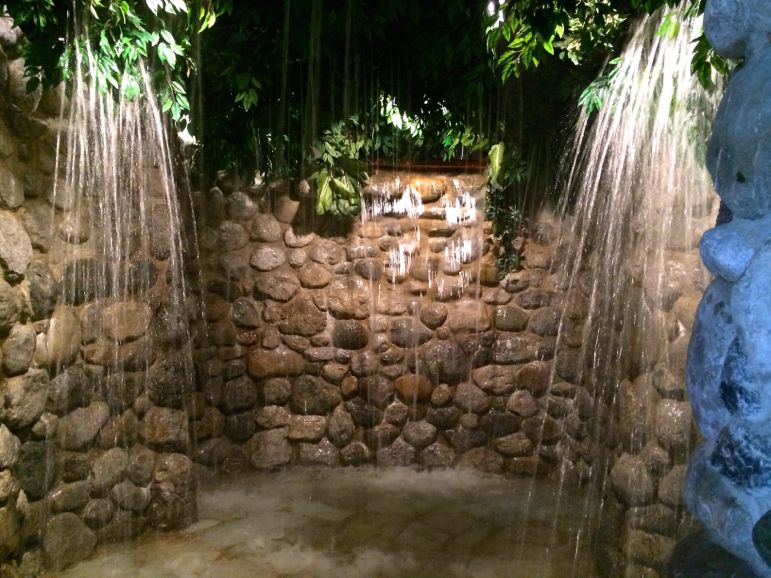 Yet by no means did everyone I meet have difficulty with Austria’s mixed gender nude sauna culture. One first time naturist, a Swedish ski instructor we spoke with, said her first Austrian sauna experience was a bit of a surprise but after a couple of visits it became very natural and she felt at ease. A local couple said when people visit the sauna there for the first time they tend to look at other users, but after the second or third visit that stops and it becomes a very normal experience.

In Austrian spas I found there were mature naturists and young naturists – aged from 18 to 88, each at ease in their surroundings. I must say I found it a very relaxed environment, where no one stared at fellow users, and easy conversations took place in what is a surprisingly social setting. 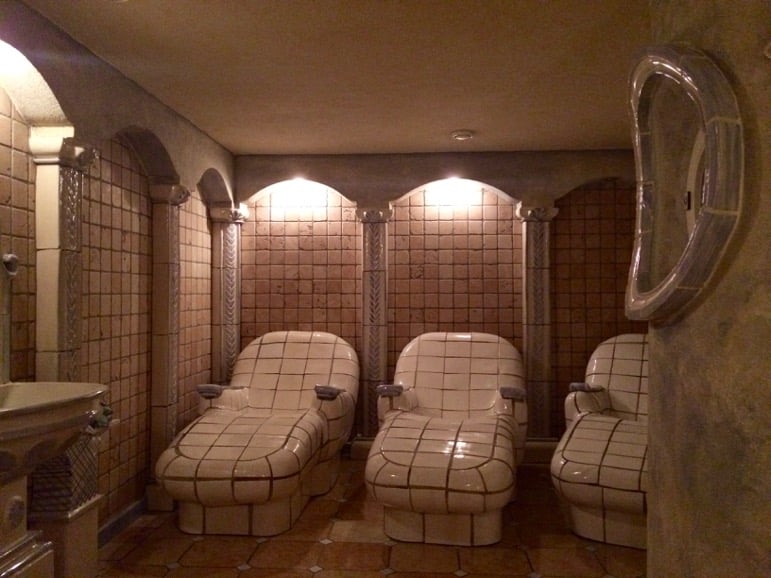 Interestingly for us, the spa hotels we stayed at meant that you would also see the people you shared the spa with over breakfast or at the bar in the evenings. Once again there was no awkwardness or any inappropriate references to our sauna experiences. It was just mature responsible people going about their normal business and holding sociable conversations with fellow hotel guests.

One experience Sarah and I had which we thought was very positive was meeting a very elderly lady at dinner one evening. We assumed her to be about 80-years-old. She clearly took a liking to us and waved and smiled each time our eyes met. The next day we met up with her in the spa and it was only after seeing her a few times that I noticed she’d had a double mastectomy. No one took any notice of the obvious scarring and equally importantly she was relaxed in that naked environment. I took this as a very positive sign. There is no need to feel body conscious nor to cover up if you have what could be perceived as bodily imperfections.

Why use a naked sauna? 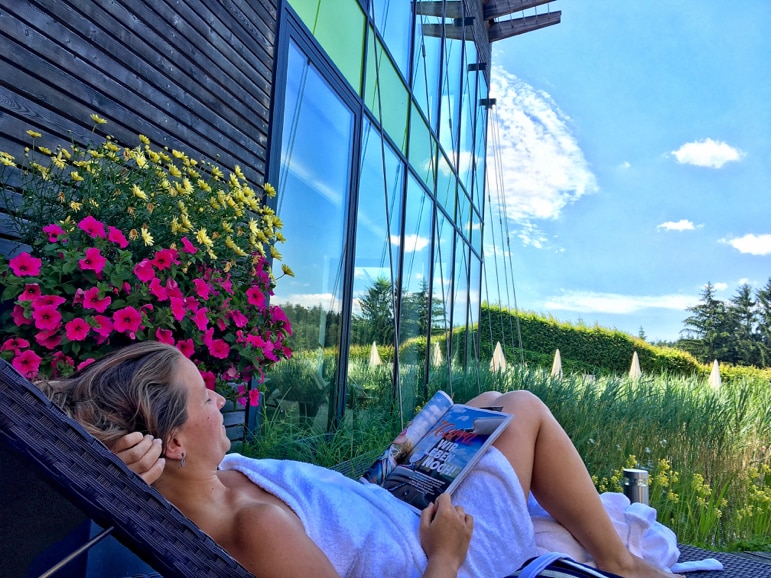 So what are the arguments in favour of mixed gender nude saunas? For me, and obviously a whole nation of Austrians, they are an improvement on clothed spas because:

Here are a few tips if you are new to Austrian saunas – naked or not. First of all, if you are a little bashful fear not! Many spas have “textile” areas or sections of the spa where you can wear your swimwear. These are usually much smaller. Tauern Spa, for example, has one textile sauna and steam room out of 12.

Here are some other things to do: 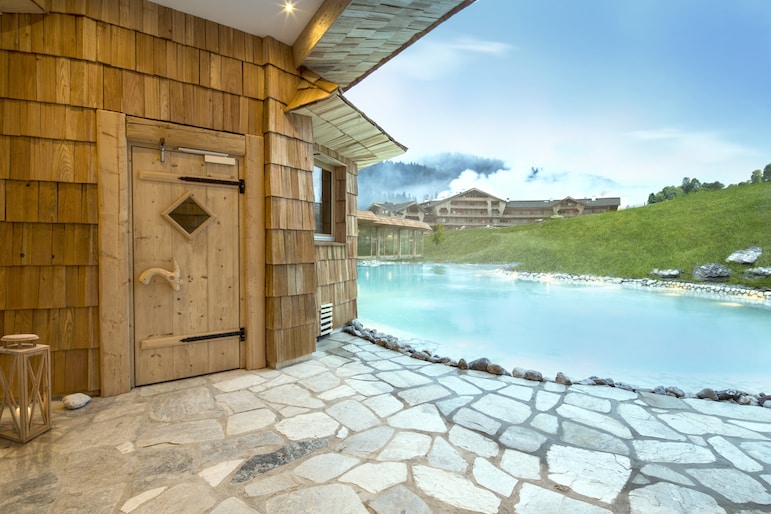 Our favourite spas in Austria

So where should you go to the spa in Austria? Hotels are a great place to start, as most luxury hotels have spas and many are expansive. In the past few years we have visited a wide array of them – here are a few of our favourites:

Tauern Spa, in Kaprun, near Zell-am-See has great views out over the countryside, the mountains and of the Kitzsteinhorn glacier. The hotel itself has an indoor-outdoor pool, plus a steam room and two saunas – one known as the Eagle Nest – facing onto the glacier. But it doesn’t end there – the hotel is also connected to a huge public spa with 12 saunas and steam rooms, and multiple swimming pools. It’s enough to keep every member of the family happy. 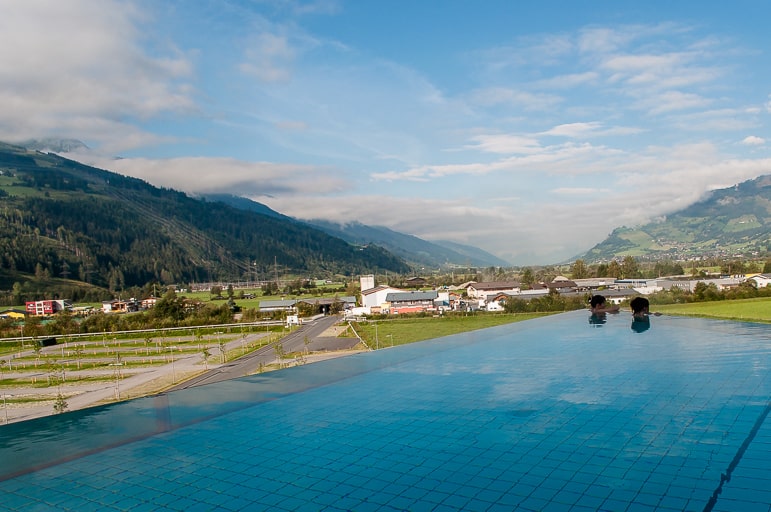 Owned by the same hotel group as the Tauern Spa, the Aqua Dome in the Ötztal Valley, Tirol is surrounded by a relaxing alpine landscape of mountains and meadows. It has the two spas, the SPA3000 area, which is solely for hotel guests and a public area with unusual saunas such as one with hay and another with an oven at its heart. 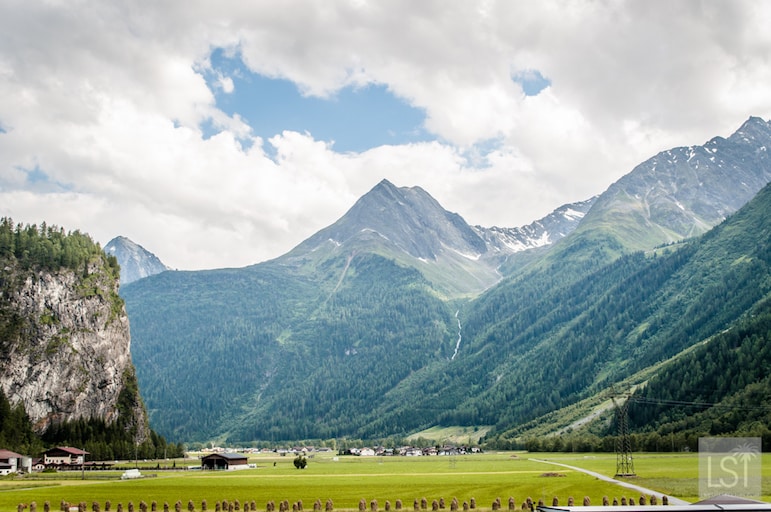 The Stanglwirt hotel has fabulous spa facilities in two distinct areas, one for clothed spa-goers and another nude. Their wellness section provides some of the best treatments we’ve ever had. I had a Shanti peeling and relaxing massage and Sarah revelled in a butterfly facial with diamond microdermabrasion. 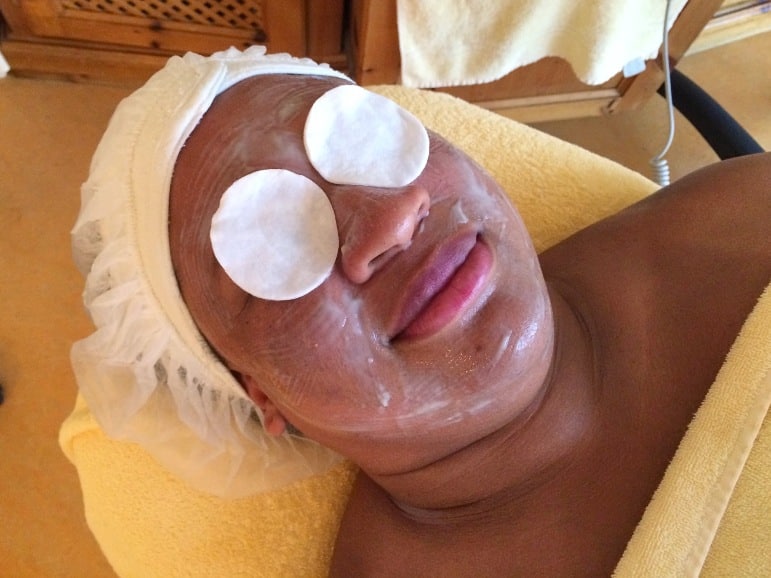 It has a beautiful bio green spa area, while the nude sauna has the lovely name of the ‘whisper zone’. There is also a textile sauna area.

The Das Central hotel has a charming Venetian themed spa and wellness centre. We also tried out three of the hotel’s signature facial and massage treatments and they all got the LiveShareTravel seal of approval. 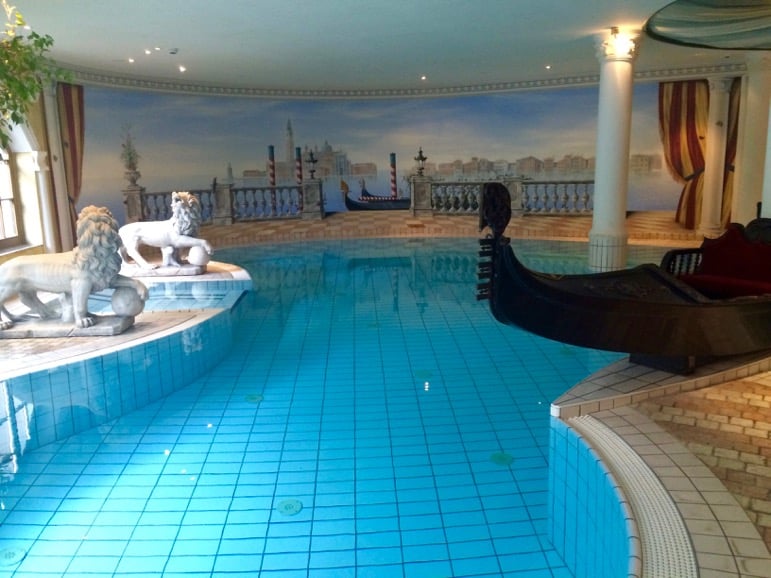