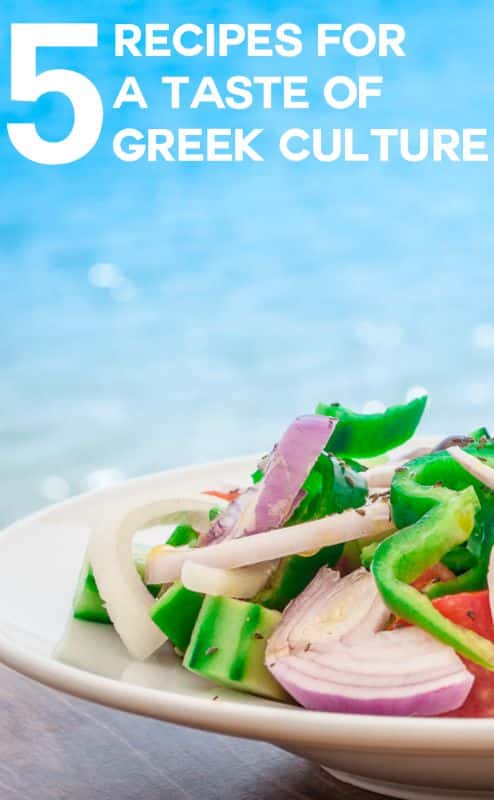 Greek cuisine – it’s more than a delicious dance on the tongue – it’s pivotal to the story of Greece.

Food lies at the heart of so many cultures, but in some countries it seems all the more central to the story of every day life. In the UK for example, we love our food, but it’s not as deeply engrained in all aspects of life as it is elsewhere.

Head over to Greece however and you’ll find food is a magnet – pulling families together for large mealtime gatherings. And with traditional Greek recipes still followed daily in kitchens across the country, it’s a part of the fabric of life that is rooted in the civilisations of Ancient Greece.

On a recent tour taking in Athens, Spetses and Porto Heli I was also taken on a journey through the country’s food – from the very traditional to shiny new fangled takes on these recipes. But the over-riding element was well-cooked, tasty, fresh, hearty food.

The tour took in elements of AFEA Luxury Travel Experiences‘ Epicurean Way package – one of five that promise a more culturally immersive take on luxury.

It took us to the Peloponnese, where I sampled modern takes on traditional Greek dishes such as red prawn saganaki and an array of dips such as taramasalata, humous and tzatziki served with pitta at the very stylish Amanzo’e Resort & Spa. Plus we dined at tavernas, feasting on Greek salads, calamari and fried courgettes by the blue of the Aegean Sea.

Greek food from Athens to the Aegean 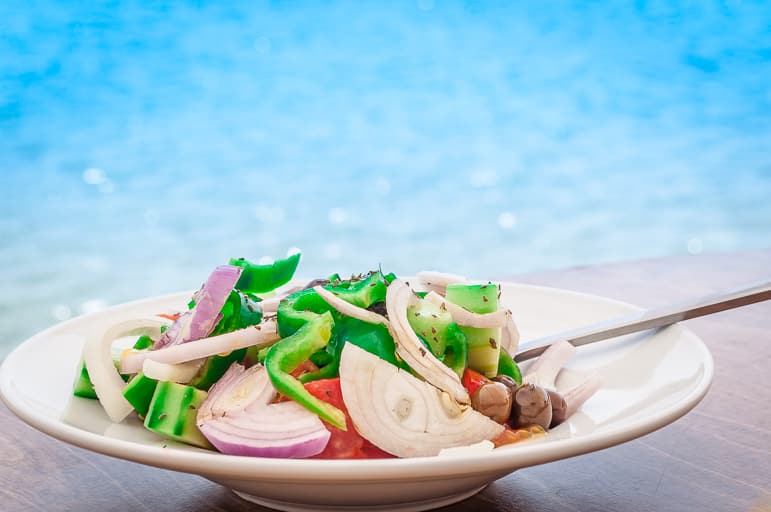 But oddly my foray into food in Greece began at a French restaurant. But then Spondi is one of Athens’ two Michelin-star restaurants, and the AFEA package intends to pack a luxury punch.

The food at Spondi was fascinatingly creative and tasty too, all in a beautiful magic garden-like setting. Sadly it didn’t deal well with food intolerances, as one of my group discovered despite advance notice. But perhaps butter-rich French food isn’t made for those avoiding milk/lactose. 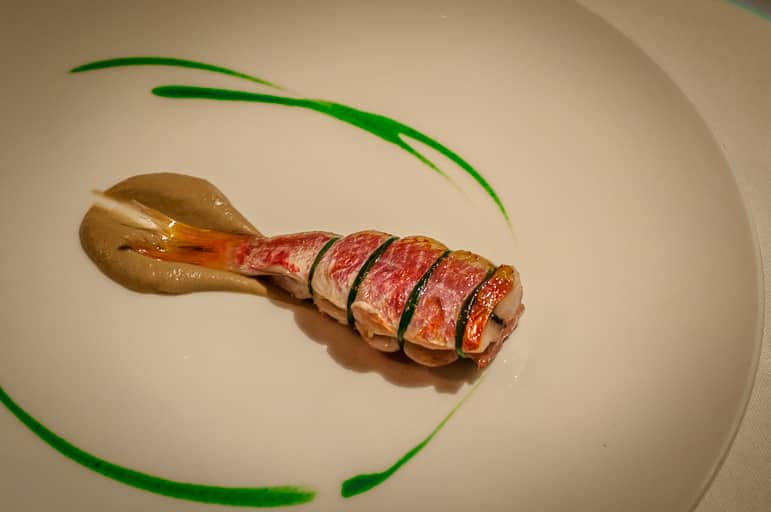 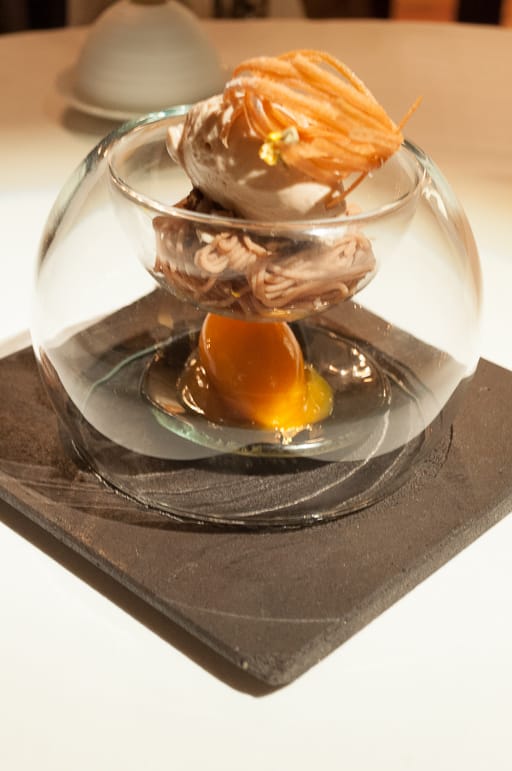 The next day however we were back on track with Greek fare – sampling well-known national dishes like humous and dolmades (stuffed vine leaves) on a cultural foodie tour of gritty, anarchic Exarchia and trendy Kolonaki areas with Athens Insiders.

But we also discovered some less expected culinary pleasures in the form of Cretan food, such as ever popular dakos – soaked barley rusks covered in tomato, feta cheese, olives, a drizzle of olive oil and herbs – at Oxo Nou. Then we crossed the street to ice-cream parlour Sorolop to sample something growing in popularity among Athenians – profiteroles. Served fresh with plenty of hot chocolate sauce they are a treat well worthy of a little detour. 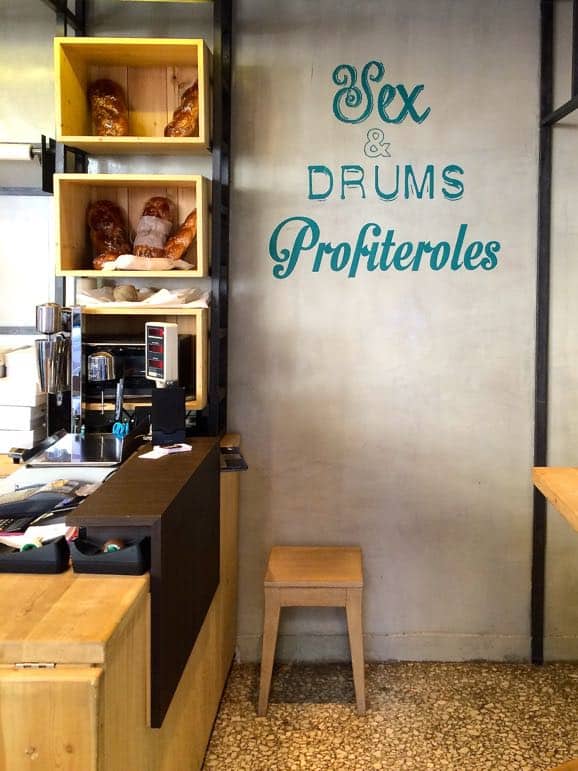 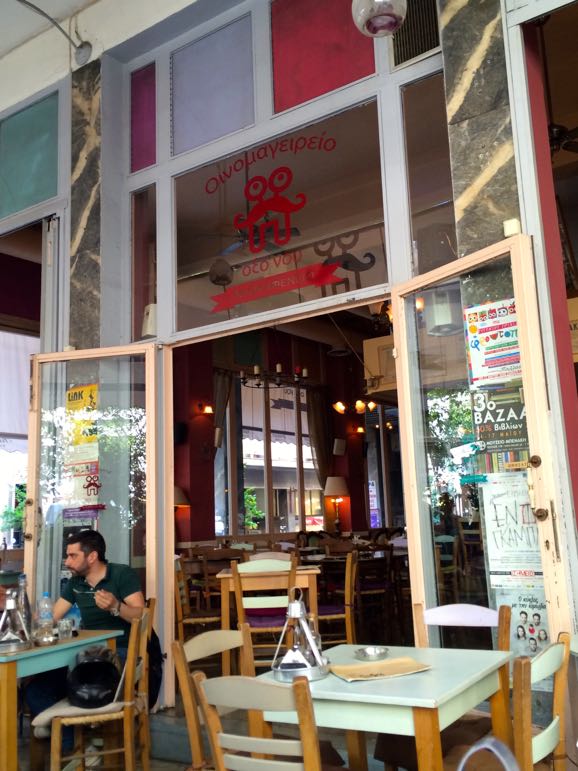 But nowhere in a city do you feel more a part of its food culture than at a market.

Amid the clatter of pans, the thumping chop of meat cleavers and the clamour of traders selling their fresh produce, I began my grounding in Greek cuisine. 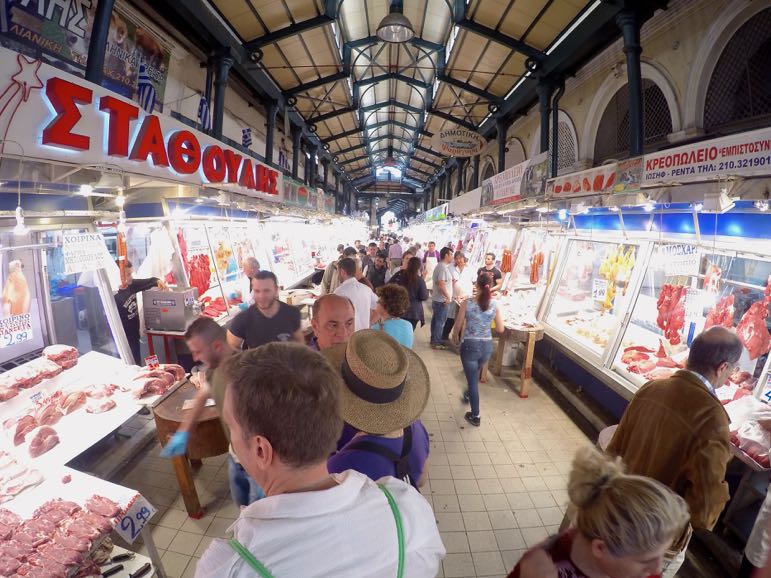 Varvakeios Market is the city’s main food hub. A clanging, banging battalion of noise that is common in every major food market. It was the starting point for our next big foray into Greek cuisine – a tour, this time with a more historical and educational perspective than previously, of what really makes Greek food. 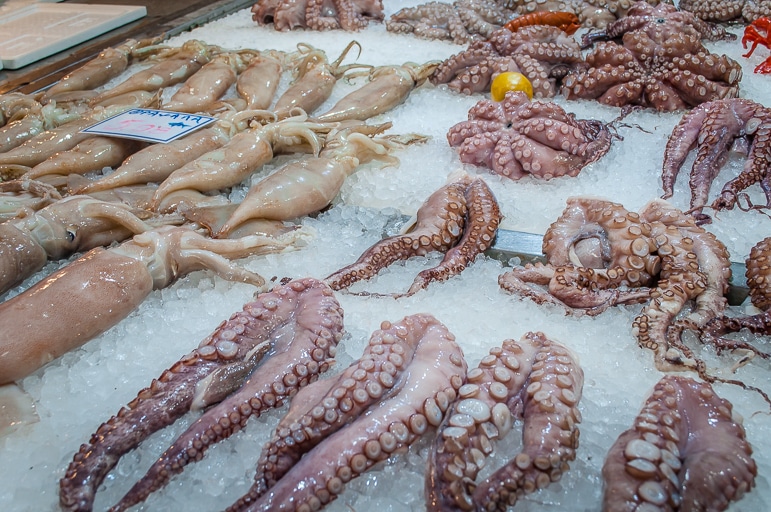 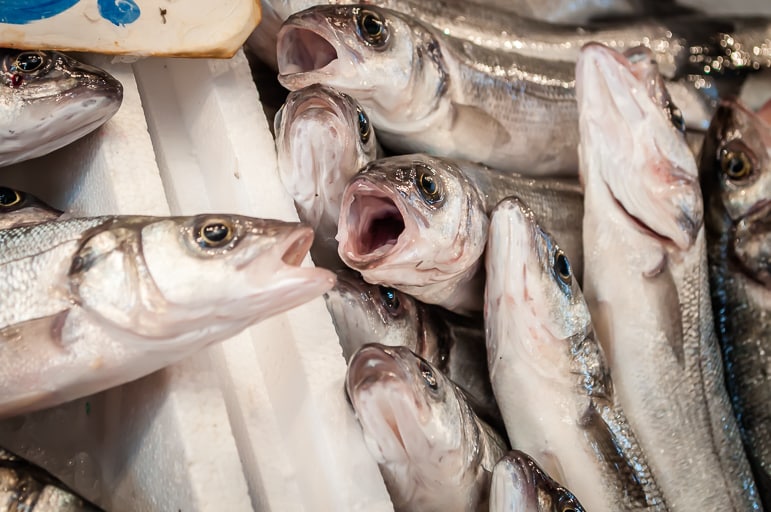 From stalls with rope-like cow intestines to goats butchered with such precision as to take on an odd appeal, we wandered to more with fish with their tails curling to the sky (a sign that they were fresh, our guides told us, highlighting other indications, with a warning that you needed to look for all of them as unscrupulous traders used some tricks of the trade to make their fish appear fresher than it was). 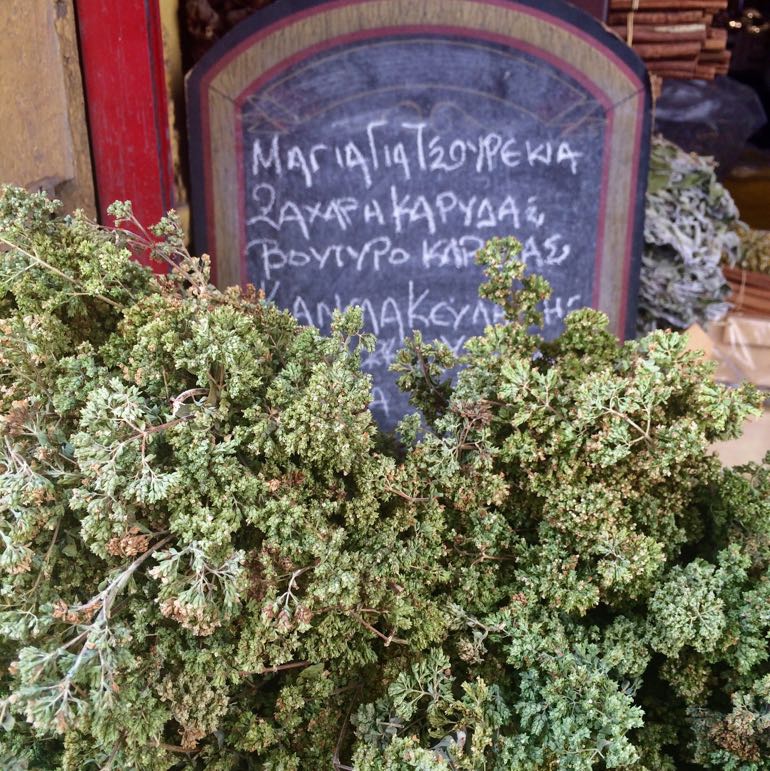 Then we were outside, wandering the vegetable market past shiny black olives and the glorious green of almyra and vegetables I’ve only ever spotted in Greece, then on to stalls laden with herbs like wild oregano and delicatessens bursting with other specialities like spiced red sausages.

The hiss of steam, crackle of hot fat and the expectation of plating up, and we were ready to eat 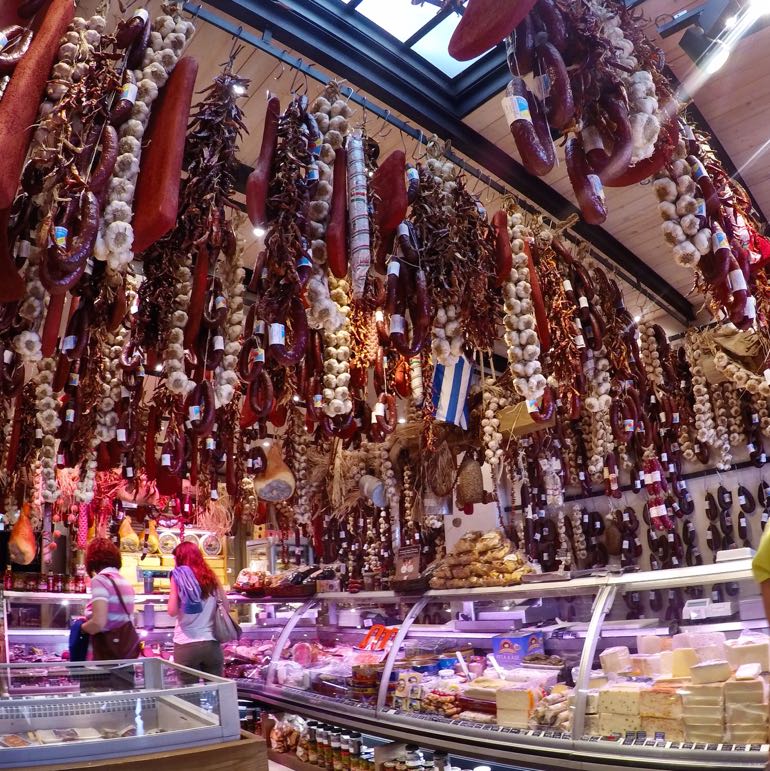 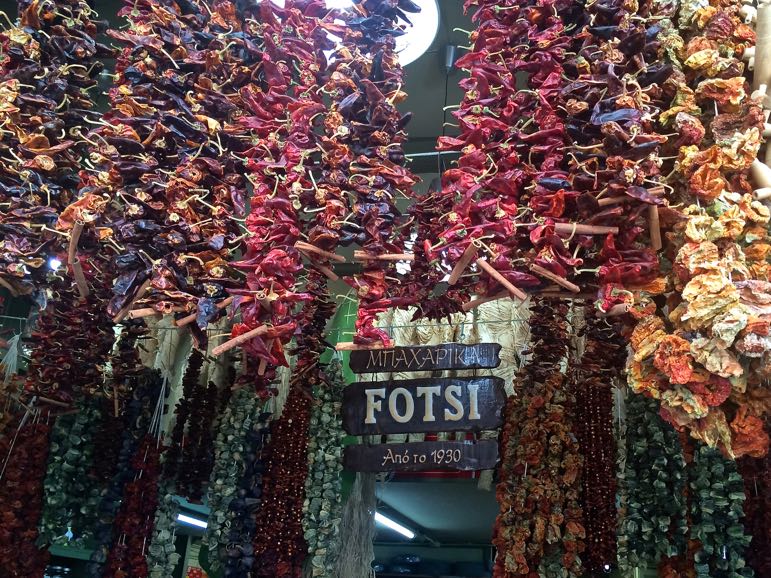 Arriving next at Athens’ Gastronomy Museum we first took in an exhibition before we would try our hand at cooking traditional Greek recipes.

The exhibition was fascinating – part art, part social history, it explored the Grecian passion for food, and its role in family life. 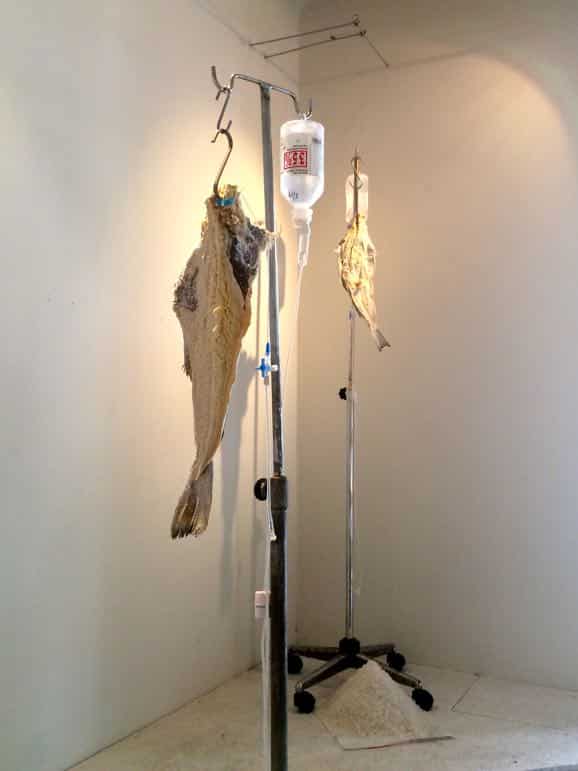 Salted cod was attached to a saline drip in one piece adding so much salt it formed a stalagmite of crystals on the floor below. In another, Portrait of My Family, an assemblage of metal kitchen utensils revealed how food was at the heart of the artist’s family. It portrayed the family’s emotional ties as well as a level of nostalgia. 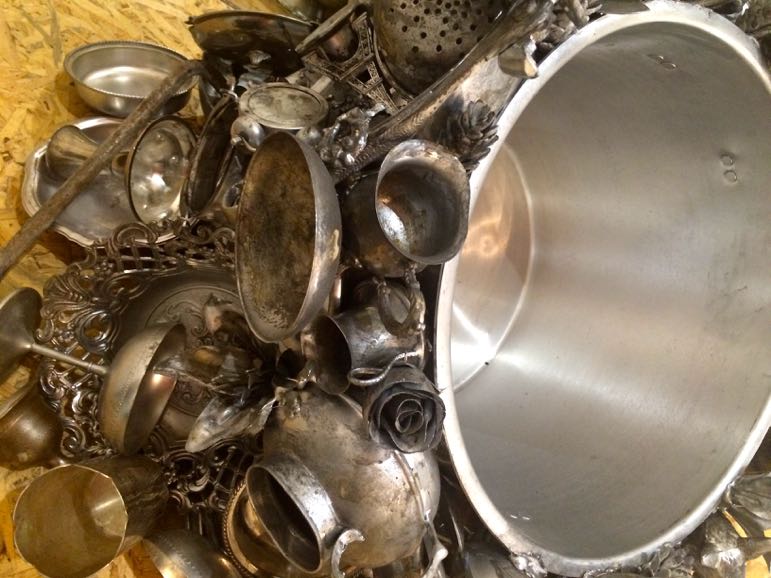 It was a fascinating collection, but with tummies rumbling – and plenty of work still to do – we met with our chef Costas in the open air kitchen to be taken through the preparation of a number of great Greek recipes.

We made meals we’d only ever tasted before with no knowledge of how they’re actually put together – traditional Greek recipes for popular dishes like spinach pies, saganaki and halva. Plus we tried our hand at seafood and fish recipes. 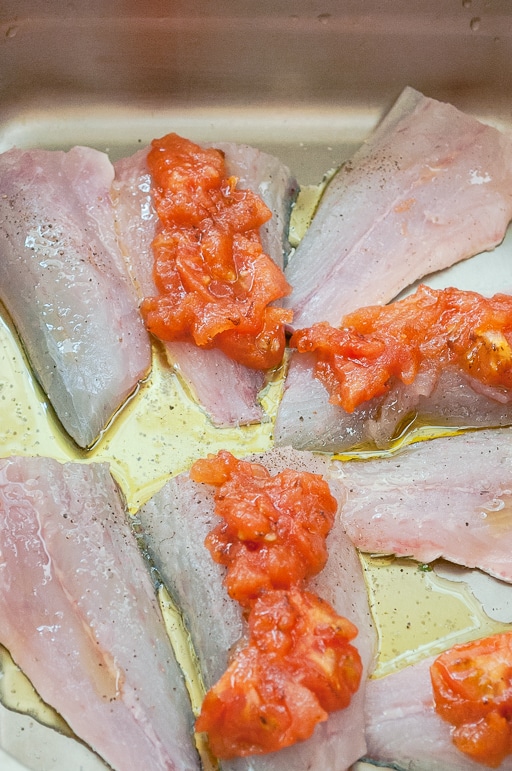 After the hiss of steam, crackle of hot fat and the expectation of plating up, we were ready to eat. And it was wonderful. Fresh, flavourful, satisfying.

I also discovered that some foods are only ever exceptionally good in their country of origin. Hearing I was a fan of Greek yogurt Costas bought some from the market and served it simply with black pepper first to accompany our mains – it was thick, creamy and unlike anything available back home. I nearly ate the lot, saving just a little bit to be topped with honey for a sneaky pre-dessert dessert. 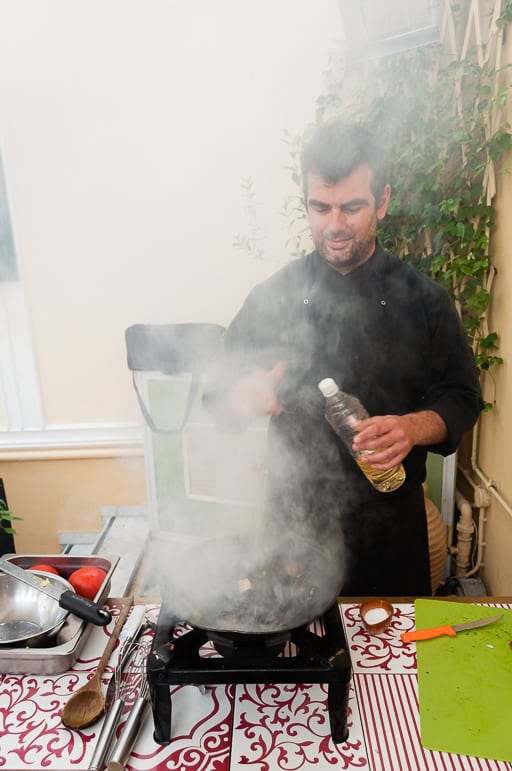 1 leak (the white part only), cut into thin slices

100g of grated manouri cheese (or feta cheese, if you cannot find manouri)

Salt and pepper to taste

For the filo pastry 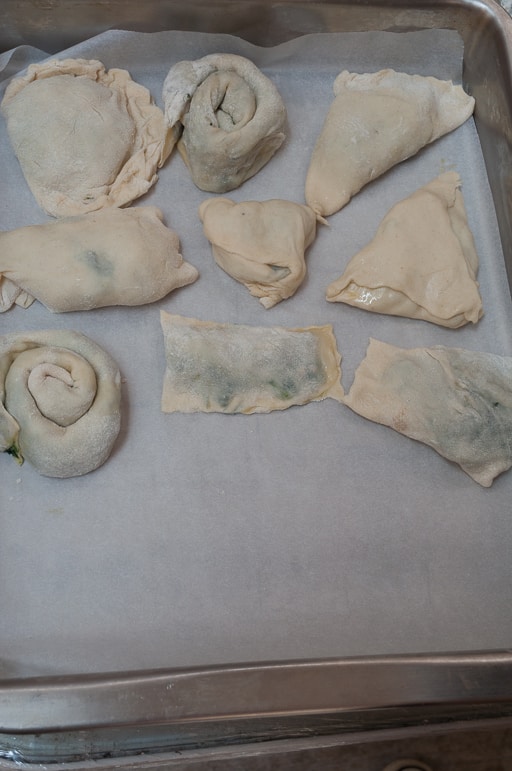 For the filo pastry, add all the ingredients and as much water as it needs. Don’t forget to work the dough very well. Leave the dough on the side to rest.

For the filling, sauté the leeks and spring onions in olive oil, just to get them soft and combine them with all the other ingredients. Season to taste. Open the filo pastry as thin as you can and then fill it in. Put some oil on the filo before you roll it into any shape. Bake at 200 °C.

Lemon zest and juice from one lemon 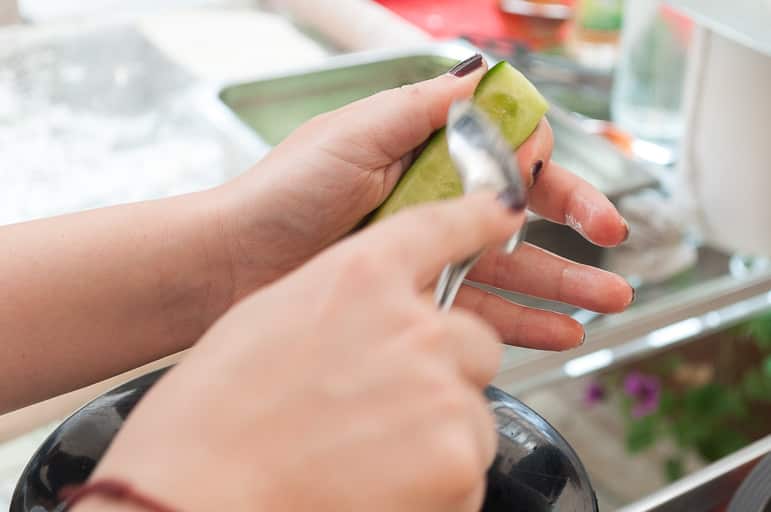 Add all the ingredients in the blender and start blending. Sieve the mix and serve with a twist of lemon.

Half a clove of garlic

A pinch of ginger

A pinch of chilli 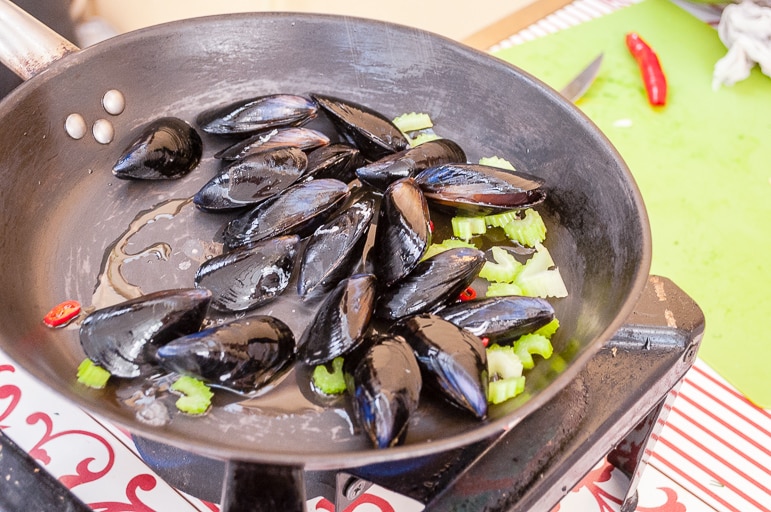 Sauté the mussels in olive oil for one minute on a high heat, add the saffron, chilli, garlic and ginger. Then add salt, pepper and wine. Let it simmer for one minute and serve.

Greens blanched (preferably Greek almyra, but could substitute with samphire) 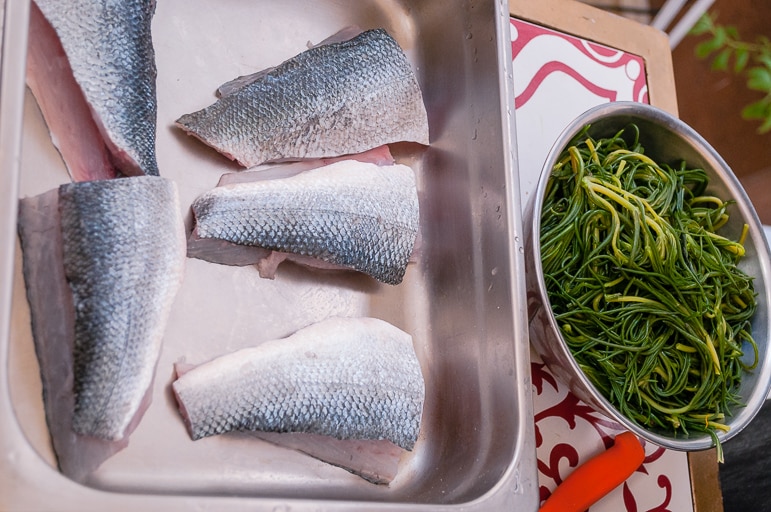 Sauté the tomatoes in olive oil (low heat), let them caramelise, season and set aside. Set the two fillets of the sea bass with the skin side down, season and place the tomatoes over one fillet, to cover all the flesh. Add parsley and maybe a little grated parmesan cheese and cover with the other fillet.

Sauté the fish skin side down in olive oil, until the skin gets light brown, and do the same for the other side. Serve with the greens, adding olive oil and lemon.

Halva with orange and ice cream 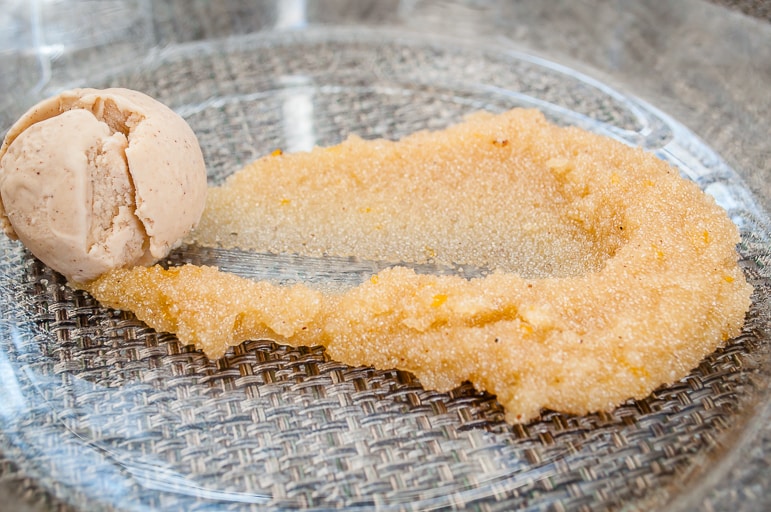 Combine sugar, water, orange zest and cinnamon together in a small saucepan. Let it simmer for five minutes.

In low heat, sauté semolina in sunflower oil for five minutes until it becomes slightly brown. Then, add the syrup in the semolina and continue whisking. Serve immediately with ice cream (cinnamon ice cream works well with this recipe if you can find some) and a slice of orange. 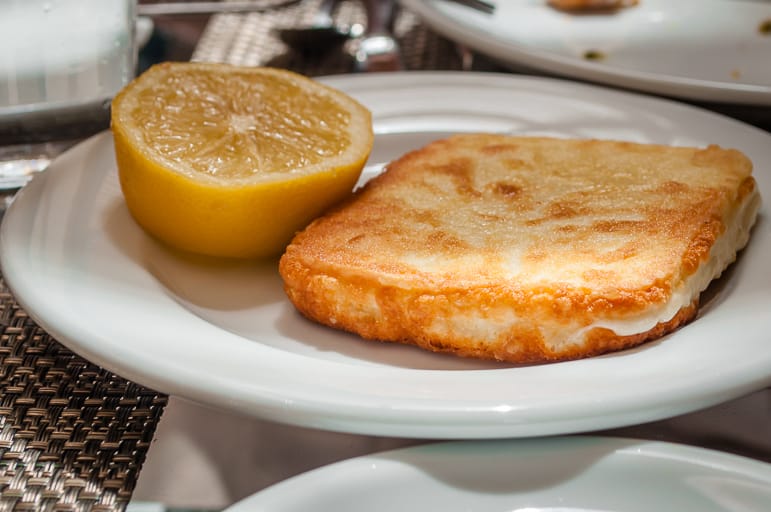 All views and cravings for Greek food are, as you would expect, entirely my own.

Places to visit in London – culture in east London, including a stay at Cheval Residences Three Quays
Places to go in Andalucia, Spain – where to enjoy the Spanish coast