When you think of countries with a rich history, Germany doesn’t immediately spring to mind. Yet Germany has 39 UNESCO World Heritage Sites, each providing wonderful insights into its culture and heritage.

The southern region of Baden-Württemberg is perhaps best known for its natural attractions. The Rhine borders the west, and the Danube starts at the region’s heart in the midst of the Black Forest. And then there’s Lake Constance, also known as Bodensee, the third largest freshwater lake in Europe. But beyond these natural attractions, it was here that our explorations of Germany’s history and UNESCO World Heritage Sites would begin.

Following a lengthy but relaxing eight-hour train journey aboard a DeutscheBahn train from Leipzig to the southern city of Constance, we arrived in the late afternoon. Constance is a university city which gives its name to the lake… or the lake to the town. Either way, its has more to offer than just lakeside views. 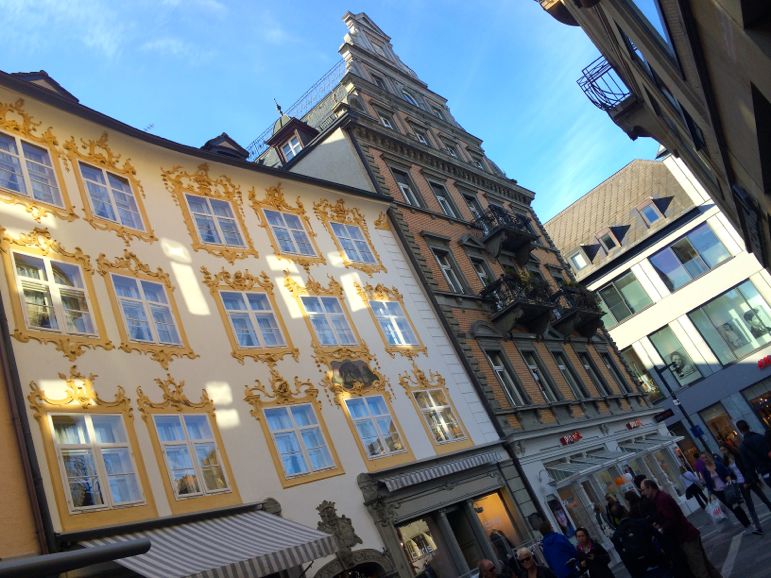 Its city centre is home to a smörgåsbord of architectural styles, including the rococo Haus zum Wolf and the city’s renowned Gothic cathedral.

As Constance borders Switzerland it thankfully suffered little or no bombing during the Second World War, so much of its old buildings have been preserved. They sport inviting wooden doors and odd architectural flourishes with legendary tales like a little stone bottom hovering above a doorway. Legend has it if you kiss the bottom it will bring you good luck. 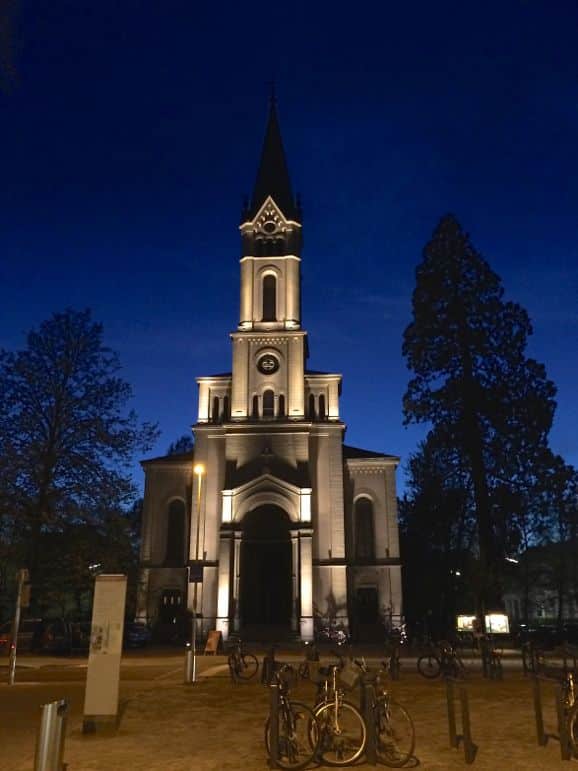 Constance is also the birthplace of Count von Zeppelin, of the famous airships. And there is a fascinating Zeppelin museum at nearby Friedrichshafen.

However, the city’s most famous attraction is Lake Constance. We stood taking in the last of the evening’s light as the sky burned from blue to ochre, yellow to orange and pink. From the German side of the lake we saw Switzerland stretching out before us on one side, while far out of sight at the lake’s most westerly reaches it bordered a third country, Austria. 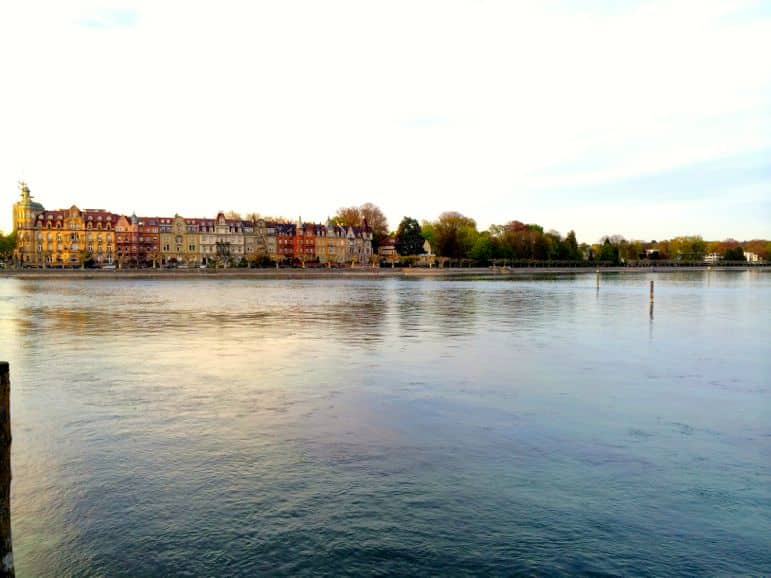 That evening we stopped at the Brauhaus for dinner, which served traditional German stews, meats, sausages, spätzles, pretzels and beer, and in great quantities. 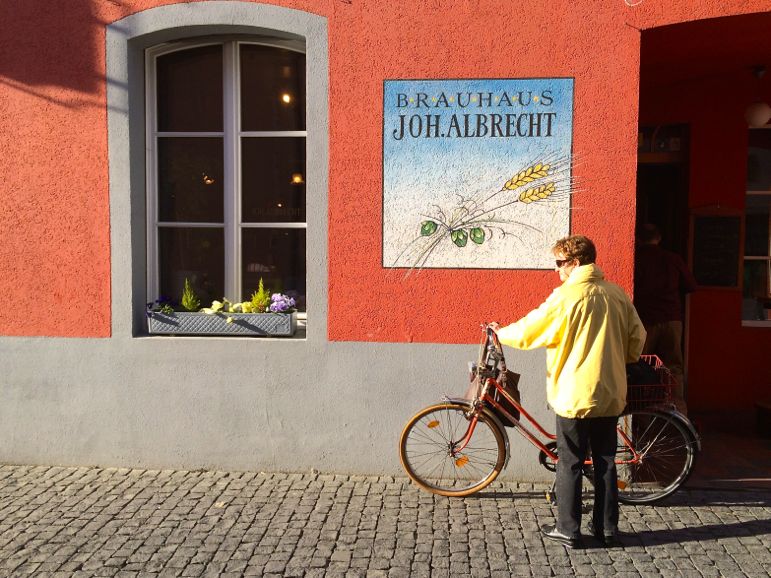 We stayed at the lovely Hotel Constantia, a mere 100 metres from the Swiss border. We couldn’t resist strolling over the border and crossing into Switzerland that evening. 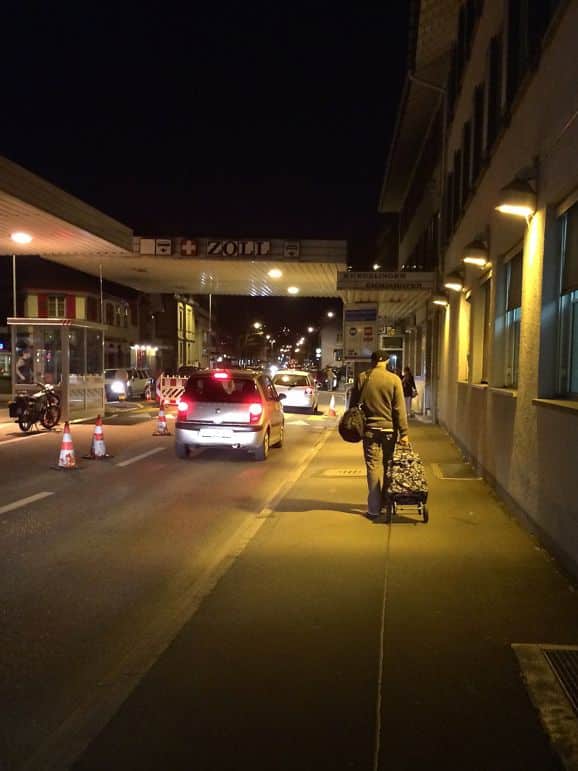 History on the water 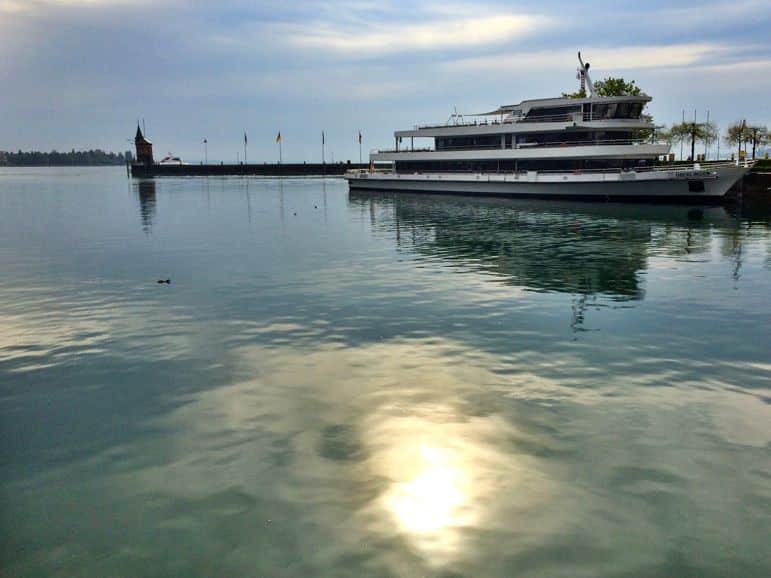 The next day, following a one hour ferry ride we landed on the island of Reichenau to the east of Constance and explored one of Germany’s UNESCO World Heritage Sites. The island gained this recognition in 2000, in part due to its Benedictine Monastery, which was founded in 724 and has been central to the religious and cultural life of islanders and communities nearby. 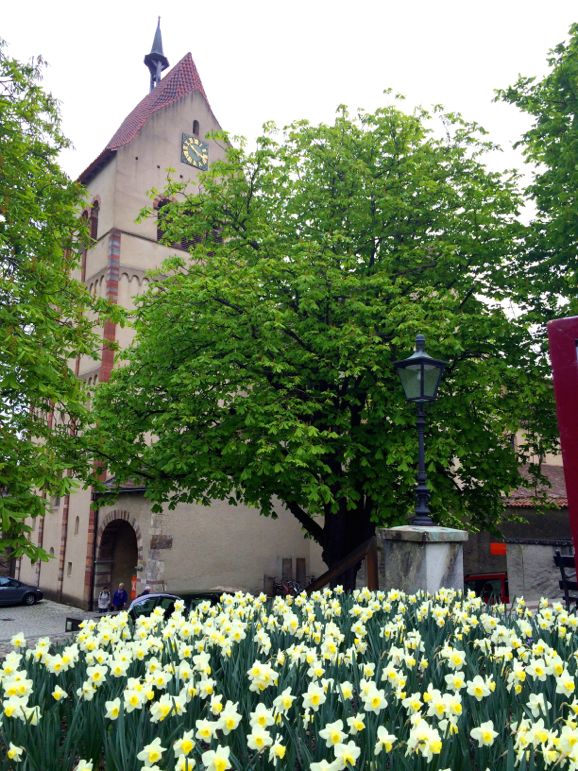 The churches of St Mary and Marcus, St Peter and St Paul, and St George, built between the 9th and 11th centuries, reveal more of the monastic architecture of the period with murals which have been painstakingly restored. The churches and their murals were also instrumental in Reichenau becoming one of the country’s UNESCO World Heritage Sites. 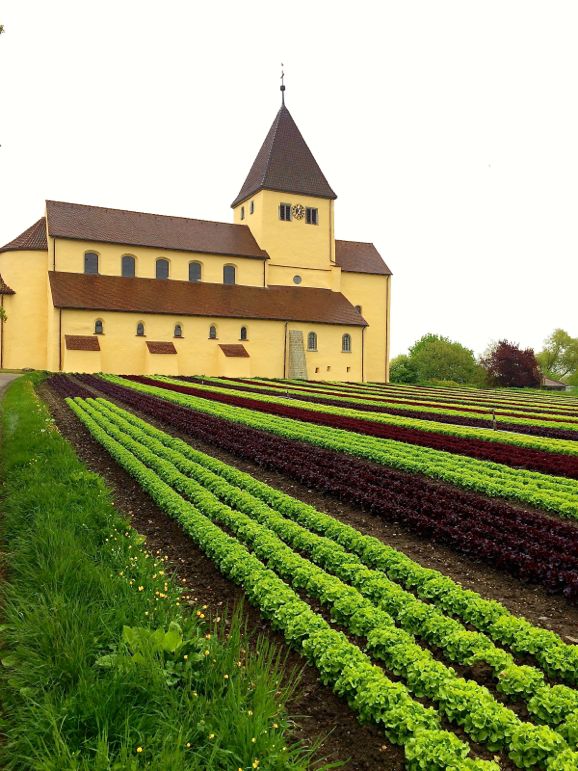 More than 20 churches and chapels were built on Reichenau and the island has been attracting artists and intellectuals for centuries.

But for an island of such cultural significance it is surprisingly diminutive. Reichenau is approximately five kilometres by one and a half kilometres, and has a population of 3,500. However it has a big reputation for its production of fruit, vegetables and grapes. For centuries monks on the island have produced wines that are rightly famous. 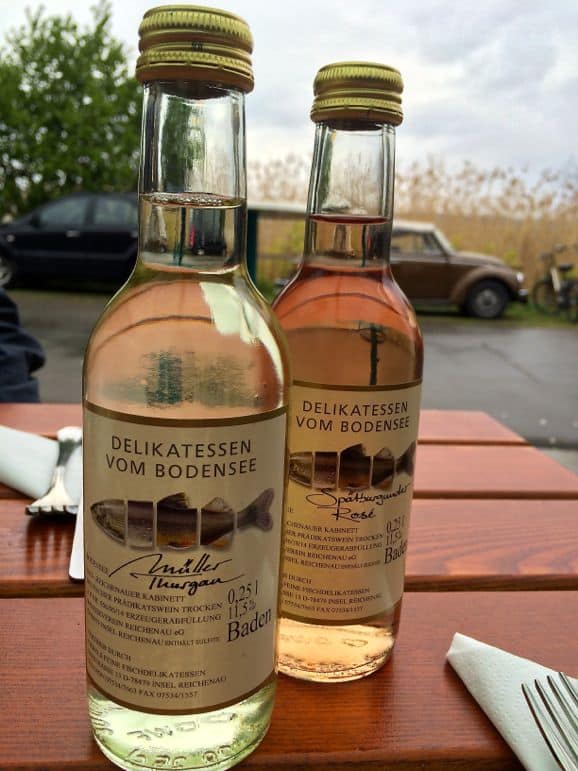 Leaving the UNESCO World Heritage Site of Reichenau we headed for a modern heritage experience at Campus Galli. Though I use the word ‘modern’ loosely.

Many history lovers have longed for the power to travel back in time and see the world as it once was. Reluctantly we accept it’s merely a dream.

However, we discovered a genuine historical experience at Campus Galli, a project near the town of Messkirch. Here, modern-day artisans are creating a piece of work that gives enormous insight into the lives of our forefathers. 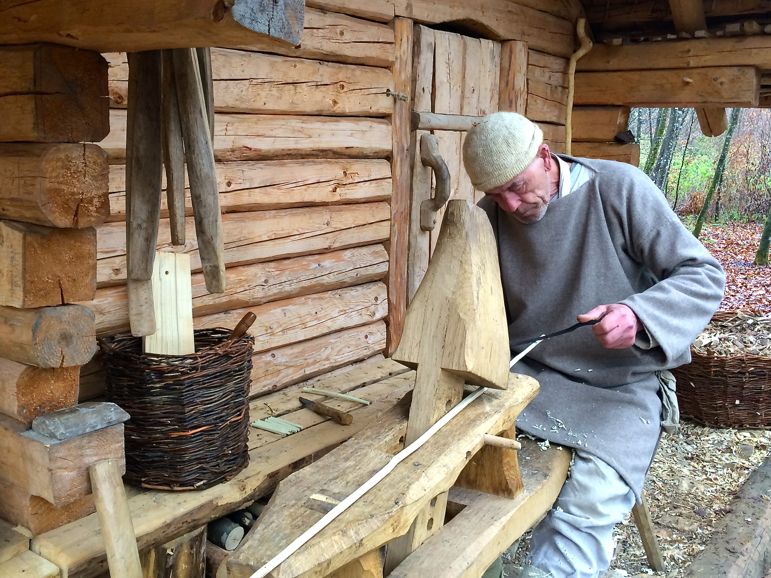 Using drawings of a 9th century monastery that was never built, construction has finally begun on the site. While it is well over 1,000 years late, the compound is being built with only the methods, tools and materials that were available in the 9th century.

Mechanical machines and tools are forbidden on the site. There is no electricity, raw materials – wood, clay and stone needed for the construction is taken from the site, and all the craftsmen and women wear clothes from the period.

We were given a fantastic tour of the site by Andy, Campus Galli’s potter. 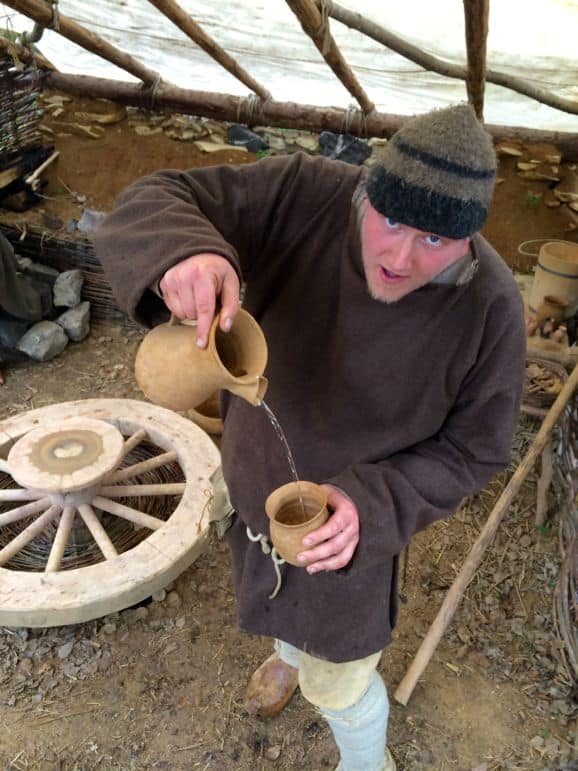 Emerging from wooded areas into clearings we came upon small dwellings, were the craftspeople – stonemasons, carpenters, blacksmiths, potters, beekeepers, basket makers and many more – employed their skills to create this magnum opus. 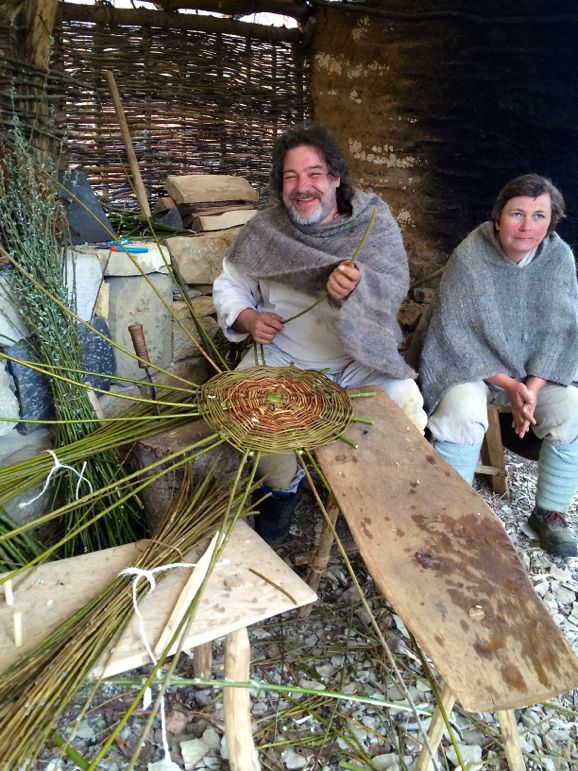 The Campus Galli which began in 2013 is slowly taking shape, but will take an incredible 40 years to complete.

This medieval masterpiece is a truly fascinating and historically accurate development providing a unique experience and an absorbing day out. No doubt it will one day be another of Germany’s UNESCO World Heritage sites in the future.

For now, it is the closest we will ever get to real time travel.

Find out more about Lake Constance and about Germany’s 39 UNESCO World Heritage Sites.