Home    Luxury Holidays    Asia    Malaysia    Where is Borneo? Relax and let the question take care itself 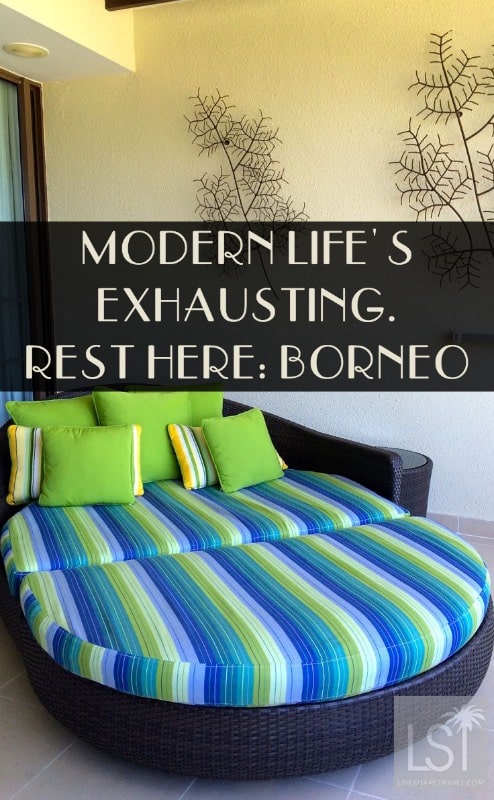 If you’re anything like me, your mind is a constant whirring buzz. Generating ideas, powering through to-do lists, racing to deadlines. It’s an unremitting spinning top of activity. So on a recent trip to Borneo, I made the most of all the relaxation time I could find. But just where is Borneo? And what made it the ultimate in restfulness?

Borneo is an island south-east of Malaysia and Singapore, and surrounded to the south by the islands of Indonesia. In fact Indonesia makes up a large swathe of southern Borneo, while the Malaysian states of Sabah and Sarawak are in the north, surrounding one of the world’s richest nations, Brunei.

Now you know where it is, what is there to do there? Everything – from wildlife encounters (Yes, Orangutans!), to mountain hikes, national parks to explore and a whole lot of experiences in between for couples looking for a romantic break. But after doing all of the above I was looking to relax.

Terry and I will often spend one day exploring a place and the next relaxing at our hotel – reading a book by the pool, or soaking up sunshine on the beach.

Faced with too much choice, we struggled to decide on exactly which spot was ‘ours’. The beach was deserted.

So after a day wandering around Kinabalu National Park – discovering the world’s largest flower, sipping Sabah Tea, and walking the hairy canopy walk through the jungle, we were ready for a little rest and relaxation. And at our luxury hotel, the Shangri-La Rasa Ria Resort, we were promised a perfectly relaxing experience. It’s something I’ve termed “relux”. 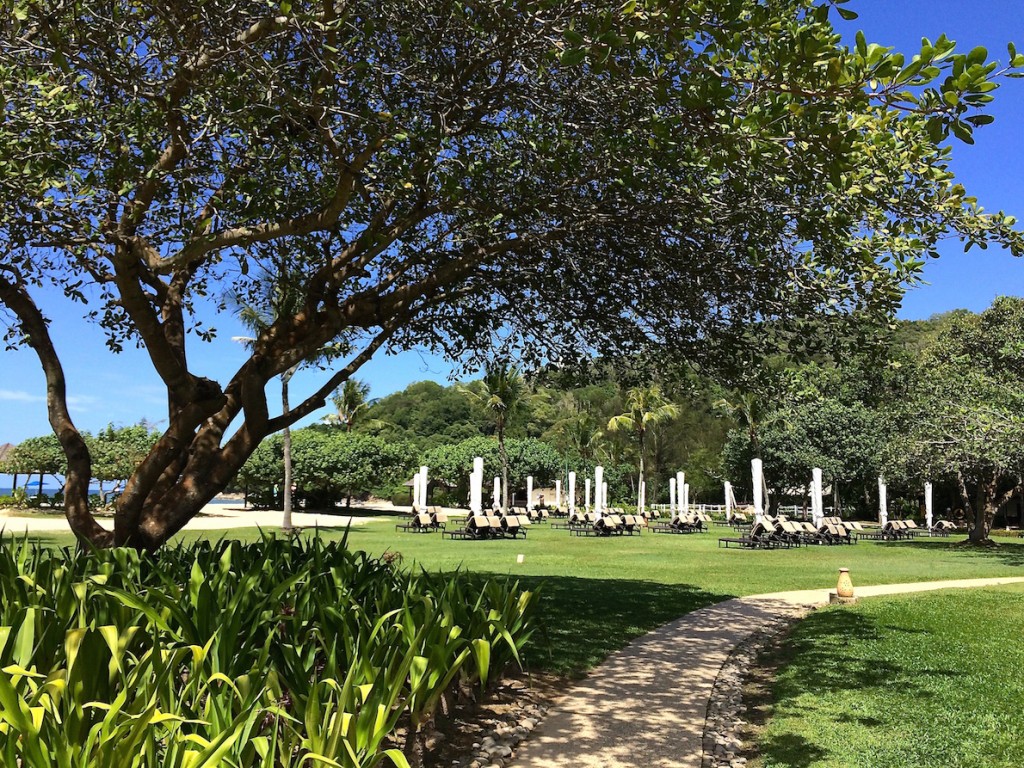 Relux is the coming together of a restful environment and peaceful experiences within the comfort of luxury. One can exist without the other. But bring them together and it creates symbiotic pleasure. The Shangri-La is a great example of this. We were staying in an Ocean Wing suite – a large space with a balcony replete with day bed and outdoor bath. Relaxing enough in itself. But we headed out, with plans to return for a lounge on the balcony later. 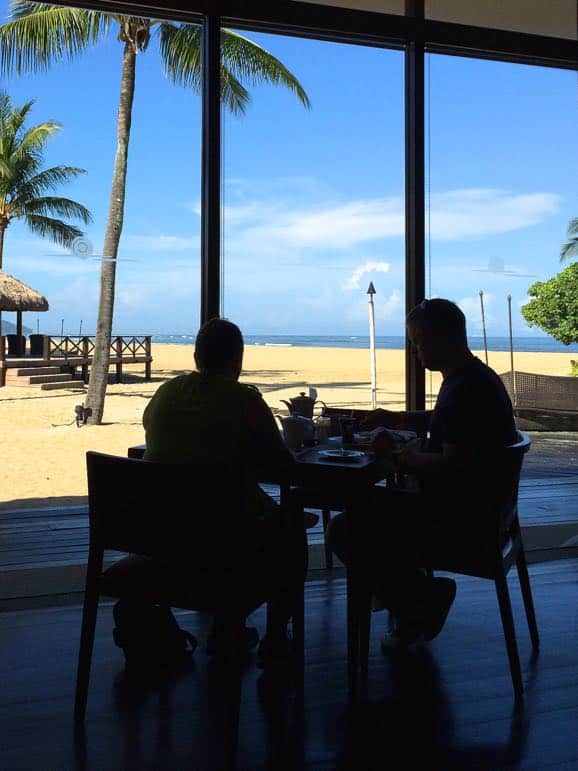 We started our day with a leisurely breakfast at the on-site Coast restaurant. And that was the beauty of the Shangri-La – everything was on site. The resort has a nature park (more orangutans!), a spa, numerous restaurants and bars, and fronts onto three kilometre long, and very wide, Pantai Dalit Beach.

And it was these white sands that we made our first stop of the day. A wide stretch of beach – from the resort to the infinite blue of the South China Sea – it took us a while to walk to our spot. And then, faced with too much choice, we struggled to decide on exactly which spot was ‘ours’. The beach was deserted. Three whole kilometres of white sand all to ourselves. We didn’t quite know what to do with it all. 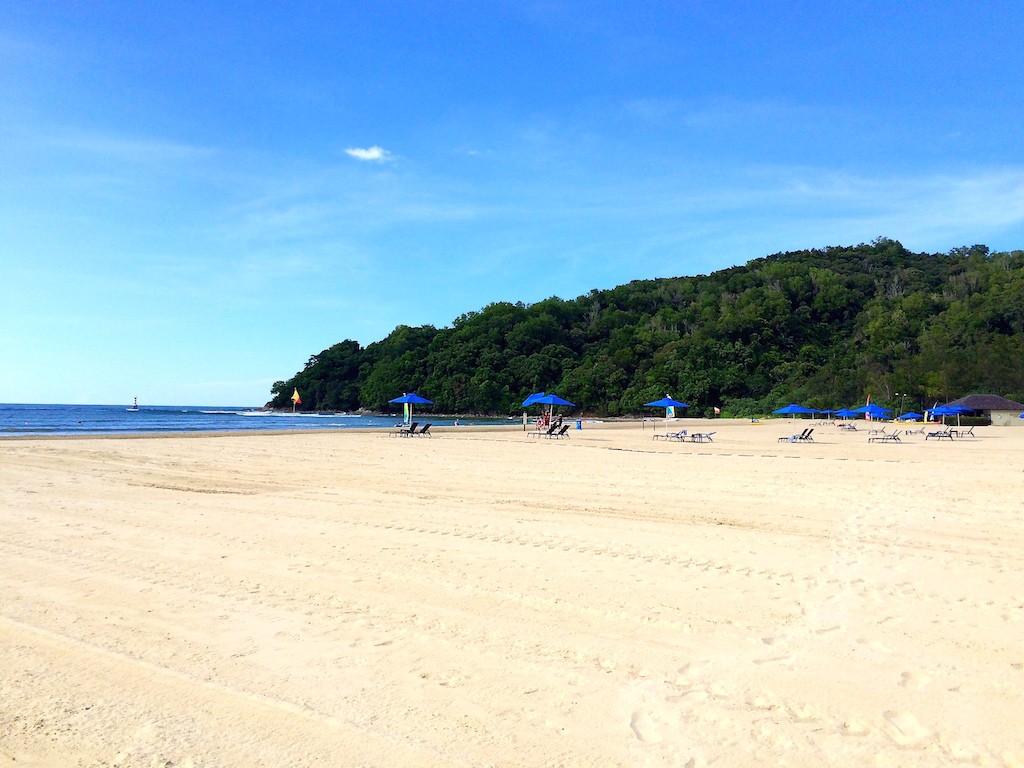 Eventually we found some loungers and an umbrella we liked the look of, sunk our feet into the sand and lay back in the sunshine. 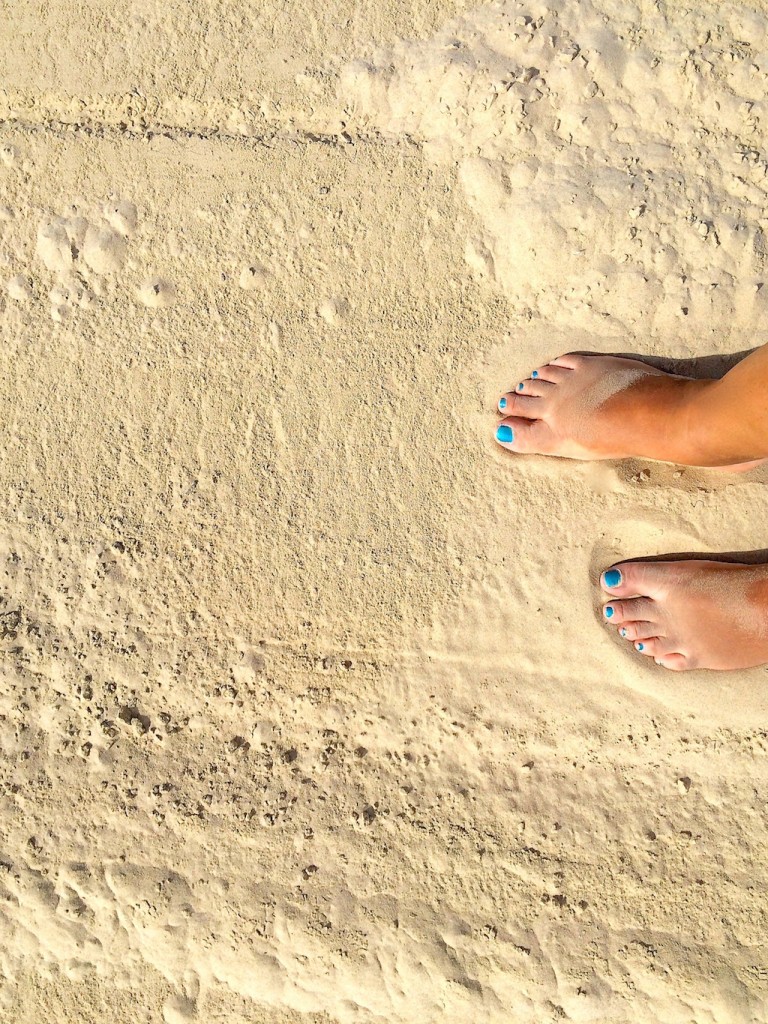 Sometime later, ready for a swim, we waded into the translucent water as it rippled at the shoreline. With very shallow water it was a fair walk out to swimmable depths, but soon we were floating on the tide letting our cares drift away.

That afternoon, following a Malaysian satay lunch with coconut water fresh from its green husk, we headed to the spa for treatments.

Spas are one of the things we love about luxury hotel stays. This is especially true when you are abroad and the spa utilises local herbs, oils and techniques in your treatment.

We had an indigenous massage. Starting with a foot ritual, we then lay down as our muscles were soothed by stroking hands and varying muscle manipulations honed over centuries by Borneo’s numerous tribes.

My awareness leaving my body with the easing of every muscle, I drifted into restfulness. My mind released its hold on my rush of thoughts and I sunk into a slumber.

A whisper to sit up brought me round and I slowly made my way back into the world feeling refreshed, my mind lighter, my muscles looser than they’d been in a long while. 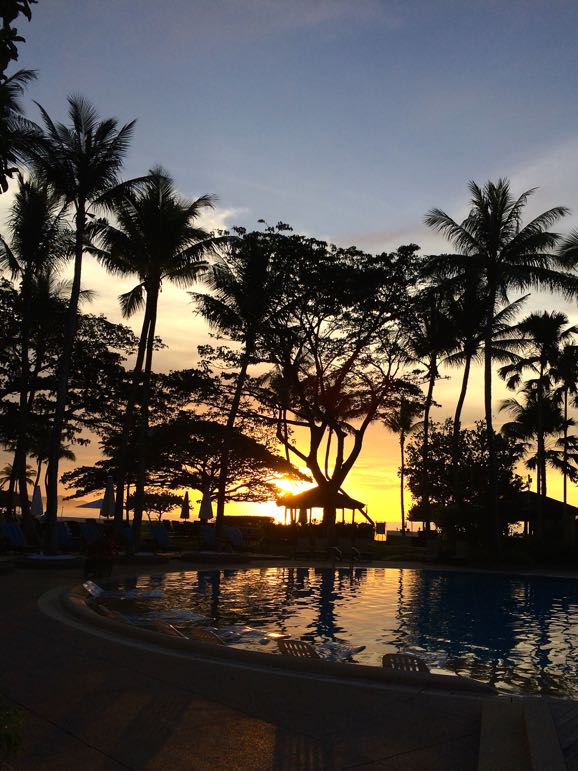 Emerging from the spa, the sun was burning the sky pinkish-orange – Sabah’s renowned sunsets bringing an end to another perfect day. We headed to the beach bar, and ordered sundowners to toast the day’s close and the ensuing evening. 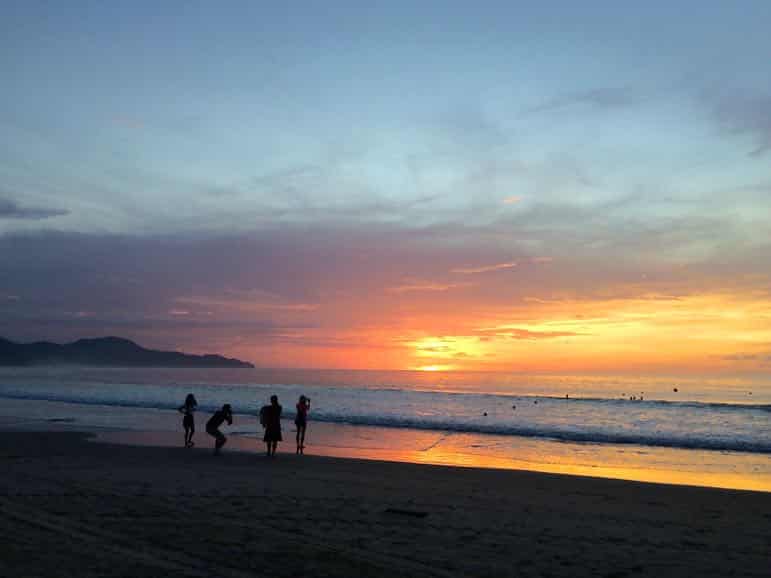 Where is Borneo, I mused. At the junction between blissful relaxation and heavenly adventures.

See video of our time in Sabah. 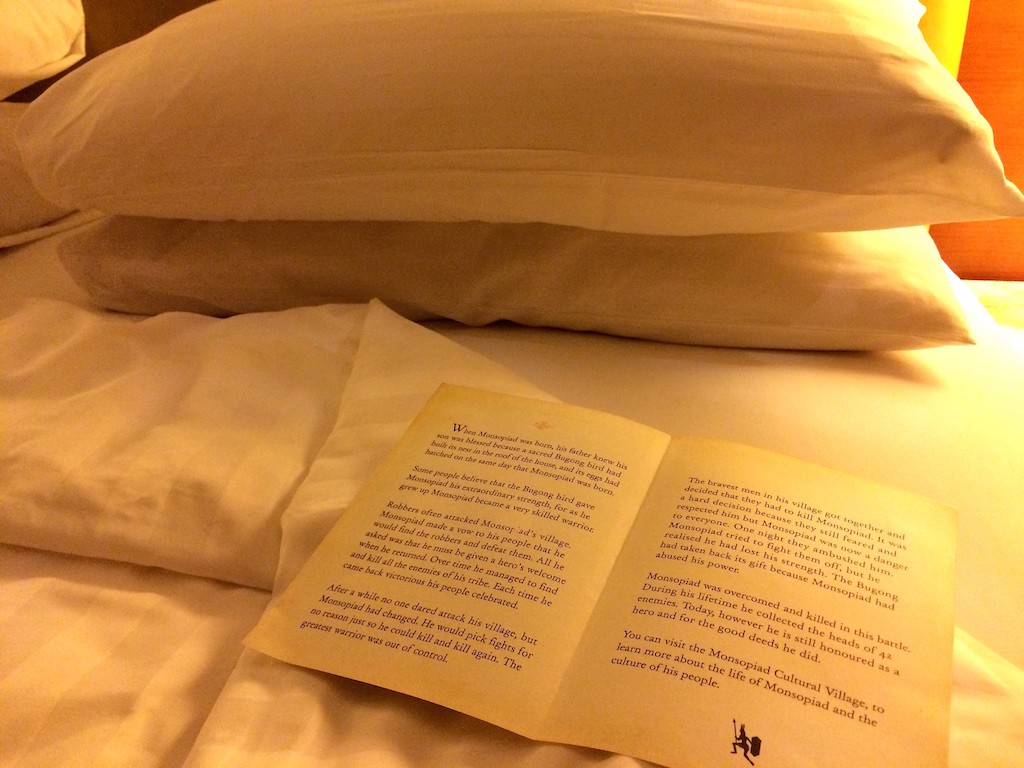 Book now with this exclusive special offer from Premier Holidays: 12 nights at the Shangri-La’s Rasa Ria from £1,199 per person, incl. flights with Royal Brunei Airlines. Available for booking until March 31, 2015. 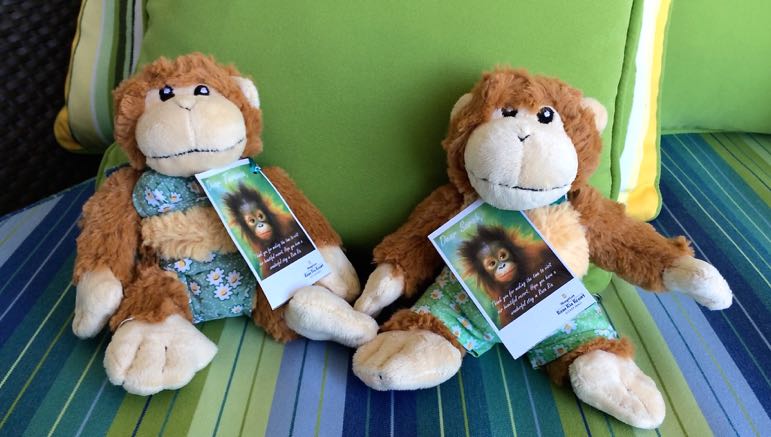 We visited the island of Borneo as part of a project with iambassador, in partnership with Royal Brunei Airlines and Sabah Tourism. As always all opinions are our own.

Giant flowers, a heady walk and a nice cup of tea at Mount Kinabalu
Weather in Austria makes Weissensee a summer high