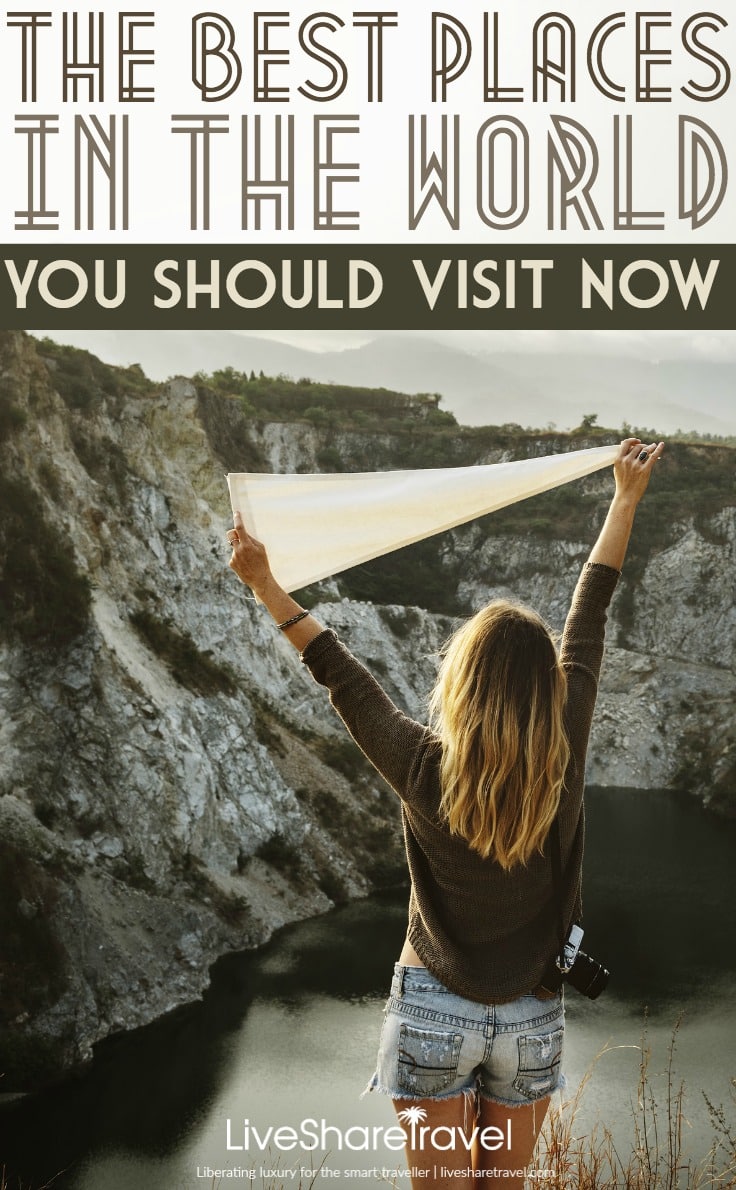 During a lifetime of travels, it’s likely that there will be just a handful of places you consider the best places to go in the world.

Over the last year, we have packed our bags numerous times, filled with the promise of somewhere new but with no concrete expectations.

By travelling with an open mind, we have once again discovered a fabulous selection of destinations that have captured our hearts, minds and recipe books!

But as you will discover with our latest curation, they each have their own personality and individual story to tell.

And for us, that is the very core of travel. The experiences of a new destination are that new chapter, places with rich dialogue and pictures that are simply too hard to put down.

So allow us to begin and share our top seven irresistible destinations that we think you’ll love too. And if it ignites your sense of adventure, then it’s time to put pen to paper and start planning your own travel storyline.

7 of the best places to go in the world

“I am currently counting down for season eight of Game of Thrones, so when I discovered that we would be visiting the key film locations for Winterfell and the Dark Hedges just outside of Belfast – I was ridiculously excited for our trip. 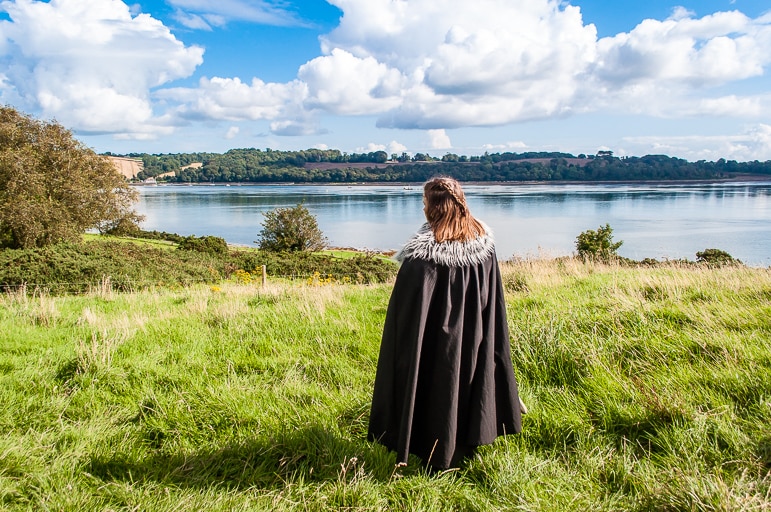 More scenes from the show have been shot in Northern Ireland than any other destination, so combined with the fact that it’s less than an hour’s plane ride from London, it made it all the more appealing to me.

But this trip wasn’t just about the Starks from the hit TV series – Northern Ireland is a place of stark contrasts too. I stopped for a moment at the city’s peace lines, meandered around the bustling St George’s Market and ventured further afield to tiptoe across Carrick-A-Rede rope bridge and take in the Giant’s Causeway on the coast. 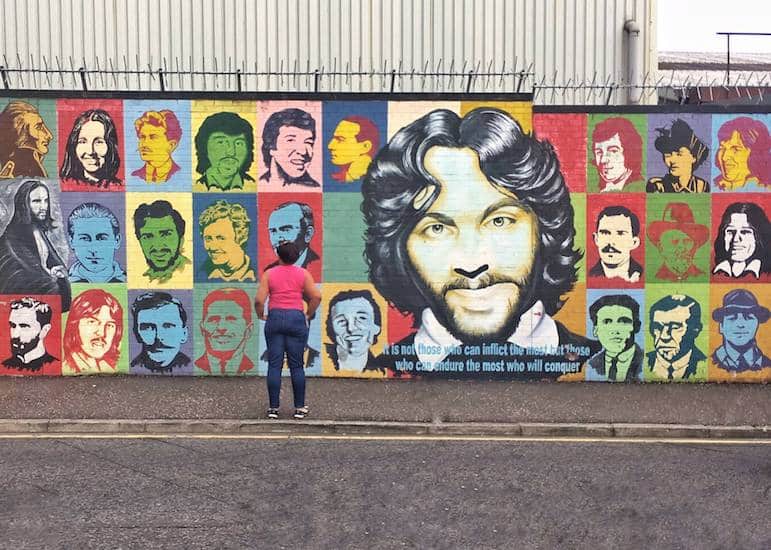 And with so much more in between, I realised that this is a city with real variety with the warmest welcome. Making it a good option for a cultural girls weekend away or a family break which will satisfy even the fussiest of visitors.” ~Sarah

“We have a bit of a love affair with Thailand, and we even got married there, so it’s safe to say Sarah and I have always had a bit of a soft spot for the Land of Smiles.

But when we headed there in October with Abercrombie & Kent it was an altogether different experience, but one that took us even deeper into Thai culture and customs (and luxury – with two of our hotels coming with butler service – and now we’re ruined!).

We were pitted against each other for a number of challenges, including cooking, sampling Thai food – including insects, exploring our creative side and giving Muay Thai boxing a try. 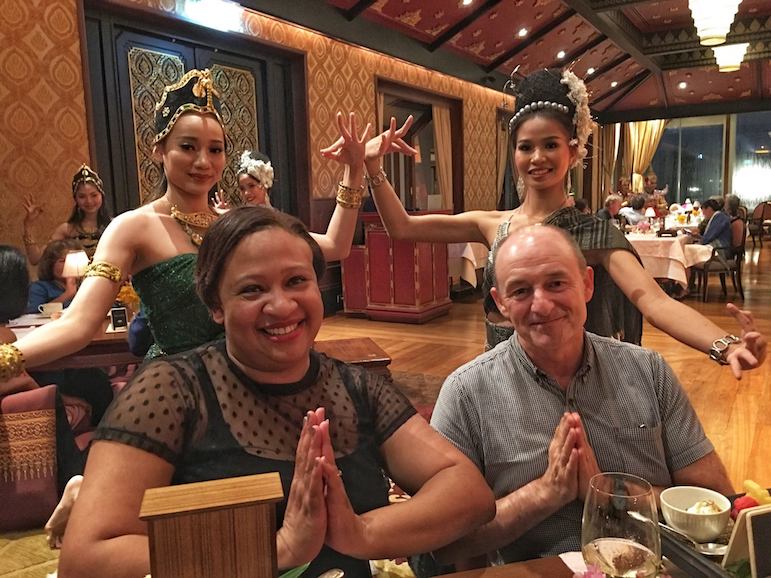 They helped us learn more about Thai culture, as well as discovering one of Abercrombie and Kent’s fantastic philanthropy projects.” ~Terry

Look out for all the stories and more video from this trip and one of our favourite places to visit in the world in January.

“Food lovers rejoice! Galicia’s mouthwatering seafood and amazing Albariño wines mean a trip to this corner of Northern Spain is a must. I have clocked up plenty of miles visiting Spain’s southern shores, but Galicia reveals so much more to Spain than the sun, sea and sand offering of the Costas.

Galicia is famous for a long heritage of fishing, and being blessed with seas rich in fantastic seafood. After a day of sampling Albariñio wine – the Rias Baíxas’ wine region’s main export, we were told we would be cooking a seven-course menu. 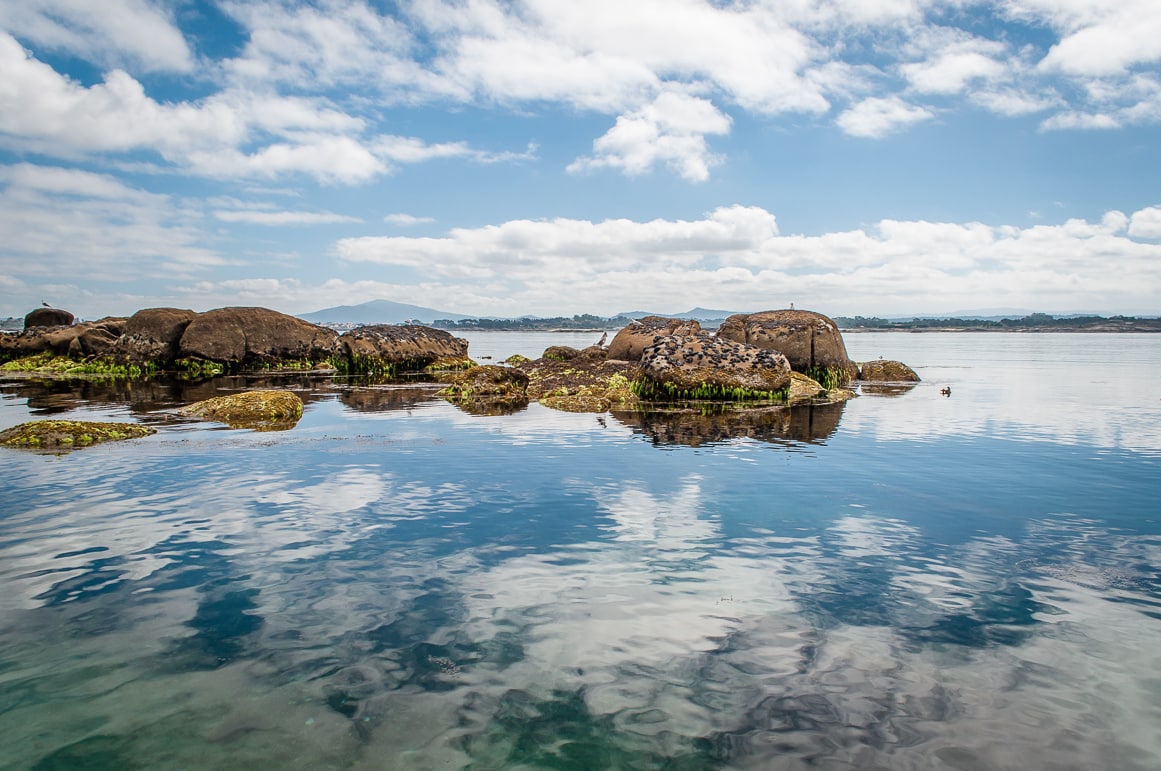 And we were soon emulating Keith Floyd, pairing our dishes with a fabulous white wine. With steam rising and pans clanging, we made light work of the seven courses.

Dining family style, we were soon full but happy, having discovered the delicious taste of the Galician kitchen. 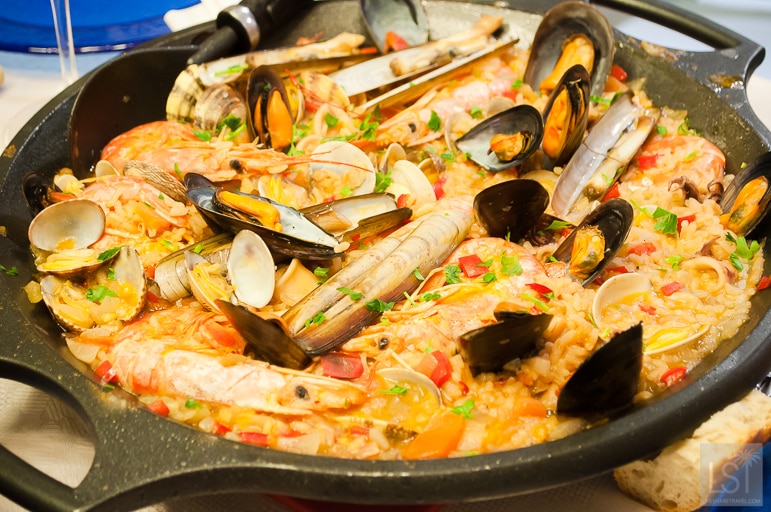 We also learned a number of easy to make Spanish recipes – the best souvenir we could have asked for. As for picking a favourite, that’s a hard one, but the seafood rice is a real classic.” ~Sarah

“Who knew that business travel could also be so fun? I was in Vietnam for a conference, with some leisure activities scheduled in between which opened my eyes to the fact that it’s all about the details when you travel as our recent Instagram feed reveals. 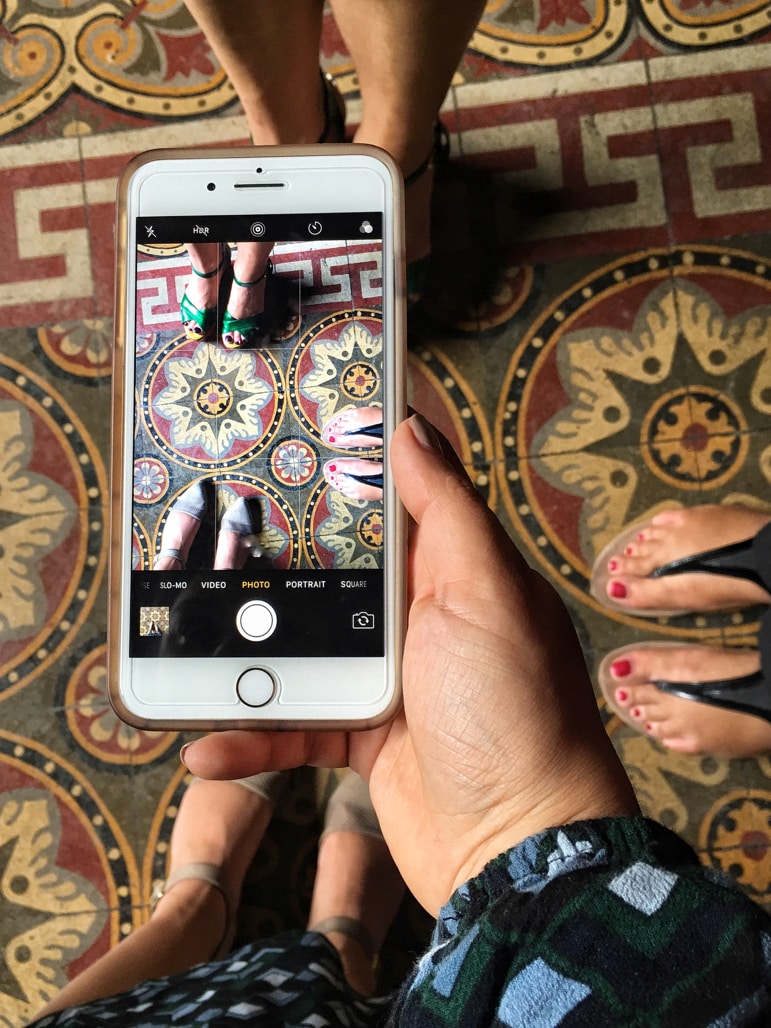 On the temple trail, I easily lost myself and the sense of time in the incredible temples. Chùa Nghĩa An was intense, with flashes of red and gold, while the tiles at Ba Thien Hau Temple are beautifully presented. In Vietnam, from the floor to the walls, there was always something eye-catching to grab my attention. 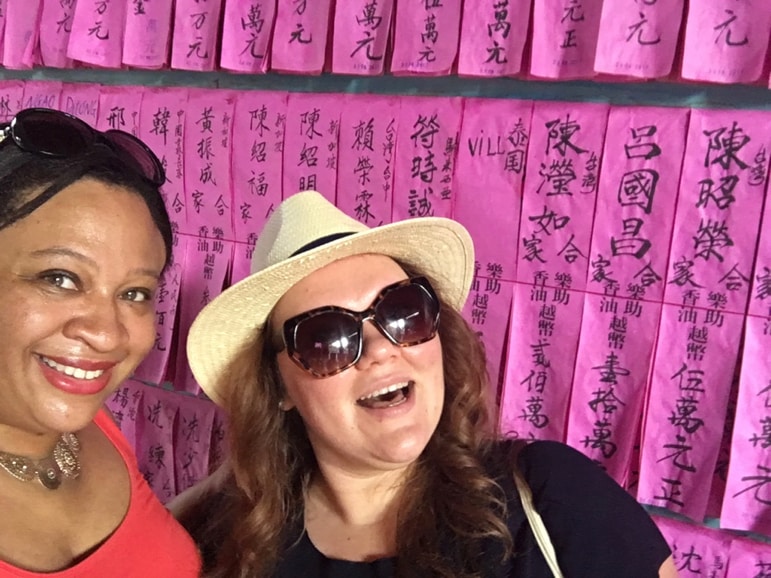 My visit to southeast Asia served as another reminder of the friends you make on your travels. And this time I had the pleasure of meeting up with Instagrammers including my old chum Veera Bianca, Marissa of Darling Escapes, Ida from Adaras, and Christine at Tour de Lust, and more great folk, sharing our experiences as we explored the riot of colour that is Vietnam.

And the whole experience encouraged me to get in front of the camera lens more, and be in the moment, rather than just capturing it.” ~Sarah

Look out for more tales from Vietnam, one of the best places to go in the world, in the New Year

“This is the second entry for Spain, but it’s for a number of very good, and very different reasons.

For the majority of travellers, hiring a car or booking a taxi to explore a region is second nature, but we don’t often give due consideration to other modes of transport.

In October though, I relished the opportunity to board Spain’s AVE high-speed rail network to discover four Spanish cities in just four days. The beauty of the rail network is that in no more than two and a half hours we were in a new city with lots to see.

As travel writers, we don’t usually get to spend much time in one place, but you, dear reader, naturally have the flexibility to slow things down and take each destination in your stride.

We explored Tarragona, Zaragoza, and Madrid, and while they all have their whims and quirks it was our final destination, Seville, which I’ve chosen as my highlight.

The stylish city has its own unique blend of Moorish, Gothic and modern architecture, from the Alcazar Palace to Las Setas. Combine the architecture with the food and its famed nightlife and it’s an assault on the senses in a super cool city.

I loved how easy it was to see so much in one trip, and this is just the tip of the iceberg, as there are many other cities you can add to your trip to create your own unique adventure.” ~Sarah

“I love the fact that our travels take us outside of our typical interests and sometimes our comfort zones. It gives us the chance to learn something new about a place, and it’s these kinds of experiences that prove the most memorable.

That’s exactly what I found when I spent a few days in San Marino for the Moto Grand Prix. The intricacies of the world of motorbiking were never really on my radar. But meeting one man, Aldo Drudi, changed all that. 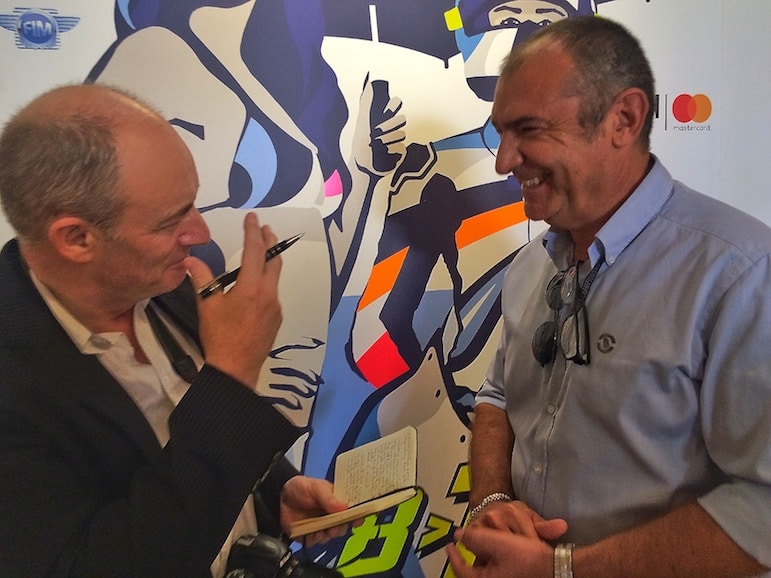 I met Drudi at the Rimini Motor Soul Exhibition celebrating The Rider’s Land – the name given to the tiny nation of San Marino and region of Emilia Romagna in Italy for their shared love of motorsport. Drudi is a creative, visionary and mentor to the stars, designing safety helmets and bikes for the very best in the industry, including Valentino Rossi.

I was riveted listening to how the master craftsman gets his ideas, and his claims that each helmet he creates has a different story.

Attending the race at the packed Misano World Circuit the next day, it occurred to me how sporting events like the MotoGP have a long history of bringing people together, generating excitement and producing memories that will long outlive the occasion.

And I will take all that with me as my lasting memory of my visit to the San Marino MotoGP.” ~Terry

“I hadn’t heard of Saint-Emilion before this trip came up, but just like when you buy a car, now I’m forever hearing about people’s own experiences there, and every so often I seem to stumble across a bottle of red wine from the region.

It’s just a 40-minute drive from one of France’s capitals of wine, Bordeaux. But while Saint-Emilion is also acclaimed for its grapes, I soon discovered that its history is just as noteworthy.

A UNESCO World Heritage Site since 1999, the town has just enough to amaze and delight without feeling overwhelming or giving you a fear of having missed out on something. It’s small enough to take it all in during one trip. 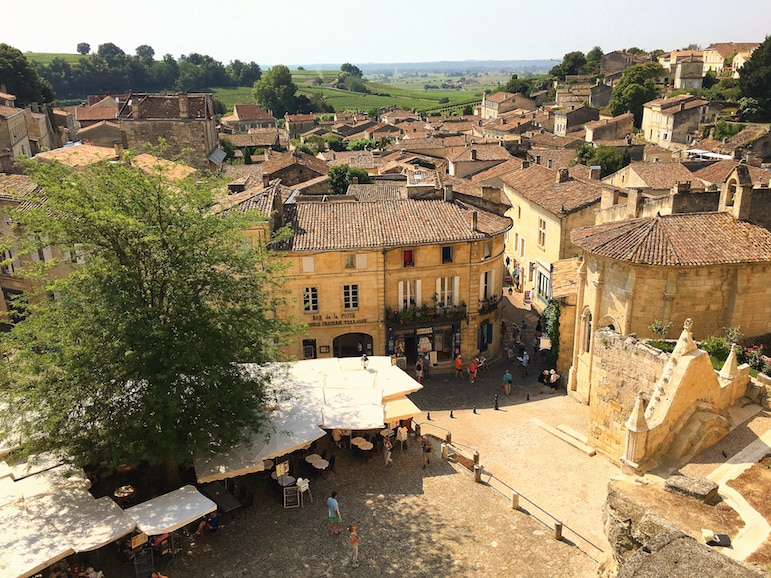 And this is what made my short break so memorable. Whether I was clambering to the top of the King’s Keep for 360-degree panoramas of limestone buildings and emerald green fields, or heading underground to learn about its medieval past and links with the monk, Emilion – my adventures never felt rushed or hectic.

On the contrary, the town has a laid back and relaxed feel – no doubt helped along by the wine, of course! Along its cobblestone streets and squares, are a selection box of winemakers and shops with their own unique range of bottles which you can ship home if luggage space is limited.

So if you’re looking for a short burst of sunshine, with a food and wine adventure thrown in, add Saint-Emilion to your 2018 plans – I know I will.” ~Lorraine

Christmas in Austria – from kaiserschmarrn to the Krampus Run in Innsbruck
18 luxury places to visit: where to go next when you think you’ve seen it all