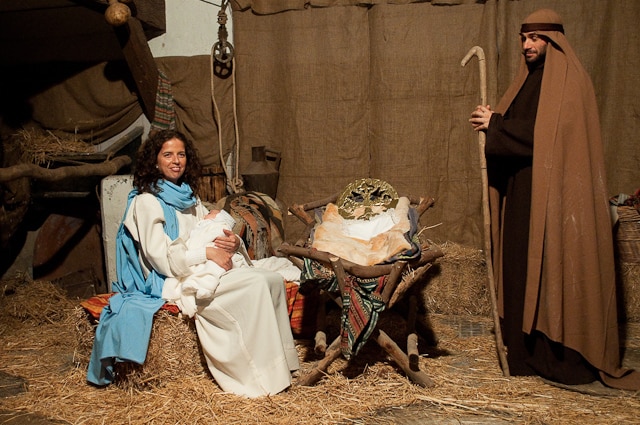 The Christmas story may have begun in the small town of Bethlehem some 2,010 years ago, but it’s brought back to life each Christmas in towns across Spain.

Arcos de la Frontera in Andalucía is renowned for holding the oldest and some say the most traditional Belen Viviente, or Living Nativity, in which townsfolk dress up in biblical costumes to perform the nativity story.

At LiveShareTravel we just love discovering such cultural traditions and so we made an extra special effort to get to our accommodation at Arcos Gardens in time to see this fine festive offering. Despite very heavy rainfall and driving winds, the Living Nativity took place amid the cobbled streets of this hill-top Pueblo Blanco, or white town.

Hundreds of people wandered the circular route stopping at each nativity display or performance set in houses and business premises among the steep alleyways. Bright orange glows flooded dark alleys as open doors recreated the scene in Bethlehem on the day Jesus was born, from local trades people like the carpenter and potter’s using what looked like ancient equipment to telling all aspects of the nativity story.

Some scenes were slightly difficult to fathom, but each looked wonderful. There was the visitation, the Hebrew wedding, the census takers and more. In a deep-set room King Herod was entertained by a harem of dancing girls, while he enjoyed a lavish feast. Further on the Three Wise Men, or Three Kings, sat imperiously surveying the Plaza del Cabildo, as wide-eyed children looked on excitedly.

Suddenly before us were a legion of Roman soldiers, well, seven to be precise, but still incredibly impressive as they marched in formation, dominating the street scene. In their white tunics and red robes and carrying large spears they evoked a respect and authority of which their biblical heirs would have been proud.

Turning another corner we stumbled upon the stable setting revealing the baby Jesus – yes, a real baby – folded gently into the warmth of his mother’s arms, as ‘Joseph’ looked proudly on, the scene completed by a donkey munching its way through some hay.

Completing the Living Nativity route we refueled with tapas and a warming glass of red wine, the spirit of Christmas burning brightly across Arcos de la Frontera and the joyous faces of the townsfolk.