Christmas in Salzburg is one of the best times to be in the city, it is after all, renowned as one of Austria’s best towns for Christmas markets. This is part two of our visit to Salzburg and the surrounding region for a pre-Christmas trip. Read part one about St Wolfgang, or about Christmas in Vienna.

This was our third visit to Salzburg, and later that day we took our travel pal Katrina of Tour Absurd, a Sound of Music fan, to the Mirabell Gardens to show her some locations from the film.

We also visited the first of our Salzburg Christmas markets, stopping at the small Mirabellplatz Christkindlemarkt before going back across the river to the old town to Salzburg’s largest market in the neighbouring squares of Residenzplatz and Domplatz. As the blue sky day turned to deepening twilight shades the market became ever more magical. 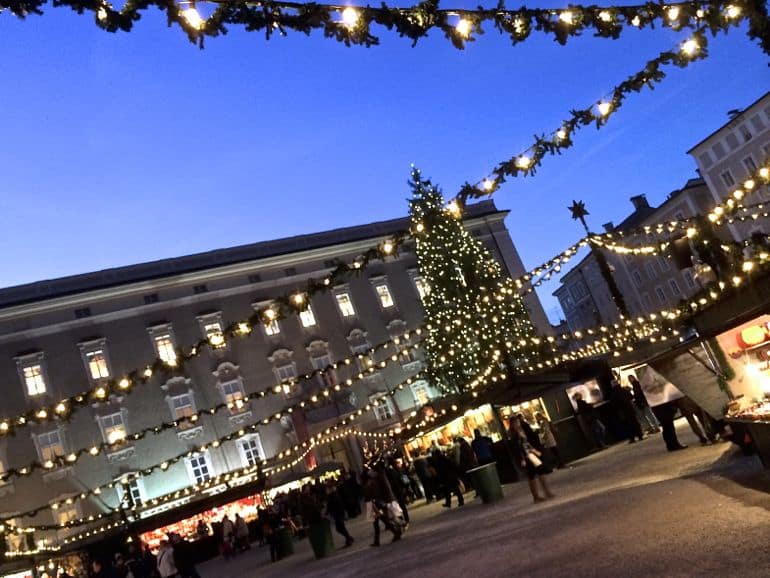 Markets and magic of Christmas in Salzburg

We picked up gifts – baubles (such as a rather kitsch one of Salzburg’s most famous son, Mozart), ceramics, gingerbread and more while enjoying yet more gluhwein, but also other hot alcohol-based drinks like White Russians and Mozarts – there he is again – served with chocolate balls of the same name.

That night we skipped the city centre for Salzburg’s Volksgarten. Christmas in Salzburg features one of its popular festivals, Winterfest which showcases a number of the world’s best circus acts.

We were there to see 7 Fingers, a Canadian circus troupe, performing Sequence 8 a contemporary circus act of more than just incredible feats. It also offered an intimate look at human emotional life. But most of all we were wowed by 7 Fingers’ acrobatic feats.

We wouldn’t ordinarily consider going to see a show of this nature but the troupe pulled off such spectacular stunts that we were left wide-eyed and clapped till our hands hurt.

Sadly we couldn’t take photos of the show but the video below highlights the airborne flips, pikes, twists and splits to offer a feel of the show. If you’re in Salzburg before January, vow to see it.

Returning to our hotel, the Blaue Gans in Salzburg’s old town, we were ready for a rest after a day of much excitement.

The Blaue Gans, or Blue Goose, is in a great location for Christmas in Salzburg as it’s in the very heart of town, close to the main markets. A cool, art-focused, boutique hotel it has modern, bright and spacious rooms, a wine cellar with 1,500 wines, art collection and restaurant.

It was great to be so well situated in the city, the staff were excellent and we enjoyed the cute side features like various witticisms on the walls and the blue duck in our bathroom which we were told was there to be taken home.

Our only criticism would be that the service at breakfast was not as good as it could be. On the second morning of our stay the service was slow, the poached eggs very vinegary and the bacon I ordered with my eggs, a very paltry serving of two tiny, over crisp streaky bacon rashers. 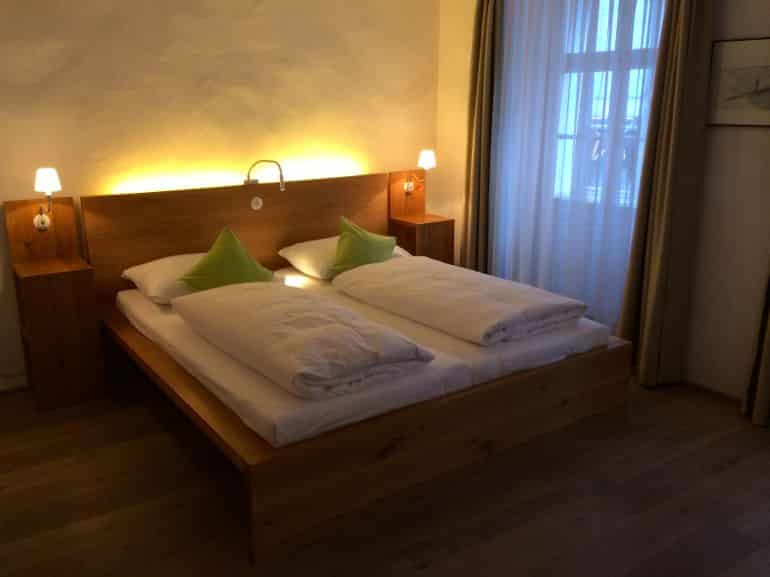 This was our third visit to the city and Katrina’s first, but during our time spent at Christmas in Salzburg we went on a walking tour with guide Martina Gyuroka. She based her tour on the things we found most interesting – giving us the history of Mozart’s birthplace, locations for The Sound of Music, and other historic sites like Salzburg’s beautiful cathedral.

In keeping with the spirit of Christmas in Salzburg we also went to the home of Joseph Mohr, who wrote the words to the carol Silent Night. It was no more than looking at the plaque on the wall, and hearing the history of the popular song, but it added a special touch to our Christmas in Salzburg. 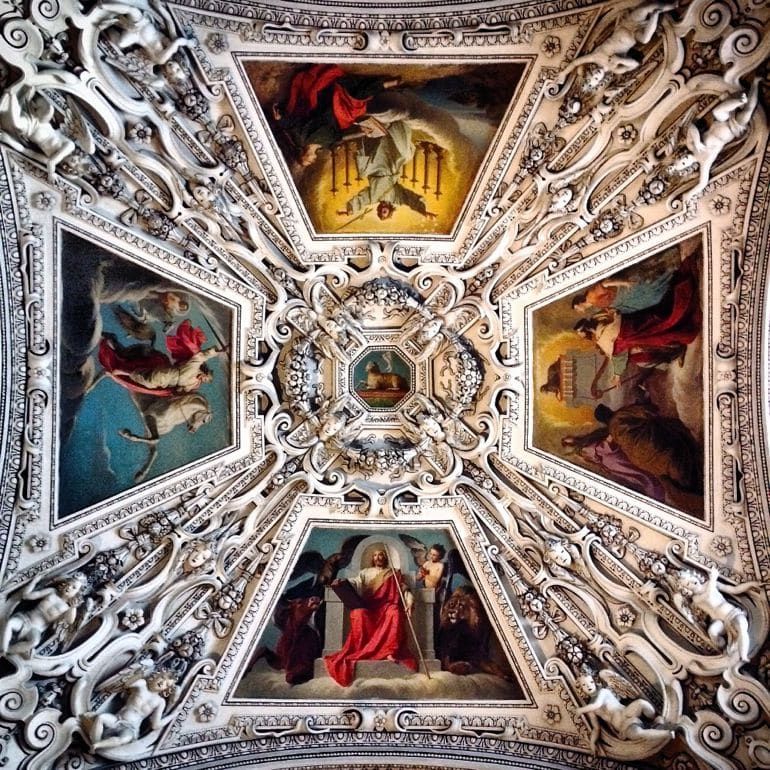 Stopping for lunch, we headed to Stiftskeller St Peter, an 800-year-old restaurant which really goes to town at Christmas.

Festive fare at Christmas in Salzburg

Stiftskeller St Peter has long been a restaurant of note in the city, but it has to be one of the most popular venues at Christmas in Salzburg because it hosts Mozart concert dinners and has private dining rooms bedecked with Christmas decorations. 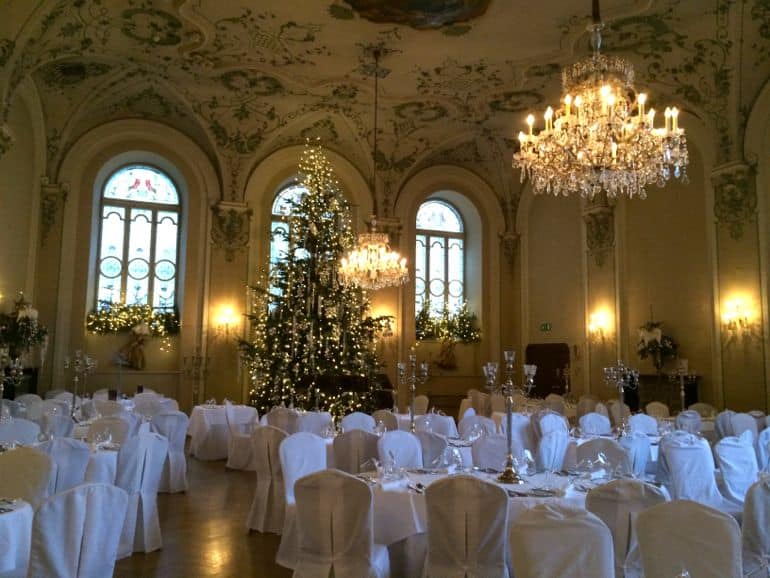 If you like fine food amid a frenzy of decorations, and who wouldn’t at this time of year – then Stiftskeller St Peter is a perfect place for a festive meal. I loved my starter of cinnamon smoked wild salmon, white catfish and beetroot carpaccio, followed by fillet of suckling pig with parsley and walnut risotto.

But we did make a mistake with dessert. It wasn’t that it wasn’t delicious, but the surprise dessert we ordered was more of an over-sized shock. We had Salzburger nockerl – a large sweet soufflé, already enough for the three of us, but then there were chocolate cakes with a side of sauce, apple strudel, cream cheese strudel, ice creams, fruit cocktails, and more. It was enormous!

Luckily we had more Christmas markets to explore that afternoon so were able to walk off a few of the calories at Schloss Hellbrunn, one of Salzburg’s most famous palaces. 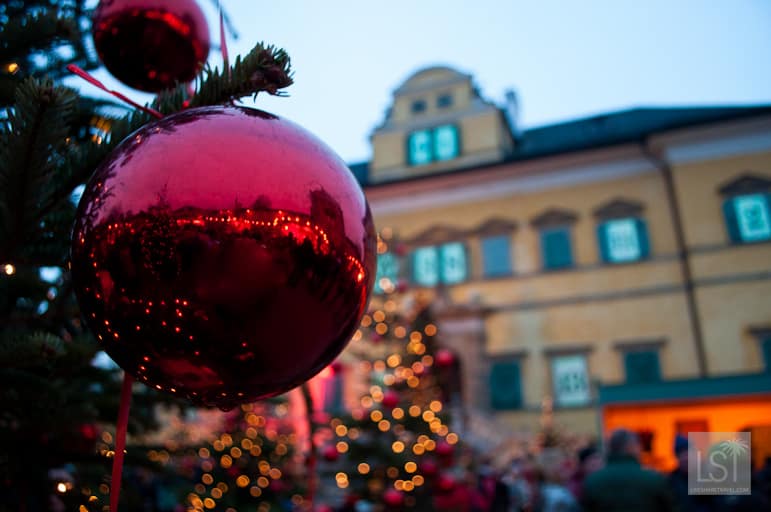 Beneath the glow of thousands of Christmas lights and amid hundreds of trees with red baubles we wandered, picking up everything from smoked fish to jewellery. I loved every Christmas market we visited in Austria, but Hellbrunn’s was truly magical.

And we learned something about Christmas in Salzburg, in Austria even – that wherever you go, be it a city centre, lakeside town, or the grounds of a palace it’s overflowing with Christmas spirit.

Find out more about Salzburg. See the city differently with a guided beer tour.

Read part one St Wolfgang – the most Christmassy town in Austria and Christmas in Vienna: a capital idea.

St Wolfgang, the most Christmassy town in Austria
Traditional Christmas in the heart of Spain