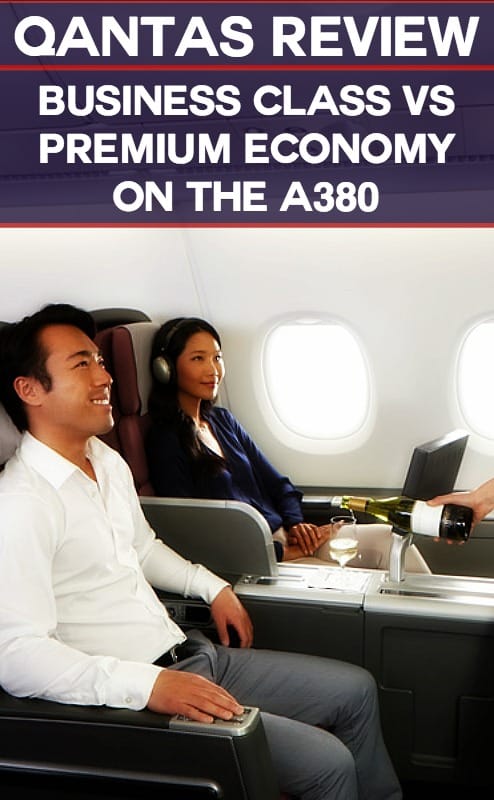 When I flew to Melbourne for my Australia road trip I knew flying Qantas premium economy A380 made sense.

Faced with a journey of almost 17,000 km and some 22 hours in the air, it was time to think about comfort, and I thought of Qantas premium economy on board their A380 aircraft.  Surely, the world’s biggest passenger aeroplane the Airbus A380 model would give me the maximum space and comfort for such a long flight.

Let’s start with some history to explain – did you know it once took twelve and a half days to fly from Australia to London? It was known as the Kangaroo Route because of the number of stops along the way before the plane bounced onwards.

Even now it’s easy to underestimate how far Australia is from Europe. Someone recently asked me if Melbourne was just 14 hours from London – undercutting the flight time by eight hours.

Yes, it takes an average of 22 hours to travel to Melbourne from London – pretty much a whole day in the sky! So comfort is key.

But as Qantas has four cabin classes – economy, premium economy, business and first – from London to Melbourne, via Dubai, I tried Qantas business class one way and the return journey was in their premium economy section. Now I could review and compare them both.

Qantas is one of many airlines flying to Australia from London, and it isn’t always the lowest price available, but there are many qualities that make flying with Qantas a better choice.

Its flight schedule is convenient as it operates a one-stop service (via either Dubai or Singapore). It has a code-share with Emirates meaning if Qantas’ flight times don’t suit on one leg of your journey, perhaps Emirates’ will, giving you more choice.

Qantas flies Airbus A380s to Melbourne allowing for more room and comfort than with airlines flying smaller jets for example.

Every company is built on the quality of its staff and this is where Qantas excels. All the crew on my flights (four of them as there’s a change in the crew in Dubai) were extremely friendly and helpful in business class as well as premium economy. I had a long chat with a few of them, getting their tips for things to do in Melbourne, talking about their working life (doesn’t everyone want to know what it’s like to be a flight attendant) and having fun with them. They judge their interactions with you perfectly – talking when you want to talk, and allowing you space if you want a quiet flight.

The airline is also in the oneworld alliance, which means if you are a member of British Airways Executive Club, American Airlines’ AAdvantage or any of the other member programmes, you can collect miles and use membership benefits while flying with Qantas.

Premium economy on Qantas’ A380

The A380 is perhaps the world’s most popular plane through a combination of quality of the customer experience, the fact that everyone wants to fly on the biggest plane in the world, and good marketing.

Qantas’ wide-bodied, double-decker has first and economy cabins downstairs, five rows of economy class on the upper deck at the back of the plane – mostly reserved for Qantas’ flight programme members, 35 premium economy seats, and 64 lie-flat business class seats. 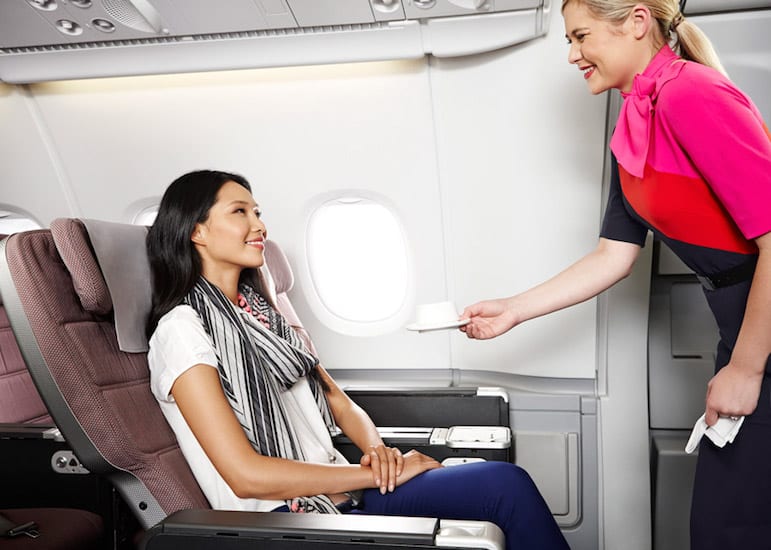 Premium economy Qantas seats have a pitch of up to 42 inches and 19.5 inches wide, a leg-rest that raises up as you recline and fold out footrest.

As you would expect, the seats recline further than in economy. The only problem I found was that they could be difficult to bring back to a seated position and many passengers needed assistance to get them fully upright.

The extra leg room a great benefit on the long flight, the cabin quiet as it’s sectioned off from economy and business class.

We started the flight with a glass of sparkling wine, well, two or three if I’m honest. The meals service saw our tray tables covered in small tablecloths before trays with our meals were placed on top.

Although there were menus, I already knew what I was having as I’d used the airline’s recently introduced Select on Q-Eat – part of the online check-in area to make my choices. And every dish was delicious. It’s no great surprise given that the premium meals are inspired by leading Australian restaurateur Neil Perry’s Rockpool (a restaurant we later visited before starting our road trip to the Great Ocean Road from Melbourne and into the Grampians National Park). 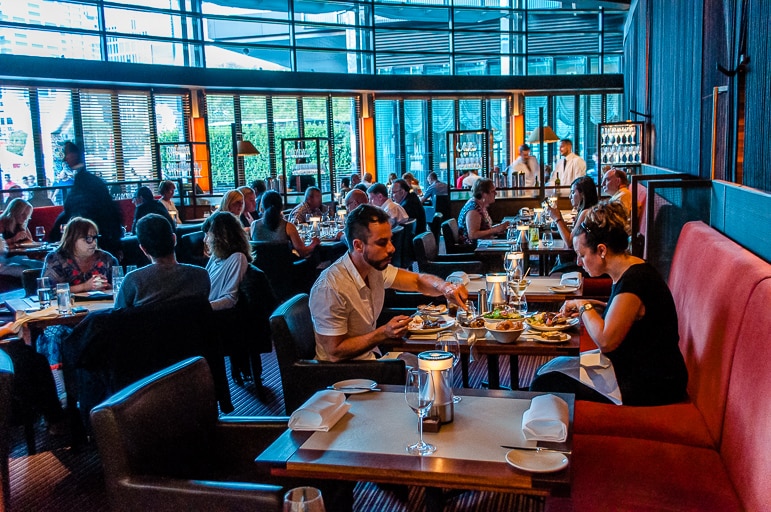 Many of the flavours and wines featured in the menus of Qantas’ premium economy A380 flights are those you’ll find served up at restaurants across Victoria so it’s a good way to prep your taste buds for what’s to come.

Other benefits of Qantas’ premium economy? Some of these are small but could make a difference to you – there’s priority check-in and priority boarding, noise cancelling headphones for the in-flight entertainment (I keep these on while sleeping to reduce cabin noise), in-seat power (which is great if you are like me and often work on planes), an amenity pack (including eye-mask, socks, toothbrush and toothpaste), and priority disembarkation.

Qantas business class on the A380

Heading home from a trip is always a little sad. But travelling in business class eases post-trip blues just a little. And Qantas business class was a perfect example of how it can help you maintain a relaxed smile. This started in the lounge at Melbourne Airport where we relaxed away from the bustle of the terminal. 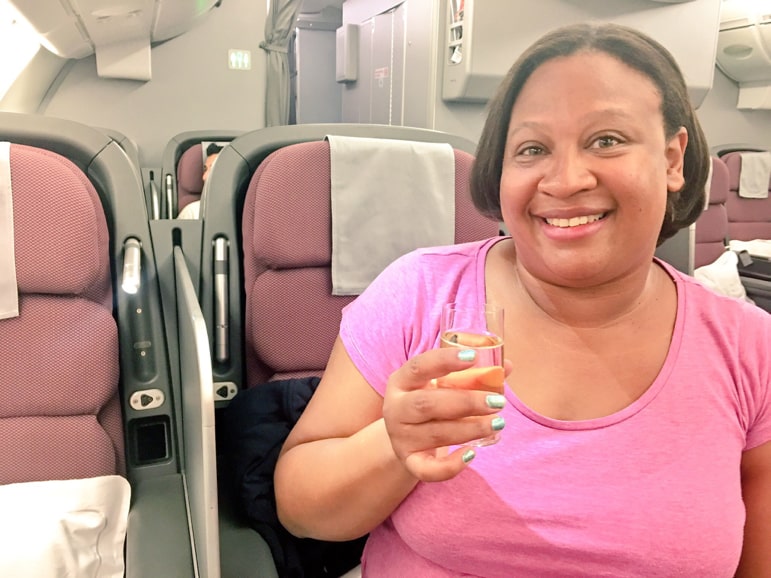 Business class is a whole other level of comfort. Truly I think this should be the standard way to travel on all long-haul flights, but it would be far too expensive for airlines.

Qantas has a seat pitch of 78 inches, a width of 21.5 inches in business class, and the seats become lie-flat beds, allowing for a whole 180-degrees of sleep-filled relaxation.

But really the key to business class is in the service. Meals are served restaurant style, with each individual course delivered onto your cloth-covered tray table.

Business class dining is not just “inspired” by Rockpool, but the recipes have been specifically crafted by Qantas food consultant Neil Perry and his culinary team. I enjoyed salmon rillettes with sourdough crostini and pickles, then Persian chicken fesenjan with walnuts, pomegranate, green beans and rice pilaf, and dessert of vanilla and orange blossom cream with melon. This was accompanied by a Victorian wine, a wild ferment chardonnay, Ladies Who Shoot Their Lunch.

See more of the food in Qantas’ business class…

The salmon was fresh and zesty, the chicken lightly spiced and tender. Flavour-filled and well prepared, it’s certainly not what you’ve come to expect from dining at 39,000 feet. 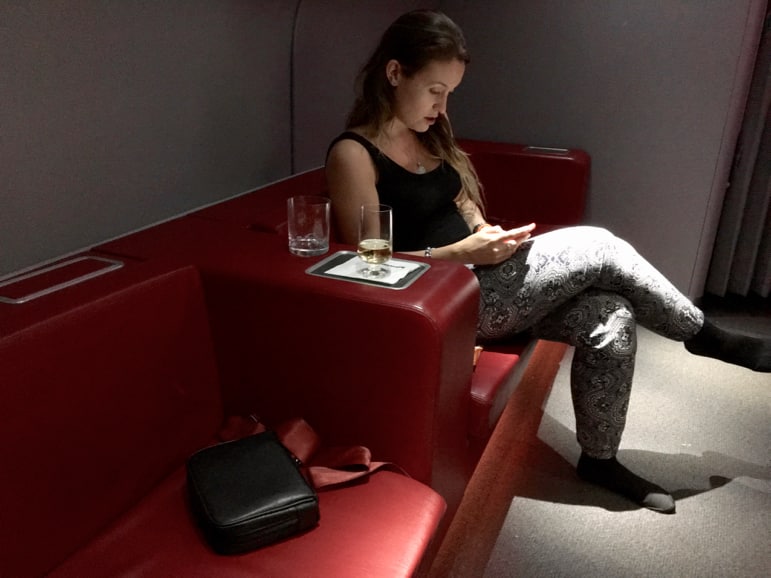 Qantas business class comes with a few extras such as a lounge at the front of the A380 where you can meet friends and help yourself to drinks. It’s not an exciting area and is quite underused as a result, it’s probably where other airlines have made more innovative use of the A380’s extra space, but it does offer an excuse to stretch your legs. 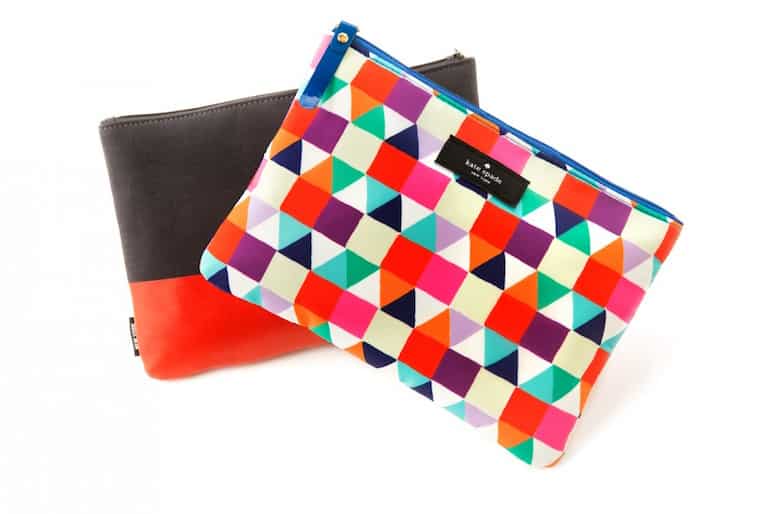 As we relaxed into the flight, the attendants made up our lie-flat beds with padded mattresses, plump pillows and a duvet, so we could ease ourselves into sleep. It didn’t take me long to succumb to sleep and I floated most of the way back home.

Qantas A380 review – are cabin upgrades worth the spend?

Qantas delivers service in the air, and on what is pretty much a whole day journey, this is very important. The crew is excellent and the friendliest I’ve met – no exaggeration.

Is it worth the extra spend? This depends on your budget and how much you can personally endure on a flight. But with that much time in the air comfort is terribly important. Premium economy offers more space and a peaceful experience, but I would rather spend a bit more and fly in Qantas business class in lie-flat heaven.

Then again, as I’m getting used to high levels of comfort and service I say, “next stop, first class”. 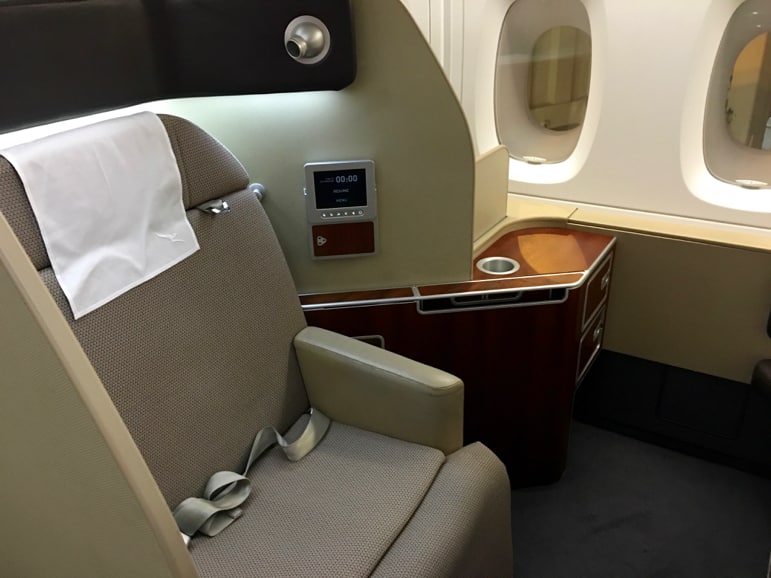 Qantas isn’t the only airline flying from London to Melbourne – you could also consider Royal Brunei Airlines – read our review here.

Best beaches and luxury beach clubs in Tenerife for soaking up the sun
Into the blue: the best Menorca beaches and their secret past