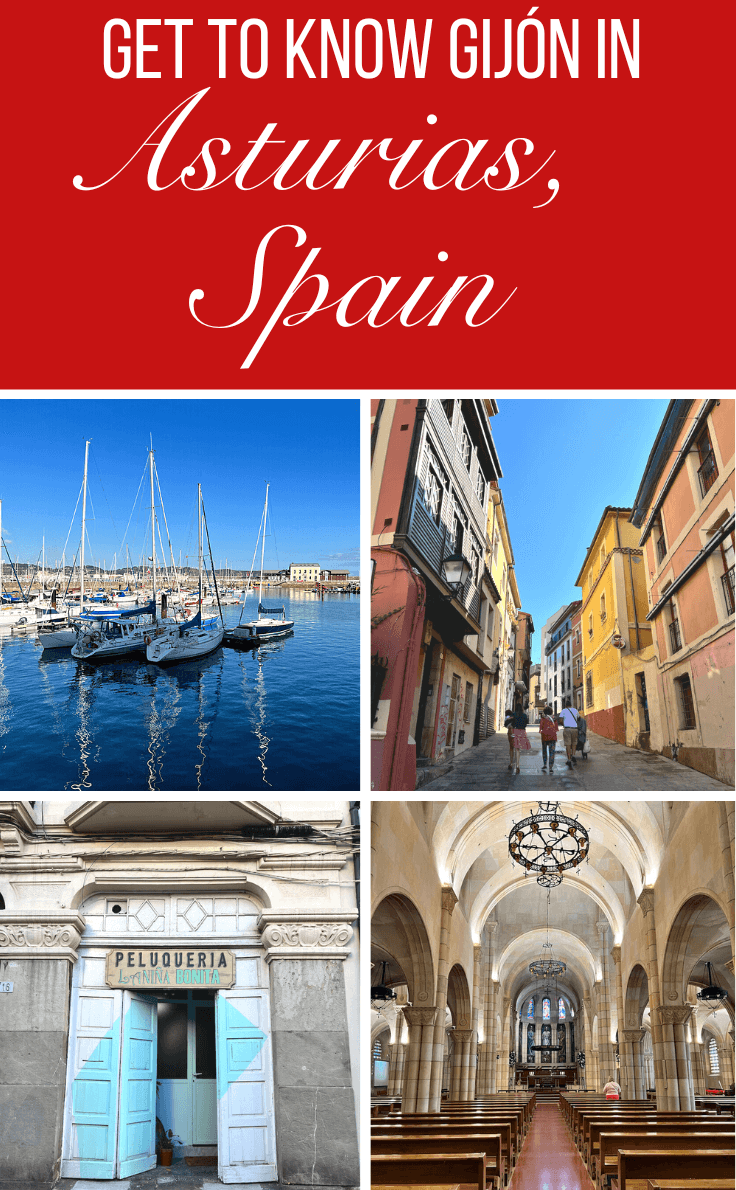 While Spain’s reign as one of the most popular countries for UK travellers is undisputed, there are still a relatively small number of travellers that head to its northern regions. And yet, they hold so much that we all love, from spectacular coastlines to fascinating culture that, like an ever-evolving story, unfolds, wends and winds from the Gaelic influences of Galicia and Asturias to the distinct characteristics of Basque Country, then on to Catalonia, and south and you’ll find yourself immersed in Spain’s Moorish past once more in Zaragoza. Then there are Spain’s Northern cities – the famed like San Sebastian and Bilbao deserve their moment in the spotlight, but I recently discovered four of the best Spanish cities to add to the list of places I’d return to in the north. In this guide, I’d like to introduce you to the lesser-known cities of Gijón and Oviedo in Asturias.

Part of the beauty of Northern Spain is that its shores are pretty close and accessible to us in the UK. And with many of us with our minds firmly on more sustainable ways to travel these days, the options to Spain’s northern cities are good, plus when you arrive, the country’s extensive rail network will have you at the city of your choice in no time.

I’ve travelled by train in Spain before – exploring the cities of Tarragona, Zaragoza, Madrid and Seville on its high-speed AVE service. It is not only fast – the longest journey of that trip, from Madrid to Seville is around 530 kilometres, took around two-and-a-half hours by train – but it’s also very comfortable, efficient with features like Wi-Fi and tables with charging points for devices, and very affordable. Coming from England, I’m always impressed at how affordable trains are in other countries, and this journey can cost as little as €24 per person, if booked in advance. 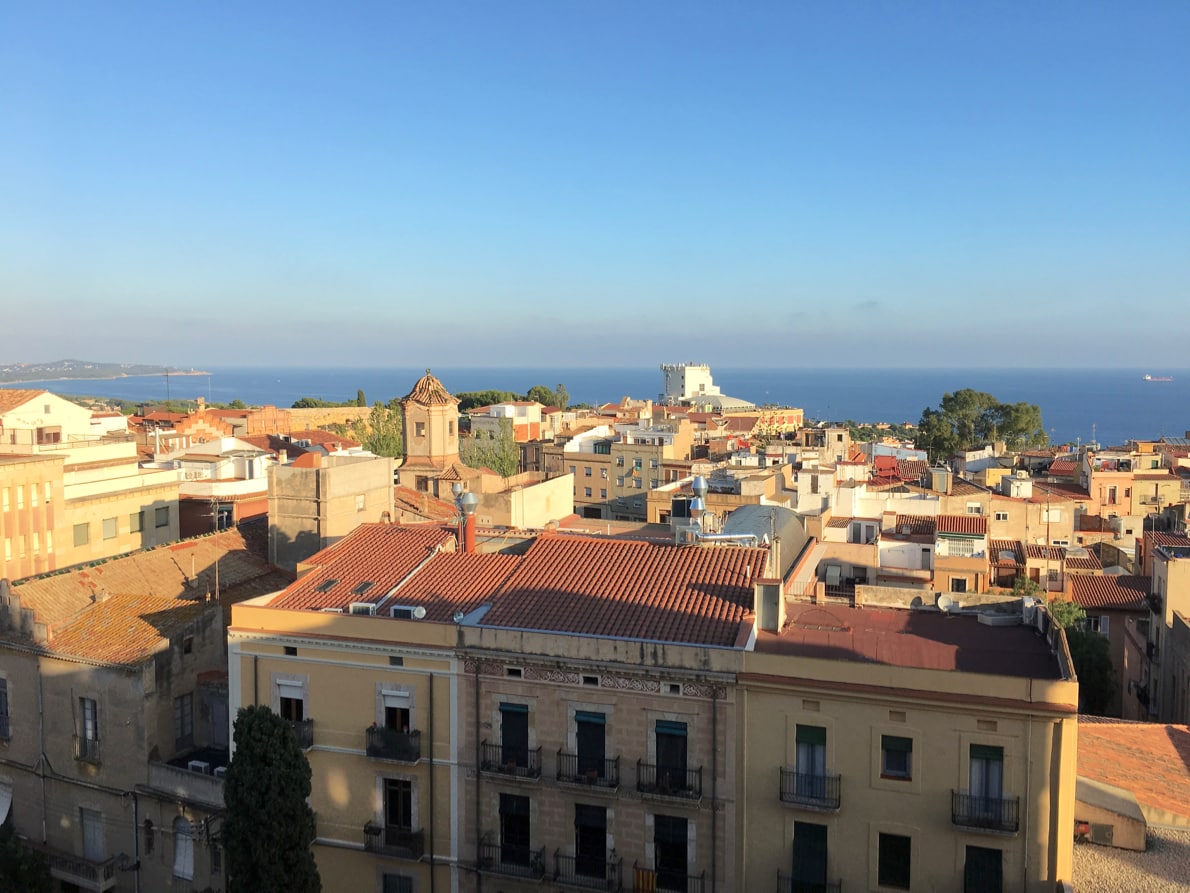 How to get to Asturias

Far and away the most sustainable way to travel to Asturias, in Northern Spain, from the UK is by ferry. You can sail from Portsmouth or Plymouth – the journey is slightly shorter via Portsmouth, at about 28 hours with Brittany Ferries. These are car ferries, so you would have the option to take your own car if you wished, however you can also board as a foot passenger. Arriving into Santander, you will find easy connections from the port by train to other cities in the north but this is where it can actually be quicker to travel by road –  a bus to Gijón in Asturias for example is four hours, while the train can take six hours and 40 minutes. There are also ferries from Rosslaire in Ireland. 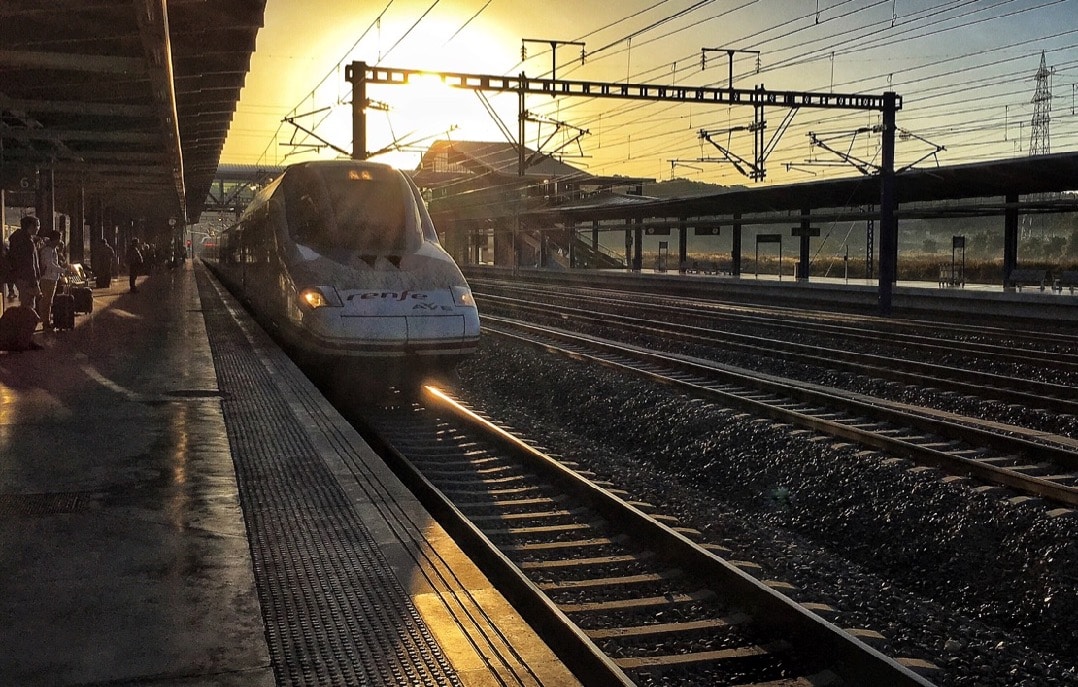 Alternatively, you can fly into Asturias airport from London Gatwick with British Airways/Iberia or Vueling; or from Stanstead with Ryanair. Formerly known as Oviedo Airport, you’ll actually find that your flight lands closer to another of Asturias’ cities, Aviles, about 30 minutes away from Oviedo by road. It’s worth taking some time to explore here if you have the time, as it has a lovely old town as well as some very modern sides to the city, in the architectural creation of the Oscar Niemeyer International Cultural Centre. 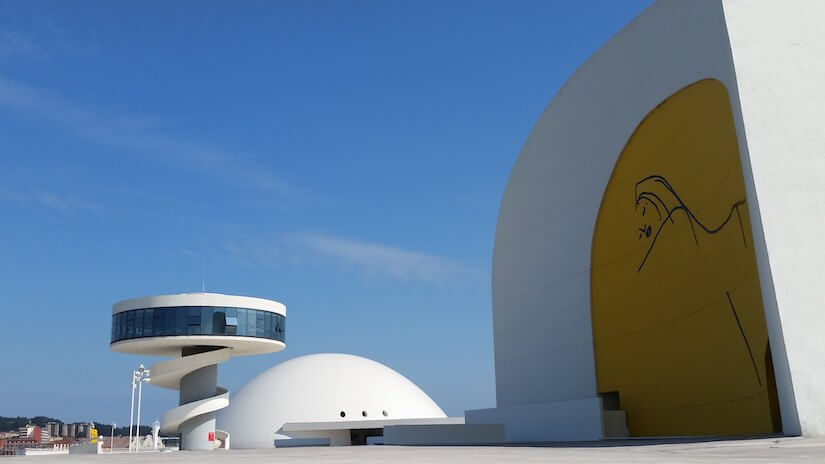 Cities to see by train in Northern Spain

There are so many great cities to visit in Spain, it’s more a question of which city wouldn’t you put on your list than which you should. But even then, I’d struggle with that task as I always find so much that’s good about travel to Spain – from the excellent food to wine regions bursting with flavour and spectacular views, many of them close enough to a city to allow for a day trip. And then each city has its own character that demands you visit. However, on my most recent trip to Northern Spain, I visited Gijón, Oviedo, León and Valladolid – do take a look at our many other stories on Spain and its cities though. 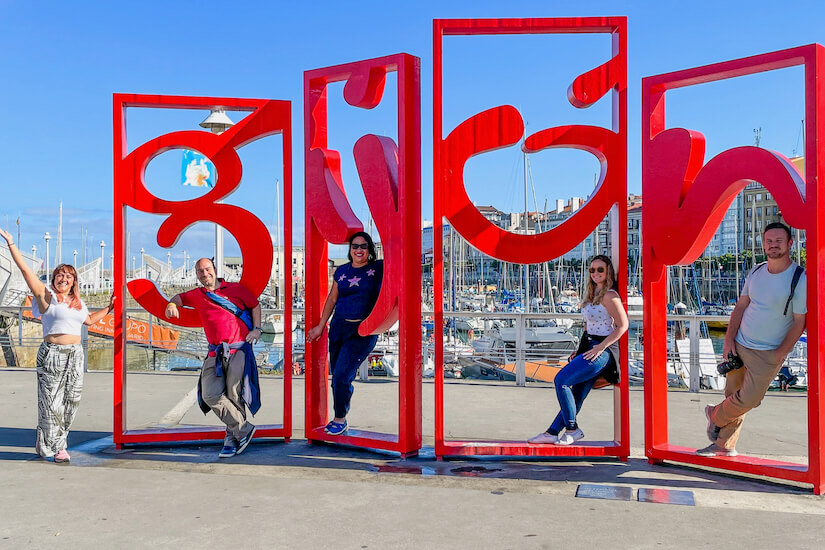 Don’t go to Gijón to wow your friends when you say you’ve been to a Spanish city they may not have heard of before – though that is the likely outcome when you talk about this lesser-known, but very cultural city.

However, the reason you must go to Gijón is for a lovely immersion into Asturian culture and a chance to view a post-modernist city in a traditionally North European “green” coastal setting. Gijón sits on a curved bay looking out onto the Bay of Biscay. 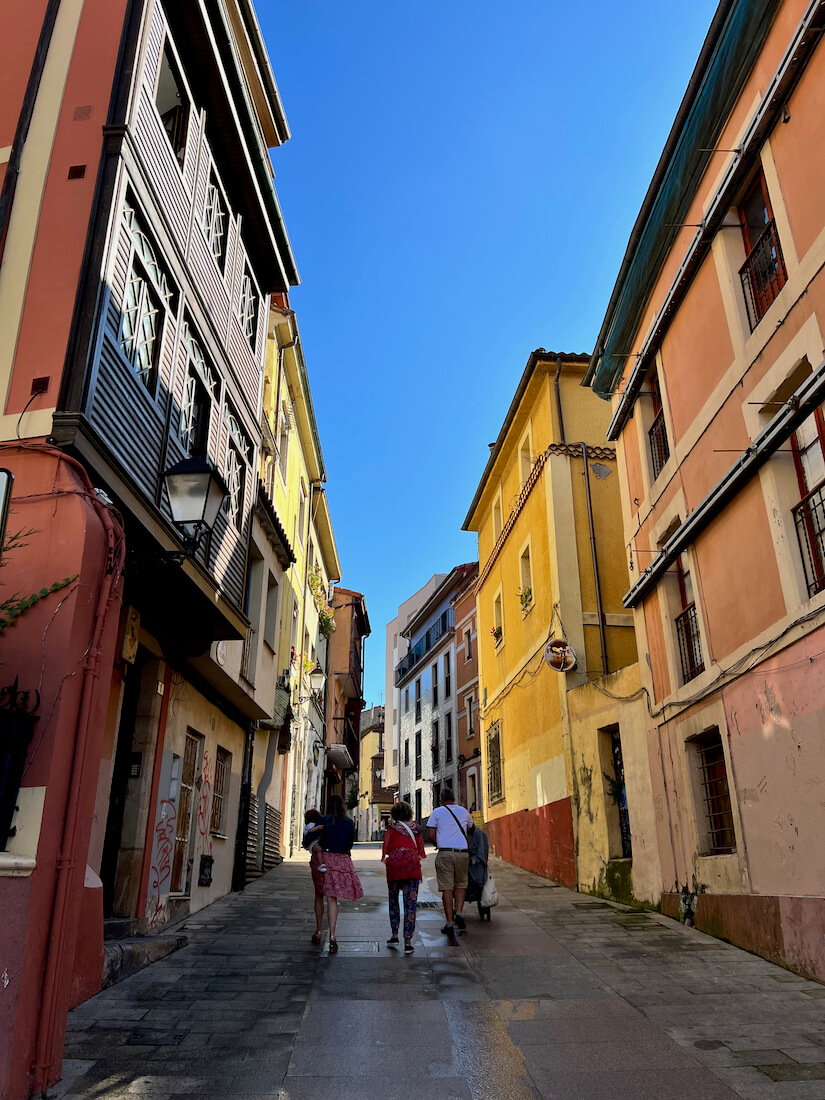 I hadn’t heard of Gijón before I visited but was really pleasantly surprised, first by the Art Nouveau architecture of its city centre and then by its food – traditional Asturian fare – from stewy bean-laden fabadas to cider, or sidra as it’s known locally – poured in dramatic style from on high to aerate the liquid as it hits the glass.

The largest city in Asturias, Gijón, is still small enough to be very walkable. And my feet took me to the following places, that I would also recommend you visit.

Look up at Art Nouveau Gijón 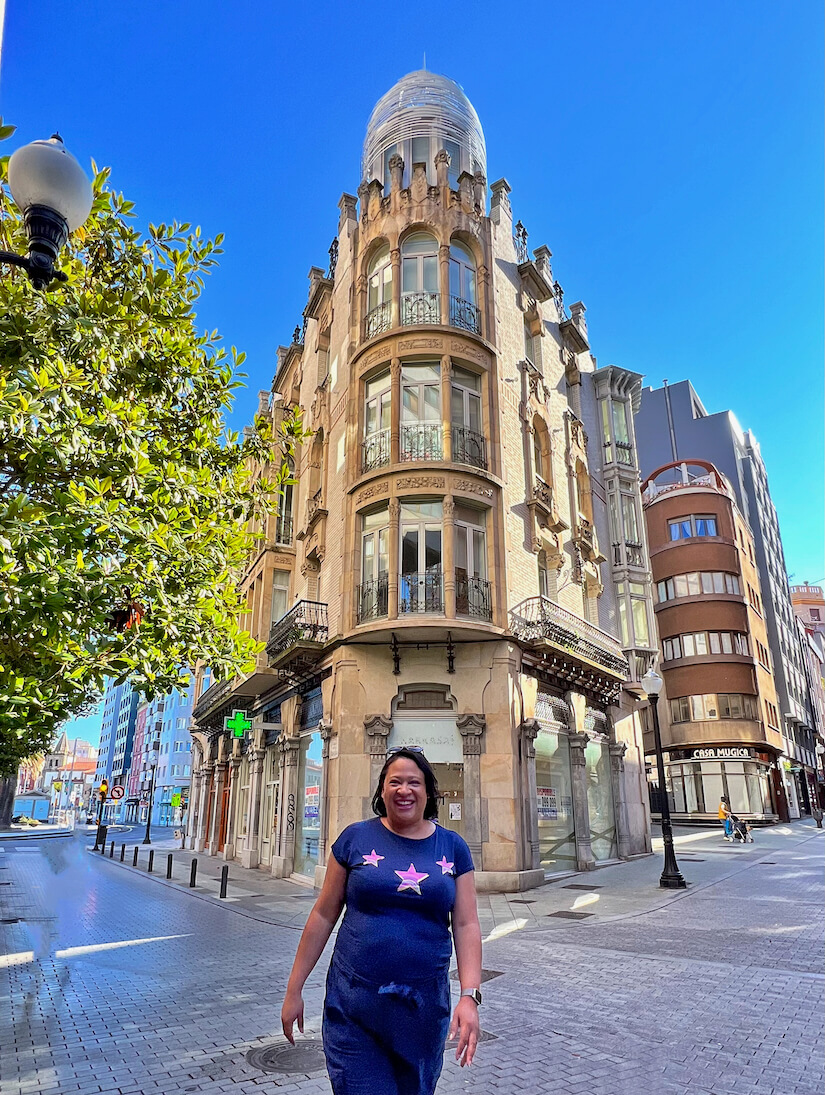 Start by taking a walk through the city’s historic centre and you’ll no doubt be surprised by the fabulous architectural styles and details you will find in its buildings.

With Gijón’s El Musel Port doing rapid trade with the rest of the world in the 19th century, it became something of a boom town and its wealth is visible in the lovely details of its townhouses both on the outside and within with interiors – the inside of Jovellanos Theatre being of particular note. But all over the city centre you will come across doors, windows, domed roofs and frontages that speak of the Art Nouveau era. 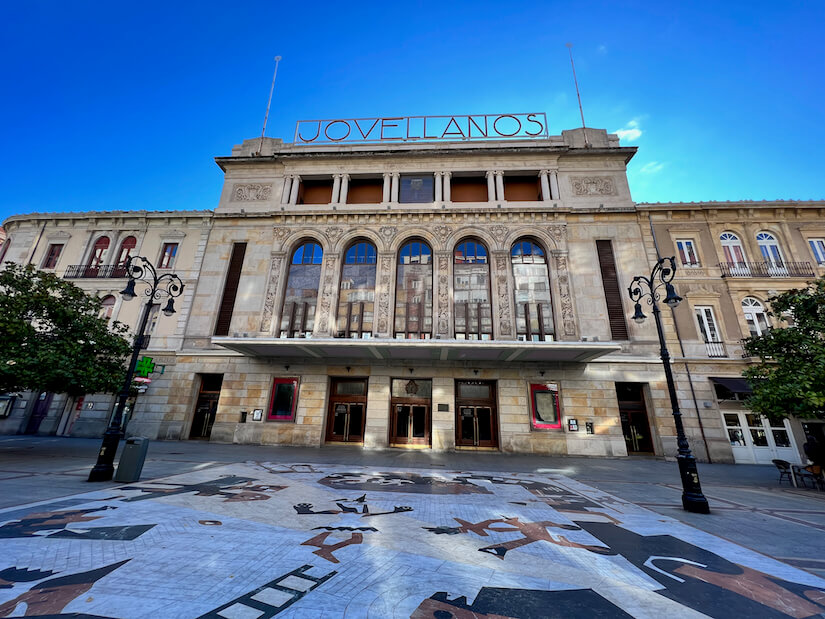 Dip into the Roman Baths

To be very clear, you won’t be warming yourself on a tepidarium here, but Gijón’s Roman Baths do give you a chance to dip a toe into the city’s deep history and discover more about the Ancient Roman art of bathing. 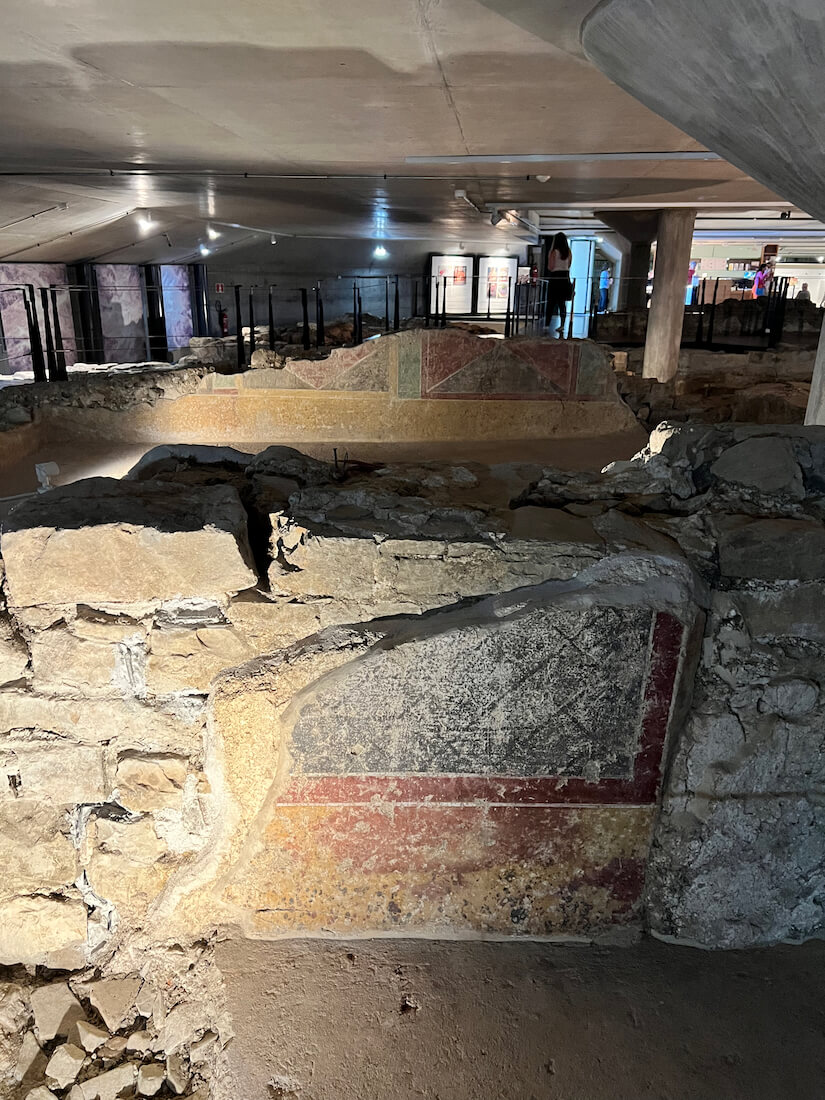 Adjacent to San Pedro Church, it is an archaeological site where you can wander its platforms and discover many historic artefacts a metre or so below, which date back as far as the 1st century. There are some impressive details including mosaics and pots. Beware, there’s even some human remains in the outer reaches of the site, which was converted into a museum in 1995.

Whilst you are in this area pop into San Pedro Church to take a look around at its statues and the impressive mosaics that line its walls. 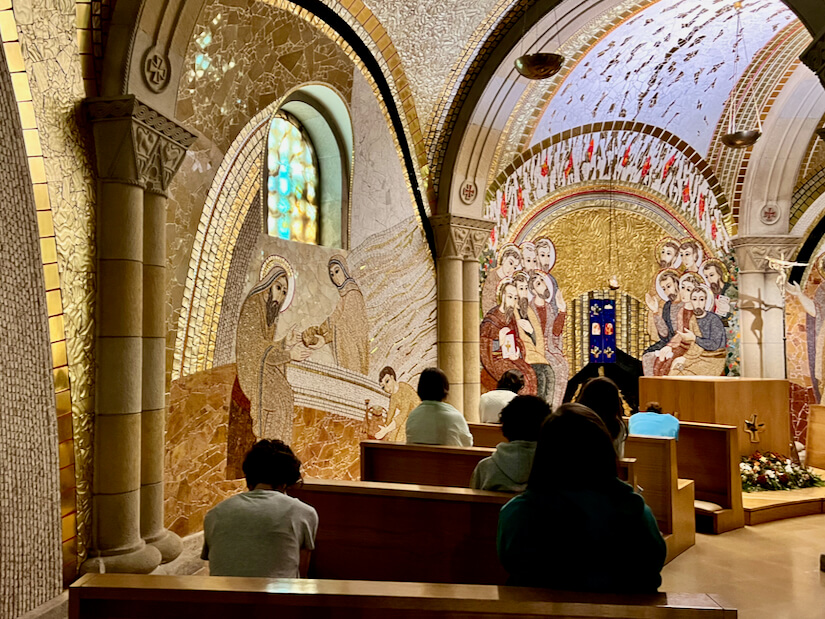 Wander around the headland from San Pedro Church and you’ll find yourself amid the green landscape of Parque del Cerro Santa Catalina. 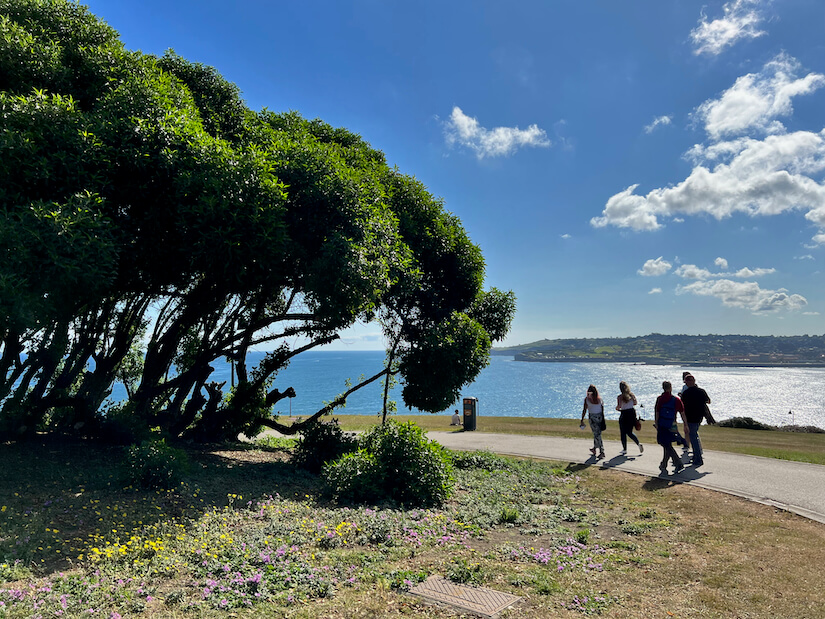 While it’s scattered with the remnants of ancient fortifications, the main attraction in the park is the Elogio del Horizonte sculpture. Created by sculptor, Eduardo Chillida in 1990, ‘In Praise of the Horizon’ as it’s known in English sits on a buff overlooking the Atlantic. It did remind me a little of some of the brutalism found in post-war architecture in many European cities. But this concrete monument has become a symbol of Gijón, and if you stand within the embrace of its towering arms you can hear an amplification of the sound of waves crashing in the sea below. 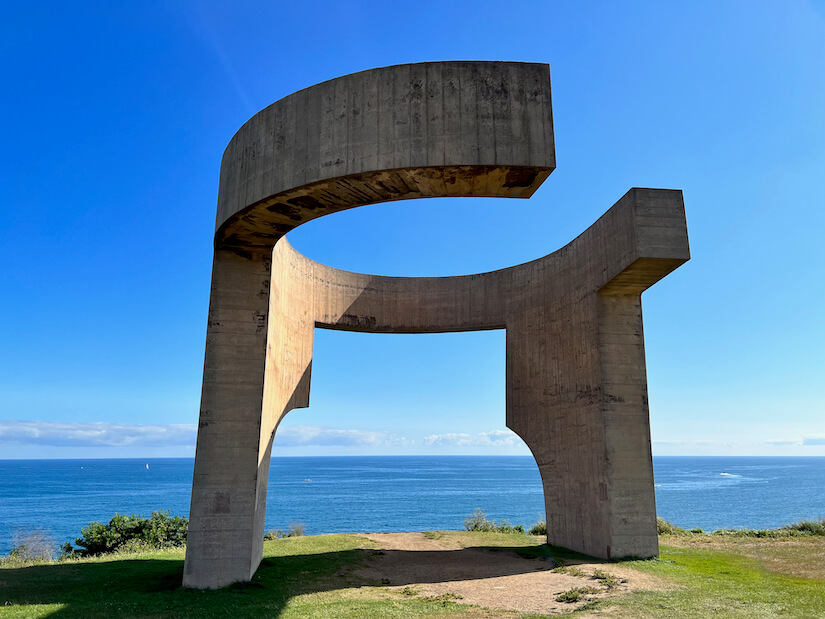 Personally, I’m a big fan of cities where the beach is one of the attractions, as I love mixing days of culture and exploration with the chance to feel the sand between your toes. And for this alone, Gijón wins big points with me. Playa de San Lorenzo is a fantastic stretch that curves around the city from its more modern centre to its old town. There are plenty of beach bars and nearby restaurants to choose from, plus a long promenade, a favourite with locals on their morning jog. 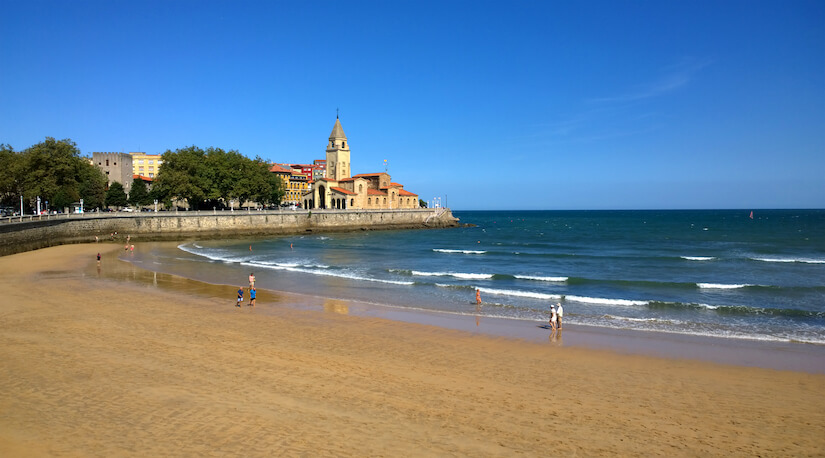 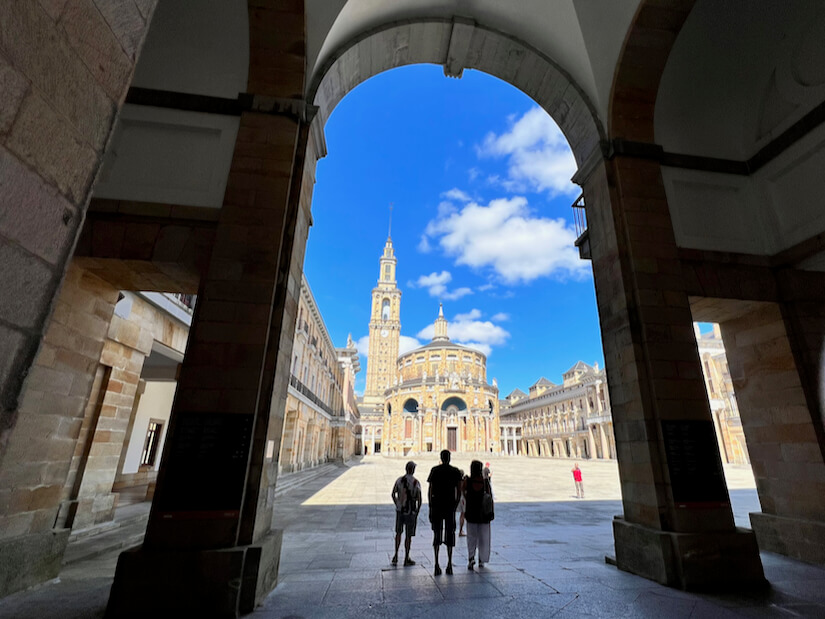 Take a trip around 15 minutes drive outside Gijón for a less-than-usual attraction full of history. The Laboral Ciudad de la Cultura is said to be the largest building in Spain at over 270,000 square metres. Though I was taken by its many architectural highlights – from towering archways to pointy spires and lofty domes, the colossal spread could point to its origins as it was constructed during the reign of dictator President Franco. 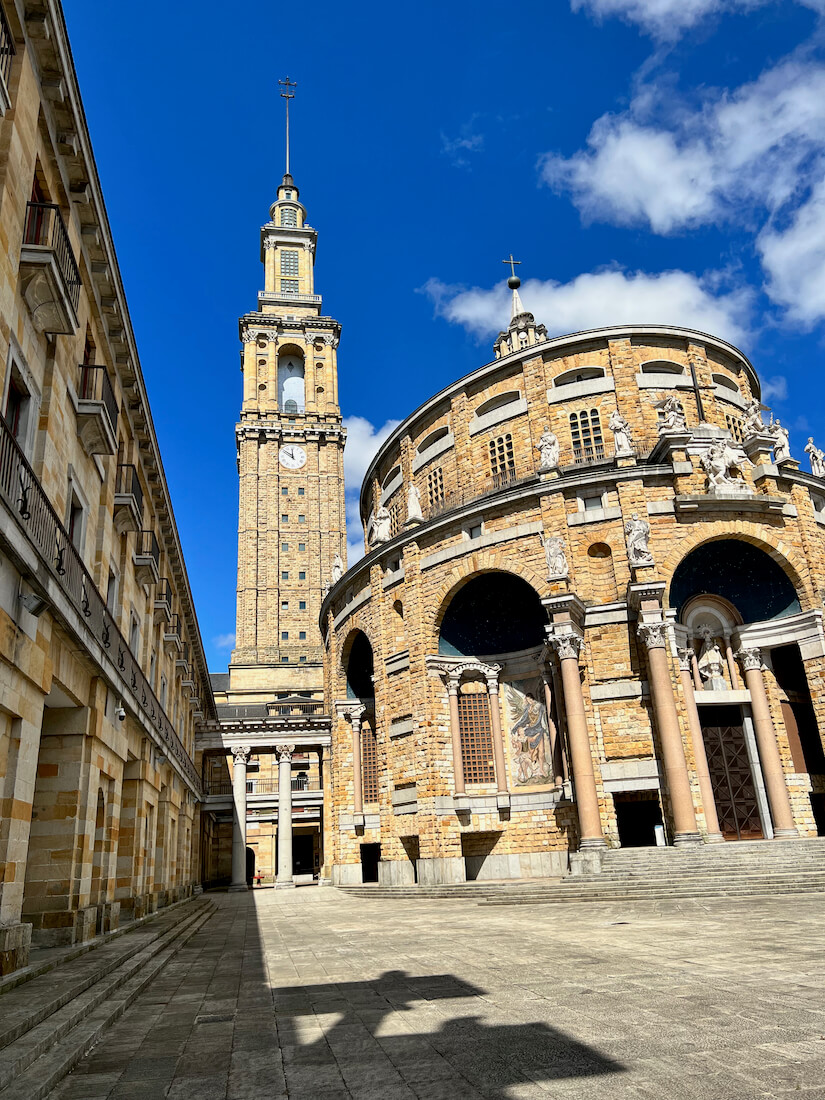 Though today, it houses government offices and hosts cultural events its past weighs heavily. It was originally built as an orphanage for local children – this area of Asturias has a mining past and accidents happened tragically frequently in the mid-20th century – its aim was to offer them a self-contained space, with classrooms, libraries, a church, gardens and a swimming pool within the grounds. 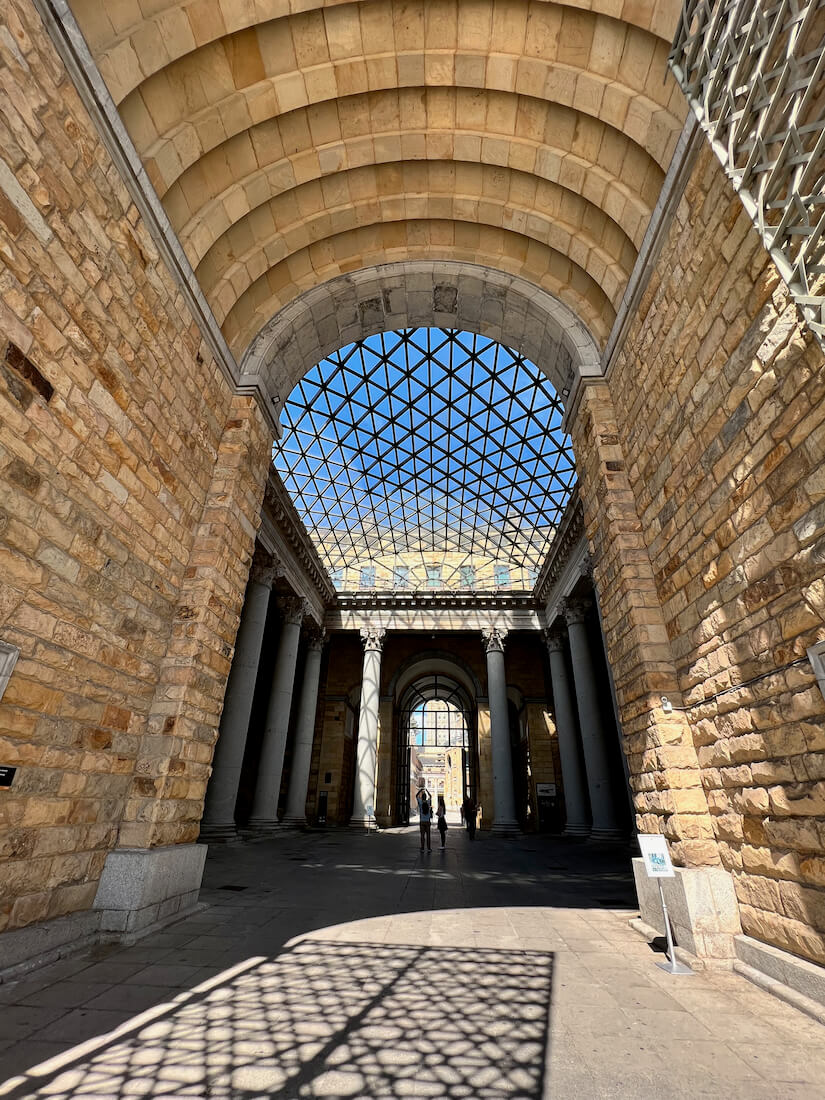 As mining safety improved however, the vast grounds never filled with the number of children that were anticipated to be in need. So when construction stopped in 1957, the site had transformed to become a Jesuit university. When the university closed in 1996, with the nuns that ran it leaving as the building fell into disrepair, it was empty until it was acquired by the local government in 2001.

The building became a point of contention locally due to the heavy cloud Franco and much associated with this period has had on Spain. But despite some calls to have it demolished, it was decided to preserve the building. You can wander the site freely but must book a tour to enter any of the buildings. 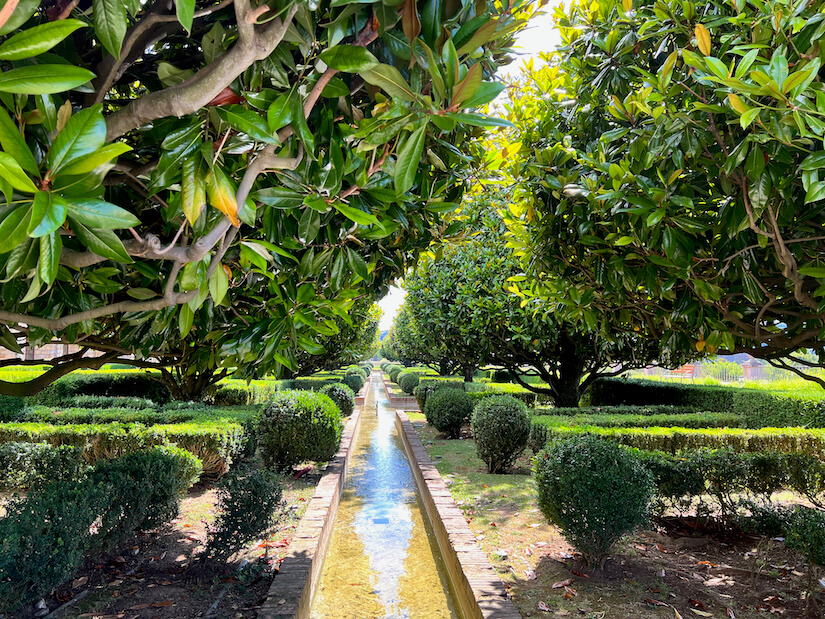 My take – why you should visit Gijón

Small but perfectly formed – Gijón proves that there are many great things to do in Asturias, even in its smaller, lesser-known cities, making it a great place to start your trip in Northern Spain. It’s a lovely, relaxed city in which to unwind for a few days by the sea. It isn’t so big that you’ll find yourself caught up in a rush of urban excitement, but you can stop and breathe and down pace into your holiday time.

Read more on to discover more things to do in Asturias with my guide to Oviedo – coming soon.